The latest market highlights and our views on the key developments as the FOMC leave policy unchanged; markets await the knife-edge BoE policy decision; and fourth quarter US GDP highlights the data calendar

The FOMC surprised nobody by keeping rates unchanged at the first policy decision of the year on Wednesday, maintaining the target range for the Fed Funds Rate at 1.50% - 1.75%; with the Committee voting unanimously in favour of such action.

Policymakers did, however, make a slight, technical adjustment to the interest rate on excess reserves (IOER), hiking IOER by 5bps to 1.60% to ensure that the effective Fed Funds Rate continues to trade well inside the target range.

Comments on both the economic and policy outlook also provided little in the way of surprises, though a subtle shift in the FOMC's language was notable. Economic activity was again described as rising at a 'moderate rate', however the assessment of household spending was downwardly revised from a 'strong' to a 'moderate' rate.

Barring this, the statement was largely unchanged: 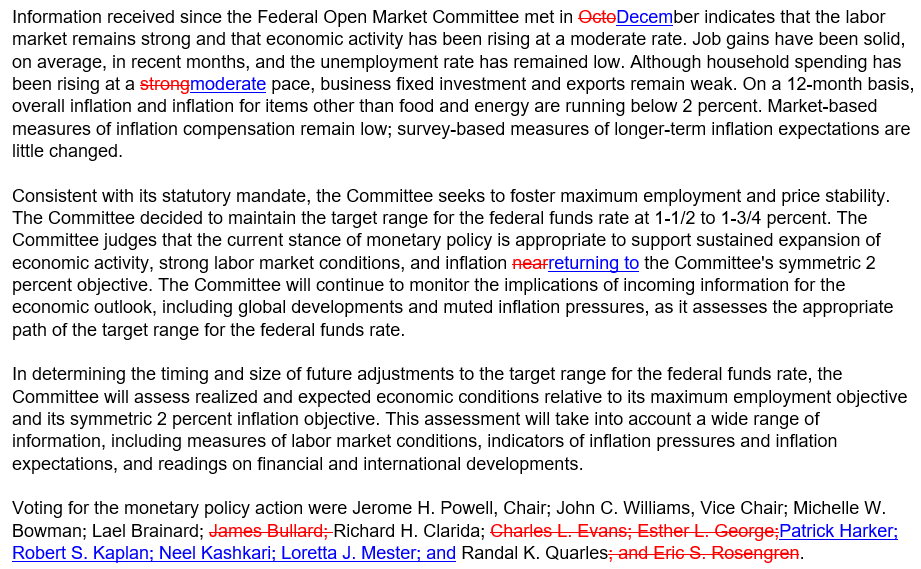 Meanwhile, the Fed's policy outlook remains largely unchanged, namely that rates are set to remain at their present levels for the foreseeable future, with the policy stance continuing to be described as 'appropriate'.

Despite this, Chair Powell struck a slightly more dovish tone at the post-meeting press conference, signalling that policymakers are 'not comfortable' with inflation running persistently under 2%. Any near-term policy changes are, however, still unlikely.

Turning to the balance sheet, the FOMC confirmed that repo operations would continue through the end of April, however -- as clearly stated by Powell -- these operations are in order to raise the level of reserves in the system, and are not the 'stealth QE' that some in the market believe them to be.

For the dollar, the FOMC meeting saw the greenback pare its intraday gains, settling flat against a basket of peers.

Away from the Fed, the now daily check on the status of the coronavirus outbreak shows the number of cases continuing to increase, with China now confirming just over 6,000 persons infected.

It is, however, worth noting that China appear to be expecting a significant hit to growth from the coronavirus outbreak, with Reuters reporting the Chinese government warning that growth may dip below 5% in the first quarter. The fact that such a warning is being given so early indicates the scale of the impact that the outbreak is likely to have on the economy; and raises the chances of further fiscal and monetary stimulus from Beijing.

Despite this, sentiment has stabilised after the panic seen in the early part of the week, resulting in reduced bids for safe-haven assets. In FX, this resulted in rangebound trading for the haven Japanese yen, as well as the Swiss franc, with both ending the day largely unchanged. 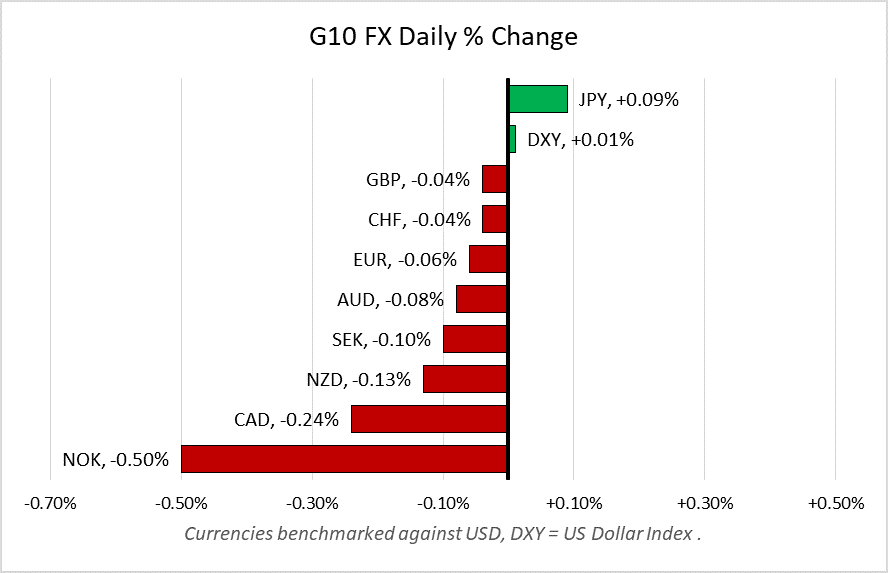 In other asset classes, global equity markets continued to rebound. In Europe, the pan-continental Stoxx 600 ended the day 0.5% higher, while the US benchmark S&P 500 ended the day unchanged.

Oil prices were more mixed. Global benchmark Brent settled just shy of 0.5% higher, however US WTI crude shed 0.3% -- falling for a 6th day in 7 -- as a result of a larger than expected build in US stockpiles.

Meanwhile, despite the improvement in sentiment, bond yields declined, with the 10-year Treasury yield dipping 4bps in reaction to the FOMC's policy decision.

After 6-and-a-half years at the helm, Bank of England Governor Mark Carney makes his final policy announcement at the Bank this lunchtime, with the decision being an incredibly close one to call.

Markets see the decision as a coin-flip, pricing a roughly even chance of a rate cut, with bets on looser policy having been spurred on by a host of dovish comments from external MPC members, and soft economic data before December's general election. 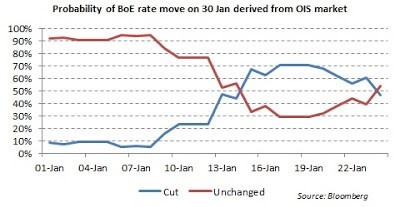 This pricing, however, seems somewhat overdone, especially given the significant post-election pick up in the crucial flash January PMIs and a host of other sentiment surveys. The below presents a comparison of recent economic indicators, with it being important to note that the 'dovish' indicators reference the economy pre-election, and the 'hawkish' indicators reference the economy post-election. 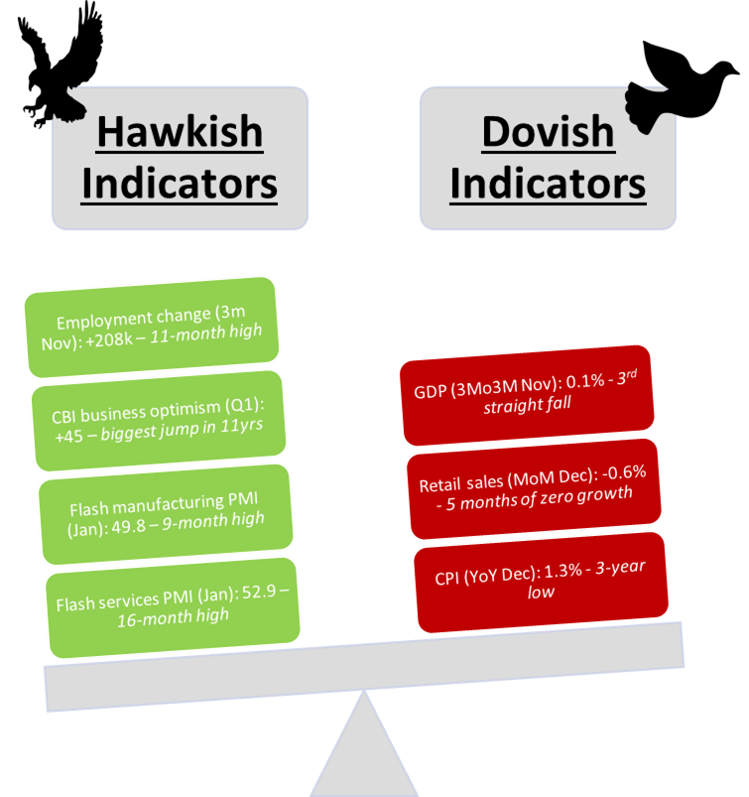 Taking this into account, it would appear prudent for policymakers to take a 'wait and see' approach, firstly in order to judge whether the recent bounce in the economy will be sustained, but also to assess the impact of the expected fiscal stimulus in the March budget. Furthermore, with policy headroom severely limited after a decade of near-zero rates, the BoE should save their policy ammunition for when it is really needed.

Therefore, my base case -- to which I assign a roughly 70% probability -- is for the BoE to leave the Bank Rate on hold at 0.75%, however external MPC member Vlieghe is likely to dissent in favour of a rate cut, resulting in a 6-3 vote split among the 9-member MPC. Despite the likely unchanged policy, the BoE are expected to strike a more cautious tone, likely indicating that rates could move 'in either direction' depending on how the economy evolves.

However, there is a not insignificant risk that the BoE do decide to loosen policy this lunchtime, likely citing uncertainties over the post-Brexit UK-EU trading relationship, in addition to flagging concerns over the ongoing subdued pace of inflation.

Should the Bank rate be cut by 25bps, back to 0.50%, the market reaction will depend on the MPC's forward guidance. Should the decision to cut be by a narrow majority, say a 5-4 vote split, and the BoE indicate that it is a one-off, 'risk management' move, sterling downside would be limited.

Should a cut be announced, a 'one & done' message is the most likely scenario.

In the unlikely event that a significant majority votes for policy loosening, and the MPC indicate further cuts may be on the horizon, sterling would come under significant pressure -- however the policy outlook may change once incoming Governor Andrew Bailey takes over.

Whatever the policy decision, Governor Carney will host a press conference after the meeting, explaining the policy action in more detail, and posing a further risk for sterling.

In conclusion, it is somewhat fitting that the unreliable boyfriend -- a nickname that Carney has failed to shake off ever since that infamous Mansion House speech -- known for somewhat sketchy forward guidance, is signing off from the BoE with a knife-edge policy decision, and markets as in the dark about the policy outlook as at any point in recent memory.

So much for clear forward guidance, eh?

Across the pond, today's data highlight comes from the US, in the form of the 1st estimate of fourth quarter GDP growth.

On an annualised QoQ basis, the US economy is set to have expanded at a healthy clip, 2.1%, unchanged from the growth rate seen in Q3. 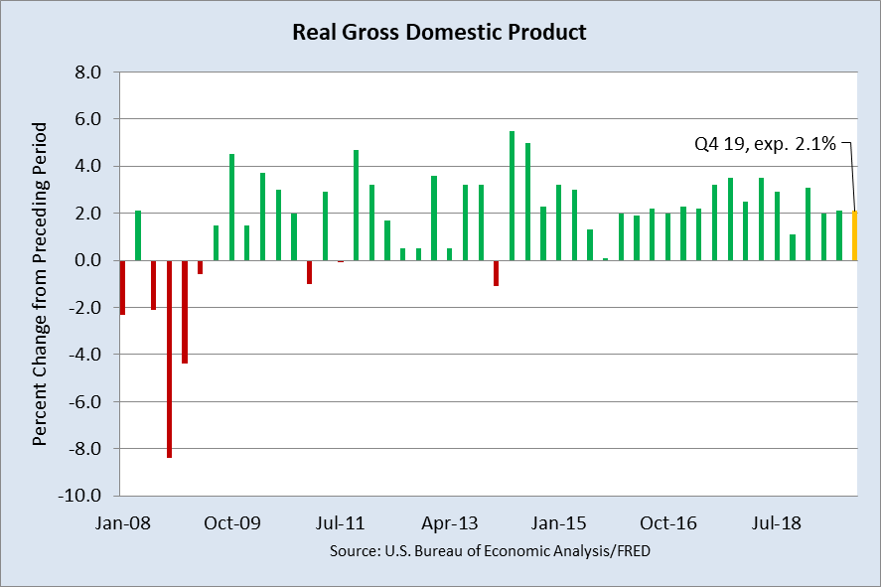 As I've mentioned several times before, the primary factor propelling US economic growth remains consumer spending, which is likely to continue rising at a healthy rate - supported by relatively low inflation and a healthy labour market.

However, investors will likely pay close attention to the details of the report, particularly searching for any signs of a pick-up in business investment, as well as any improvement in the health of the manufacturing sector. Either would be a welcome boost to the US economy, and would take some of the burden of prolonging the expansion off of the consumers' shoulders.

For the dollar, and the monetary policy outlook, anything but a cataclysmically poor report will likely have little impact; with the greenback trading in line with shifts in risk appetite, and the FOMC set to leave policy unchanged for the remainder of the year.