The latest market highlights and our views on the key developments as risk appetite sours into the weekend; the dollar has its worst week in a decade; sterling surges by the most in more than 40 years; and the coronavirus pandemic is set to remain front and centre this week.

Another memorable and unforgettable week drew to a close on Friday with investors pulling out the classic defensive playbook, with - unsurprisingly - nobody wanting to be long risk into the weekend.

Of course, investors continue to monitor the progress of the coronavirus pandemic, with more than 700,000 cases now confirmed globally. 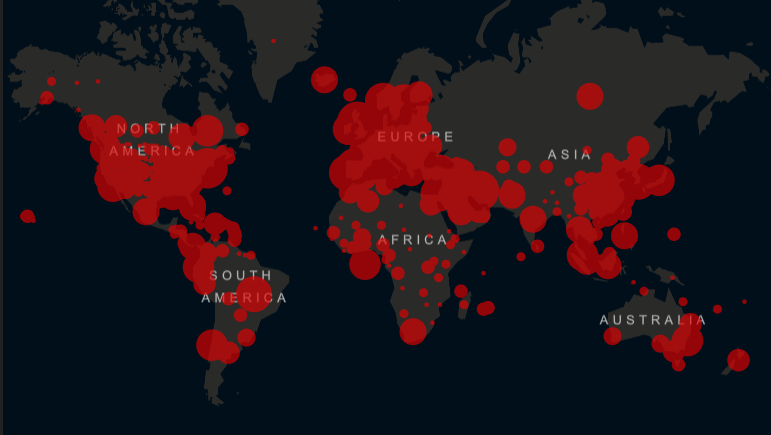 More worryingly, the number of cases continues to increase exponentially, having roughly doubled since last weekend. Furthermore, and as the above map shows, the epicentre of the pandemic continues to move westwards; from China, to Italy & Spain, and now on to the USA.

In fact, the trajectory of the US' infection curve is particularly worrying. Cases are doubling almost every two days, and deaths are sadly doubling every three days. 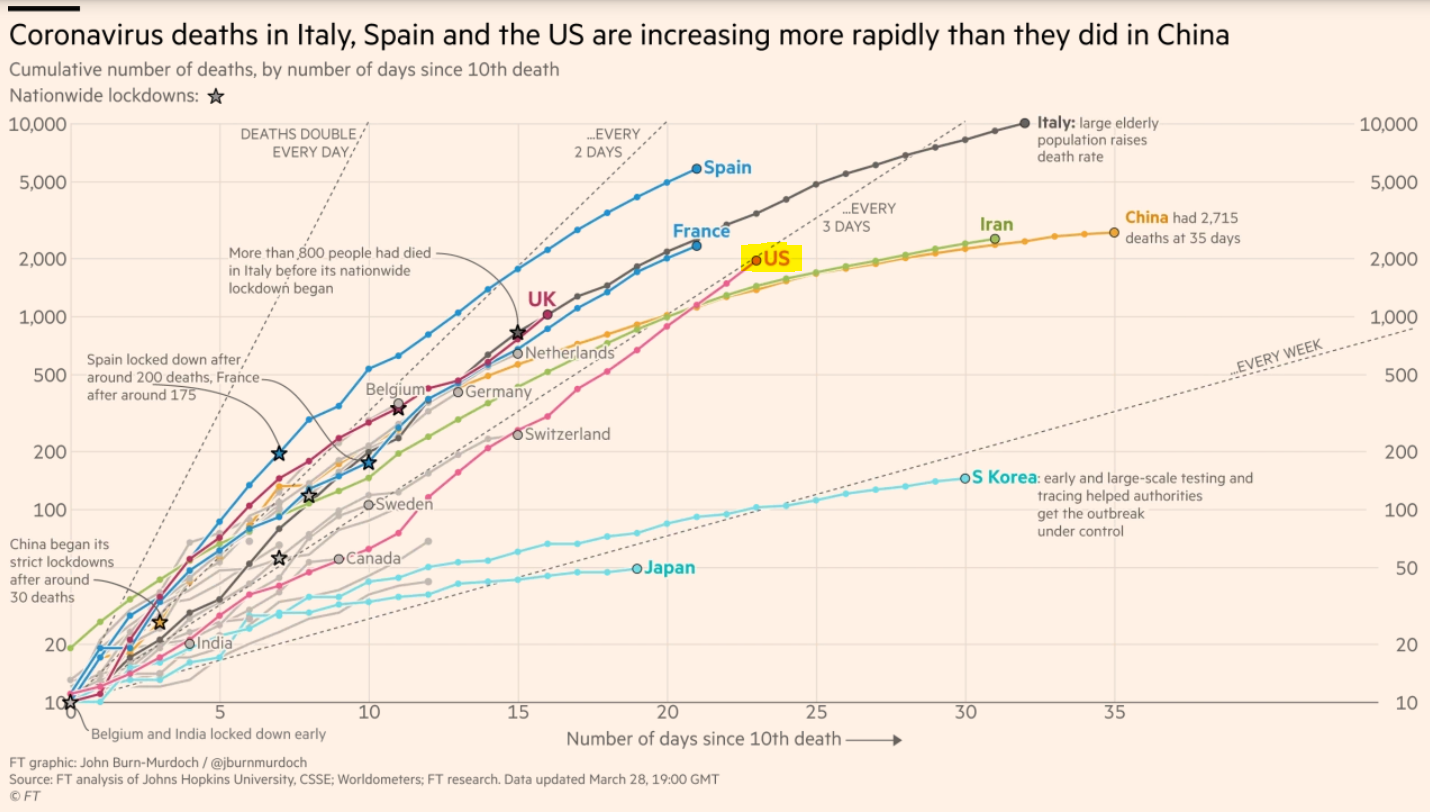 Meanwhile, here in the UK, coronavirus has struck right at the heart of Government, with Prime Minister Boris Johnson and Health Secretary Matt Hancock having tested positive for the disease; and the Chief Medical Officer Chris Whitty isolating with symptoms of covid-19.

As the impact of the virus continues to grow, so do the policy responses to it:

Nonetheless, and despite the significant stimulus and relief measures already put in place, the choice facing governments across the world is stark - the more stringent containment measures are put in place, the steeper and deeper the resulting recession will be.

Investors are also pondering the same question, and paused for breath on Friday after an impressive, three-day risk rally.

As a result, equity markets on both sides of the Atlantic ended Friday deep inside negative territory.

In Europe, the pan-continental Stoxx 600 ended the day more than 3% lower, with all major bourses chalking up steep losses. 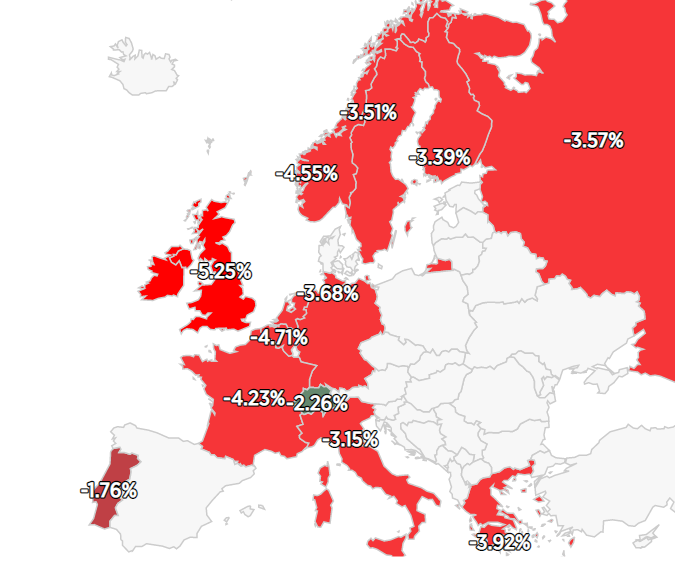 In spite of Friday's losses, the broad-based index did chalk up its best weekly gain since 2011, adding more than 6% in the past five days. London's FTSE 100, meanwhile, shed 5.25% on Friday, though still finished the week in the green.

Across the pond, US markets also declined, with the benchmark S&P 500 ending the day 3.4% lower, remaining inside bear market territory despite gaining more than 10% on the week - the index's best week since March 2009.

Volatility was also elevated on Friday, with the VIX gaining around 4.5 points, rising to 65.5 - indicating expectations for a roughly 4.3% daily move. As the below chart shows, despite the recent rally in stocks, the VIX remains close to its highest levels in a decade.

As a result, and with the number of coronavirus cases continuing to increase, I am inclined to call last week's moves a bear market bounce - rather than a bear market bottom.

Meanwhile, Treasuries also caught a bid on Friday, benefitting from the souring in risk sentiment. Benchmark 10-year yields settled 13bps lower on Friday, back below the 0.7% handle, while yields at the short end of the curve fell by around 5bps.

The resulting bull flattening of the yield curve is a sign that the market may, once again, be beginning to price in additional policy easing from the Fed. As a result of the curve flattening, the 2s10s spread has now come in to around 42bps, its narrowest in a couple of weeks.

Sticking with Treasuries, negative yields have returned to the US for the first time in four years, with 1- and 3-month bill yields dipping into negative territory last week as a result of the huge clamour for incredibly liquid, incredibly safe, cash-like assets among market participants. This creates a phenomenon where - as the Treasury can't sell bills with a sub-zero yield - primary dealers can buy short-term debt at a 0% yield, and immediately flip them in the secondary market for a quick, tidy profit.

Turning to G10 FX, and the dollar continued to weaken on Friday, a sign that the Fed's unprecedented liquidity measures appear to have finally got on top of the funding squeeze that dominated the narrative a couple of weeks ago.

Against a basket of peers, the dollar shed more than 1% on Friday, rounding out its worst week since March 2009. Furthermore, the dollar index now stands at a 2-week low, well below the 100.0 handle, and at roughly the level seen when funding pressures originally emerged.

The primary beneficiary of the dollar's ongoing weakness has been the pound, which gained more than 2% on Friday despite risk sentiment souring significantly. This represented sterling's fourth straight day of gains against the greenback, and pushed cable to its best week since the Bretton Woods system was abolished in 1971, having surged almost 7% last week.

All other majors were also able to take advantage of the weaker dollar, with even the Canadian dollar gaining ground despite the BoC's emergency rate cut. Unsurprisingly, as the below scorecard shows, Friday's best performers - barring the pound - were the Japanese yen and Swiss franc, with both currencies benefitting from solid demand for safe havens. 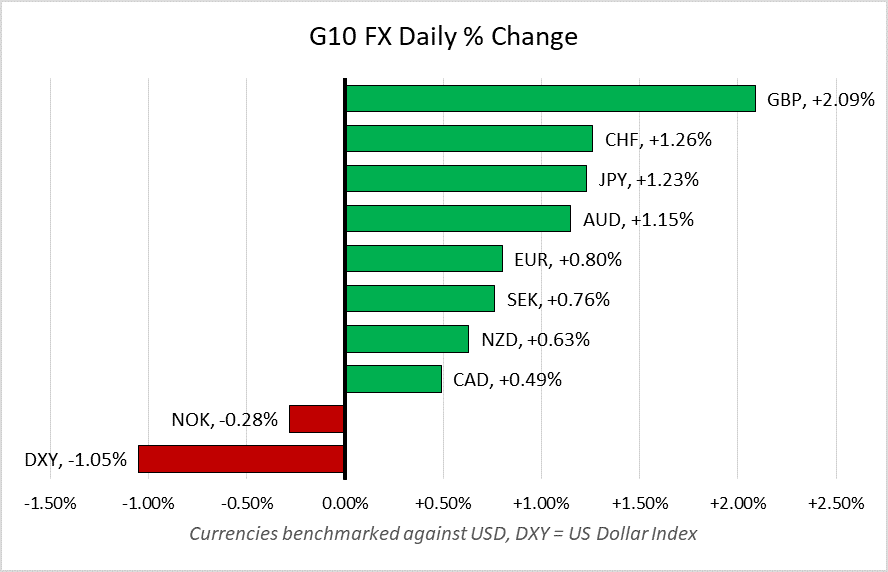 Finally, turning to commodities, oil prices were once again on the slide on Friday, as concerns over both evaporating global demand and the ever mounting oversupply issues exerted significant pressure on prices. Both global benchmark Brent and US WTI crude settled around 5% lower; while an obscure grade of crude - Wyoming Asphalt Sour - has actually dipped into negative territory (ie the producer paying people to take the oil away) due to such a lack of demand.