The latest market highlights and our views on the key developments as risk sentiment remains pressured by coronavirus concerns; German sentiment figures disappoint; and a busy slate of US data awaits

At the moment, to be an effective market analyst, it would help to have a medical background, given that markets continue to be driven by ongoing fears over the Chinese coronavirus outbreak.

As with Friday, G10 FX struck a classic risk off tone as a fresh week got underway yesterday, with investors somewhat spooked by the scale of the outbreak; with infections in China now numbering almost 3,000and sporadic other cases being reported in numerous countries.

As a result of the risk averse tone, FX safe havens remained well-bid. This saw the Japanese yen end the day 0.3% higher, while the Swiss franc added 0.2%. The dollar was also well supported, with the greenback ending the day 0.1% higher against a basket of peers.

Conversely, the risk sensitive antipodeans once again struggled. The kiwi dollar ended the day 0.7% lower, touching a more than 1-month low against its US counterpart. The Aussie dollar also faced headwinds, losing a touch less than 1% on the day, languishing at a 3-month low against the greenback.

Yesterday's full scorecard is below; 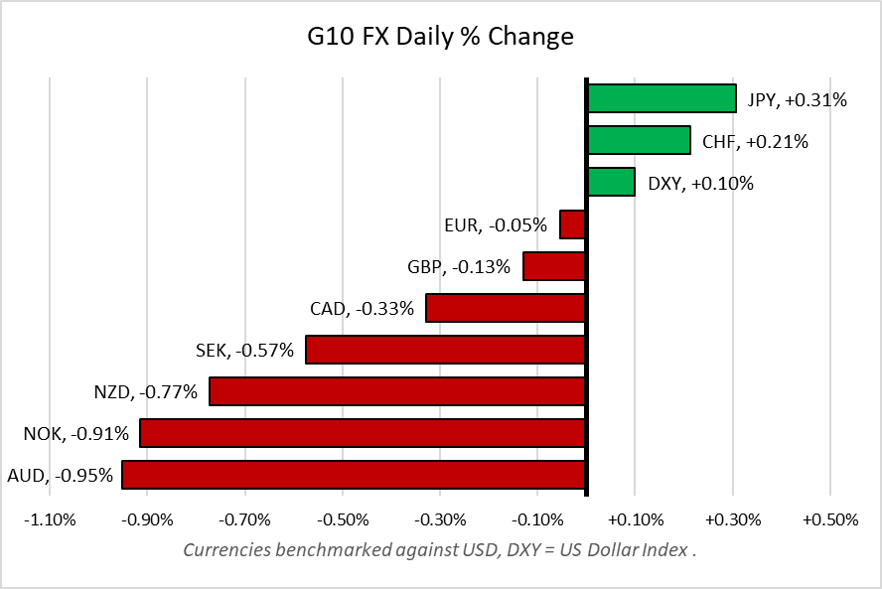 Of course, the risk aversion was not limited to FX. In fact, volatility was greater and risk-off sentiment significantly more pronounced in other asset classes.

Starting with equities, markets tumbled across the world yesterday, with investors primarily concerned about the potential significant hit to global growth as a result of lesser Chinese demand. In Europe, the pan-continental Stoxx 600 ended the day 2.25% lower; with 581 of the index's component stocks ending the day in the red.

In contrast, gold prices surged to a 3-week high as part of a rotation into safer climbs, with the precious metal ending the day around 0.5% higher.

Bond yields also fell, signifying increasing demand, with the US 10-year yield falling 8bps to 1.61%. This decline, especially demand at the long end of the curve, resulted in spreads narrowing, with the 2s10s spread now standing at just 16bps.

Somewhat surprisingly, given the recent removal of significant uncertainties from the economic outlook, the business climate indicator fell to 95.9 in January, down from last month's solid 96.3. 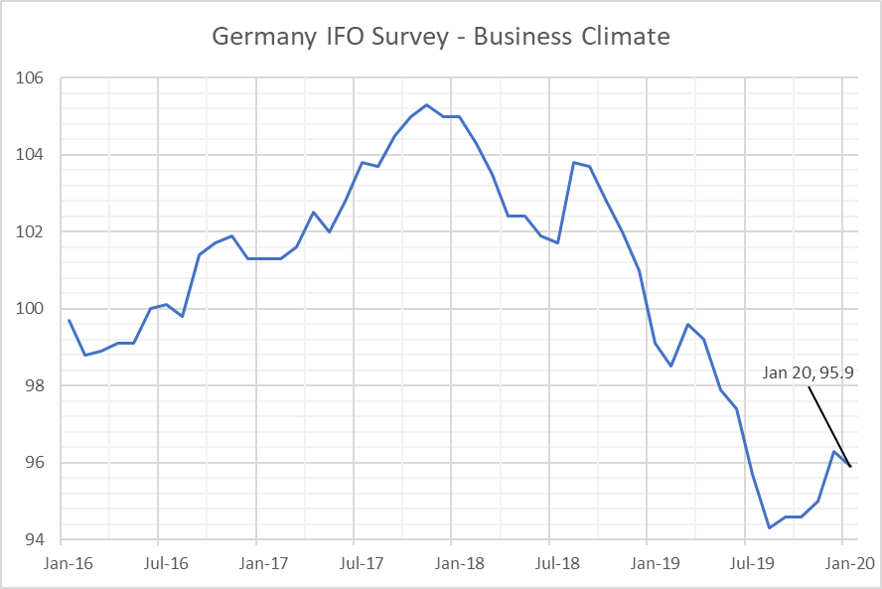 The fall in sentiment dragged the euro a touch - around 0.1% - lower, however provides a good example of why sentiment surveys should always be taken with some scepticism, with the follow-through impact on 'hard' data always the primary concern of market participants.

Across the pond, a couple of notable second-tier data points were released, though both failed to generate significant volatility:

Today's first highlight comes in the form of December's US durable goods orders, a useful leading indicator for the presently subdued manufacturing sector.

Headline orders are expected to rebound from November's disappointment, with an MoM increase of 0.5% expected. 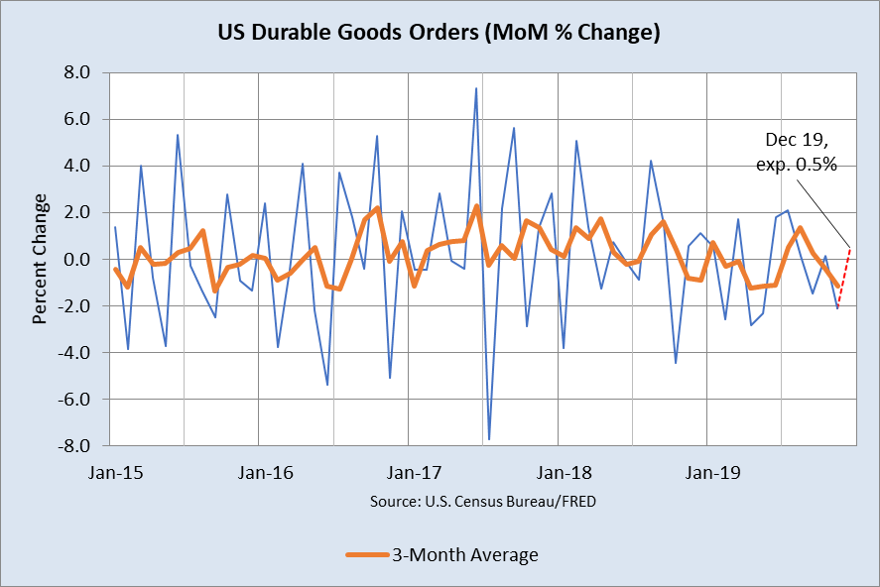 A word of caution on the latter, however, is that the excluding-transport orders measure will likely continue to be dragged lower by the ongoing production slowdown affecting Boeing.

Nonetheless, the increasing orders bode well for the struggling US manufacturing sector, with a greater volume of orders a positive leading indicator for future output from the production sector. An uptick in industrial output would be a welcome boost to the US economy, and take a significant burden off of the consumers' shoulders.

Speaking of the US consumer, markets will get their latest read on consumer confidence this afternoon.

The Conference Board's confidence index is expected to tick higher to 128.0 in January, a healthy increase as 2020 gets underway. 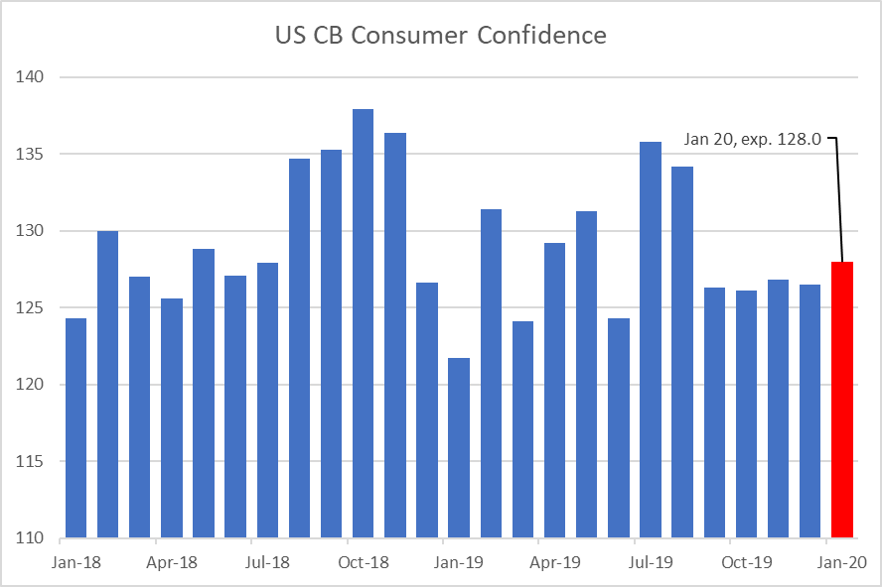 Of course, as flagged numerous times before, the US consumer is the primary - if not only - factor underpinning the present US economic expansion. Hence, a solid level of consumer sentiment, and the likely increase in spending that will result, should prolong the present expansion for some time to come.

Here’s a selection of other notable events to keep an eye on today: