The latest market highlights and our views on the key developments as Chancellor Sunak announces an unprecedented stimulus package; sentiment sours into the weekend; and investors continue to track developments in the coroanvirus pandemic.

No reader of this Note needs me to tell them that we are living in truly unprecedented times, though the speed of the change from 'normal' life to this 'new normal' has been incredibly abrupt.

In fact, as little as seven days ago, where the world is now - with strict restrictions on movement in nearly all Western nations - was unimaginable.

Of course, the restrictions are necessary to ensure the ongoing coronavirus pandemic can be brought under control, especially as the number of confirmed cases continues to rise, now exceeding 300,000 globally.

There is, however, a glimmer of good news. Approximately 100,000 people worldwide are now known to have recovered from the virus, and numerous potential vaccines and treatments are undergoing clinical trials.

Meanwhile, policymakers continue to look for innovative ways which can prevent the ongoing public health crisis from spiralling into a financial crisis, or even from triggering an economic depression.

Here in the UK, Friday saw Chancellor Rishi Sunak - just five weeks into the job - announce a huge package of fiscal measures aimed at supporting businesses through the epidemic. Chief among these measures was the announcement that, for the first time ever, the Government will step in to pay people's wages.

Sunak announced that any business, no matter how large or small, would be eligible for government grants that would cover 80% of salary (up to £2,500 per month, per employee) for workers kept on payroll, but not working. The scheme will be backdated to 1st March, and will initially last for 3 months.

A host of other measures were also announced, including the deferment of next quarter's VAT payments, an extension of the 'Coronavirus Business Interruption Loan Scheme' for 12 months, and an increase in both universal credit and working tax credit of £1,000 for the next year.

It is incredibly difficult to put into scale how significant the package of measures is, however I can say for certain that, 100 days after winning an 80-seat majority in December's election, the last thing I expected to see a Tory Chancellor doing was effectively nationalising the entire economy.

However, with the coronavirus being the biggest health crisis in a generation, and threatening to precipitate an economic crisis to end them all, such action is wholly necessary.

Across the world, policymakers are also delivering stimulus packages aimed at cushioning - as much as possible - from the crippling effects of nationwide lockdowns which are effectively 'turning off' entire economies overnight.

How will this all be paid for, you ask? Simply, it is too early to tell. However, my hunch is that the extra government debt issued to fund these massive stimulus programmes will be snapped up by central banks. Yes, modern monetary theory, or MMT, has now arrived.

Briefly, it appeared as though timely action from policymakers - on both the fiscal and monetary sides - had calmed markets on Friday; though this calm proved to be short-lived.

In G10 FX, it was another volatile day, especially for the pound, which experienced a rollercoaster day, trading within a whopping 5 big figure range. The pound ended the day 1.6% higher against the greenback, recovering from earlier 35-year lows, though the story of the trading day was anything but simple:

As the dollar's recent strength faded, all other major peers were finally able to find their feet and gain some ground. Friday's scorecard is as follows: 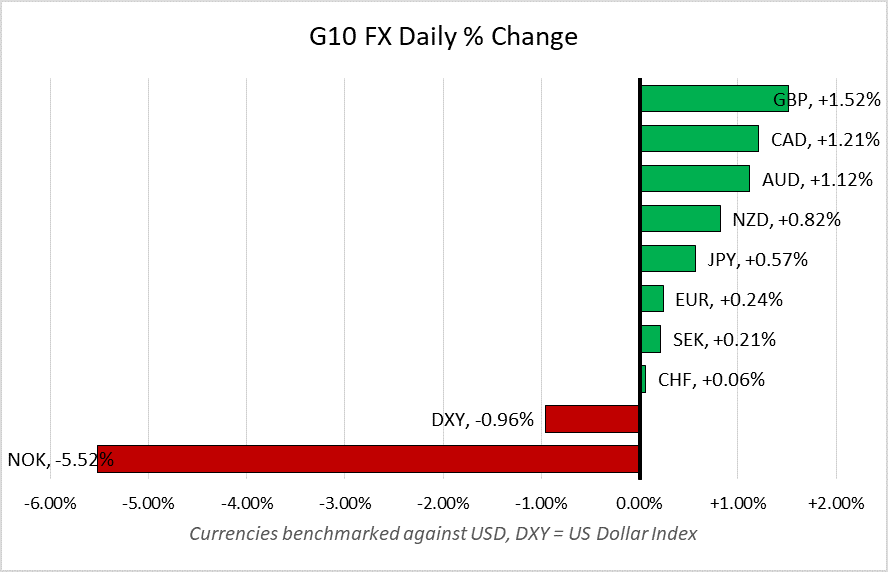 In equities, European markets bounced, despite ongoing lockdowns in France, Italy and Spain, as investors struck an optimistic tone, and sentiment was boosted by the 'whatever it takes' approach to stimulus from the bloc's governments. 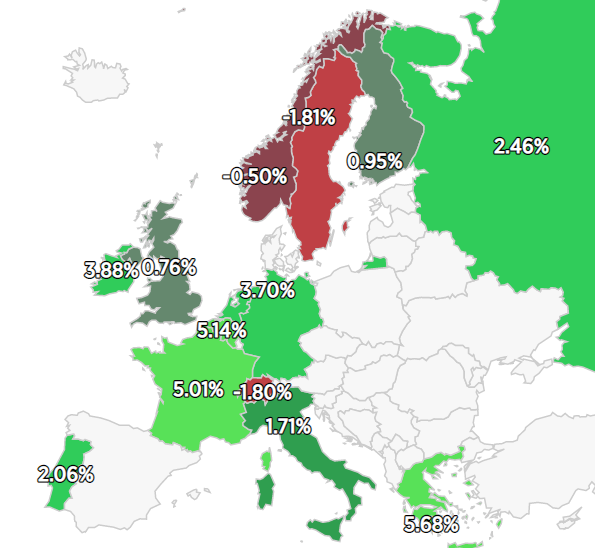 At a broad level, the pan-continental Stoxx 600 ended the day 1.8% higher, with the beleaguered travel and leisure sector leading the gains, up 9% on the day. In London, the FTSE 100 added 0.75%, while Frankfurt's DAX closed 3.7% higher.

Things were, however, less rosy across the pond, where US markets closed out their worst week since 2008 deep in negative territory. The benchmark S&P 500 closed 4.3% lower, chalking up a 13% loss for the week, the index's biggest weekly decline since October 2008.

Meanwhile, the Dow - which, as a price-weighted index, I generally pay little attention to - dipped 4% on Friday, falling below both the 20,000 handle, and the level seen on President Trump's inauguration day. As a President who uses the stock market as his primary success gauge, will this make re-election harder?

In the bond market, yields continued to fall on Friday, as a combination of a continued flight to safety, demand for weekend risk hedges, and the announcement of QE programmes from major central banks depressed yields.

The yield on benchmark 10-year Treasuries settled 18bps lower at 0.89%, while 2-year yields declined by 9bps. This resulted in a modest bull flattening of the Treasury curve, with the 2s10s spread narrowing to around 50bps, still the widest in almost 18 months.

In commodities, gold also saw some buying into the weekend, also as a result of investors looking to hedge some of their risk. Spot prices for the precious metal gained as much as 0.85%, though continue to hover just above 3-month lows.

Finally, oil prices declined into the weekend, as traders continued to fret over evaporating demand and the price-sapping war for market share between Russia and Saudi Arabia that threatens significant oversupply.