The latest market highlights and our views on the key developments as the UK announces a two-pronged stimulus package to tackle the coronavirus; the WHO officially declare the virus a pandemic; and ECB President Lagarde prepares for her first real test at the helm

Co-ordinated stimulus was the order of the day in the UK on Wednesday, as the Bank of England and the Treasury unveiled a range of policies aimed at supporting the UK economy through the temporary shock caused by the coronavirus.

Firstly, on the monetary side, there was no way that outgoing BoE Governor Carney was going to leave quietly, announcing on Wednesday a "big package" of measures, sending a message to investors that the Bank is ready, able and willing to act.

The measures, announced shortly after 7am on Wednesday morning, included:

The rate cut brings the Bank Rate back to a record low 0.25%, a level last seen in late-2017, and sees conventional monetary policy once again approaching the effective lower bound (ELB). 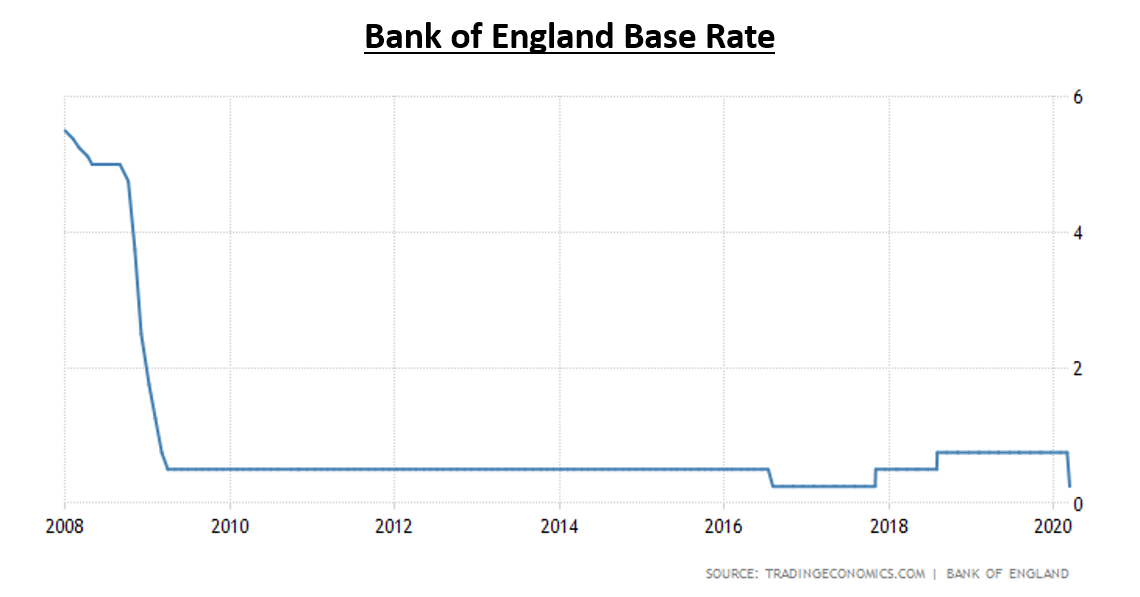 The other policy measures, meanwhile, have been designed in an attempt to ensure that the Bank Rate cut is quickly and effectively transmitted into the 'real' economy, increasing the efficacy of the package despite the Bank's limited policy headroom.

In combination, the two measures will ensure that banks are provided with incentives to make loans to SMEs to help them whether the blow of the coronavirus, while also ensuring that said banks can make these loans within the required capital requirements. Taking into account that -- according to the Governor -- around 75% of SMEs rely on floating-rate loans, the rate cut is likely to have a clear, immediate impact on their finances and cash flow.

The package as a whole is a significant move from the Bank of England, and is a clear statement of intent from policymakers that they intend to get ahead of the curve when it comes to the economic impact of the coronavirus, and provide a significant cushion to the UK economy.

Policymakers also stand ready to loosen policy further, with Carney indicating that the Bank 'will take all necessary further steps to help the UK economy'; though the efficacy of further rate cuts is likely limited owing to the severely limited available policy headroom. Further loosening will likely therefore come through an expansion of the BoE's quantitative easing programme; though the March policy decision is unlikely to bring any further fireworks.

At this point I must credit Governor Carney - of whom I have been a critic in the past - for acting swiftly and decisively to loosen policy and cushion the temporary economic blow of the coronavirus. Carney's experience from the 2008 crisis has clearly proved invaluable.

Meanwhile, Chancellor Rishi Sunak's first budget left observers in no doubt that the Government plan to 'get it done', announcing a whopping £30bln stimulus package aimed at tackling the economic effects of the coronavirus.

The package includes a plethora of targeted measures, including loan guarantees for SMEs, the temporary abolition of business rates, and government funding for statutory sick pay. Also included is a £5bln emergency fund for the NHS, as well as £18bln of additional fiscal loosening to provide additional headroom if necessary.

Other parts of the budget were similarly expansionary, including the highest net public investment - over the course of the next 5 years - in the UK economy since 1955. It is clear that Chancellor Sunak has loaded up his fiscal bazooka to launch everything possible at the UK economy.

It is, however, clear that this significant uplift in spending will be funded by borrowing, rather than by any tax increases, as the below from Sky News shows:

Combined, the stimulus measures are an impressive package - worth well over 2% of UK GDP - that should not only enable the economy to withstand the twin supply-demand of the coronavirus, but which should also juice the wheels of recovery once the initial impact of the virus fades.

The twin-pronged package from the Treasury and the BoE resulted in a roller coaster ride for the pound on Wednesday:

As the above shows, sterling initially shed around 100 pips in the immediate aftermath of the BoE decision, though quickly recovered ground. The swift recovery was as a result of around 46bps of easing already being priced in for the March meeting, hence the market was already primed for a rate cut.

After the brief recovery, sterling reversed course once again, resulting in a steady grind lower throughout the trading day, with the pound ending the day back where it started - somewhat surprising given the significant measures that were announced.

Looking more broadly, it is pleasing to see such a high degree of co-ordination between monetary and fiscal policies playing out in the UK. This co-ordination, given the exhausted monetary policy arsenals of most G10 central banks, is something that should serve as an example to other major economies.

Elsewhere on Wednesday, sentiment was once again shaky, as Tuesday's 'dead cat bounce' evaporated, and haven flows once again became the order of the day.

Of course, sentiment continues to be driven by the coronavirus outbreak - which has now officially (and finally) been termed a pandemic by the World Health Organisation (WHO). The number of cases globally now exceeds 120,000, while the number of new infections in many European nations - including the UK - is now increasing at an exponential rate.

The deteriorating risk appetite meant that haven flows were once again the order of the day, as investors once again rotated away from equity markets and into safer havens, or took funds out of the market altogether, instead choosing to remain in cash.

Starting with equities, Europe was once again a sea of red, with bourses giving up early gains to close firmly in negative territory. 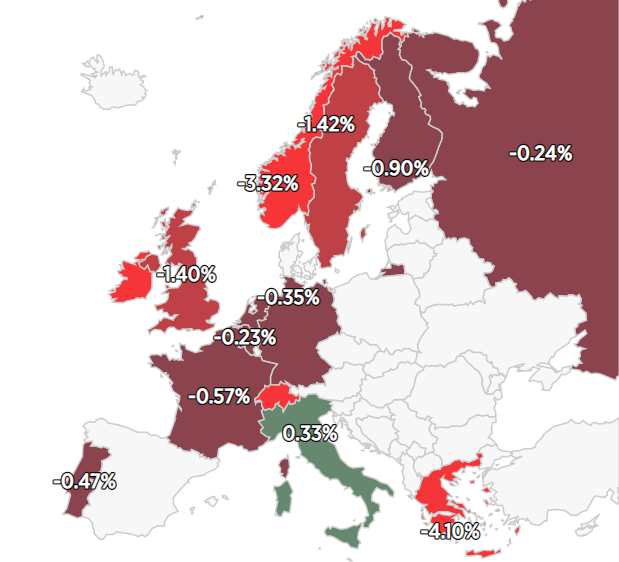 At a broad level, the pan-continental Stoxx 600 ended the day just shy of 1% lower, with travel and leisure stocks - a sector set to be hit hard by the pandemic - leading the losses. In London, the FTSE 100 also shed around 1%, now standing around 25% below its recent highs.

Across the pond, it was a similarly grim picture for US equity markets, with the Dow Jones Industrial Average closing in bear market territory, having fallen more than 20% from its late-February peak.

The benchmark S&P 500, meanwhile, also declined, losing just under 5%, ending the day perilously close to bear market territory (the red dashed line on the below chart).

Volatility, meanwhile, remains elevated, with the VIX remaining above 50, meaning markets continue to expect an average daily move in excess of 3%.

The broad-based sell-off in equities, and the risk aversion sweeping markets, surprisingly failed to result in significant demand for Treasuries, indicative of investors deciding to sit on the sidelines - remembering the old mantra of 'having no position being a position in itself'.

Benchmark 10-year yields, in volatile trading, ended the day 9bps higher, with yields - which move inversely to price - rising across the curve.

Despite the rise in yields, Treasuries remain the haven of choice for investors in these particularly volatile times, and are likely to find a bid once again in the near-term.

The direction of travel for rates is clearly downwards:

Meanwhile, in G10 FX, haven demand was more evident, where the yen found solid demand, though the Swiss franc faced some headwinds amid continued chatter of intervention from the SNB. 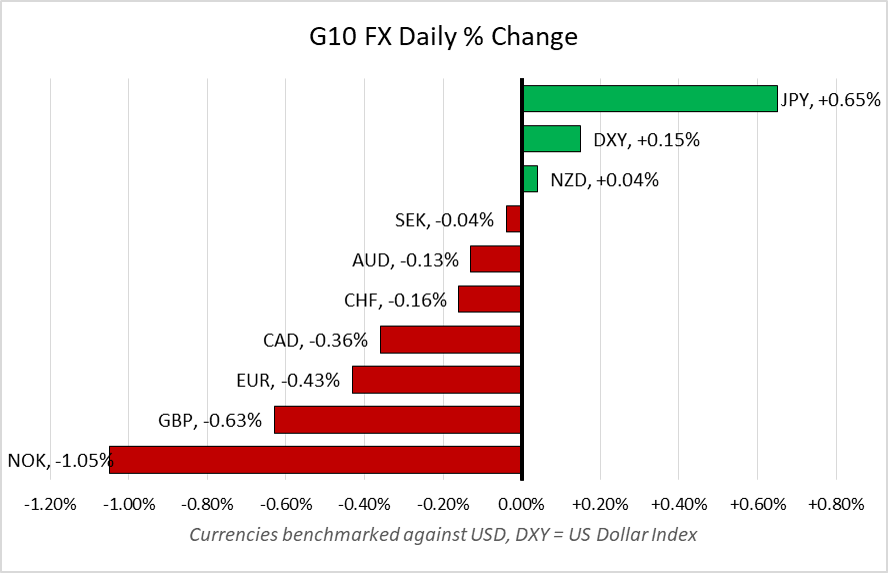 The dollar's advance saw the greenback chalk up its first back-to-back gains against a basket of peers since mid-February.

Meanwhile, in the oil market, prices were once again pressured by the increasing threat of oversupply and the continued drag on demand from the coronavirus. Saudi Aramco - the Saudi state oil company - confirmed yesterday that they would be raising oil output, another sign that the Saudis are now in a price-sapping war for market share with Russia.

As a result, both global benchmark Brent and US WTI crude settled almost 4% lower, also dragging down petrocurrencies.

Finally, gold prices also ticked lower, falling by around 1.4% in the spot market, as traders continued to liquidate positions in order to fund margin calls elsewhere.

It's time for ECB President Christine Lagarde to step up to the plate today, with Lagarde facing her first real test as President at this lunchtime's policy decision.

After emergency cuts from the FOMC and BoE, expectations are high going into the meeting that policymakers will deliver a similar 'shock and awe' strategy.

The choice for Lagarde is simple. Either, as President, she can lead from the front and take charge of the decision, à la Mario Draghi, and get ahead of the curve.

Or, Lagarde can choose to wait, attempting the painstaking process of bringing the whole of the Governing Council onboard, and potentially missing the boat when it comes to delivering easing.

A full preview ahead of today's policy decision can be found here, while a summary of the possible outcomes from today's meeting is below: 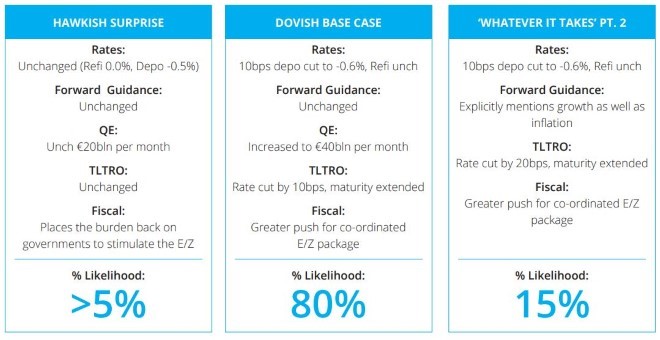 Elsewhere today, sentiment will once again be determined by developments surrounding the ongoing coronavirus pandemic; while the data calendar - barring the weekly US jobless claims figure - is devoid of any major releases.