The latest market highlights and our views on the key developments as sentiment flips on stimulus hopes; PMIs plunge as virus impact becomes clear; and sterling continues to try and recover.

The effect of locking down whole nations and shutting down entire economies is now clear, with Tuesday's 'flash' PMI surveys falling through the floor, painting a clear, but grim, picture of the economic havoc that the coronavirus is wreaking.

In the eurozone, the composite PMI -- which measures output across the economy -- cratered to a record-low 31.4, miles below the 50.0 break-even mark between expansion and contraction. 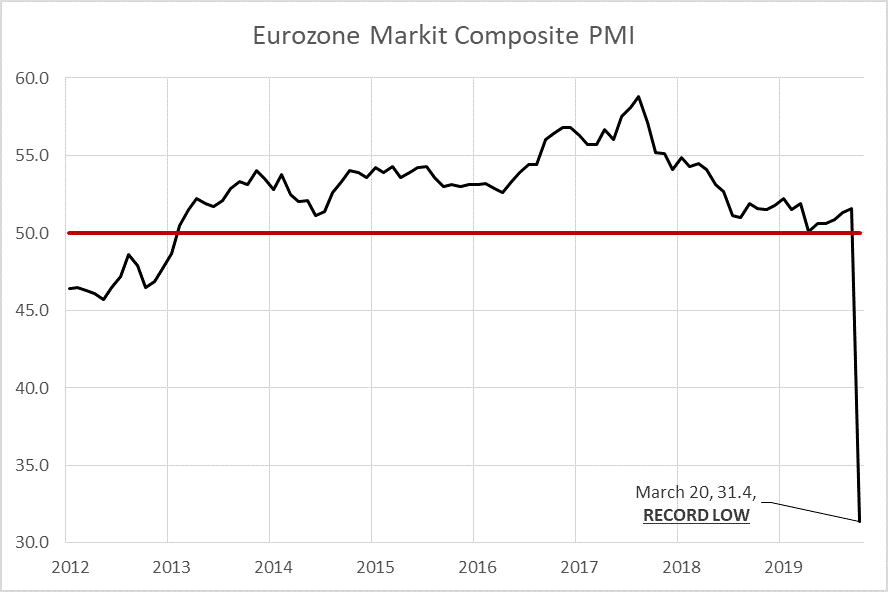 At a sector-specific level, an initial glance would point to the services sector taking the brunt of the virus-linked hit, with the PMI tumbling to an all-time low 28.4 -- lower than at any time during the financial crisis, or the sovereign debt crisis. 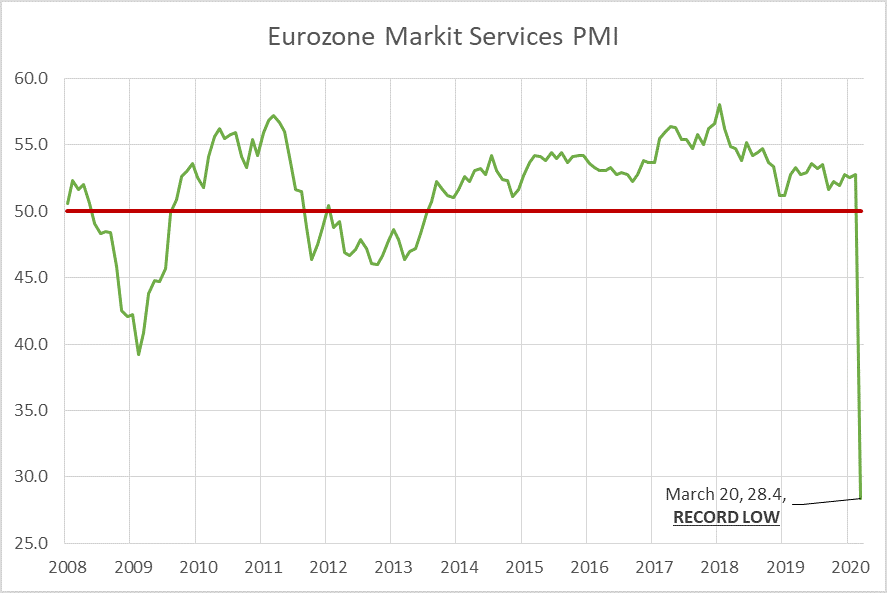 Meanwhile, the manufacturing PMI has once again deceived us, printing an unexpectedly high 44.8. This isn't, however, because the sector has got away lightly when it comes to the virus. Instead, it is due to extended supplier delivery times (as a result of pandemic related shutdowns) artificially inflating the index.

This flaw in the PMI methodology comes as a result of longer delivery times usually being a sign of increasing demand, thus improving conditions, rather than the present cause of the delivery time elongation.

Here in the UK, where Tuesday marked the first day of more stringent measures to control the virus, March's 'flash' PMI surveys also tumbled, though to a slightly lesser extent than the decline seen across the Channel.

At the top level, the composite PMI fell to an all-time low 37.1. 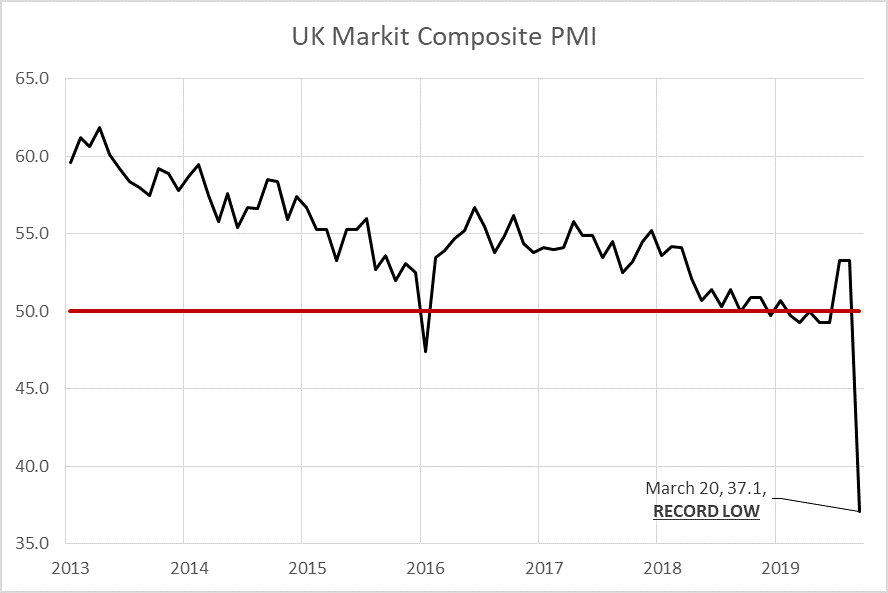 Drilling down, in a similar manner to the figures seen in the eurozone, the services PMI plunged to an all-time low 35.7, while the manufacturing index fell only as far as 48.0. Nonetheless, both indices have now completely wiped out the post-election 'Boris bounce' seen in January and February -- which feel as if they were in another decade! 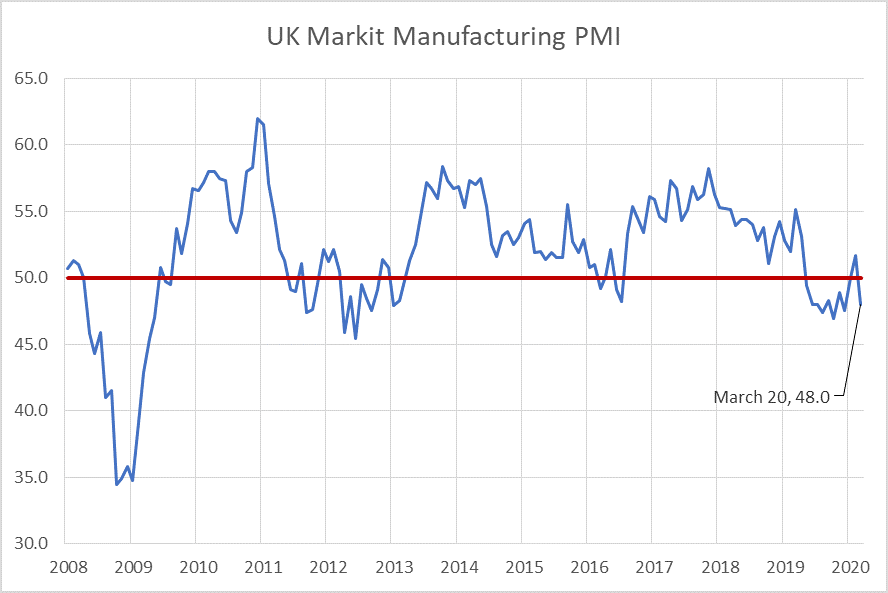 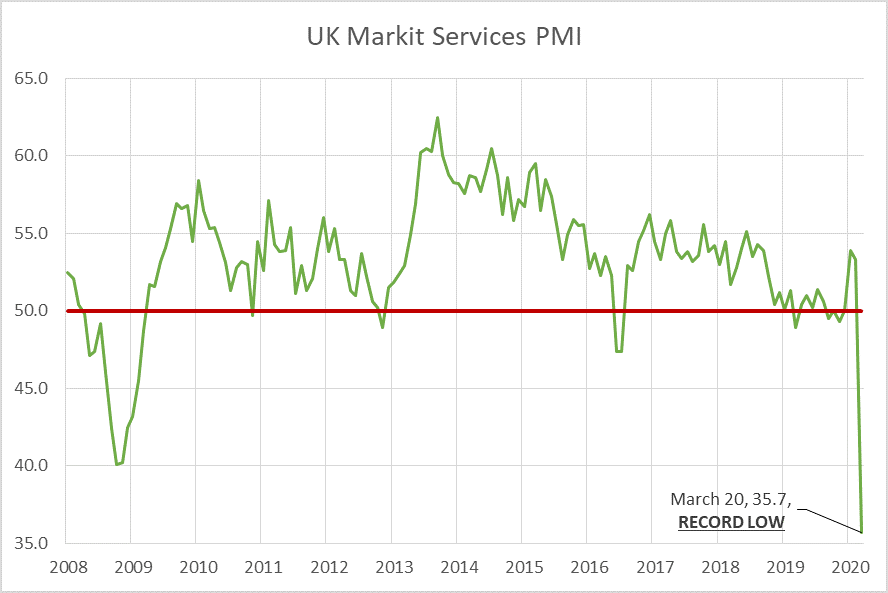 The PMI surveys shouldn't come as a surprise to anyone, however they should serve as a brutal reminder to investors and policymakers alike of the severe impact that the coronavirus pandemic is having, and of the need for significant, targeted fiscal stimulus from those nations which are yet to deliver such measures.

Elsewhere it was 'Turnaround Tuesday', when sentiment began to firm as markets continued to pay close attention to whether the US Congress would pass a coronavirus stimulus bill, and exhibited something of a delayed reaction to yesterday's announcement of unlimited QE from the Federal Reserve.

The QE announcement, along with a host of other liquidity measures announced by the Fed in recent days, appear to finally be working, with the dollar rolling over yesterday, snapping its recent impressive run higher.

Against a basket of peers, the dollar ended the day almost 0.75% lower, as some of the recent funding squeeze that has pushed the greenback higher abated.

As a result of the dollar's decline, and the more positive risk mood, both of the beleaguered antipodeans finally found their feet, gaining around 1% apiece against their US counterpart. Yesterday's full scorecard is below: 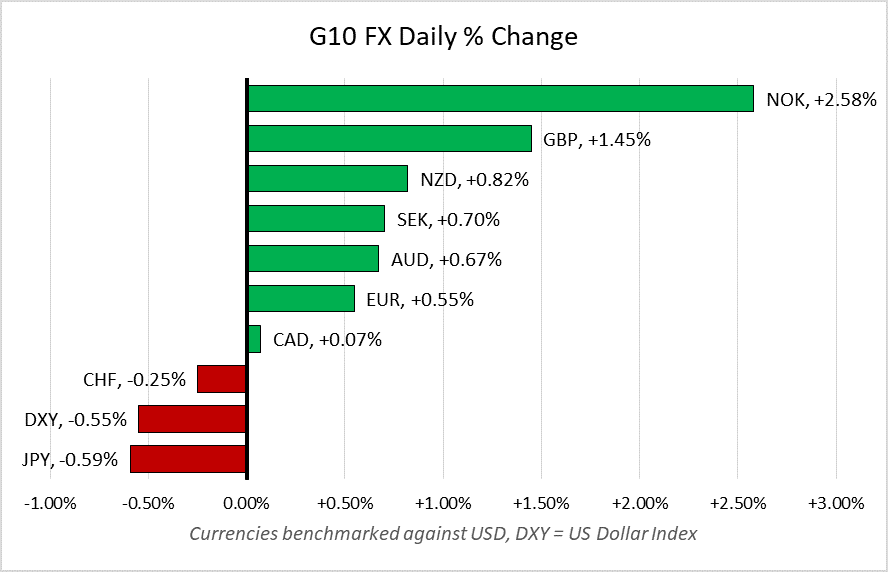 The improving risk environment resulted in European equity markets chalking up their biggest daily gains since 2008, with the continental heatmap being a (rare) sea of green. 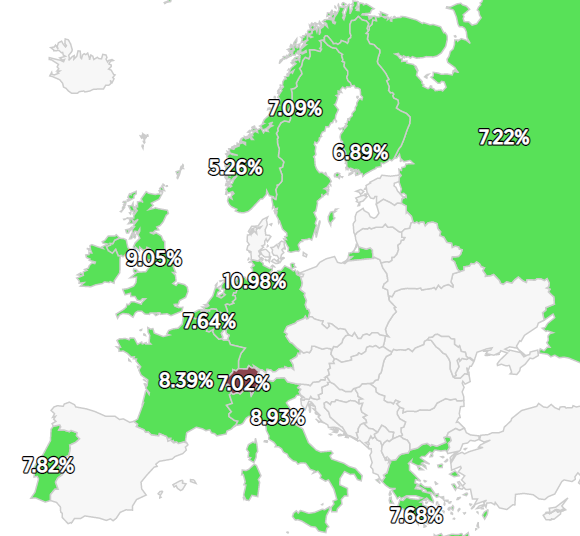 Across the pond, Wall St also enjoyed a day of strong gains; the benchmark S&P 500 closed more than 9% higher, the Dow added 11% (and recorded its biggest one-day gain since 1933), and the tech-heavy Nasdaq gained more than 8%.

The impressive gains saw all sectors end the day in positive territory, as the energy sector led the way higher, and just a handful of individual stocks ended the day in the red. 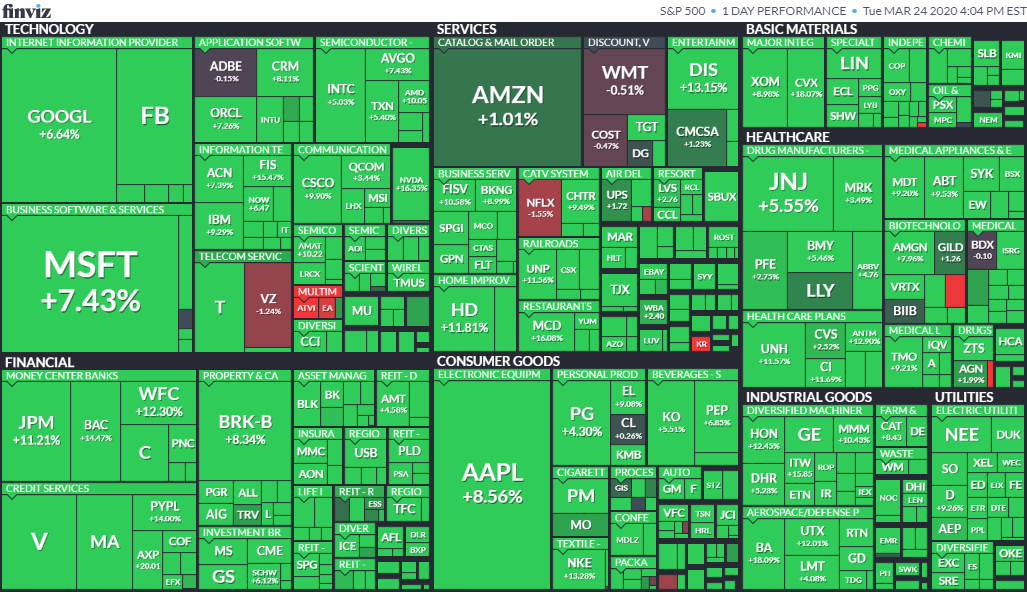 It does appear that the market is attempting to find a bottom, though this cannot be confirmed just yet, especially with further negative coronavirus headlines likely to emerge. Nonetheless, the recent fall in volatility -- with the VIX having fallen 25 points to 60 in the last couple of days -- is promising, however I would prefer the VIX below 50 before becoming more comfortable with such a call.

In the bond market, the improving risk environment and expectations for greater issuance to fund the mooted Congressional stimulus package resulted in higher yields across the curve. Benchmark 10-year Treasuries rose 6bps on the day, rising back above the 0.8% handle, with similar moves seen across maturities.

Meanwhile, oil prices also rose on the back of the stimulus plans, despite continued concerns about oversupply. Global benchmark Brent settled 0.8% higher, while US WTI crude gained more than 2%.

Gold prices also rose as markets digested the recent monster stimulus packages, with the precious metal gaining more than 4.4% in the spot market.

Briefly, I wanted to look at the pound, which appears to have found some solid support and begun to rebound after the brutal, almost 20 big figure, sell-off over the last fortnight.

After cable (GBP/USD) fell to 35-year lows at the tail end of last week, it appears that the pairing may have bottomed both technically and fundamentally.

On the fundamental side; if the BoE stick to their previous guidance, further rate cuts are unlikely given that Bank Rate now stands at the effective lower bound of 0.10%. Meanwhile, the market's fear over more stringent lockdown measures in the UK have now been realised, hence some 'fear of the unknown' should now be priced out.

Finally, a look at the coronavirus itself.

Sadly, global cases now number in excess of 400,000, with the World Health Organisation (WHO) now warning that the US, rather than Europe, is in danger of becoming the new 'epicentre' of the outbreak.

Meanwhile, a number of virus-related headlines continued to flood in yesterday: