The latest market highlights and our views on the key developments as sentiment stabilises despite the ongoing coronavirus outbreak; US data remains firm; and the first FOMC decision of the year comes into focus today

Despite the more positive risk environment, the number of confirmed coronavirus cases continues to increase, with China now reporting more than 4,500 incidences of the disease. Furthermore, person-to-person transmission of the virus has been seen outside of China, with both Germany and Japan reporting such cases. 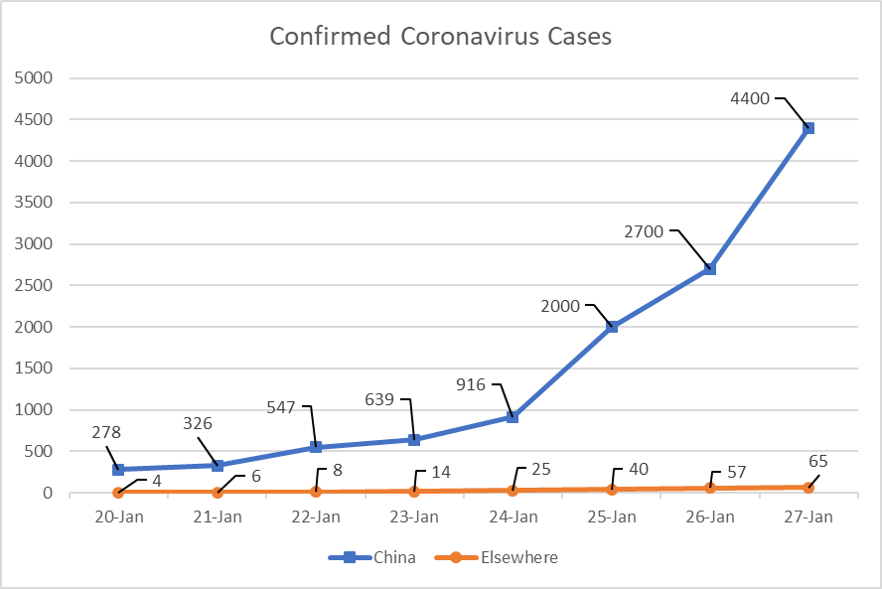 This is, however, to be expected, given that the infection rate of the disease, lack of vaccine and simple maths would point to the number of infections rising before things begin to improve.

Nonetheless, Monday's panicked rotation into safe-havens gave way to a more level-headed trading day yesterday. The dollar remained well-bid, adding 0.2% against a basket of peers to hit its strongest level in almost 2 months.

The solid dollar demand resulted in losses for all other G10 currencies -- barring the loonie, which ticked higher in line with firmer oil prices. 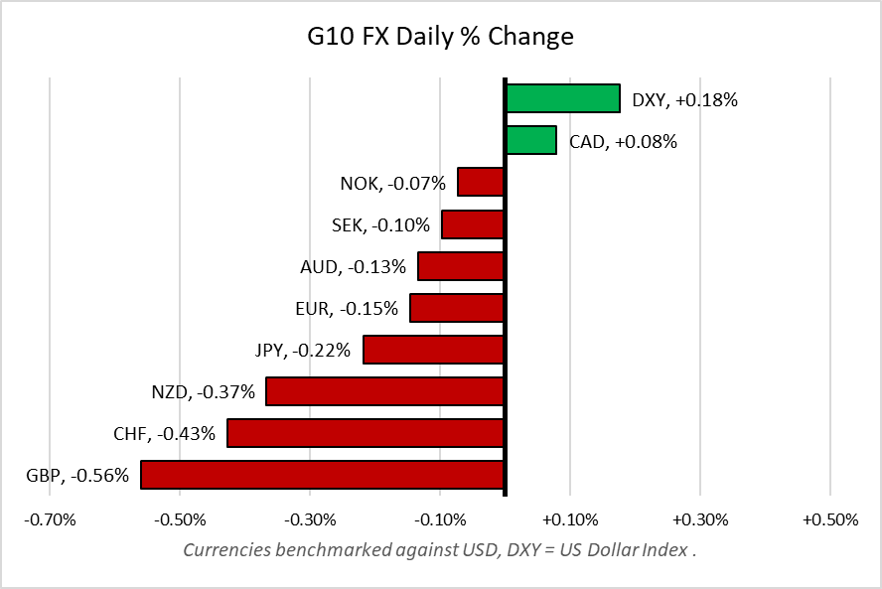 In other asset classes, global equity markets rebounded after Monday’s sell off. In Europe, the pan-continental Stoxx 600 ended the day 0.85% higher. Across the pond, the US benchmark S&P 500 bounced back from its worst day since October, closing 1% higher.

Meanwhile, the reduced demand for safe-havens saw bond yields tick higher. The 10-year Treasury yield added just shy of 3bps, though the 3-month 10-year spread did briefly invert early in the day, for the first time since October.

The lower haven demand was also a slap in the face for the recent gold rally, with the precious metal losing 0.5% and pulling back from a 3-week high.

Elsewhere in commodities, oil prices gained ground after the coronavirus sell off, despite ongoing concerns over demand. Global benchmark Brent settled 0.2% higher, while US WTI crude added 0.6%, with both blends snapping a 5-day losing streak.

On the data front, a couple of notable US points were released on Tuesday.

In the manufacturing sector, December's durable goods orders report painted a mixed picture. At the headline level, orders jumped by the most since August 2018, increasing by 2.4% MoM 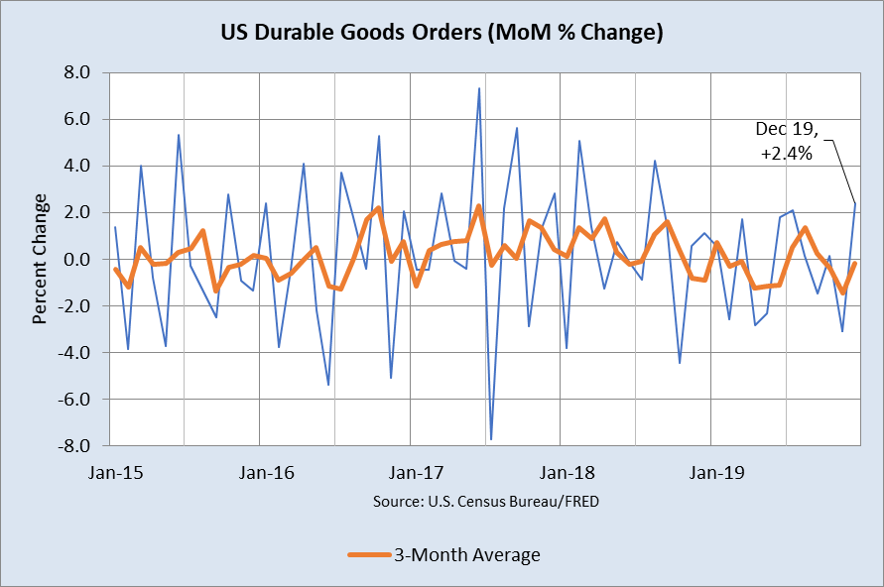 However, the details of the report were less optimistic. Orders excluding defence declined by 2.5% MoM -- largely due to ongoing issues with Boeing's production line -- while orders excluding transport dipped by 0.1% MoM.

The disappointing details of the release bode relatively poorly for the US industrial sector going forward, while also indicating that the sluggish pace of business investment may persist for some time to come.

With investment subdued, the consumer continues to shoulder the burden of prolonging the present economic expansion. Luckily for the US economy, consumers confidence remains upbeat, with the Conference Board's index increasing to 131.6 in January -- a 6-month high.

In the UK, Tuesday was a poor day for the pound, with sterling coming under pressure ahead of Thursday's knife-edge BoE policy decision.

The pound's decline appeared to stem from three factors. Firstly, the solid dollar demand; secondly, ongoing jitters ahead of this week's potential rate cut, which the market sees as an even chance; and thirdly, some potential last-minute nerves ahead of the UK's departure from the EU on Friday.

Sterling ended the day around 0.6% lower against the dollar, chalking up a fourth straight day of losses, and cracking below the $1.30 handle for the first time in just over a week.

The pound's performance against the euro was similarly disappointing, ending the day 0.4% lower, testing key support at €1.18.

The first Federal Reserve policy decision of the year is due this evening, with the FOMC near-certain to leave rates unchanged, continuing to assess the impact that last year's 75bps worth of 'insurance' cuts have had on the economy.

As a result, the target range for the Fed Funds Rate is expected to be maintained at 1.50% - 1.75%, with a unanimous vote likely. The annual rotation of voting regional Fed presidents has done little to affect the hawk-dove balance of the Committee; while, judging from recent comments, all policymakers see the current policy stance as appropriate.

Markets appear to agree, pricing zero chance of a rate cut this evening: 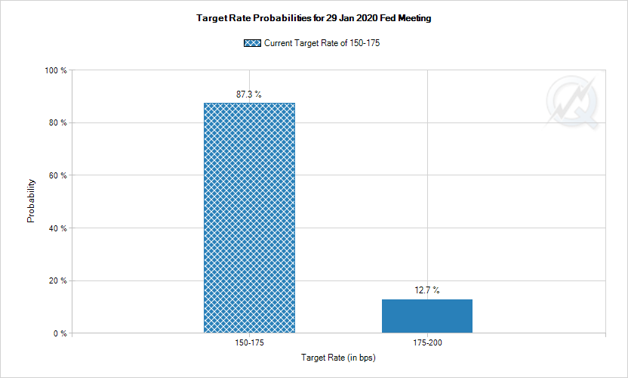 Comments on the economic and policy outlook are also likely to be a non-event, in line with the policy decision. Despite significant uncertainties being removed from the outlook since the last FOMC decision, after the UK election result and signing of a phase one US-China trade deal, the FOMC's assessment of the economy will likely be little changed.

As such, expect the economy to once again be described as expanding at a 'moderate rate' largely due to a 'strong pace' of household spending. The policy outlook is also set to remain unchanged, with rates set to remain at the present levels, barring a 'material reassessment' of the economic outlook.

Taking this into account, it is comments on the Fed's ongoing balance sheet expansion that will be of most interest to market participants.

As the below chart shows, the Fed presently hold just over 4tln USD in assets, having begun expanding their balance sheet in September to control funding pressures in the repo market.

The ongoing asset purchases appear to be providing relatively solid support to risk assets, largely due to the market perception that the programme is a form of 'stealth QE'.

Nonetheless, due to the support that the expansion is providing to risk assets, any indications that the Fed may be ready to turn off the 'easy money' taps would pose a stiff headwind to equity markets. Hence, while unlikely, investors should be acutely aware of the risk that Chair Powell indicates the temporary programme may be drawing to a close.