The latest market highlights and our views on the key developments as markets strike a risk-on tone on trade deal hopes; sterling oscillates in line with opinion polling; and US consumer confidence comes into focus today

Markets begun the week striking a risk-on tone as hopes of a Sino-US trade deal increased once again, while sterling continued to take its lead from opinion polling, and there are signs that Germany's slowdown may be bottoming out.

Trade - Closing in on a deal (again)?

Turning first to trade, market participants are - yet again - growing increasingly hopeful that the US and China will soon be able to agree the terms of a phase one trade deal.

The latest hopes of a deal were sparked by reports in the state-run Chinese Global Times, which indicated that the two superpowers were ‘very close’ to an initial deal, having ‘basically reached a broad consensus’ on the terms of such an agreement. However, it remains clear that the rollback of existing tariffs holds the key to unlocking the path towards a deal, with the report adding that ‘some differences’ remain over this issue. While there have been reports that President Trump may be planning to postpone the planned tariff increase on December 15th, there has been little indication that he is prepared to remove existing tariffs, potentially posing a roadblock to the signing of an agreement.

Nonetheless, risk appetite was buoyed by hopes that a deal would be signed, along with news that China are planning to raise penalties for intellectual property theft, a potential olive branch to the US. This aided antipodeans and dented the attraction of safe-havens.  The Aussie dollar ended the day 0.1% higher, close to its best levels in 6 weeks against its US counterpart, while the Kiwi dollar also gained ground. In contrast, the Japanese yen shed 0.3%, while the Swiss franc also declined. As for the dollar, the greenback added 0.1% against a basket of peers, ticking up to just shy of a 2-week high.

The direction of the pound was once again determined by sentiment towards the upcoming general election as a fresh week got underway with the market continuing to price in a Conservative majority. Weekend opinion polling had shown the Conservatives maintaining a double-digit lead over Labour, hence the market moving to increasingly price in a Tory victory in just over a fortnight's time.

However, there are perhaps some initial signs that the Tory poll lead is slipping, with an ICM-Reuters poll showing Labour gaining ground, closing the lead to just 7 points. The release of the ICM poll saw sterling take a dip lower, with such a move likely to become more pronounced should other opinion polls paint a similar picture.

Sterling did, however, chalk up a solid gain over the course of the day, adding around 0.5% against both the dollar and euro, chalking up its biggest 1-day gain against the latter in two weeks. The pound does, however, remain within the tight trading range that we've seen since the election was called, as the below chart shows.

Looking ahead, there are a couple of notable dates for the diary. Firstly, YouGov plan to release their MRP election model - which correctly predicted a hung Parliament in 2017 - on Wednesday evening. Markets will likely pay close attention to this model, with sterling particularly susceptible to downside risk if the model predicts a different outcome to the opinion polling seen thus far in the campaign.

I've put together some video thoughts on the upcoming election, you can watch by clicking here.

Monday's data highlight was the latest German IFO sentiment survey, which showed tentative signs that sentiment is beginning to improve. November's business climate indicator increased to the highest level since July, at 95.0, a promising sign bearing in mind the recent woes that the eurozone's economic engine room has been experiencing. While the survey remains at a relatively depressed level, signs of stabilisation will surely be welcome, and provide some evidence that the economy may have bottomed out.

However, this may be a double-edged sword, with promising data and sentiment surveys only likely to decrease the chances of the German government enacting a fiscal stimulus programme, something that is needed to definitively turnaround the country's economic fortunes. Market participants will pay close attention to comments from the German government, with any nods towards increased spending to be welcomed.

The data, however, had little effect on the euro, which settled unchanged, trading flat as it has done for most of the year.

Markets are once again likely to be dominated by geopolitical developments today, with risk appetite continuing to hinge on developments in US-China trade relations. Nonetheless, today's economic calendar sees a number of releases from the US.

Of primary interest on today’s US data docket will be this afternoon’s consumer confidence figures, expected to show confidence at a relatively solid 127.0 in November.

As I’ve mentioned on many occasions, consumer spending is the primary factor underpinning the present US economic expansion, hence a healthy level of consumer confidence is key for maintaining the present pace of economic growth. The expected uptick in confidence, just over 1 index point higher than last month, will likely be driven by thawing US-China trade tensions, and solid equity market performance. Should the report show consumers more downbeat than expected, the dollar will likely come under pressure, as concerns would mount over spending during the crucial holiday period.

Meanwhile, there are a host of other releases due from the US today, with many having been brought forward due to Thursday’s Thanksgiving holiday. Barring consumer confidence, the slate comprises largely second-tier releases, including; September’s home price index; October’s new home sales, and goods trade balance; and November’s manufacturing activity data from the Richmond Fed.

While none of these releases are likely to have a significant impact on the price action, they are important when building a broader picture of the US economy. 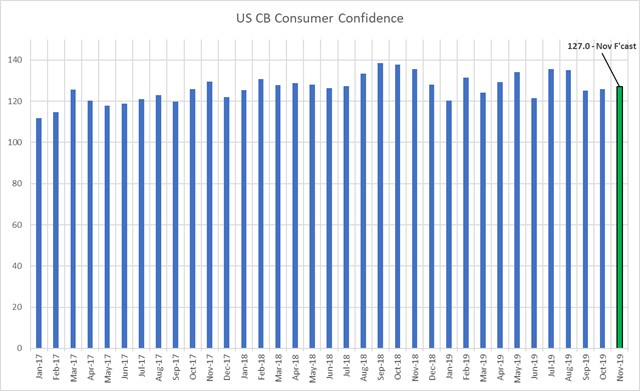 The direction of the pound will, once again, be determined by the ongoing election campaign, with the latest opinion polling set to be the primary focus. Should additional polls show signs that Labour are eating into the Conservatives lead, sterling will likely come under pressure as markets grow more cautious over the election result.

Meanwhile, Labour Leader Jeremy Corbyn will be interviewed by the BBC's Andrew Neil this evening, which may have a bearing on the way some undecided voters choose to vote. Other party leaders will be grilled by Neil next week.

Finally, in the world of central banking, a number of policymakers are due to speak throughout the day. The highlight will be scheduled remarks from Reserve Bank of Australia (RBA) Governor Lowe, with any signs of further policy easing likely to weigh on the Aussie dollar. Markets have fully priced in a further 25bps rate cut by the middle of 2020, however any dovish comments will likely see this pricing brought forward, exerting pressure on the AUD.

Markets will also hear from ECB policymakers Coeuré and Wunsch, likely to reiterate their push for fiscal assistance from eurozone governments, as well as hearing remarks from Fed Board Member Brainard.