The latest market highlights and our views on the key developments as sterling pares some of its post-election advance, the US and China agree a phase one trade deal, and the latest flash PMI surveys highlight today's calendar.

The trading week concluded with a busy, chaotic Friday, as markets continued to react to the Conservative election landslide, but also digested the agreement of a phase one US-China trade deal (finally!) and examined the latest US retail sales figures.

Starting with trade, after months - even years - of back and forth between negotiators and senior figures on both sides, the US and China have finally reached a phase one trade deal.

The agreement, which will be signed in the early part of 2020, sees the US pledge to halve 15% tariffs on around $120bln of Chinese goods, while future rollbacks will be linked to the progress of talks on the following phases of negotiations.

China, meanwhile, haven't agreed to any specific tariff reductions as part of the deal; though have committed to significant increases in purchases of US agricultural products, along with relaxing laws on forced technology transfer.

As is to be expected, both sides heralded the agreement. China said that the talks have achieved 'major progress' while President Trump, in typical modest manner, called it an 'amazing deal' with talks on a second phase to begin 'immediately'.

Nonetheless, despite the jubilation among the two governments, markets were less enthusiastic. With the exact details of the trade deal still somewhat thin on the ground, and the agreement not set to be signed until January, there was something of a 'buy the rumour, sell the fact' reaction in evidence.

As a result, the risk-sensitive Aussie and Kiwi dollars both struggled, shedding 0.8% and 0.4% apiece. Conversely, the dollar was well-supported, adding more than 0.5%, while the Japanese yen and Swiss franc - both safe-havens - were also well-bid, adding 0.3% each.

The Brexit Election 2019 – The Rundown

I thought I'd take the opportunity this morning to have a deeper look at last week's election as, in a sleep-deprived haste on Friday, all I did was report on the headline result (which hadn't been confirmed at that point) and the brief pop higher in sterling.

At the beginning of the campaign we called the election 'The Brexit Election'. This proved correct, with the election having been called because of Brexit; the campaign being dominated by Brexit; and the result being determined by views on Brexit.

Looking under the hood, the scale of the Conservative's win is vast -- not just in terms of the Parliamentary majority of 80, but more so where the Tories managed to win seats. Swathes of seats across Labour's traditional heartlands in the midlands and the north turned blue -- with the electorate voting along leave-remain lines, rather than traditional left-right politics.

The below graphic from The Times illustrates this swing well: 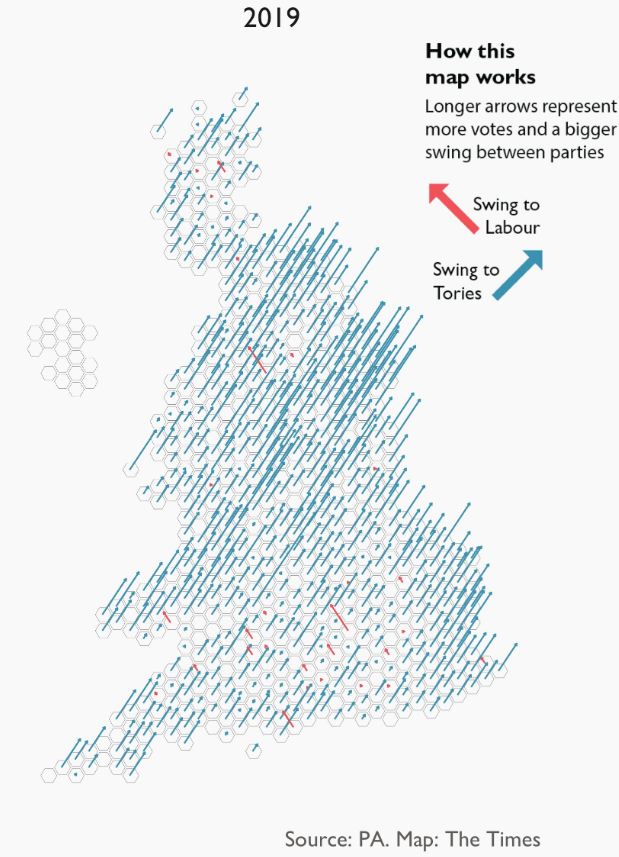 Looking further at the leave-remain divide, it is clear that the Conservatives largely succeeded in uniting leave voters behind their party, leaving Nigel Farage's Brexit party without a single seat in the Commons, and now seemingly redundant.

On the remain side, however, there was no such unity. Remain voters were left with a choice between Jeremy Corbyn's Labour, Jo Swinson's Liberal Democrats, Nicola Sturgeon's SNP, or a number of other smaller parties. This made it difficult for these parties to win a significant number of Commons seats due to the UK's first past the post voting system.

The below chart, showing the split of seats in the new Parliament illustrates this. 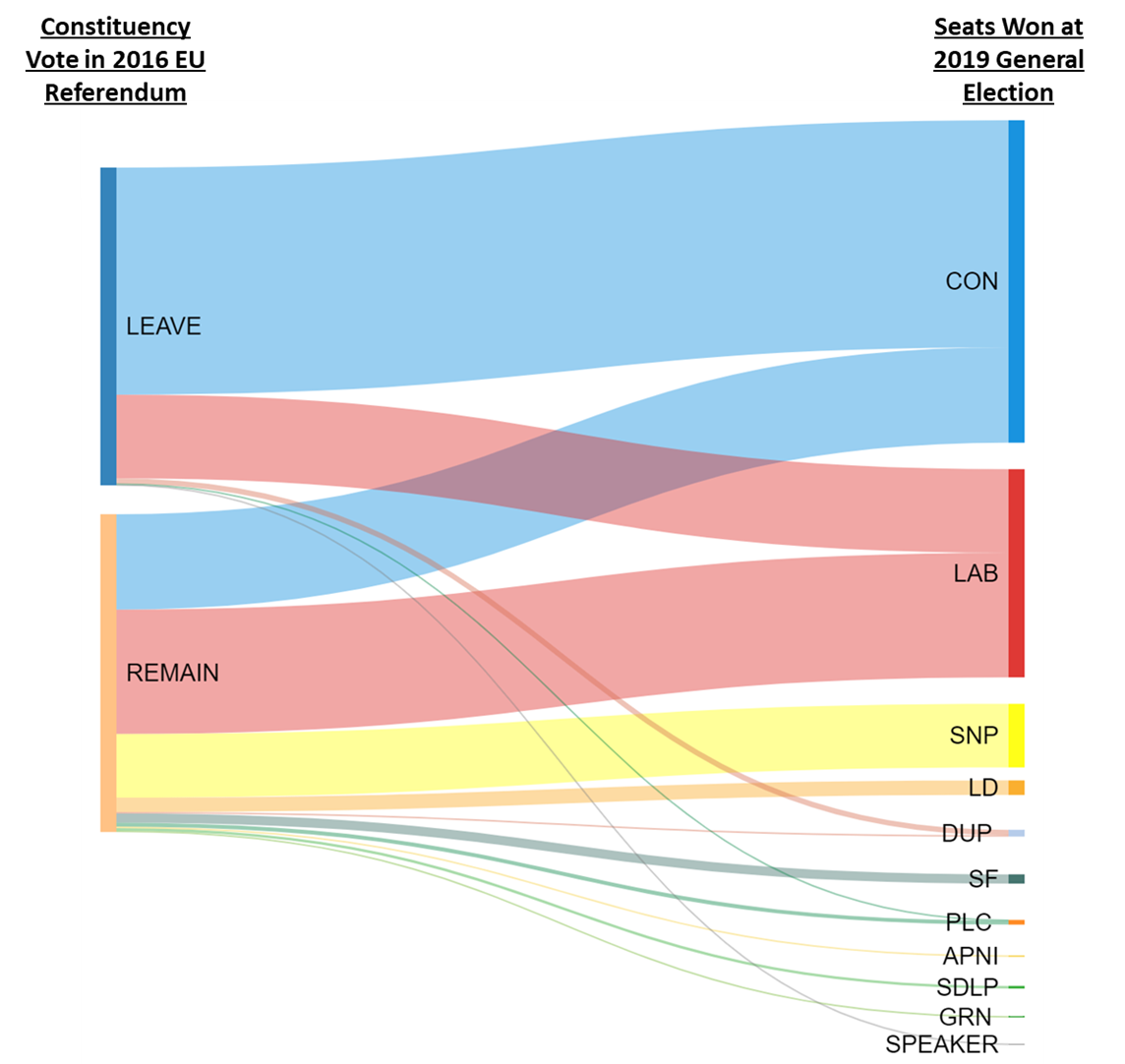 As a result of the 80-seat majority -- the largest since Thatcher -- that the Conservatives have won by virtue of the above factors, Prime Minister Boris Johnson has the freedom to govern how he would like, meaning that Brexit will now occur on 31st January 2020, with a fully ratified Withdrawal Agreement. There will be no more knife-edge Brexit votes in the Commons with such a commanding majority.

Looking ahead, Johnson also has increased freedom when it comes to the future UK-EU trading relationship, no longer having his hands tied by the Eurosceptic ERG wing of the Tory party. Could this result in a softer form of Brexit and a closer future relationship? Could this result in the 11-month implementation period being extended? Only time will tell, however the likelihood of both scenarios occurring has greatly increased after the election result.

For Labour and the Liberal Democrats, the months ahead are going to see a period of rebuilding, with both parties set to hold leadership elections in the near future after Labour leader Corbyn pledged to stand down 'early in the new year' and Lib Dem leader Jo Swinson lost her seat on election night.

Meanwhile, questions about the status of the Union of the United Kingdom will likely need to be addressed. After the SNP's landslide in Scotland -- winning 48 of 59 seats -- First Minister Nicola Sturgeon is likely to intensify her push towards a second independence referendum. Furthermore, in Northern Ireland, for the first time ever, the election returned a majority of nationalist rather than unionist MPs, potentially resulting in increased calls for a united Ireland.

Anyway, with the political dissection done, let's look at the pound. Sterling was a touch softer on Friday, with around half of the post-election bounce fading; another buy the rumour, sell the fact reaction. This was in evidence across the board, with the pound closing around 1% below the highs seen after Thursday's exit poll.

Nonetheless, since Boris Johnson was elected as Tory leader and Prime Minister back in July, we have seen something of a 'Boris Bounce' in sterling; first stemming from the agreement of a new Brexit deal, then from last week's election victory.

Away from the election, Friday's major data release came from the US, in the form of November's retail sales report.

The control group sales measure - the basket of goods which feeds into the GDP report - was also lacklustre, increasing at only 0.1% MoM.

However, despite the softer than expected report, both December's and January's sales should increase significantly due to the busy holiday shopping season. Nonetheless, if the present sluggish sales pace continues throughout the Christmas period, it would be a concerning sign for the US economic expansion. 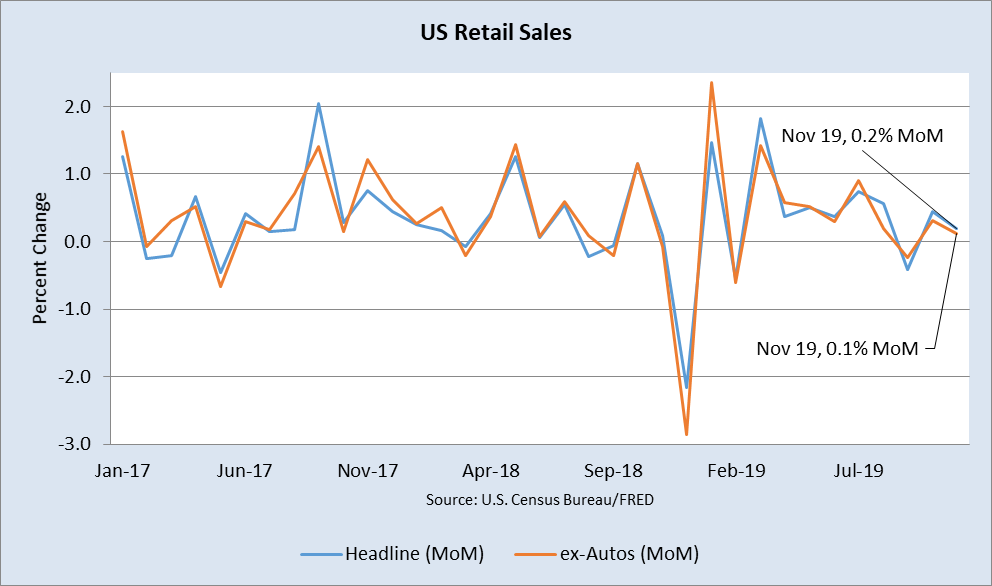 The final full trading week of the year kicks off with a busy economic calendar, with a number of other major releases due throughout the week.

Today's data highlight comes in the form of the latest flash PMI reports from both the eurozone and UK, with investors set to examine the data to see whether the economic slump is continuing, or showing signs of bottoming out.

From the eurozone, data is set to show the manufacturing industry in contraction for an 11th straight month, with the PMI set to read 47.1. Nonetheless, despite this once again being below the crucial 50.0 breakeven between expansion and contraction, such a print would represent the fourth straight increase in the index, a sign of data having bottomed out.

Meanwhile, activity in the services sector is expected to continue expanding at a healthy rate - 52.0 - which should push the composite PMI to 50.9, a level last seen in August.

Turning to the political world, the week ahead will likely see a number of key developments as PM Johnson begins to shape the nation having won a landslide majority. The agenda for the week ahead is as follows:

Meanwhile, in the world of monetary policy, the week ahead sees the final decisions of 2019 from both the Bank of Japan (BoJ) and Bank of England (BoE).

Both Banks are likely to keep monetary policy on hold; the BoJ because their policy toolkit is almost empty, and the BoE due to having given no indication of wanting to add any immediate policy accommodation to the UK economy.

With this in mind, focus for the BoE will be on the vote split among MPC members, with November's policy meeting seeing two policymakers (Haskel & Saunders) voting for a cut. Comments on the health of the UK economy will also be closely watched.

Markets will also receive minutes from the RBA's December policy meeting this week, potentially providing insight on the 2020 policy outlook.

Finally, this week sees a number of notable data releases, including a full check-up on the health of the UK economy. On the slate from the UK are employment figures (Tues), inflation (Weds), retail sales (Thurs) and the final read on third quarter GDP (Fri). With politics now appearing a little more stable, the emphasis for sterling may now shift back to economic fundamentals.

Meanwhile, from across the world, inflation figures also are due from the eurozone, Japan and Canada. Markets will also examine the initial estimate of third quarter New Zealand GDP, as well as taking note of any revisions to the final estimate of US Q3 GDP.