The latest market highlights and our views on the key developments as rebalancing flows dominate the final day of an unforgettable first quarter; the coroanvirus pandemic remains front of mind for investors; while manufacturing PMIs and ADP employment figures are eyed today.

It's difficult to pick out a clear narrative that drove trade on Tuesday, with month- and quarter-end flows making for choppy trading conditions as institutional investors rebalanced their portfolios after a volatile couple of weeks.

Of course, market participants continue to pay close attention to the coronavirus pandemic, with global cases having now exceeded the 800,000 mark; just two days after we crossed the 700,000 barrier. The epicentre of the pandemic does continue to move westwards, with the USA now having the most confirmed cases of any country, and New York City becoming an ever-growing area of concern.

Despite this, there does appear to be a chink of light emerging at the end of the tunnel. Italy, which has been hit incredibly hard by the virus, is showing signs that the peak of the epidemic may have passed; while scientists in both the UK and US note that social distancing measures are having a noticeable impact on the virus' spread.

Starting with equities, European bourses ended a torrid quarter on a positive note, with the broad-based Stoxx 600 ending the day around 1.6% higher; albeit still nursing losses of around 23% on the quarter, its biggest quarterly loss since 2002.

At a sector level, travel and leisure stocks led the way as hopes of government support for the sector increased; while banks faced headwinds after the ECB repeated calls for no dividends to be paid until October. London's FTSE 100, meanwhile, closed around 1.8% higher on Tuesday, though recorded its worst quarter since 1987.

On Wall St, stocks slid into the final close of the quarter, as rebalancing flows appeared to subside. The benchmark S&P 500 ended the day 1.6% lower, with utilities and financials dragging the index lower. 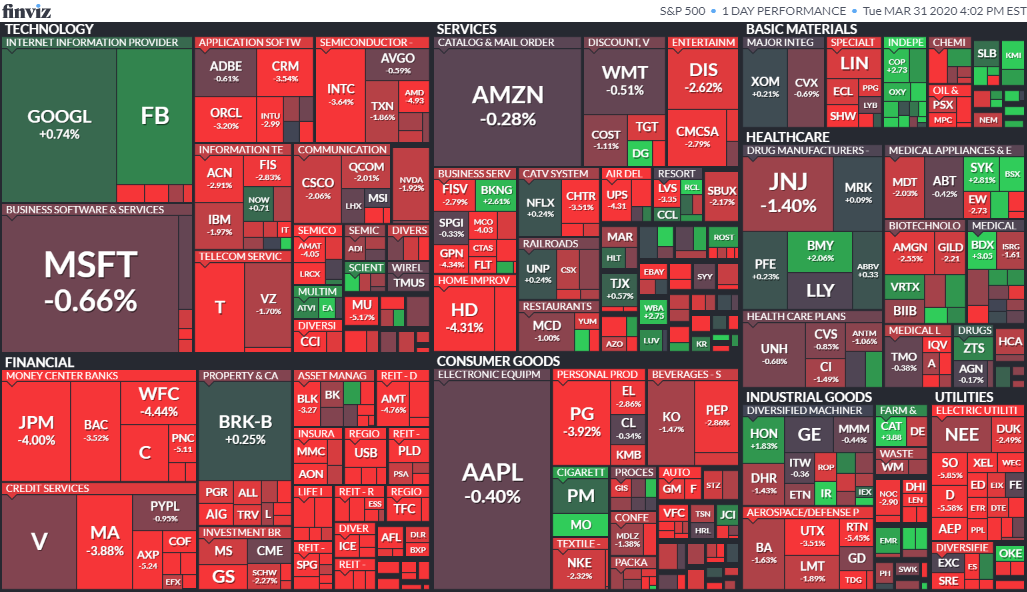 Volatility, meanwhile, continued to decline, with the VIX falling 3 handles to 54.0. This is a positive development as, while the current bear market may not yet have bottomed out, volatility does at least appear to have peaked.

Turning to bonds, the Treasury market was largely uninspiring on Tuesday, with yields treading water for the majority of the day. Benchmark 10-year notes continue to yield around 0.67%.

In G10 FX, it was also difficult to find a consistent narrative, with incredibly choppy trading conditions being the order of the day, particularly into the 4pm London fixing. As such, the scorecard is a bit messy: 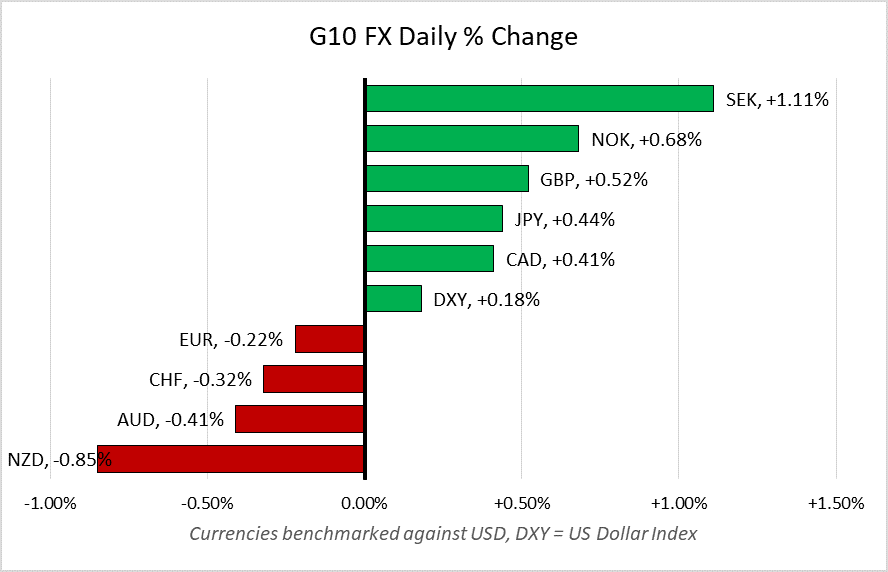 The most notable trend, if there was one, was the continued bid into the dollar, coming despite the Fed announcing additional liquidity measures to ensure ample supply of dollars around the world. The Fed unveiled a temporary repo facility with foreign central banks, enabling them to swap collateral for cash from 6th April. This programme is a good idea for two reasons.

Firstly, it will work alongside the existing USD swap lines to ensure adequate liquidity is available where it is required. Secondly, the facility should stop forced selling of Treasuries in order to generate cash, something which should help to ensure the market as a whole continues to function properly.

Elsewhere, sterling ground steadily higher throughout most of the day, peaking around $1.2450 shortly after the London fixing. Against the euro, the pound gained more than 0.75%, rising to a 2-week high.

Finally, it was a rollercoaster ride for the Canadian dollar, which traded in a whopping 225 point range against its US counterpart. After initially facing headwinds, the loonie found some support into the afternoon session, ending the day with a modest gain.

Q1 Review - From Euphoria to Panic

The longest quarter ever is finally over.

I think I can safely say that the first quarter of 2020 was one unlike any we had seen before, and certainly unlike one we could've predicted this time three months ago. The word coronavirus, for example, didn't even feature in my 2020 outlook -- now you struggle to go half an hour without hearing about the pandemic. On a personal level, Q1 has gone from the usual daily routine and commute into the City, to working from home amid strict social distancing 'lockdown' measures.

Markets, meanwhile, have gone from a state of euphoria at the beginning of the quarter, to a state of panic as the scale of the pandemic and its grip on the global economy became clear. Volatility has, as a result, surged across asset classes, with even the FX market -- after a rangebound 2019 -- finally waking up.

Some of the moves in the first three months of 2020 have been nothing short of seismic:

Despite the unbelievable nature of some the moves seen in Q1, I can assure you that nothing in today's Note is an April Fool's joke.

Policymakers certainly haven't been joking, with both governments and central banks taking the 'kitchen sink' approach to stimulus in an attempt to cushion the blow that the coronavirus will inflict on the global economy:

Of course, there were a host of policy measures from across the world, which can be found on this brilliant page from the IMF here.

The first quarter may now be over, however volatility remains elevated, and the coronavirus pandemic continues to dominate the narrative. As such, Q2 might be as much of a wild ride as the three months we've just seen.