The latest market highlights and our views on the key developments as the dollar's rally continues; sterling fails to gain ground despite a surge in retail sales; sentiment is shaky as investors monitor the coronavirus outbreak; and February's flash PMI surveys are eyed today

The dollar continued its steady grind higher on Thursday extending its recent gains against a basket of peers into a 7th consecutive day, as market participants continued to focus on the narrative of US economic outperformance, and demand for US assets remained healthy. 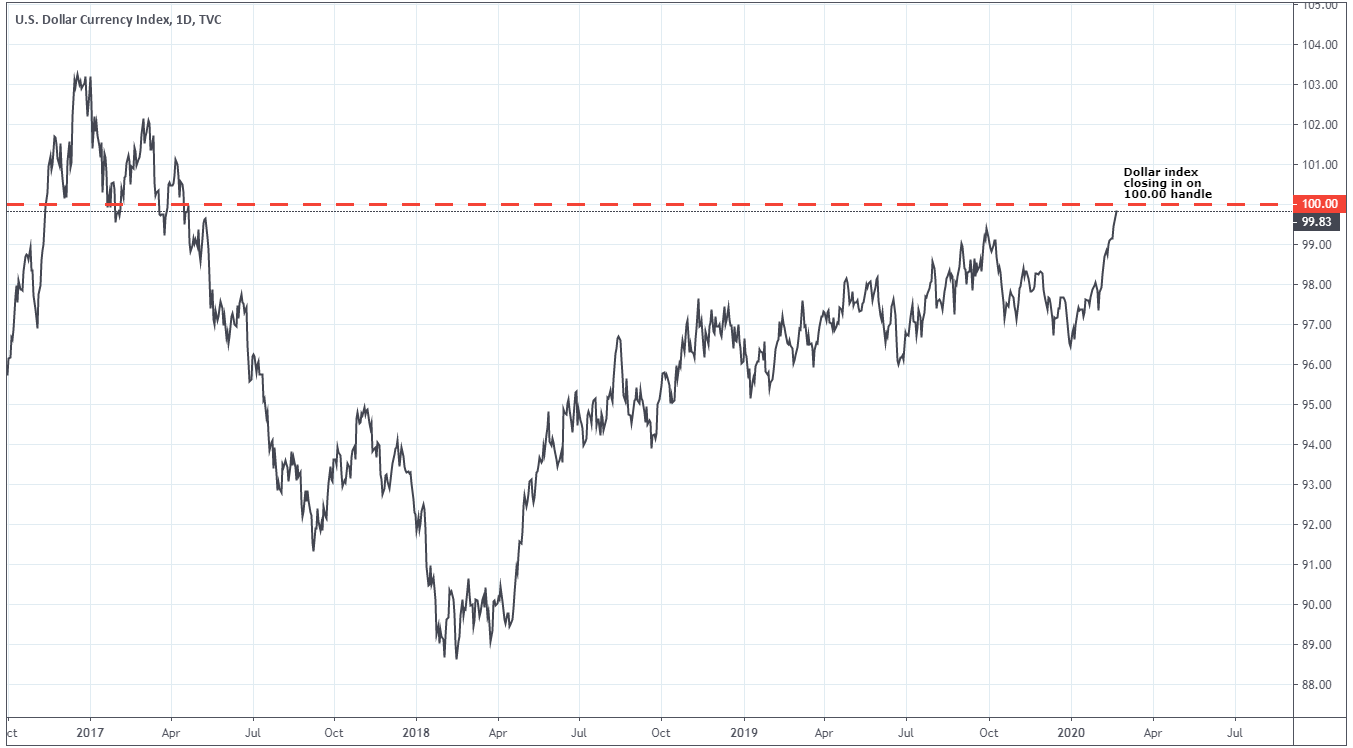 This theme of economic outperformance was reinforced yesterday by a significantly better than expected Philadelphia Fed manufacturing survey, with the index rising to a 3-year high 36.7 this month. 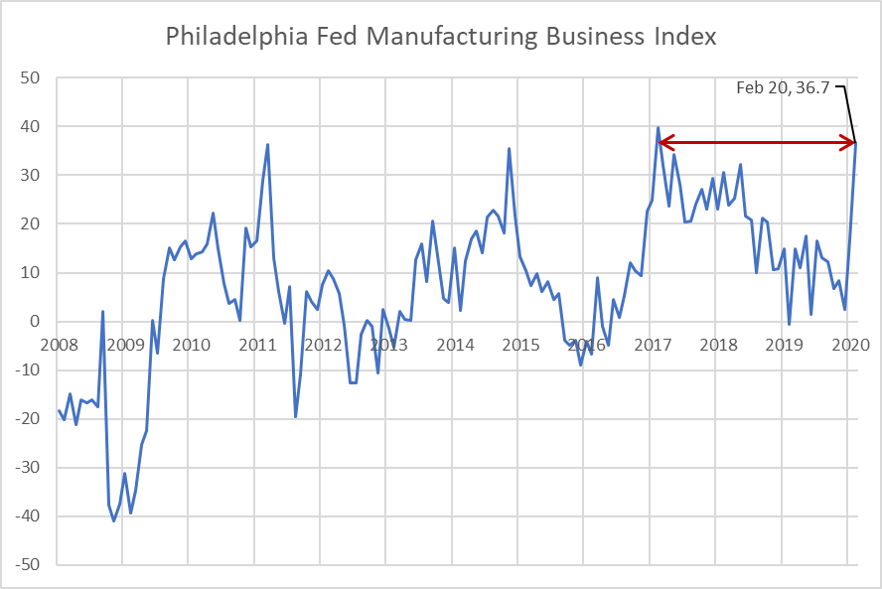 The increase is more surprising given the negative impact that the ongoing coronavirus outbreak is expected to have on the manufacturing sector, perhaps signalling that the US economy is less exposed than global peers. Should this uptick in the Philly Fed's index be mirrored in other regional indices, and result in an uptick in manufacturing output, this would be a welcome sign for the US economy, and would relieve some of the burden on the consumer.

Another factor underpinning the dollar's recent gains is yields. Treasuries, as the below shows, continue to have among the highest yields of G10 peers. Hence, when institutional investors are allocating significant amounts of cash, they will be drawn to the US government bond market. 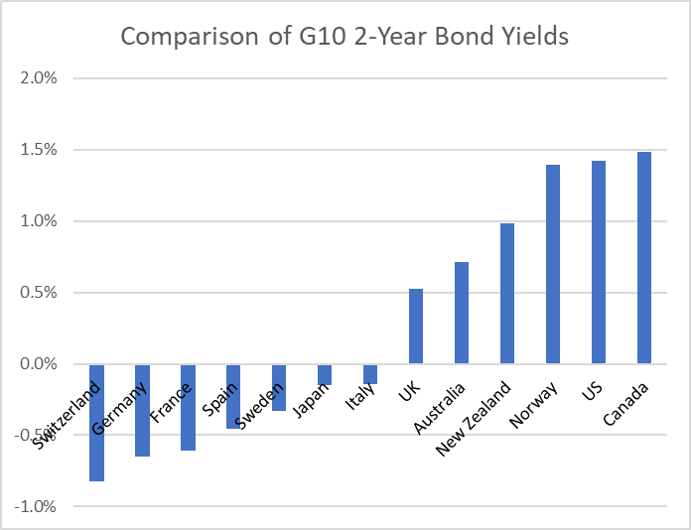 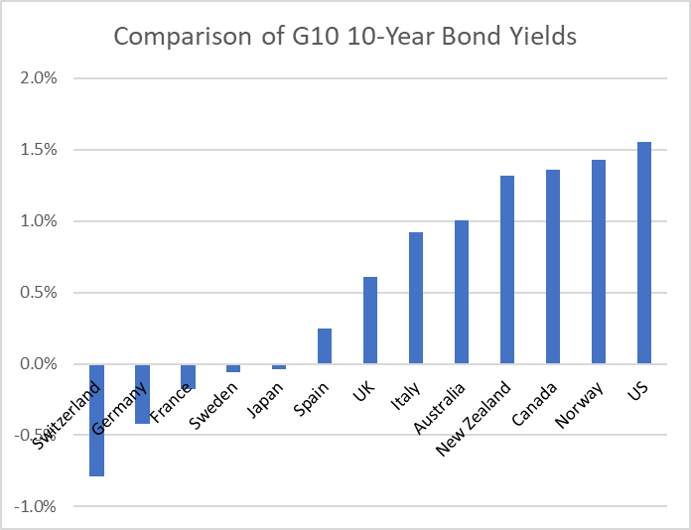 This is something that investors should pay close attention to; it would be folly to underestimate the power of significant asset allocation decisions and the cross-asset impact that they can haven.

These fundamental factors show little signs of changing in the near-term, hence the dollar's rally appears to still have further room to run with the greenback set to continue sitting in a sweet-spot among G10 peers.

Drilling down to a currency-specific level, the greenback took a pause for breath against the euro on Thursday, failing to sustain any major breaks lower, and trading within a tight range around the $1.08 handle. Meanwhile, the dollar's advance took the greenback to its best levels in 11-years against the Aussie dollar, adding more than 1%, while the buck also chalked up a similar advance against the Kiwi dollar.

It is, however, the move in USD/JPY that, I think, is of particular interest, with the pairing having gained almost 2.5% since Tuesday's lows. The precise catalyst for the move remains up for debate, with various reasons ranging from Japanese pension portfolio flows, a technical breakout of the 2015-date downtrend, or even the diminishing usage of the yen as a funding currency for carry trades.

Despite this, the sell-off in the safe-haven yen doesn't appear to tally up with what is being seen in other asset classes, particularly gold continuing to gain ground and a steady, persistent bid into the bond market. Perhaps this is, therefore, more symptomatic of the yen's diminishing status as a haven. 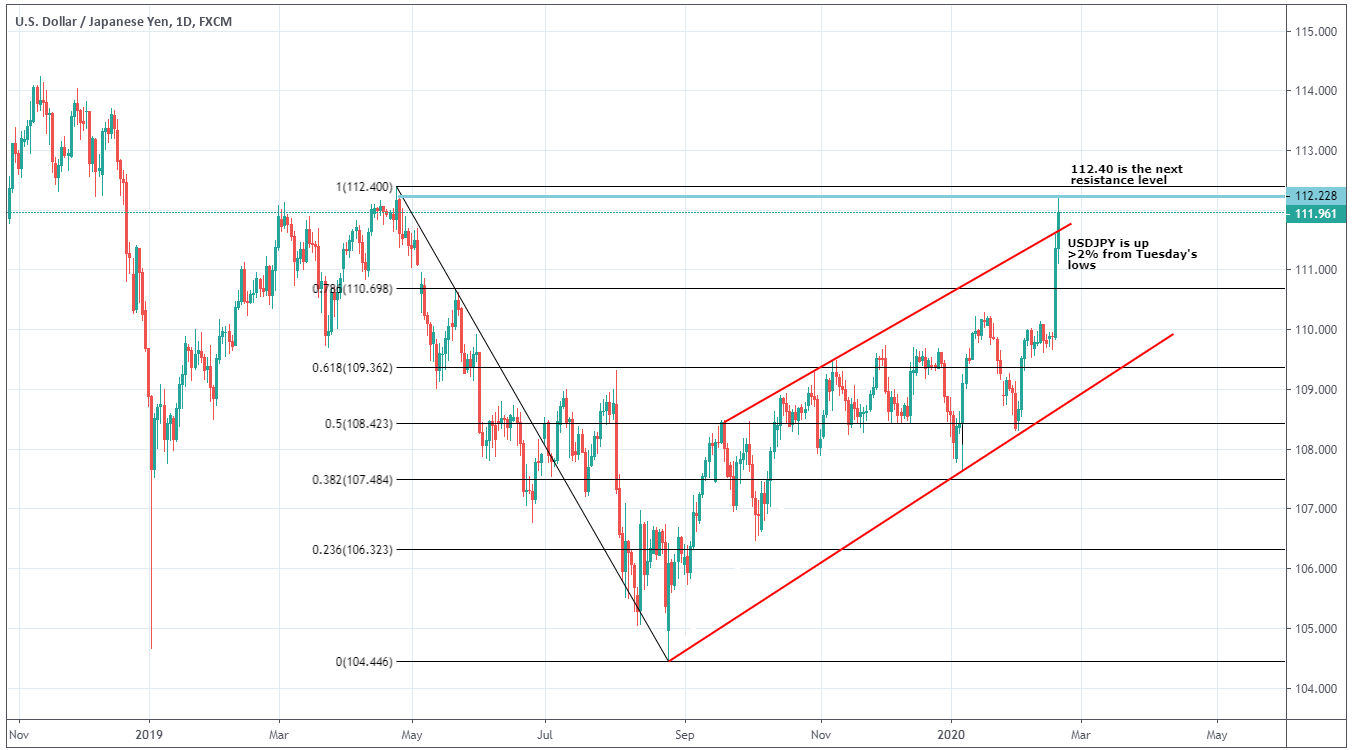 Either way, the return of some decent volatility -- which has been rooted to record lows for some time now -- should be welcomed by all involved in the FX market.

Meanwhile, here in the UK, January's retail sales report surprised to the upside, providing further evidence of the post-election 'Boris bounce' in the UK economy.

Headline sales increased by 0.9% MoM, the fastest pace since last March; while sales excluding fuel surged by 1.6% MoM, the biggest jump since May 2018 and beating all forecasts submitted to Bloomberg. 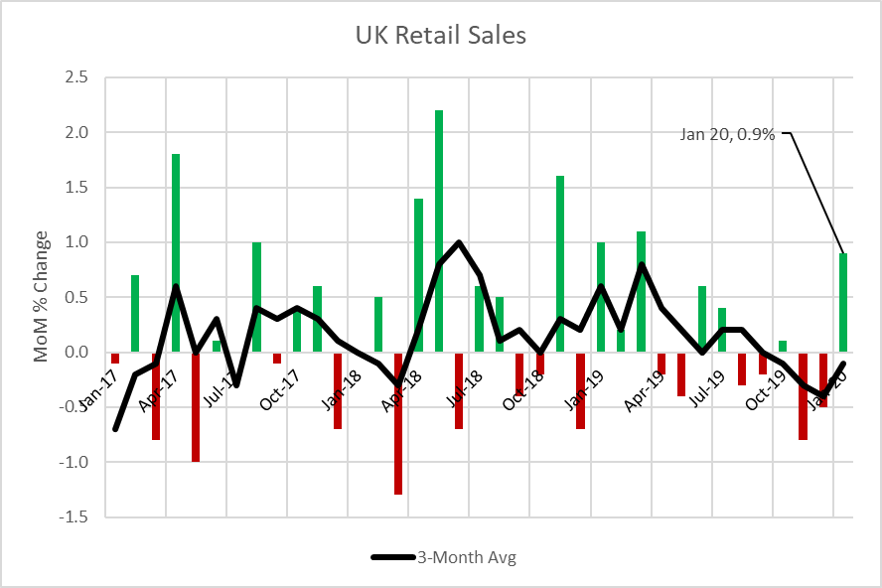 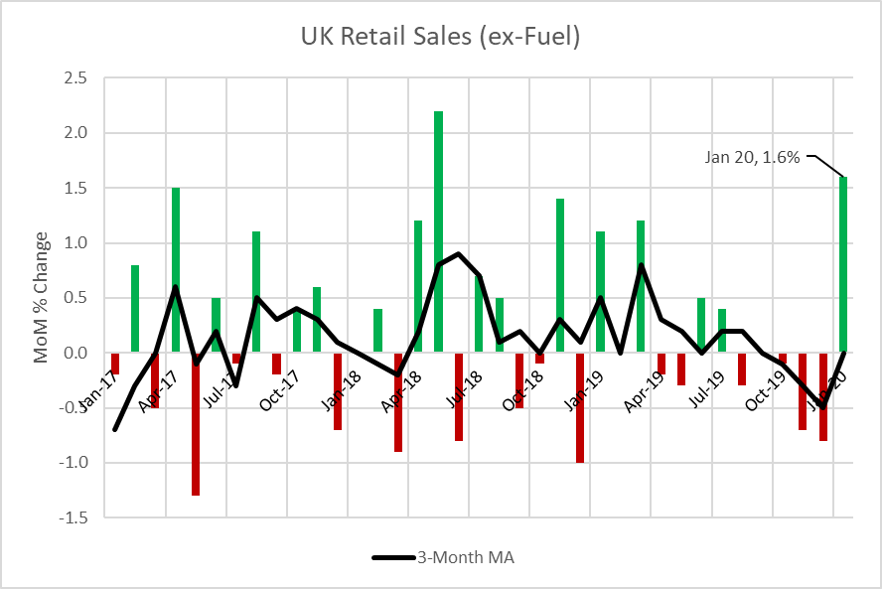 The surprisingly sharp increase, which came despite a significant decline in fuel sales, shows how the post-election bounce in consumer sentiment has been followed up by an increased level of consumer spending; a reassuring sign for the Bank of England which should see policymakers remain on the side-lines.

Despite the positive sales prints, sterling failed to gain ground, quickly paring a 20 pip gain made after the release. The pound ended the day around 0.3% lower against both the dollar and euro, hitting a fresh post-election low against the former (at $1.2848) before paring losses.

More broadly, risk sentiment was shaky on Thursday, as investors continued to monitor the coronavirus outbreak, and digested a host of corporate earnings.

In equity markets, the pan-European Stoxx 600 was 0.6% lower at the close, with pressure also stemming from continued concerns about the health of the eurozone economy.  Meanwhile, in the US, major indices closed in the red - failing to recover ground after a perplexing midday sell-off. At the close, the benchmark S&P 500 was 0.4% lower, though well-off session lows.

Attention turns to the latest PMI surveys today, with flash survey data due from both the eurozone and UK this morning.

In the eurozone, February's flash data is expected to show the manufacturing sector contracting for a 13th consecutive month, with the index expected to decline to 47.5 - well below the 50.0 break-even mark.

Meanwhile, in the services sector, the PMI is expected to fall for a third straight month, with a consensus estimate of 52.2. 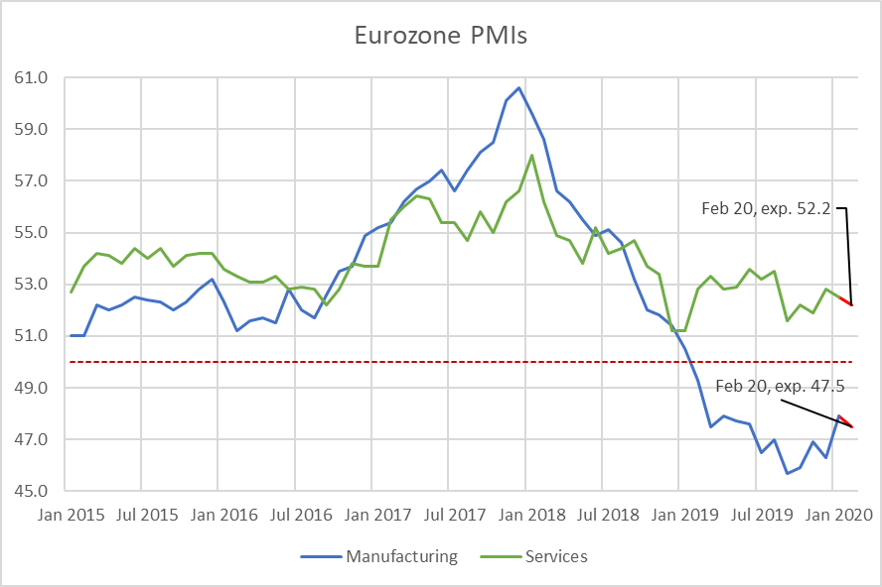 The data, if released in line with expectations, would provide further evidence of the lacklustre growth momentum in the eurozone, further emphasising the need for co-ordinated fiscal stimulus from the bloc's governments. Furthermore, the surveys will be parsed for any impacts of the coronavirus epidemic on the bloc's economy.

Meanwhile, in the UK, investors will be looking for February's flash data to show the surveys consolidating last month's post-election bounce, providing further evidence of the economy turning around in 2020. 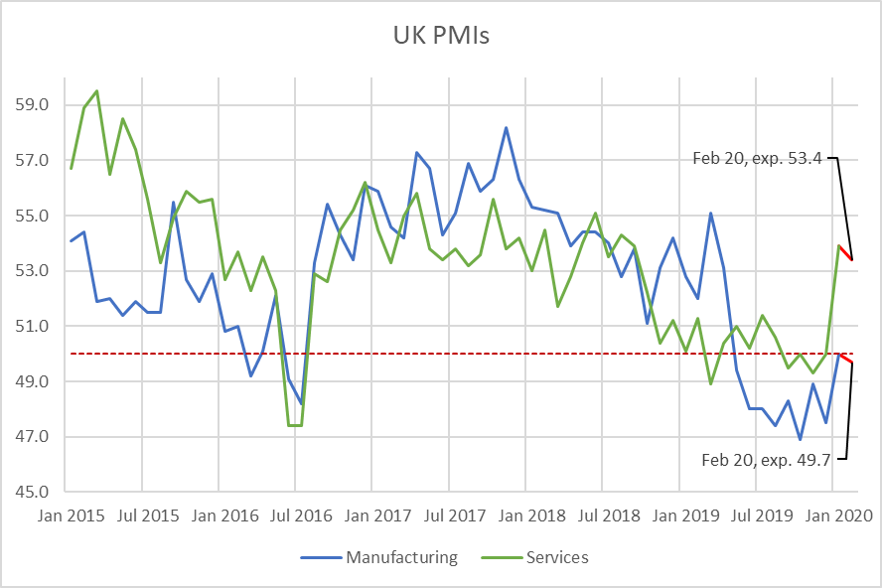 Looking ahead to next week, the data calendar is relatively light, with no top-tier UK releases due. Of next week's releases, the only notable figures come from the US, in the form of the 2nd estimate of fourth quarter GDP (Thurs) and the latest core PCE figures (Fri).

Elsewhere, the coronavirus outbreak will remain the primary driver of risk sentiment, particularly as markets continue to assess the scale of the epidemic, and the recovery of the Chinese economy.

US politics will also become an increasing focus, with the Democratic Primary process continuing; with Senator Bernie Sanders still the favourite, but former New York Mayor Michael Bloomberg surging in polls. Tomorrow sees caucuses held in Nevada, before next Saturday's South Carolina primary, and Super Tuesday - when around 35% of delegates are allocated - in the first week of March.