Trade jitters return, sterling jumps to a 6-month high, the latest services PMIs are due and the BoC are set to keep rates on hold

Markets were roiled by yet another round of trade headlines on Tuesday, with a flight to safety in evidence across asset classes, while sterling gained ground as election jitters were soothed by the latest polls.

The tariff man has struck again. US President Trump has once again switched back to being über-hawkish on trade, slapping tariffs (or threatening to) on 4 nations in the last 48 hours alone.

Not content with re-imposing tariffs on Brazilian and Argentinian steel imports - in retaliation for perceived currency manipulation - Trump turned his attention to Europe on Tuesday, in what will be bad news for lovers of luxury goods.

The Donald threatened tariffs of up to 100% on French imports in response to the French digital tax on US tech firms. The tariffs, which would target approximately $2.4bln worth of trade, including imports of champagne, luxury handbags and French cheese. This threat made for a rather tense Trump-Macron bilateral on the sidelines of the NATO summit.

Nonetheless, it was Sino-US relations that markets were most interested in, with the trade war cycle (below) now back at the 'administration tough on China' stage. 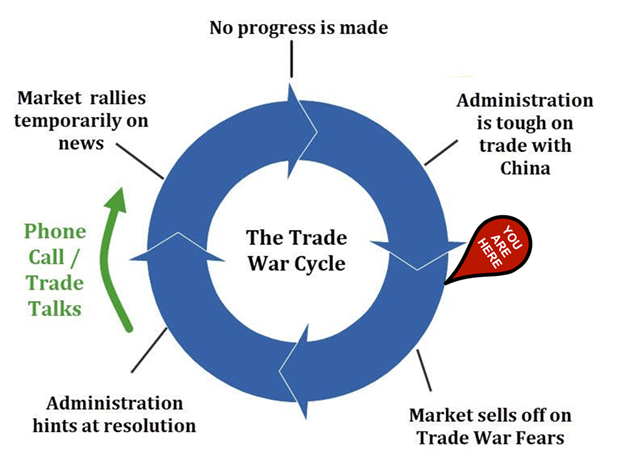 Tuesday saw Trump cast further doubt on the imminent agreement of a phase one deal, indicating that he would be happy to wait until after next year's presidential election before signing a deal. Furthermore, Trump - being as modest as ever - said that the deal is dependent on one thing, 'do I want to make it?'

These comments casting doubt on a phase one deal saw markets strike a risk averse tone, with the risk-off mood exacerbated throughout afternoon trade by a plethora of negative headlines. Firstly, Fox News indicated that the US are still planning to increase tariffs on 15th December. Then, US Commerce Secretary Wilbur Ross struck a hawkish tone, stating that the US has more 'ammunition' left against China; while rumours continued to swirl that Trump is looking at further tariffs against the EU in retaliation for state aid given to Airbus.

As a result of the downbeat and concerning headlines, safe-havens were well-bid for a second consecutive day. In G10 FX, this meant the Japanese yen and Swiss franc finding support, adding 0.4% and 0.5% respectively. Treasuries were well-supported, with 10-year yields falling 12bps to a 1-month low. Conversely, the dollar continued its slide, losing 0.2% against a basket of peers, with the dollar index falling to its lowest levels since October. Equity markets also struggled, with the pan-European Stoxx 600 losing 0.6% and the US benchmark S&P 500 shedding 0.65%.

It is, however, important to look at the longer term impact of Trump's tariff-based approach to diplomacy. By using weaponising tariffs and using them as a policy tool, Trump is creating a longer-lasting legacy by setting an example that future presidents may look to follow.

Away from trade, the pound continued to strike a firmer tone, benefitting from the weaker greenback and opinion polling settling some nerves. Two polls, from Kantar and YouGov, showed no change to the Conservative Party's lead, putting the Tories 12 and 9 points ahead of Labour respectively. These polls, which contrast with a narrowing of the lead over the weekend, reassured investors that the Tories are still on track for a majority.

Speaking of the Tories, CCHQ will likely be breathing a sigh of relief after President Trump largely avoided wading into the election campaign. Despite stating that Boris Johnson is "very capable" and that Trump is a "fan of Brexit", comments that his administration wants "absolutely nothing to do with the NHS" will come as music to the Tory Party's ears and are likely to be used as a rebuttal to Labour's recent claims.

For the pound, all this resulted in gains of just under 0.5% against both the dollar and euro. While the advance against the common currency was only enough to erase yesterday's loss; the pound's gain against the greenback saw us break above the key $1.30 handle, and print a 6-week high.

After Tuesday's relatively barren economic calendar, things are a little busier today. However, despite the data, market participants will likely remain glued to the latest trade headlines, with this set to once again be the primary driver of risk appetite.

Kicking things off are the usual round of services PMI surveys, completing the typical economic health check that heralds the start of a new month. In the surveys, market participants will be particularly focused on whether the ongoing manufacturing slowdown is having a spill-over effect on other areas of the economy, and the impact that this may have on Q4 GDP data.

From the eurozone, the services sector is expected to have maintained a steady rate of expansion in November, with the PMI expected at 51.5, unchanged from the preliminary estimate.  Such a figure should keep the composite gauge - which measures output across the economy - just above the 50.0 marker between expansion and contraction. However, despite a composite reading of 50.3 providing further evidence of the bloc's ongoing economic fragilities, a degree of bad news has already been priced into the common currency, hence little in the way of volatility is to be expected.

Meanwhile, in the UK, November's services PMI is also expected unrevised from the flash estimate, reading 48.6 - solidly into contractionary territory. Such a figure, combined with the manufacturing number earlier in the week, would be consistent with another quarterly economic contraction in Q4. Nonetheless, sterling is likely to take its cue from political developments, rather than the data.

Completing today's bunch of PMI survey will be the latest ISM non-manufacturing gauge from the US. The index is expected to point to a solid pace of expansion in November, at 54.5, largely unchanged from the previous month. After Monday's manufacturing disappointment, the data will be closely watched for any signs that activity in the non-manufacturing sector is also softening. Investors will also take a close look at the employment component of the report, which is a useful leading indicator of Friday's payrolls figure.

Away from data releases, the Bank of Canada (BoC) are set to announce their latest monetary policy decision this afternoon. Policymakers are expected to keep rates unchanged at 1.75%, seeing the BoC maintain the highest policy rate across developed central banks. 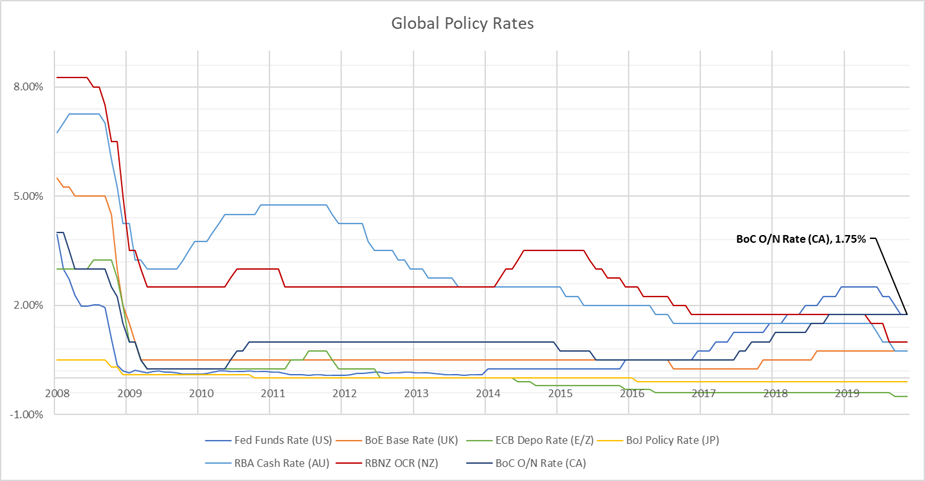 Despite the expectations for no policy changes, the meeting should be far from a non-event, with market participants set to look closely at the BoC's language and assessment of the Canadian economy. At the October policy meeting, policymakers stated that the 'resilience of Canada's economy will be increasingly tested'; flagging trade conflicts and global uncertainties as the primary downside risks.

As such, with neither showing signs of significantly abating, policymakers may strike a more cautious, dovish tone, indicating that increased policy accommodation may be necessary in the medium-term. Should any such comments be made, they will likely pose a headwind to the loonie.