The latest market highlights and our views on the key developments as sterling surges after Javid's resignation, with markets believing increased spending is to come; the euro's slide extends into an eighth straight day; sentiment sours as coronavirus cases spike; and today's US retail sales and consumer sentiment reports come into focus

Sterling surged on Thursday after the surprise resignation of Chancellor Sajid Javid reshaped the fiscal outlook for the UK economy.

Javid had been expected to keep his Chancellor job during yesterday's Cabinet reshuffle, however was told by PM Johnson that he would only be able to continue in his role if he sacked his entire team of Special Advisers. Javid felt that these terms were unacceptable - saying that 'no self-respecting minister' could accept them - and resigned.

His replacement, Rishi Sunak - previously number two at the Treasury - is seen as a weaker Chancellor, chiefly due to only being an MP for around 5 years. This, together with the announcement that Number 10 and Number 11 will have a combined team of advisers going forward, is an indication that this move is all about power.

It appears clear that PM Johnson - and likely his Chief Adviser Dominic Cummings - want to take greater control of the Treasury, perhaps not wanting to put up with fiscal rules or questions over whether grand schemes can be afforded.

Taking into account the power grab, expect Sunak to frequently be referred to as 'Chancellor in name only'.

For markets, however, the greater degree of control that Johnson and his team are now likely to have over the Treasury increases the likelihood of more expansionary fiscal policies and the possible abandonment of the previously announced fiscal rules - with seemingly few checks or balances to halt any spending plans.

The increased expectations of fiscal stimulus firm up the view that the economy will continue to enjoy a 'Boris bounce' in the first half of the year, thereby reducing the chances of a BoE rate cut.

As markets took stock of this, sterling shot higher, recovering from a brief blip as news of the resignation hit the wires.

The pound ended the day 0.75% higher against the dollar, chalking up a 4th consecutive daily gain - the longest run since December - and trading at a 1-week high.

Against the beleaguered common currency, sterling ended the day with gains of around 1%, rallying to its highest levels since election night, trading in the mid €1.20s.

Elsewhere, having believed that the coronavirus outbreak had peaked and was beginning to come under control, markets were shaken out of their complacency after a surge in the number of Chinese cases. 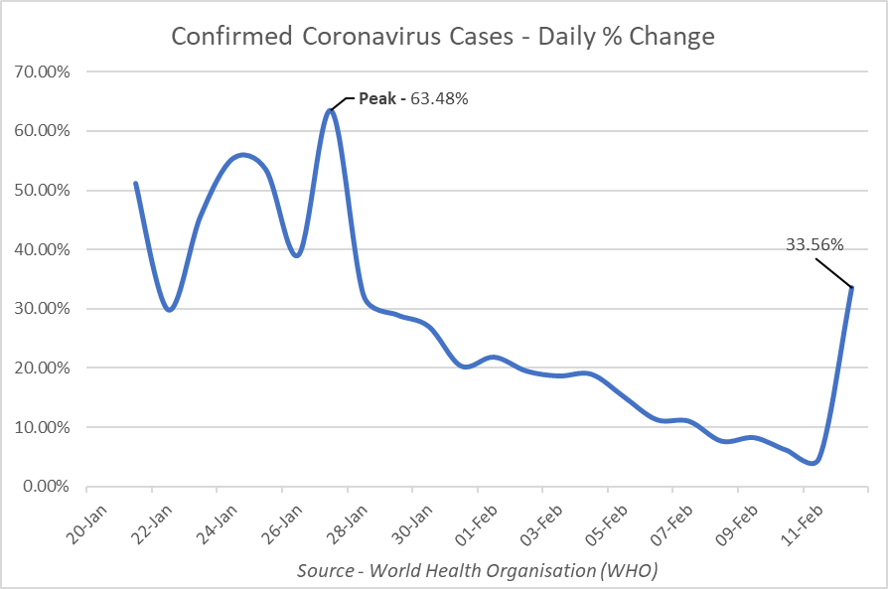 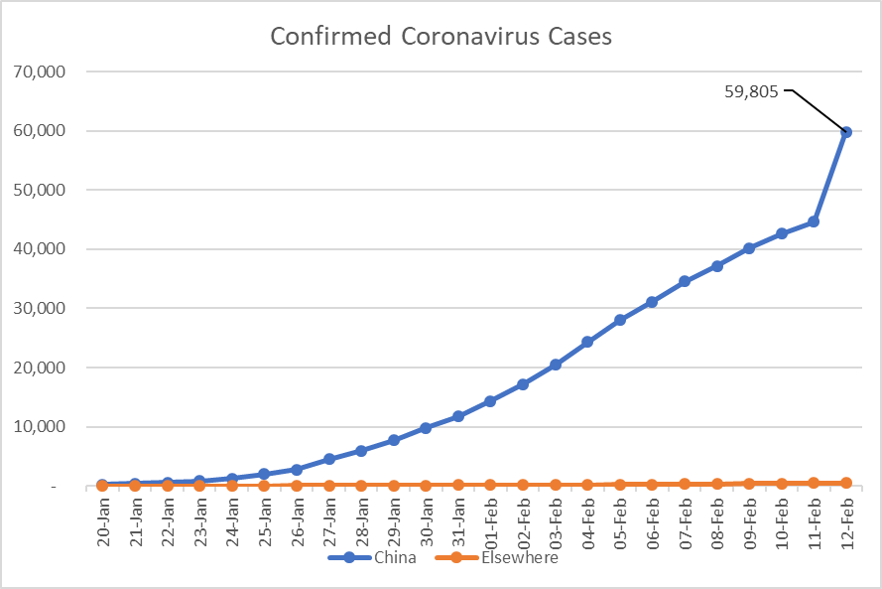 This surge, an increase of around 15,000 in just one day, came after Hubei province began to include 'clinically diagnosed' patients in the statistics.

However, this will only add to doubts over whether China is reporting accurate numbers of infections and deaths, hence yesterday's souring in sentiment.

In FX, this resulted in solid demand for the Japanese yen, which added around 0.25%, as well as the Swiss franc, which traded at its strongest levels against the euro in almost five years.

The dollar also saw a steady bid, though ended the day unchanged against a basket of peers, with the greenback continuing to benefit from the 'best of a bad bunch' narrative.

In contrast, both risk-sensitive antipodeans lost ground, with the Aussie dollar shedding 0.1%, and the Kiwi dollar losing 0.3%.

The euro also struggled, dipping 0.2% for an 8th straight daily loss, as the common currency remained pressured by a dismal run of economic data, the pricing of emerging German political risk, and the lack of desire to hold euros owing to the bloc's deeply negative yields. 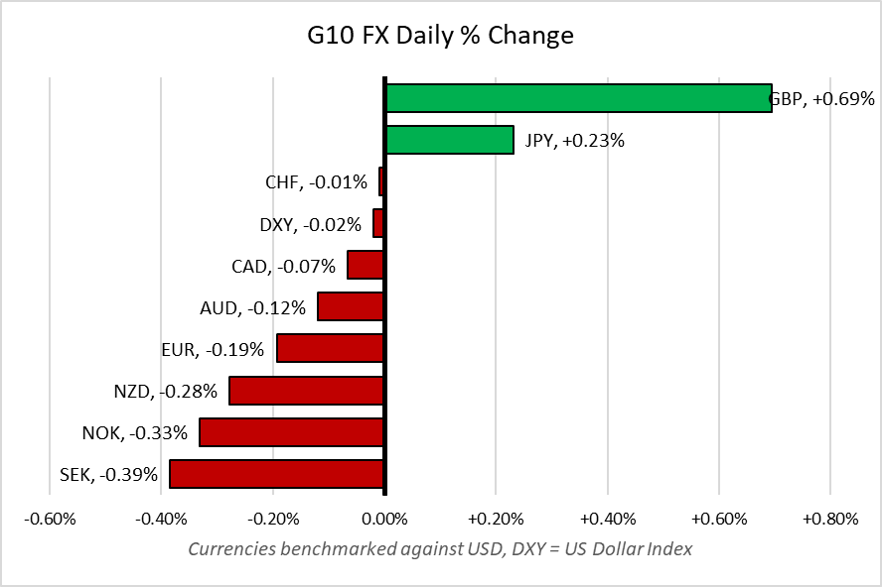 Across the pond, the benchmark S&P 500 skidded into the close, ending the day 0.15% lower, as coronavirus concerns and the announcement of a reduction in Fed repo ops exerted pressure.

Despite the equity market rally, there were healthy inflows into the bond market, perhaps owing to investors hedging riskier positions by taking out exposure to fixed income. In the Treasury market, 10-year yields - which move inversely to price - were a couple of basis points lower, while the curve remains inverted from 3-months out to 5-years.

Yesterday's main data highlight came from the US, in the form of January's CPI inflation figures.

Headline inflation rose at its quickest pace in 18 months, at 2.5% YoY, however core CPI - which excludes volatile food and energy prices - remained at 2.3% YoY for the fourth straight month. 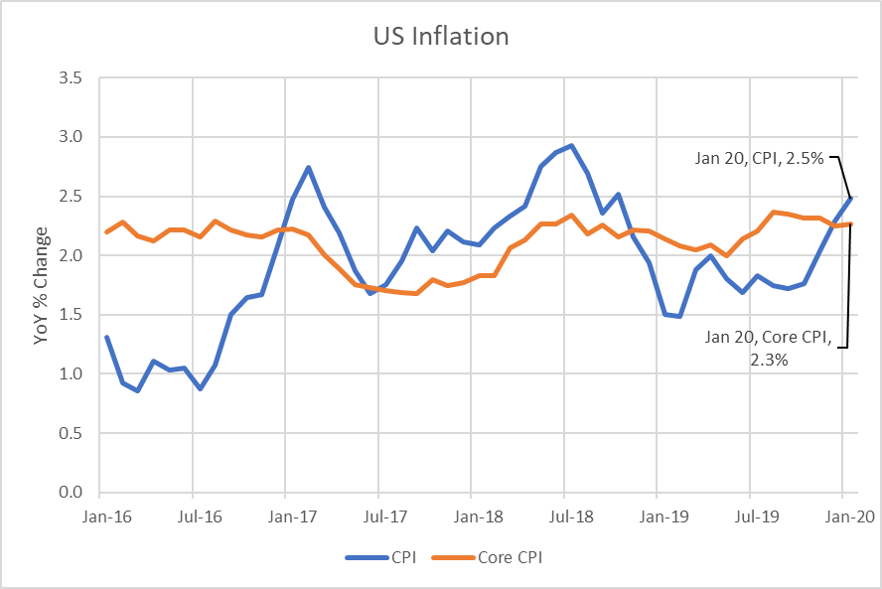 The uptick in headline inflation won't, however, be of too much concern for the Fed. Primarily, this is due to the FOMC's comfort with allowing inflation to run hot and prolong the present economic expansion; while the recent decline in energy prices will likely mean the heightened level of inflation will prove to be transitory.

As such, the print had little to no impact on the dollar, and was largely inconsequential to the US economic outlook.

Markets will get a health-check on the all-important US consumer today, with January's retail sales report and February's consumer sentiment figures both due.

Retail sales are expected to have increased by a solid 0.3% MoM at the headline level, with a gain of the same magnitude also expected for both the excluding-autos and control group measures; the latter being the basket of goods which feeds directly into the GDP report. 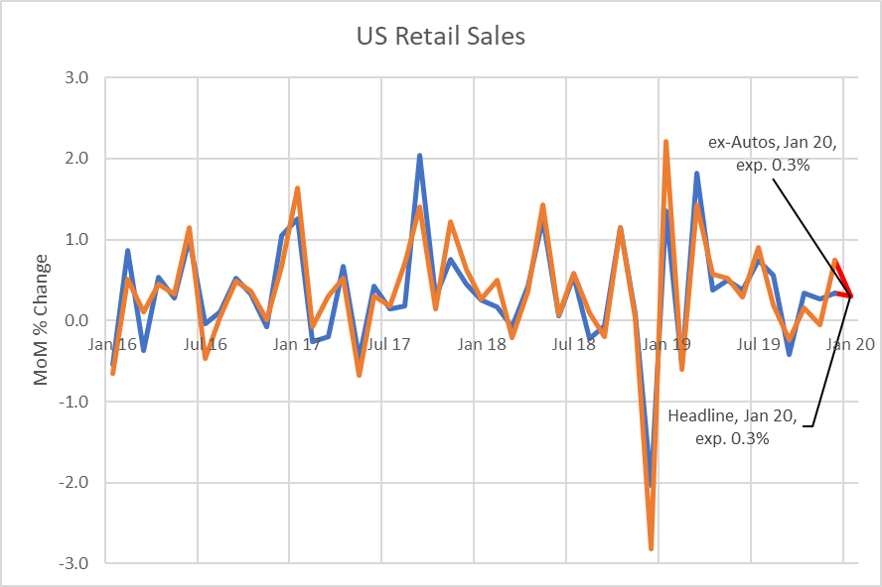 Meanwhile, sentiment is expected to remain solid, with the University of Michigan's consumer index set to print 99.5, a hair's breadth below January's 8-month high of 99.8. 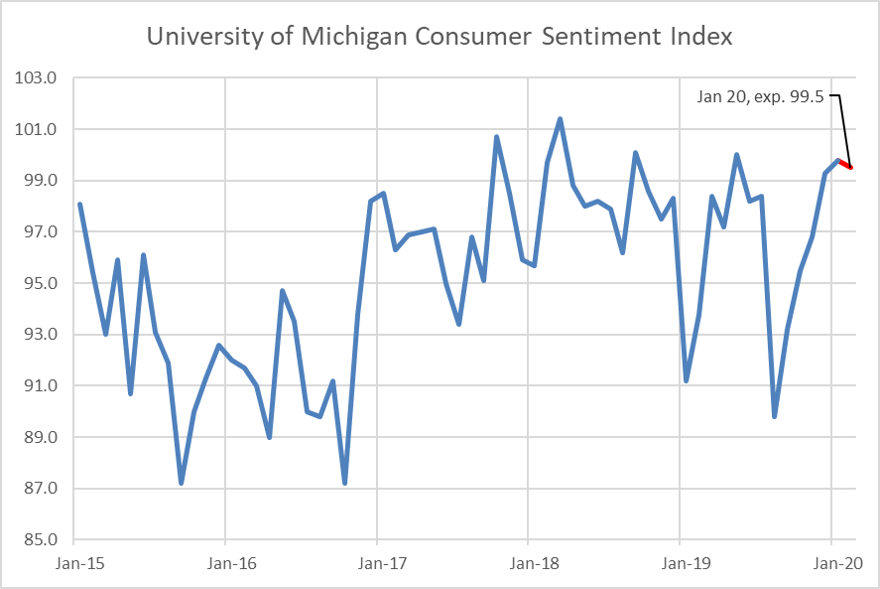 Combined, the reports are set to paint a healthy picture of the US consumer, with last year's solid pace of spending set to have continued in January, and the sentiment index pointing to this trend continuing in the coming months.

Therefore, with the US consumer continuing to almost solely underpin the present expansion, one can expect a solid pace of growth in the months ahead; however it will be a welcome boost for the US economy if other sectors of the economy can begin to take some of the burden away from personal consumption.

Looking ahead to the next 7 days, the data calendar is busy, though the week will likely get off to a sluggish start owing to Monday's President's Day holiday in the US.

Nonetheless, next week's data slate includes a hefty amount of UK releases, including the latest labour market, inflation and retail sales report, along with February's flash PMI surveys. Markets will look for the former to show the first signs of 'hard' data improving since the election, while February's PMIs will be expected to maintain the healthy advance seen last month.

Elsewhere, minutes from the latest FOMC, ECB and RBA meetings will be parsed for any hints on the respective policy outlooks, while inflation figures will also be eyed from Canada and the eurozone, with the latter also releasing flash PMI figures next Friday.