The latest market highlights and our views on the key developments as sterling slumps as the UK and EU outline plans for upcoming trade negotiations; manufacturing PMIs show signs of a rebound; and coronavirus concerns continue

The UK & The EU - Drawing the Battle Lines

The UK only left the EU on Friday, but already the battle lines have been drawn for the upcoming 11 months of negotiations over the future UK-EU relationship. In speeches on Monday, both EU Chief Negotiator Michel Barnier and Prime Minister Boris Johnson laid out their plans for a post-Brexit trade deal, however significant differences between the two sides are already apparent, despite both aiming for an ambitious, 'Canada-style' agreement.

Said differences can be broadly split into four strands, as per the below:

The most important among these appear to be the so-called 'level playing field' provision, and a deal on fisheries. The former, designed to ensure that the UK doesn't undercut EU standards after a trade deal is signed, appears to be the most contentious issue.

Barnier has stated that the offer of an 'exceptional' free trade agreement (FTA) depends on such a level playing field provision, and that the greater the degree of divergence on the UK's part from the EU's rules, the lesser the degree of single market access that will be granted.

In contrast, PM Johnson stated that there is 'no need' for such an FTA to involve the UK becoming an EU rule-taker, and that the UK would not be engaging in a race to the bottom on standards once (or if) a deal is signed.

This, however, is unlikely to be what is concerning the EU. The level playing field provision appears to be primarily concerned with the ability to diverge, and not whether the present government has a desire to diverge. For example, the EU wouldn't want a new UK government in five years' time to significantly diverge from the bloc's rules, a scenario that could happen without such a safeguard.

It is, though, important to note at this point, that the negotiating mandates laid out yesterday are only drafts, and that talks won't properly get underway until early-March. As such, at this stage it is just political posturing and chest-thumping; with the eventual aim of the two sides softening their 'red lines' in order to find a landing zone in which an FTA can be struck.

Despite this, sterling endured a torrid time on Monday. Against the dollar, the pound shed more than 2 big figures, ending the day 1.5% lower - the biggest one-day fall since mid-December - dipping below the $1.30 handle.

The pound also slid against the euro, shedding around 1%, falling to a 10-day low.

Sterling's declines came as market participants once again began to fret about the possibility of no UK-EU FTA being struck, however such fears appear overblown at this point.

As such, the pound remains a buy on dips in my view.

Meanwhile, Monday's major data releases came from the manufacturing sector, with the customary PMI surveys heralding the start of a new month.

It should, however, be noted that the surveys don't include the full scale of the ongoing coronavirus outbreak, with the data compiled largely before the scale of the virus became clear.

In the eurozone, there are further signs that the ongoing manufacturing slowdown may have bottomed out, with January's final PMI ticking up to 47.9 - representing the slowest rate of contraction since April. Should the ongoing manufacturing uptick continue for the eurozone, this would be a major boost to the economy, particularly as any spill-over effects appear to have been avoided. 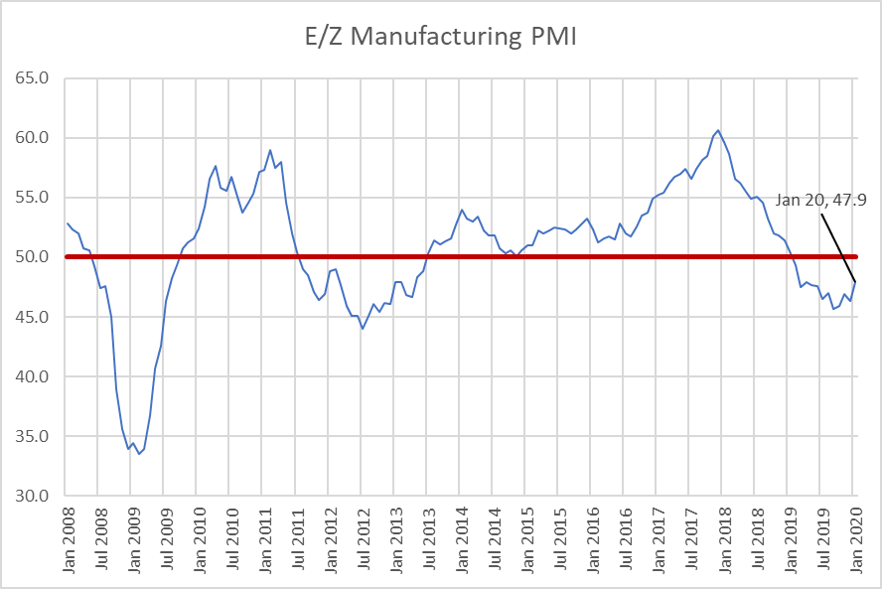 Here in the UK, final survey data for January pointed to the production sector emerging out of contractionary territory for the first time in 8 months. The PMI read 50.0 in January, confirming the post-election 'Boris bounce' seen in the flash estimate, while gains in business confidence, new orders, and employment are positive leading indicators for the coming months. 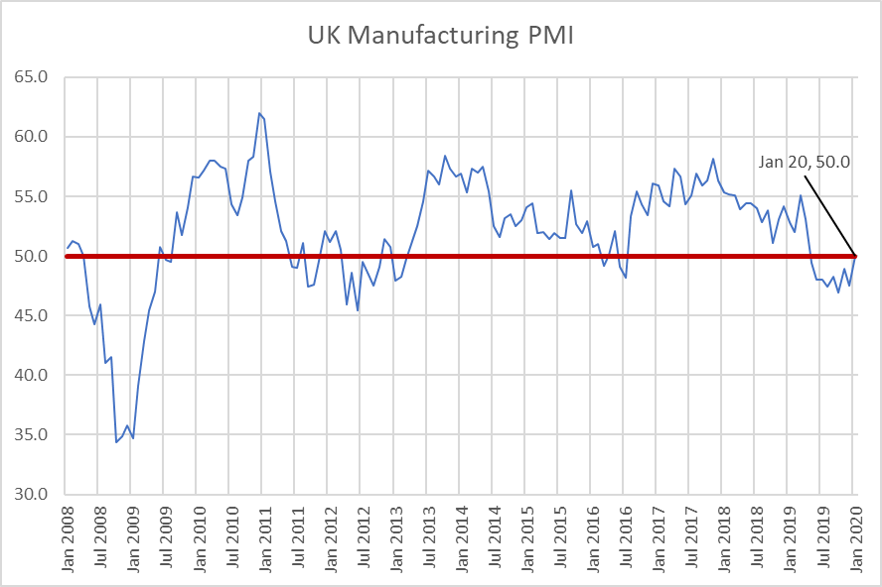 Across the pond, the ISM's manufacturing gauge smashed expectations, surging to a 6-month high of 50.9. 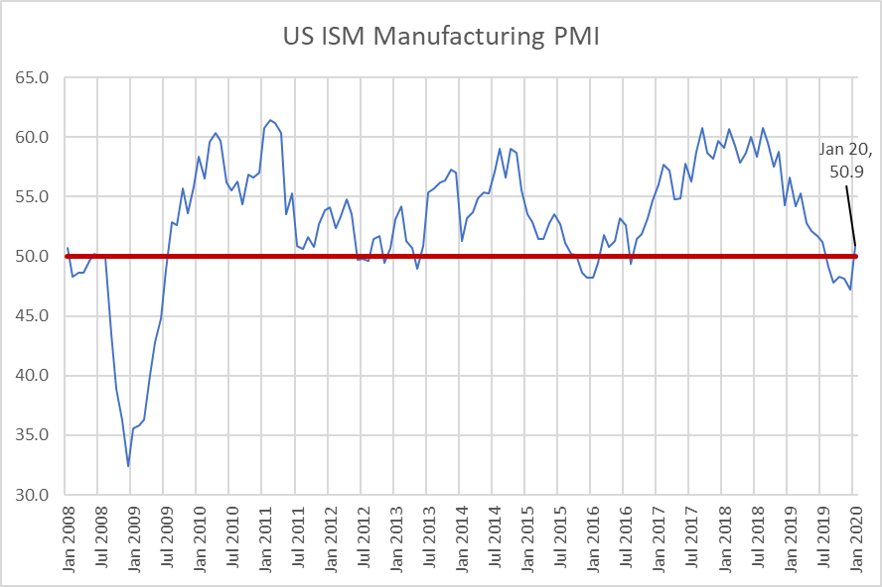 This chimes with Fed Chair Powell's recent comments that the manufacturing slowdown in the US appears to be over, likely to come as a welcome boost to the consumer-dependent US economy.

The details of the ISM report also gained across the board, with the new orders subcomponent surging to 52.0 - a 7-month high - and prices paid increasing to 53.3 - a 9-month high. 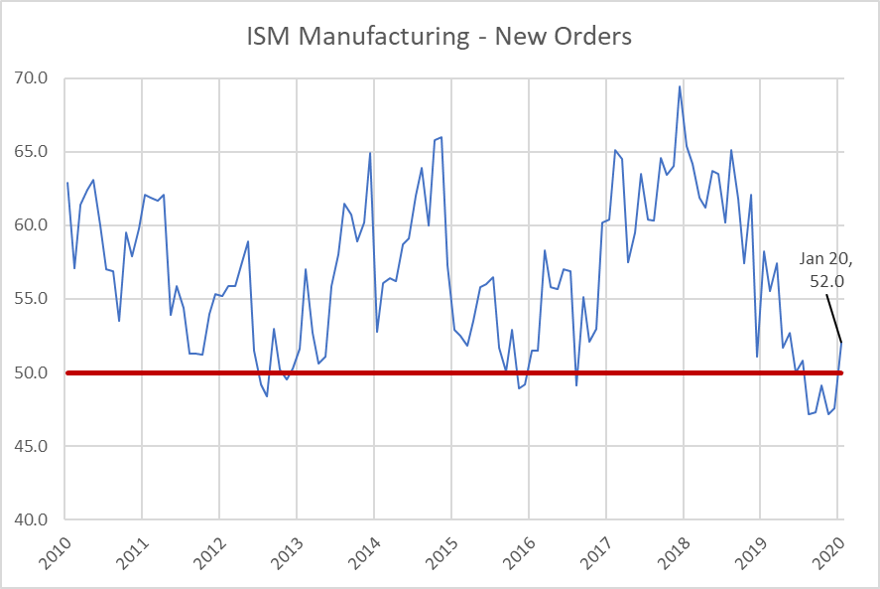 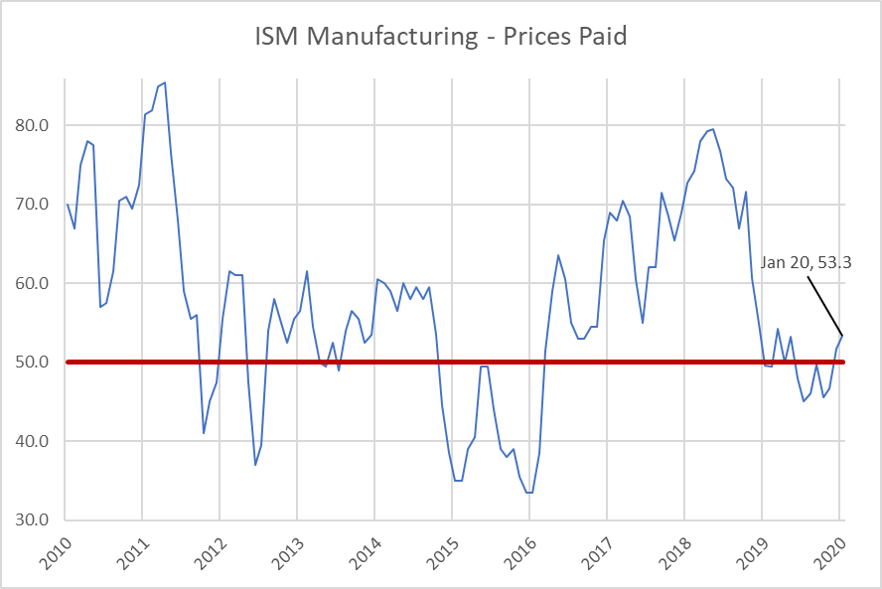 The upside surprise on the PMI gauge resulted in bids for the dollar, with the greenback ending the day around 0.4% higher against a basket of peers; recovering from Friday's month-end rebalancing driven sell-off.

Looking more broadly, risk sentiment remains intrinsically linked to the ongoing coronavirus outbreak, with investors still attempting to determine the impact that the virus will have on the Chinese economy.

It is clear that the outbreak will have a significant detrimental impact on the Chinese economy - at least in the first quarter - with the government set to be considering a downward revision to the annual growth target, and reportedly asking for leniency in relation to pledges made in the phase one trade deal as a result of the virus.

As such, risk appetite remains volatile, and is likely to quickly turn on a sixpence.

Nonetheless, sentiment was relatively steady on Monday, apart from in the oil market, where prices cratered after reports that Chinese demand may be reduced by up to 20% due to the virus.

Even talk of emergency OPEC production cuts - perhaps in the region of 500k barrels per day - weren't enough to arrest the slide in crude prices, with both Brent and WTI tumbling throughout the day.

At the close, global benchmark Brent settled almost 4% lower, falling to $54.45bbl. Meanwhile, WTI crude shed 2.8%, briefly dipping below $50bbl, with both blends tumbling to 12-month lows. In fact, WTI has technically now fallen into a bear market, having declined more than 20% from the January highs.

Elsewhere, equity markets on both sides of the Atlantic gained ground. In Europe, the pan-continental Stoxx 600 added 0.3%, while the US S&P 500 closed 0.7% higher, rebounding after Friday's steep losses.

In FX, safe-haven currencies faced modest headwinds, with the Japanese yen and Swiss franc ticking around 0.3% lower. The risk-sensitive antipodeans - which tend to strengthen in times of improving risk appetite - weren't able to take advantage of the risk-on environment, owing to a stronger greenback.

Monday's scoreboard is below: 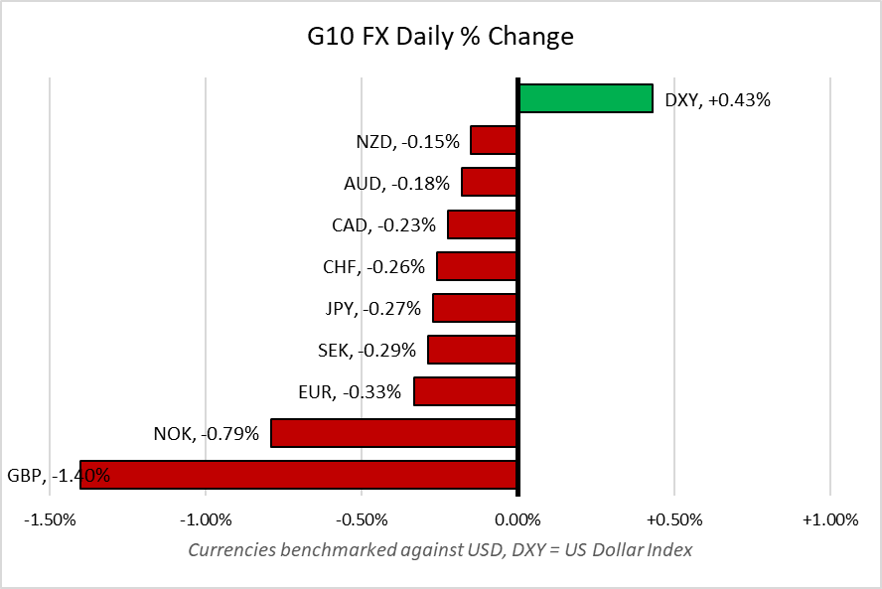 Today is one of those days where the economic calendar is sparsely populated, meaning that focus will likely remain on the developing coronavirus outbreak, which will continue to drive risk appetite.

In terms of highlights, here's a selection of today's notable releases: