The latest market highlights and our views on the key developments as sterling holds steady as the labour market remains healthy; the euro's woes continue; sentiment sours after Apple's guidance warning; and UK inflation and FOMC minutes are in focus today

Starting with jobs, unemployment remained at a 45-year low 3.8% in the three months to December, continuing the 6-year decline in the joblessness rate. 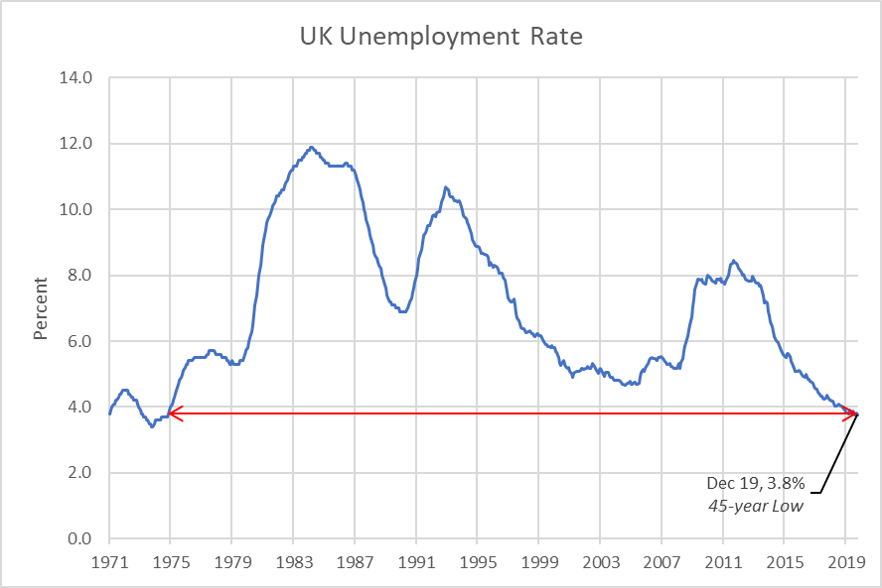 Meanwhile, employment continues to increase, with the employment rate now standing at a record high 76.5% - 0.6pp higher than a year prior - with employment gains driven largely by the biggest increase (+203k) in full time employment in almost six years.

Furthermore, increasing numbers of persons are returning to the labour force, indicative of further employment gains in the months ahead, and the labour market possessing a greater degree of slack than had been previously thought. In the three months to December, for example, a net 171,000 people returned to the labour force (either through employment or active job-seeking). 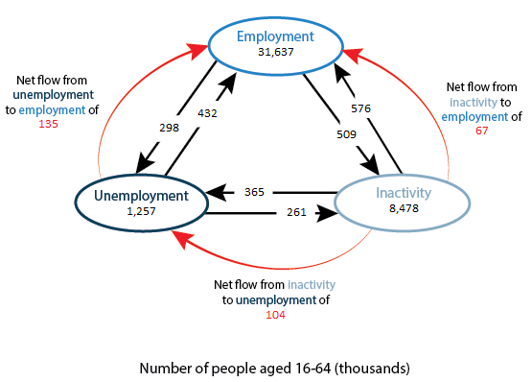 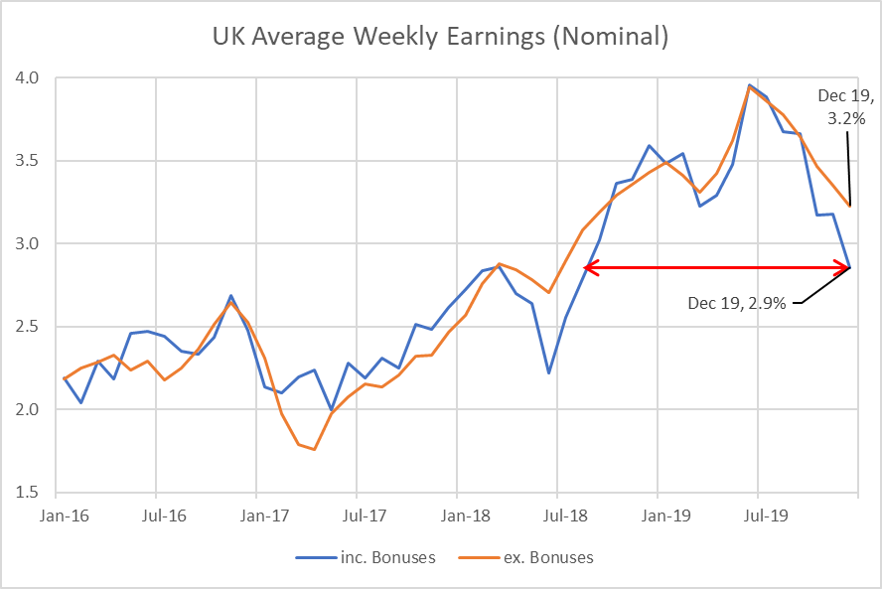 It is, however, important to note that one of the primary factors depressing total earnings growth is the unusually high level of bonuses paid in October 2018, and the return to a more usual level of bonuses in 2019, thus skewing the YoY figure. In real terms, meaning earnings adjusted for inflation, annual growth in regular pay stands at 1.8% YoY.

Overall, the figures continue to paint the UK labour market in a good light; with employment and real earnings continuing to rise, and unemployment remaining low. With some degree of slack remaining, business sentiment improving since the election, and more workers likely to return to the labour force, the solid nature of the jobs market should persist; thus providing the BoE with ample reason to leave policy on hold for the remainder of the year.

The solid labour market numbers, combined with confirmation that the budget would be going ahead as planned on 11th March, resulted in a decent day for sterling.

Against the dollar, the pound ended the day unchanged, completing a round trip that saw cable rise as high as $1.3050. However, the pound struggled to hold its gains above the 20-day moving average, sliding throughout the afternoon to close flat on the day.

Sterling also ended the day higher against the euro, benefitting from a weaker common currency, ending the day 0.3% higher, breaking to a fresh post-election high of €1.2075. A break above the election night highs, at €1.2080, remains the next target for any further upside movement. 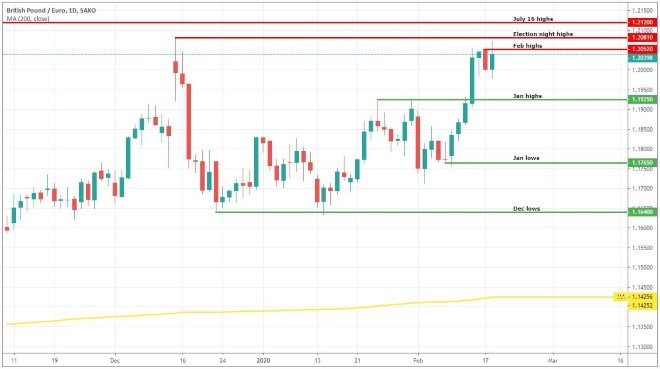 Across the Channel, yesterday brought yet more bad economic news from the eurozone, with a disappointing round of sentiment surveys from the ZEW economic institute.

The ongoing coronavirus outbreak is clearly having a significant, detrimental impact on sentiment across the bloc, with the eurozone sentiment indicator falling more than 15 points to 10.4.

In Germany, Europe's economic engine room, the decline in sentiment was even more pronounced, falling 18 points from last month to 8.7, emphasising the fragile nature of the economy. 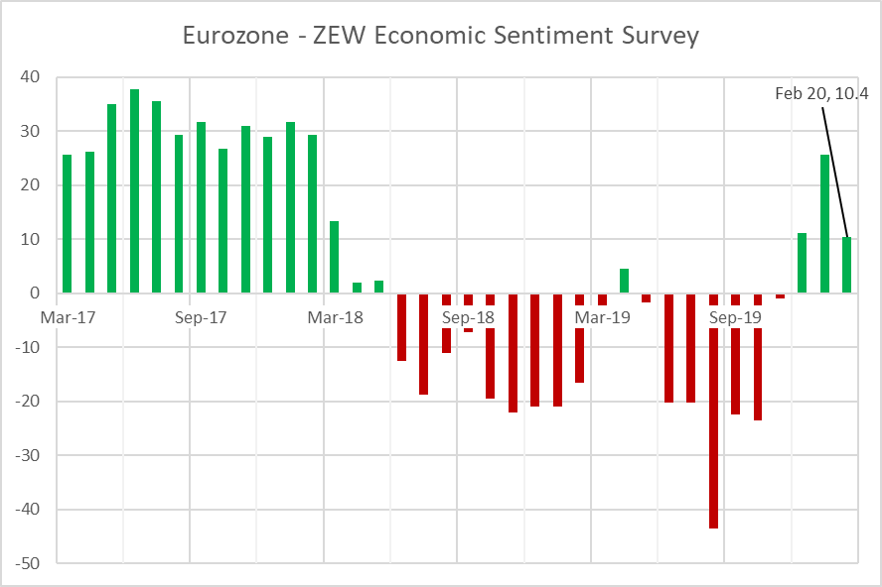 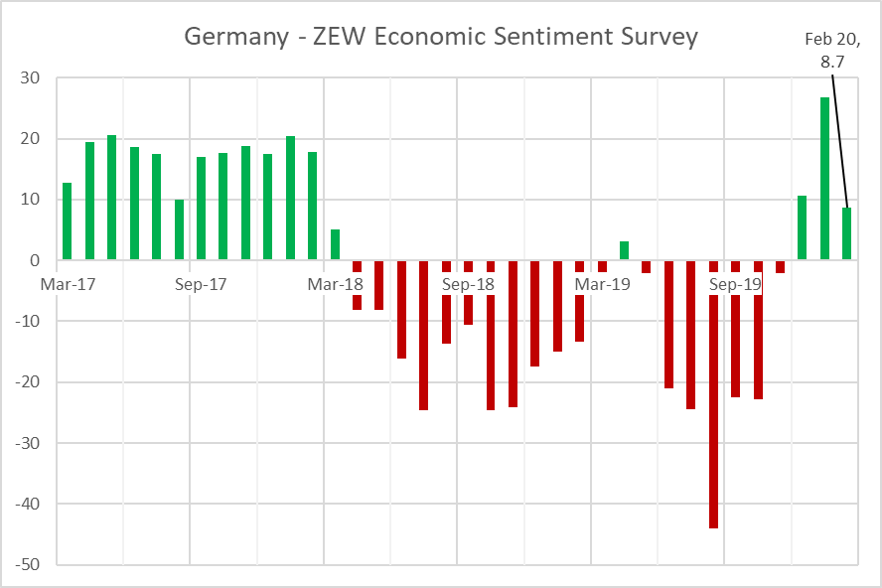 The dismal sentiment report, combined with ongoing concerns about the German political landscape, deeply negative yields across the bloc, and the likely significant impact of the coronavirus outbreak, piled further pressure onto the already beleaguered euro.

The common currency ended the day 0.2% lower against the greenback, recovering earlier losses which saw the pairing fall below the $1.08 handle for the first time since Spring 2017.

Technically, this took the pairing into the so-called 'Macron gap' which was formed three years ago after the French election result saw the euro jump higher. Below this gap, the next support comes in the low-$1.07s. 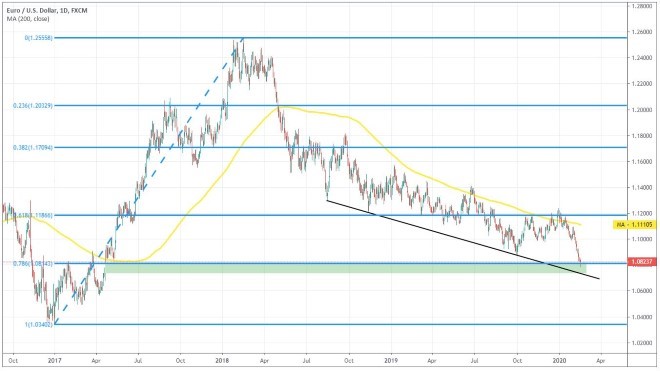 Elsewhere, sentiment was somewhat shaky after Apple's overnight guidance warning -- noting that Q1 revenue targets would not be hit due to the coronavirus -- focused attention squarely on the impact of the epidemic on global demand and potential supply chain disruption.

In FX, these concerns manifested themselves in the form of steady demand for the Japanese yen and Swiss franc, while the dollar also extended its gains. The greenback added 0.2% on Tuesday, closing in on a three year high after a fifth straight daily gain.

These haven flows were also in evidence in the bond market, where 10-year Treasury yields declined by almost 4bps, and the 3-month 10-year spread once again inverted. Gold prices also gained ground, with the precious metal ending the day 1% higher, above $1,600/oz in the spot market, a 6-week high.

Conversely, the risk-sensitive antipodeans faced headwinds. The Aussie dollar ended the day 0.25% lower, at a 1-week low; while the Kiwi dollar also struggled, shedding more than 0.7%.

Meanwhile, equity markets were also dragged lower by renewed concerns over the coronavirus. In Europe, the pan-continental Stoxx 600 ended the day around 0.5% lower, while London's FTSE 100 shed 0.7%, with HSBC leading the declines.

In the US, the benchmark S&P 500 ended the day 0.29% lower, as poorer than expected Walmart earnings and the aforementioned Apple news weighed on sentiment. The Dow also closed in the red, though the tech-heavy Nasdaq pared early losses to close unchanged.

The UK's economic health-check continues today, with January's inflation figures due this morning.

The pick-up in inflation will likely come as the impacts of the energy price cap reduction begin to fade from the figures, though the continued lacklustre pace of core inflation implies limited inflationary pressures in the UK economy.

As a result, the inflation data will do little to alter the BoE's policy outlook, with policymakers already forecasting sub-target inflation until at least the end of 2021, and the MPC appearing primarily concerned with potential downside risks to the growth outlook at present.

Across the pond, monetary policy will be in focus, with minutes from the January FOMC meeting, and a host of Fed speakers, making for a packed schedule.

Market participants will parse the minutes for any hints on the policy outlook, however they are somewhat stale given Fed Chair Powell's semi-annual Humphrey-Hawkins testimony last week.

In fact, those hoping for hints on the policy outlook will likely be disappointed, with the FOMC clearly comfortable with the present policy stance, and likely to repeat that it is 'appropriate' barring a 'material reassessment' of the economic outlook.

Meanwhile, of today's speakers, remarks from FOMC voters Kashkari, Kaplan and Mester are likely to be of most interest, though all have indicated that they are content with present policy settings. Remarks from non-voters Bostic and Barkin will likely be of little interest.