The latest market highlights and our views on the key developments as sterling slumps after dismal GDP data fuels odds of BoE rate cut; US CPI comes into focus today; and Q4 earnings season kicks off on Wall St

The doves continue to circle over the Bank of England, with yesterday's GDP and output figures doing little to quash expectations that the BoE will soon look to add stimulus to the UK economy.

Monday's data showed the UK economy shrinking by 0.3% in November, poorer than the expected stagnation, and below the - upwardly revised - 0.1% growth recorded in October.

However, there were slightly brighter signs in the rolling 3-month average of GDP, with the economy growing by 0.1% in the 3 months to November. This expansion was, however, driven solely by upward revisions to growth in September and October, rather than by organic growth in November. 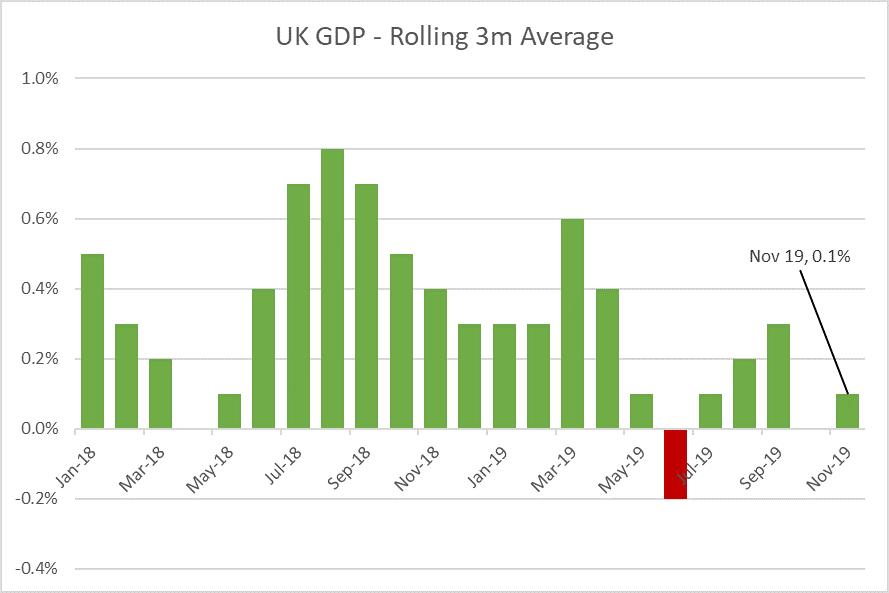 Digging into the details of the report, all areas of the UK economy struggled in November - however this is largely down to easily-attributable factors.

In the services sector, where output decreased by 0.3% MoM, election-related uncertainty likely dampened activity. Meanwhile, declines in industrial and manufacturing production - which shrank by 1.2% and 1.7% MoM respectively - were largely due to temporary weakness, which should creep out of the figures in the coming months.

However, despite the data not being as bad as the headline number makes out, the below consensus growth rate added further fuel to the rate cut fire, which had been ignited by dovish comments from BoE Governor Carney, and external MPC members Tenreyro and Vlieghe, last week.

In fact, markets now price in an almost even chance of a rate cut at the January meeting in a little over two weeks' time, as the below from Bloomberg shows. This probability stood at just 5% on Thursday morning.

Now, it is at this point where I must say that I believe the market to be getting a little ahead of itself, and that it is perhaps placing too much emphasis on out-of-date data points which have likely been skewed to the downside by election related uncertainty.

For example, forward looking indicators are beginning to show signs of a post-election bounce in the UK economy - something which is evident among both businesses and consumers. For businesses, Deloitte's monthly survey of UK CFOs saw its largest rise in business sentiment on record in January; while early measures of consumer confidence have jumped, including one measure by Barclaycard jumping to a near 3-year high.

Furthermore, additional reasons why the BoE appear unlikely to cut in January include the culmination of Governor Carney's term on 15th March and the appointment of Andrew Bailey as his replacement; the upcoming Budget announcement which will likely result in a fiscal boost to the economy; and - for now - the receding risk of a no-deal Brexit.

However, perhaps the most significant reason why the BoE are likely to hold off on loosening policy is due to their limited policy headroom. With the Bank Rate just 75bps above the lower bound, the BoE would likely want to keep their powder dry in case of an economic downturn. BoE policymakers simply don't have the luxury of being able to take out 'insurance' rate cuts as their US counterparts on the FOMC did last year.

But, despite the above, it is not my opinion that matters here. It is the opinion of the members of the MPC that matters, and the market's perception of their opinions that we must trade. Therefore, if policymakers are sending - and continue to send - dovish messages, that is - and will continue to be - negative for the pound.

This was in evidence on Monday, where the pound ended the day below the $1.30 handle for the first time in 3 weeks, chalking up a 5th straight daily decline against the greenback, dipping 0.4%. 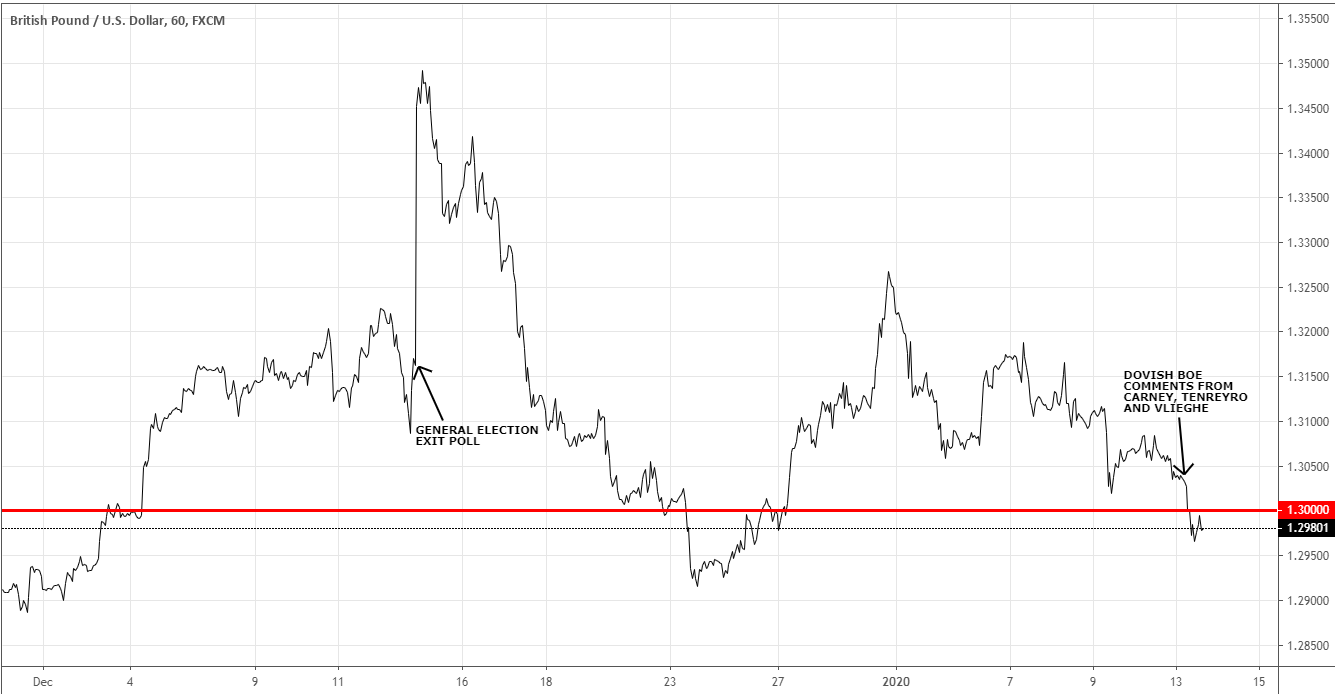 The pound performed similarly poorly against the euro, heading for a 3rd straight daily decline, ending the day 0.6% lower.

Across the Channel, monetary policy was also in focus, as various reports emerged about the upcoming ECB Strategy Review.

President Lagarde plans to announce the start of the strategy review - the first since 2003 - at the 23rd January policy meeting, and has reportedly requested that policymakers avoid making public comments before the review gets underway.

Now that we know when the review will get underway, attention will likely turn to what the review will cover. Investors are set to focus primarily on any changes to the inflation target - in particular whether the addition of symmetry is made to the aim.

Such an alteration would mean that, to compensate for periods of undershooting the 2% goal, policymakers would allow inflation to overshoot the target, thereby, on average, hitting the inflation goal over the medium-term. This would, however, likely mean looser policy for longer, potentially pressuring the euro.

This, however, had little - if any - discernible impact on the common currency on Monday, with the euro remaining rangebound all day, chalking up a modest 0.15% daily gain against the dollar.

Today's only notable data release comes from the US, in the form of December's CPI inflation report.

Headline inflation is set to have risen at its fastest pace in more than 12 months in December, with CPI expected to have increased by 2.3% YoY.

Meanwhile, the core CPI measure - which excludes the often-volatile food and energy prices - is also expected to have increased at 2.3% YoY.

Both prints falling in line with expectations would show inflation edging just above the FOMC's 2% aim, however the data is set to have little, if any, effect on the policy outlook.

Firstly, the Fed have clearly signalled that - barring a sharp economic downturn - monetary policy is set to remain on hold throughout the course of the next 12 months. Inflation running a little hotter than target will not change this.

Secondly, and perhaps more importantly, there are some downside risks to inflation over the medium-term, particularly stemming from the labour market. Friday's payrolls report showed that, while unemployment remained at a 50-year low, there are no real wage pressures in the US labour market, with earnings increasing by just 2.9% YoY.

Should this sluggish pace of earnings growth continue in the coming months, this will likely exert little in the way of upward pressure on prices.

For the dollar, the inflation print is likely to be something of a non-event, with focus remaining on geopolitical issues including developments in the Middle East and this week's planned signing of the phase one US-China trade deal.

Away from the data, a few notable central bank speakers are due to make remarks today.

Markets are likely to focus primarily on remarks from New York Fed President Williams, with the typically dovish policymaker being one of the FOMC's three 'big-hitters'. Investors will pay close attention to remarks on the policy outlook, as well as any comments on the Fed's ongoing interventions in the repo market.

Finally, fourth quarter earnings season kicks off on Wall Street today, with banks getting us underway.

This morning, earnings reports are due from JPMorgan Chase, Citi and Wells Fargo - all useful alternative barometers of the performance of the US economy, with the results typically reflecting the broader health of the economy.

Of particular interest in the results will be the impact that last year's FOMC rate cuts have had on net interest margins, as well as - in the case of JPM and Citi - how trading and investment banking revenue has performed.