The latest market highlights and our views on the key developments as a dismal December for UK retailers sees markets price in a greater chance of a BoE cut; US macro releases remain solid; and markets await this week's BoJ, BoC and ECB policy decisions.

Another nail was hammered into the BoE rate cut coffin on Friday - at least in the market's view - after a dismal December retail sales release.

Data showed that there had been no Black Friday or Christmas boost for UK retailers, confirming recent reports from major High Street retailers; with the ONS reporting sales falling by 0.6% MoM last month, significantly short of the expected 0.7% rise. 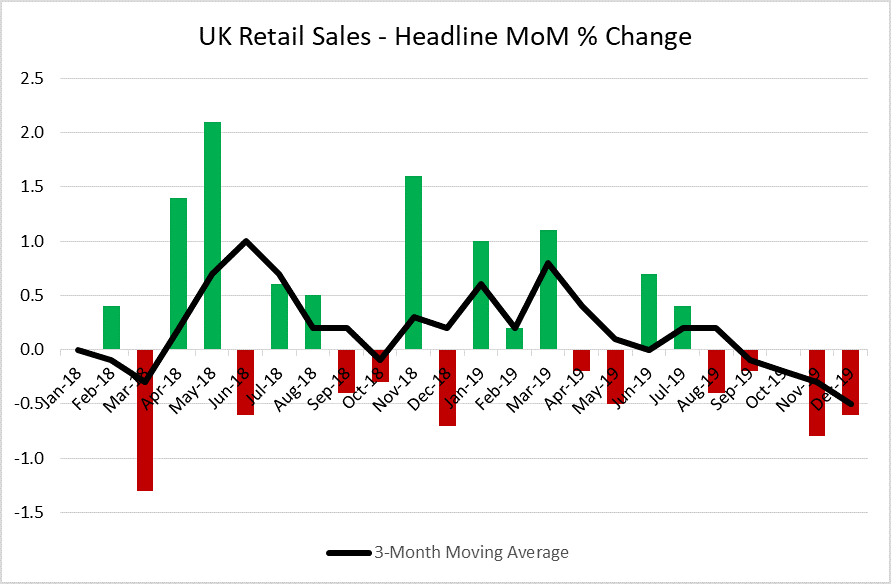 Excluding fuel, the sales picture was no prettier, with this measure of trade declining by 0.8% MoM for the second straight month. In fact, neither sales measure has recorded any sales growth over the last 5 months, the longest such streak since ONS records began in 1996. 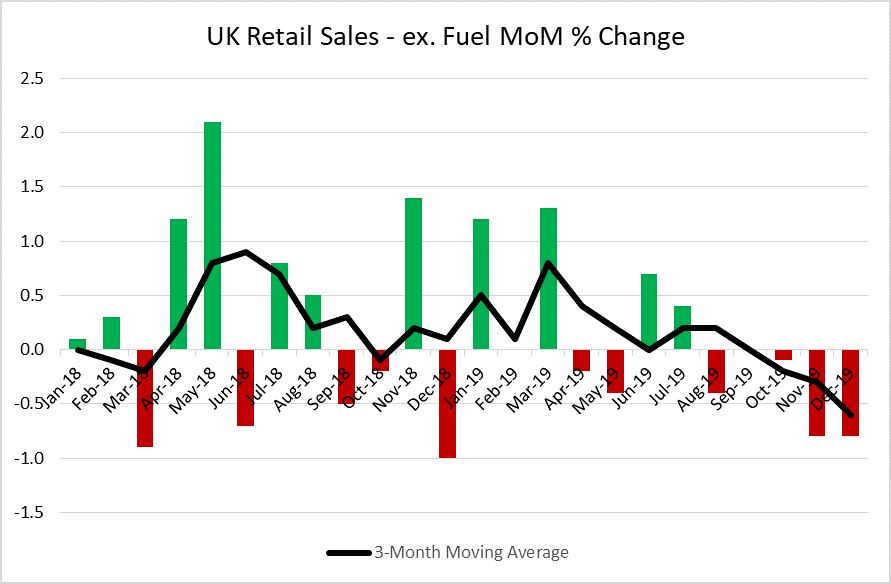 Of course, the dismal release further empowered the Bank of England's doves, and saw the market assign an even greater probability to a rate cut as soon as the end of the month. Having stood at around 10% this time last week, markets now price a roughly 75% chance of a 25bps cut this month (chart below) after last week's miserable data slate; including sub-par GDP, inflation and retail sales figures.

Despite the market continuing to price in a looser policy stance from the BoE, I continue to believe that now is not the time to be considering providing policy stimulus.

I hold this view due to; a significant amount of political uncertainty having been removed from the economy after December's general election result; March's Budget being set to bring with it a sizeable fiscal stimulus; thus far, economic releases only referencing the pre-election period; and, the fact that it is important for policymakers to keep their limited powder dry for when it is really needed in the event of a sharp downturn.

Nonetheless, despite this, it is the markets' perception of the BoE's view that matters. That perception is currently that the BoE will look to cut rates as soon as the end of the month, hence the recent pressure on the pound.

Sterling ended the day 0.6% lower against the dollar on Friday, erasing gains seen in a rally before the retail sales release. Having briefly broken above the recent downtrend resistance, sterling stumbled after the dismal sales report, ending the day below the recent uptrend support (shown in red on the below chart). 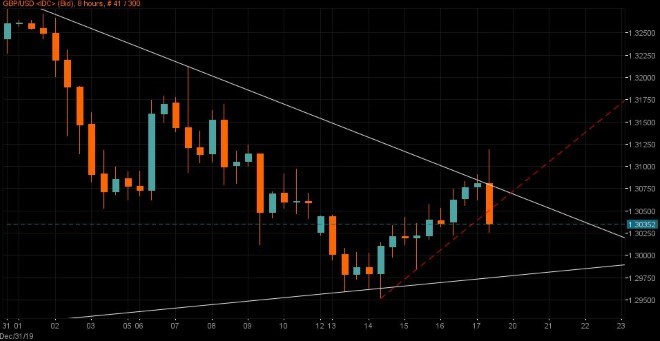 Against the euro, sterling also struggled, shedding 0.3%, ending the week just above the €1.17 handle.

Across the pond, and in contrast to the UK, economic data continues to point to the US economy expanding at a healthy clip.

Friday's primary release was the preliminary release of January's University of Michigan consumer sentiment report. The index came in slightly softer than expected, at 99.1, however this continues to represent a solid level of sentiment, and should see consumers continue to power the ongoing economic expansion in the coming months. 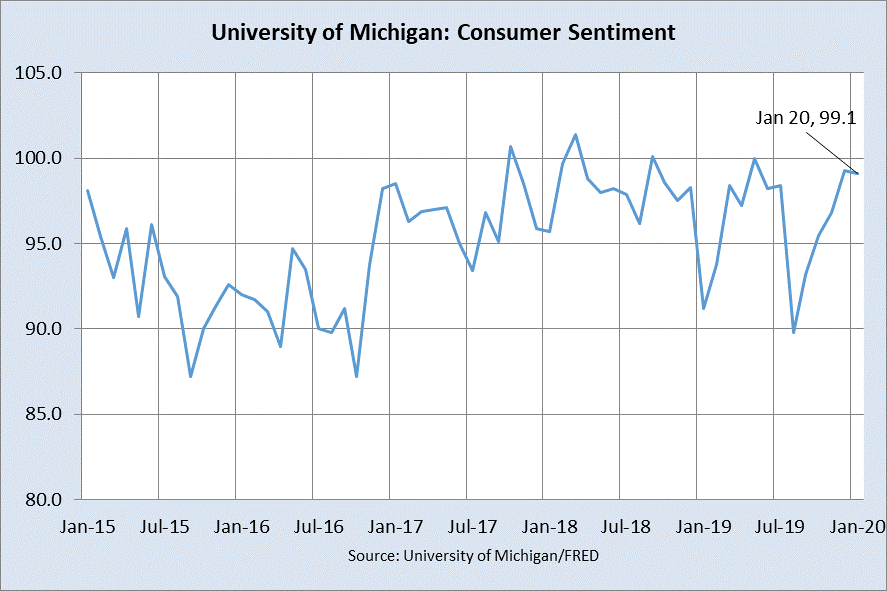 Meanwhile, December's housing starts report smashed all expectations out of the park. Last month saw 1.608mln starts recorded across the US, nearly 300,000 more than had been expected, and representing a 16.9% MoM increase in construction activity, with starts now standing at a 13-year high.

While some of the increase can be put down to unseasonably warm weather, strong releases over the last two months may point to a more sustained upward trend in housebuilding, which would be a major boost for the US economy.

Elsewhere on Friday, however, there were signs that the ongoing manufacturing slump has not yet bottomed out. Industrial production fell by 0.3% MoM in December, a disappointment after November's downwardly revised 0.8% increase, and the third month out of the last four that a fall in production has been recorded.

The dollar, however, largely ignored the production disappointment, with markets instead focused on consumers remaining upbeat, and on signs of a possible turnaround in the housing sector.

The greenback ended Friday with a gain of around 0.3% against a basket of peers; with both antipodeans the major victims of the buck's advance, shedding 0.5% apiece.

The solid economic releases also pushed US equities higher, with the benchmark S&P 500 gaining 0.39%, closing at another fresh all-time high.

However, a word of caution on the recent equity rally.

Much of the gains appear to have been driven by the markets' perception of the Fed restarting asset purchases, thus expanding their balance sheet, in an attempt to relieve pressures in the overnight repo market.

Many observers believe this to be the Fed conducting some sort of 'stealth QE' programme in an attempt to stimulate the US economy. It is not. The recent balance sheet expansion is temporary, and is purely designed to ensure effective monetary policy transmission, not to ease financial conditions as the market appears to believe.

There is a real risk that markets have become too hooked on this plentiful supply of 'easy money'. When the Fed pull back from the repo market, equities are at risk of a substantial pullback also.

A fresh trading week begins with absolutely nothing in the way of notable releases on the economic calendar.

In fact, with today being Martin Luther King Day, and US markets being closed in observance of the holiday, volatility will likely remain muted and G10 FX should remain subdued throughout the day ahead.

Looking to the week ahead, the first G10 central bank decisions of the year are due this week.

Kicking things off will be the Bank of Japan (BoJ), set to announce their latest decision in the early hours of Tuesday morning. Policymakers are near-certain to leave all policy instruments on hold, not because the economy doesn't warrant further easing, but due to the fact that their monetary policy toolkit is almost completely depleted after years of ultra-low rates, QE and yield curve control.

On Wednesday, it's the turn of the Bank of Canada (BoC) to make their latest rate announcement, which should see the BoC maintain the highest DM policy rate, leaving rates at 1.75%. However, the BoC may strike a more cautious tone than at the December policy meeting, particularly given recent signs of softness in the labour market.

This week's Norges Bank meeting, on Thursday morning, is also likely to be a non-event, set to see rates left unchanged at 1.50%.

Rounding off this week's G10 policy decisions will be the European Central Bank (ECB), who announce on Thursday. Policymakers, who now appear much more united than towards the end of 2019, are also likely to leave policy unchanged; maintaining the main refinancing rate at 0.0%, and the deposit rate at -0.5%.

However, it will be any comments on the ECB's upcoming strategy review that provoke the most interest in financial markets, particularly any references to new monetary policy tools, or the addition of symmetry to the inflation aim.

Meanwhile, sticking with monetary policy, it will be a key week for the Bank of England (BoE) policy outlook.

It is the latter that is set to be of greater importance for the outlook, with the surveys having been taken solely after the election. As a result, investors - and I - will be looking to see whether the surveys point to any significant post-election bounce in UK economic activity.

If they don't, it would appear that a January BoE cut is a near done-deal.