The latest market highlights and our views on the key developments as sterling jumps on signs of improving business optimism; the loonie struggles after a dovish BoC decision; and the ECB's first policy decision of the year is in focus today

A lesser-known economic indicator which I - and most others - generally pay little attention to sparked a significant rally in the pound on Wednesday; proving just how data-driven the quid is at present - what a nice change from the days of political drama.

Of course, the primary reason behind the sentiment gauge's sudden jump, from a previous reading of -44, is due to the large degree of uncertainty that has been removed since December's decisive election result.

The survey, is the third sentiment gauge - after the Deloitte CFO survey and a ZEW sentiment reading - to show a post-election bounce in the UK economy, though question marks remain over whether elevated sentiment will translate into higher levels of economic output. Friday's crucial PMI surveys will likely provide some clarity on this, with high expectations for the releases to also show a bounce in the economy.

Nonetheless, the seemingly healthy sentiment leaves investors grappling with the BoE's January policy decision. Having sat as high as 70% at the start of the week, markets now view the decision as something of a coin-flip, now pricing a roughly 48% chance of the BoE announcing a 25bps cut next Thursday, as the below shows.

Taking the recent surveys into account, and barring a cataclysmic PMI figure on Friday, I believe that the BoE will stand pat this month; though external MPC member Vlieghe is likely to join the dovish dissenters.

In line with the lower chances of a BoE rate cut, sterling rallied. The pound ended the day 0.65% higher against the dollar, chalking up a third straight daily gain to trade at a 2-week high above the $1.3150 handle. In fact, cable's advance marked the pound's biggest 1-day gain since 6th January.

Bank of Canada - A Dovish Surprise

The BoC, as expected, maintained interest rates at 1.75%, though policymakers struck a noticeably more dovish tone than at the previous policy decision.

Not only did the BoC state that the Canadian economy is no longer operating close to capacity, policymakers removed their previous description of the policy rate being 'appropriate', raising the chances of the BoC providing near-term policy stimulus.

It is clear from the statement that the BoC now sits in data-dependent mode, with particular focus likely to fall on whether the recent slowdown is more persistent than in the BoC's forecasts, and whether consumer spending can continue to underpin the Canadian expansion.

Taking into account the dovish commentary, markets now price a 27.5% chance of a rate cut as soon as the next meeting in March, up from around 6% yesterday.

The BoC's dovish tone pressured the loonie, with the currency ending the day 0.6% lower, trading close to its weakest levels in a month against the dollar.

Barring the pound and the loonie, G10 FX was relatively quiet yesterday. Here's how the majors ended the day: 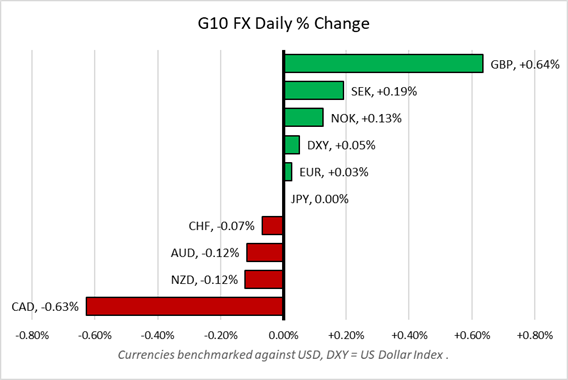 All eyes will be on Frankfurt this lunchtime, for the first ECB policy decision of the year.

Policy settings are, however, all set to remain unchanged meaning the refinancing rate will remain at 0.0%; the deposit rate at -0.5%; and the ECB will pledge to continue their 'open-ended' QE programme at a pace of 20bln EUR per month.

Forward guidance should also remain unchanged, with interest rates set to remain at their present, or lower, levels until inflation robustly converges towards the close to, but below, 2% target.

On the economic outlook, President Lagarde may begin to sound a little more upbeat than previously, with minutes from the December meeting showing policymakers seeing a modest rise in core inflationary pressures; along with comments that the ongoing manufacturing slump may bottom before spilling-over into the wider economy.

It is, however, the announcement of the ECB's strategy review - the first since 2003 - that will be of significantly more interest than the policy decision.

The review, which will likely last until roughly the end of the year,  appears set to centre around three pillars - the 3 'Ts';

Despite the interesting questions that the strategy review is set to raise, today's policy decision should be a non-event for the euro, with President Lagarde highly unlikely to rock the boat with any overly hawkish or dovish comments.

Across the pond, a couple of notable releases are due.

Initial jobless claims are expected to have increased by 215,000 last week; broadly in line with the 4-week average of 216,000.

Meanwhile, the Kansas Fed's regional manufacturing index is expected to tick up modestly to -6, from -7 last month, however any signs of a more significant uptick in the index will be a welcome sign to the ailing US manufacturing sector.

Overnight, there will be plenty for traders to chew over in the Asian session, particularly when it comes to inflation; with CPI due from Japan and New Zealand.

From the land of the rising sun, the pace of price increases is set to remain benign, with headline inflation expected at just 0.4% YoY in December. Things are no rosier when looking at the core inflation measure, which is expected to have risen by just 0.8% YoY; showing that the BoJ have a mountain to climb to get anywhere near their inflation goal.

Meanwhile, from New Zealand, CPI is expected to have firmed in the fourth quarter of 2019; with inflation expected at 1.8% YoY. The relatively solid pace of price increases, and uptick on Q3's sluggish 1.5% print, should reassure the RBNZ that last year's rate cuts are having the desired effect, and should see policy remain on hold over the medium-term.

Finally, minutes from the December Bank of Japan meeting are due overnight, though shouldn't be a significant market mover, being somewhat out of date.