The latest market highlights and our views on the key developments as a busy week gets off to a quiet start; sterling's attention shifts to the YouGov MRP poll; while UK GDP and ZEW sentiment surveys highlight today's calendar.

What's set to be a busy week for markets - including a looming tariff deadline, the general election, and a host of monetary policy decisions - began in a rather uninspiring manner on Monday, with the majority of G10 FX remaining well-confined to recent trading ranges.

The pound was the day's major mover, adding around 0.2% against both the dollar and euro as investors continue to price in a Conservative majority as the most likely outcome of Thursday's poll.

Sterling rallied to a fresh 8-month high against the dollar, just short of the $1.32 handle, with the pound stalling at the 50% fibonacci retracement of the May 18 - Sept 19 decline. However, technically speaking, sterling now trades above both its 200-day moving average (yellow line on the below chart) and its 200-week moving average (not shown below) at $1.3085. Both of these will prove key support levels should the pound reverse course.

Against the euro, sterling performed similarly, adding just over 0.2%, taking the pound above €1.19 for the first time in two-and-a-half years. Monday's gains saw the pound chalk up its 5th straight daily advance, the best run since mid-October.

Barring the pound, other G10 pairings were subdued on Monday, with a lack of Sino-US trade headlines or major economic releases to drive volatility. The only notable releases were:

Today's economic calendar is busier than Monday's, while market participants will also be on alert for any trade headlines, as well as keeping an eye on the final couple of days of election campaigning.

Beginning with the election, the direction of the pound remains almost wholly dependent on sentiment towards Thursday's poll; with investors continuing to believe a Tory majority is the most likely outcome.

With this in mind, significant attention will be paid to this evening's second, and final, YouGov MRP poll of the campaign. The MRP (multi-level regression and post-stratification) model is a sort of 'super-poll', with a much greater sample size than a traditional poll, which attempts to predict the election result on a seat-by-seat basis.

When the poll was last released a couple of weeks ago, YouGov pointed to a 68 seat Conservative majority. The Tories' lead is likely to have narrowed since then, however sterling should remain well-supported if the model shows a Tory majority as the most likely outcome. Should the poll point to a hung Parliament, sterling will likely come under pressure.

However, as with all polls, it is important not to place too much emphasis on any single model - despite the MRP model correctly predicting the 2017 election - with the election result only becoming clear in the early hours of Friday morning.

Sticking with the UK, investors will get their latest read on economic growth this morning.

On a rolling 3-month basis, which attempts to estimate quarterly growth, the economy is set to have stagnated, providing further evidence of the UK's relatively weak economic momentum. 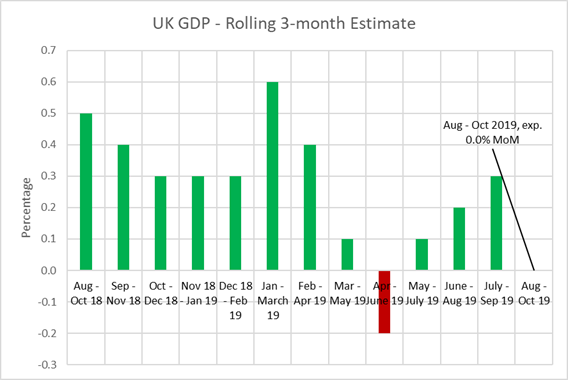 For the pound, the release is unlikely to have any major, immediate impact, with focus remaining on political developments. However, a continuation of the present sluggish pace of growth into next year raises the prospect of an increasingly dovish BoE, putting rate cuts on the table and potentially pressuring sterling.

Across the Channel, today's other notable releases come in the form of December's ZEW sentiment surveys.

The reports, which are a useful leading indicator of economic conditions in the eurozone, are set to paint a bit of a mixed picture. In Germany, the sentiment index may have bottomed out, with expectations for the highest print since April, with the indicator set to rise to 0.0, above last month's -2.1. 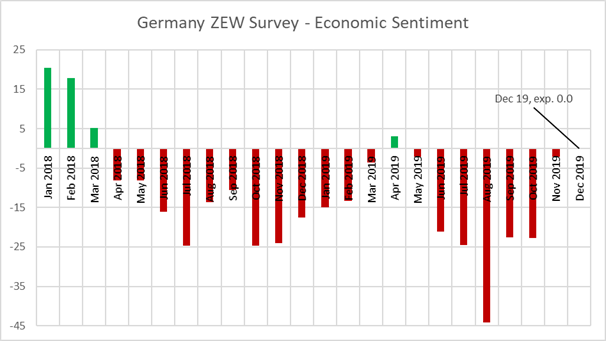 However, for the eurozone as a whole, sentiment is expected to have dipped back further into negative territory, at -17.7. Such a reading would evidence the challenge facing ECB President Lagarde at this Thursday's policy meeting; with the common currency bloc continuing to battle with fragile economic momentum, even if the engine room - Germany - is in the tentative, early stages of a recovery.