The latest market highlights and our views on the key developments as the Tories win a majority, the ECB keep policy on hold, and US retail sales come into focus today.

What a day. Not only did we have the general election, there was also the latest ECB meeting and the signing (at last!) of a phase one Sino-US trade deal.

Firstly, we must begin with the election, which has resulted in a landslide for the Conservatives, with the majority likely to be in the high 70s once all ballots have been counted.

Such a significant majority, which would be the biggest Tory majority since Thatcher in '87, is much larger than almost all observers had expected, and significantly greater than the market had priced in, showing that Boris Johnson's election gamble has paid off.

Here's a graphical breakdown of the result; 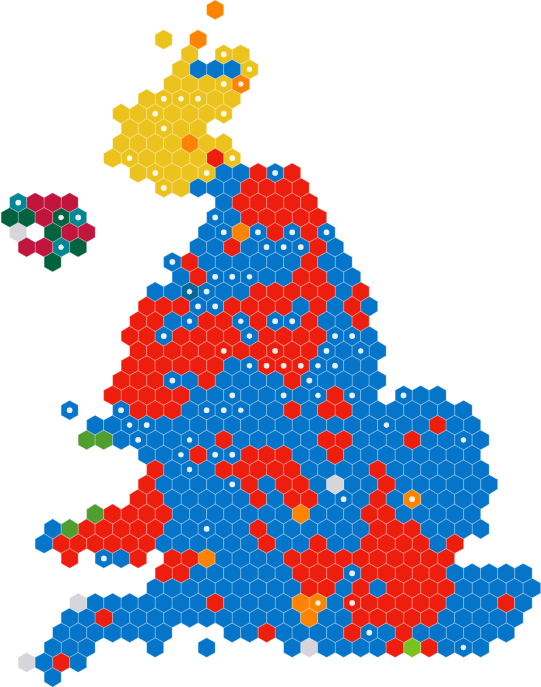 The exit poll causing sterling's move projected a Tory majority of 86, slightly over-estimating the eventual result. Nonetheless, the significant Tory majority that has been won overnight is the most market-positive outcome for three reasons.

Firstly, markets now have some certainty that a smooth Brexit will take place, with a vote set to be held on the Withdrawal Agreement next week. Secondly, PM Johnson now no longer has to rely on any one wing of his party, meaning that the hard-line Eurosceptic ERG can be neutralised, likely resulting in an extension to the Brexit transition period. Thirdly, the 'Corbyn risk' has now been priced out, with the Labour leader announcing that he will not fight another campaign as leader.

Corbyn's leadership was not the only casualty of the ballot. Lib Dem leader Jo Swinson lost her Scottish seat to the SNP, while veteran Labour MP Dennis Skinner lost his Bolsover seat after 49 years as an MP and the DUP's Westminster leader Nigel Dodds lost his Belfast North seat.

So, that's where we stand this morning (at the time of writing, approx. 6am). More on where we head next is in the section below.

Stepping away from the UK for a moment, we finally have a phase one Sino-US trade deal!

After months, perhaps years, of talks between the two superpowers, President Trump signed off on a trade agreement yesterday, which will avert the planned imposition of additional tariffs on Sunday.

The agreement gave risk appetite a shot in the arm, pushing US equity markets to fresh all-time highs, with the S&P 500 gaining 0.85%.

The improving risk appetite was also in evidence in FX markets, with the Aussie dollar adding 0.75%, and the Kiwi dollar gaining 0.6%. Conversely, the safe-haven yen struggled, shedding 0.8%, with the Swiss franc also struggling.

However, two notes of caution. Firstly, nobody is aware of the contents of the deal, and secondly, China still have to agree to the contents -- something which is not a foregone conclusion.

Finally, Thursday also saw Christine Lagarde take the helm of her first meeting as ECB President. The policy decision itself was a non-event, with rates remaining unchanged, and the ECB continuing to pledge to purchase 20bln EUR per month of bonds under their asset purchase programme.

The policy statement was also unchanged from Draghi's final meeting, the only difference being a new date at the top!

Nonetheless, Lagarde's press conference did see some interesting, and some perplexing remarks. Lagarde seemed to strike more of an upbeat tone on the eurozone economy, noting 'some signs of economic stabilisation', which resulted in a brief pop higher in the euro. This was, however, short-lived, with other comments hinting at Lagarde's dovish stance -- namely that the central bank 'stands ready to adjust all of its instruments' and a continued push for fiscal stimulus.

On the perplexing side of things, rather than sticking to the usual hawk-dove spectrum used to classify central bankers, Lagarde stated that she wanted to be an owl. No, me neither.

With the election result now clear, focus will quickly turn to the next steps for the UK, and each of the major parties.

For the UK, PM Johnson will begin to shape his government, though there are unlikely to be any major cabinet changes until after Brexit has taken place. Speaking of Brexit, the Tories are reportedly planning to hold a 2nd reading vote on the Withdrawal Agreement Bill, the legislation to implement Brexit, next Friday 20th December. Looking ahead, the UK will -- barring some strange twist of fate -- be leaving the EU on 31st January 2020.

Meanwhile, both Labour leader Jeremy Corbyn and Lib Dem leader Jo Swinson are shortly expected to resign, with leadership elections likely to take place in the near future. In Scotland, the SNP -- having taken around 50 of the 59 seats -- will likely renew their push for a 2nd independence referendum, probably increasing friction between Edinburgh and Westminster, with PM Johnson unlikely to allow such a plebiscite.

The all-important control group measure -- which feeds into GDP data -- is also expected to increase at a healthy clip, expected at 0.3% MoM. Such a report will likely help the dollar, with a healthy pace of consumer spending continuing to underpin the present US economic expansion.

Looking ahead to next week, the final trading week before the Christmas period contains a couple of notable central bank decisions. The Bank of Japan (BoJ) and Bank of England (BoE) are both likely to keep policy on hold, though any hints on the policy outlook will be keenly watched. Also, from the BoJ, any comments on the recently announced fiscal stimulus plan.

On the data front, CPI inflation figures from the UK, Eurozone, Canada and Japan will be in focus, as well as the latest round of flash PMI surveys which will be closely watched for any signs of an ongoing economic slowdown.