The latest market highlights and our views on the key developments as sterling crumbles to its lowest levels since the '80s; the 'flight to cash' continues; and COVID-19 policy responses will remain in focus today

It was a day of seismic, absolutely seismic, shifts across asset classes on Wednesday, with the kind of moves usually seen over days or even months in evidence in just one day. The significantly elevated volatility - now a running theme in markets - came as investors continued to monitor the coronavirus pandemic and its rapid spread across the globe. Confirmed cases of the virus now number in excess of 200,000, while Europe has now reported more total infections than China.

Governments worldwide continue to respond to the fast-moving virus, with a host of new measures announced yesterday, including:

Meanwhile, for markets, the broad picture was a relatively simple one - sell everything, and buy the dollar; as the recent 'flight to cash' continued with the coronavirus pandemic seeing investors continue to liquidate their positions.

We must start with G10 FX, and particularly with the pound, which crumbled to its lowest levels since 1985 (not a typo) yesterday; falling as much as 6 big figures to 1.1450 - the lowest level that I've witnessed in my lifetime.

Some of the price action seen in cable (GBP/USD) yesterday was phenomenal, with the pairing taking a relentless pummeling throughout the day, before falling more than 100 pips in a little over a minute just before the Prime Minister's speech.

Such a significant move - the pound's biggest one-day decline since the Brexit vote, and the second biggest one-day fall in the last 20 years - takes us well into uncharted territory, meaning that locating support points becomes incredibly difficult. Potential longer-term trend support in the 1.12 region may, however, be worth watching.

The perplexing thing about the pound's sell-off, which was also in evidence against the euro where sterling lost more than 3%, is that there was no one catalyst behind the move.

Instead, one must put the tumble down to a combination of factors including, but not limited to: the ongoing dollar funding squeeze; speculation that the BoE will look to ease policy further; a drying up of inflows to counter the UK's current account deficit; unconfirmed rumours that London may be placed under lockdown; and the UK appearing to be somewhat 'behind the curve' of virus infections compared to other European nations.

Nonetheless, we must trade what appears in front of us, and what appeared on Wednesday was a bloodbath for the pound.

As mentioned above, the dollar funding squeeze continues, as shown by the LIBOR-OIS spread (explained in Monday's Note) blowing out to its highest level since 2009, indicating a severe shortage of dollar liquidity in the market.

As such, and as a result of a scramble into the perceived safety of cash dollars, the greenback once again saw significant demand yesterday, adding nearly 2% against a basket of peers. This gain pushed the dollar index above both the 100 and 101 handles, rising to its highest levels in 3 years.

The dollar's relentless advance saw all other G10s fall by the wayside, taking out some key levels in the process.

Down under, the Aussie dollar slid - not helped by the deteriorating risk environment - losing more than 4% on the day, the currency's biggest one-day decline since the financial crisis, printing fresh 17-year lows in the process.

The Kiwi dollar fared little better, shedding around 3% for its worst day since 2011, tumbling to 11-year lows.

Meanwhile, the Canadian dollar lost more than 2%, facing headwinds as oil prices tumbled, rising above $1.45 for the first time in four years.

In other asset classes, the 'flight to cash' was also in evidence, as investors chose en masse to liquidate their holdings and ride out the coronavirus storm in the relative safety of cash. The old mantra of having no position is a position in itself rings true once again.

The rotation into cash was most evident in equity markets, where both European and US indices were a sea of red.

In Europe, all bourses ended the day in negative territory, as the pan-continental Stoxx 600 lost 4.3%. 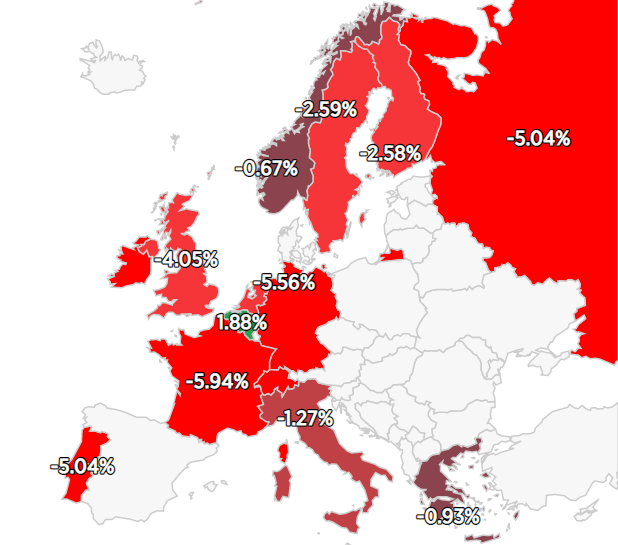 Across the pond, US equities also closed in the red, with the benchmark S&P 500 losing more than 5% on the day. As now appears to be a daily occurrence, trading was temporarily halted for 15 minutes after a more than 7% fall in the S&P, before the index pared losses after trading restarted.

On a sector-specific level, all major components of the index ended the day in negative territory, with only a handful of stocks closing in the green. 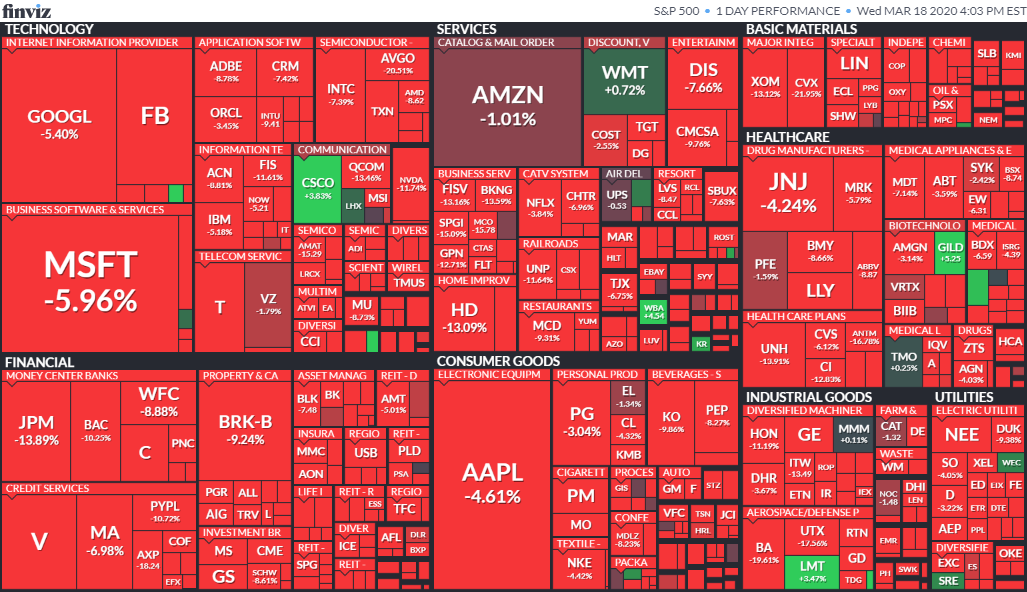 Meanwhile, in the bond market, the Treasury curve continued to bear steepen, with the 2s10s spread exploding to a whopping 70bps, its widest level in over two years.

The bear steepening, which is traditionally the final stage of the yield curve seen before the economy enters a recession, came as yields at the long end of the curve surged - due to the rotation into cash, and as a result of expected greater issuance in the coming months to fund the extensive coronavirus stimulus plans.

Benchmark 10-year yields rose by 19bps yesterday, marking a whopping rise of more than 50bps over the last two days. The short end of the curve, however, remains anchored by the Fed's recent 100bps rate cut, with 2-year yields ending the day unchanged.

Turning to commodities, oil prices cratered on Wednesday as the market continues to battle with non-existent demand as a result of the coronavirus pandemic, and the mounting threat of oversupply as the Saudi Arabia-Russia price war continues.

US WTI crude settled at its lowest level since 2003, down 18.1% on the day; while global benchmark Brent tumbled 9.9%, briefly dipping below the $25bbl mark.

Finally, the 'flight to cash' mentioned earlier saw gold prices decline, with the precious metal losing around 3% on the day.