The latest market highlights and our views on the key developments as Thursday's data shows the US economy remaining firm; the latest ECB minutes strike a surprisingly upbeat tone; and today's UK retail sales may give the BoE's doves more food for thought

US Economy - Steady As She Goes

The US economy continues to perform solidly, with all three of Thursday's notable economic releases beating expectations.

Let's begin with the most important release, December's retail sales report. Headline sales increased by 0.3% MoM as 2019 drew to a close, the third straight monthly increase in the headline measure, and in line with forecasts.

It was, however, the details of the report that outperformed. Sales excluding autos rose by their fastest pace since July, increasing at 0.7% MoM; while the control group measure - the basket of goods which feeds directly into the GDP report - increased by 0.5% MoM. 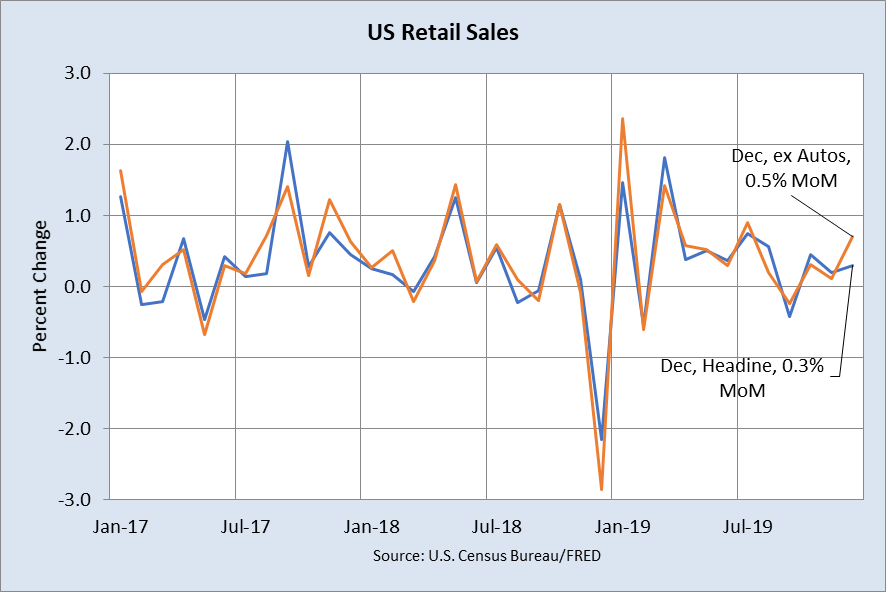 In fact, an increase in sales was recorded in 12 of the 13 areas that the report covers, with only sales of motor vehicles declining last month.

The solid release should see the US consumer continue to underpin the present economic expansion, and confirms that the economy is set to continue ticking over nicely. The consumer does, however, continue having to shoulder the burden of propelling the economy forward, bearing in mind the ongoing slowdown in the manufacturing sector.

However, there may be some tentative signs that the ongoing manufacturing slump may be coming to an end. January's manufacturing index from the Philadelphia Fed showed output in the district rising at its fastest pace since May, with the index rising to 17.0. Should other regional Fed surveys follow suit, this would bode well for next month's ISM report and the production sector in general. 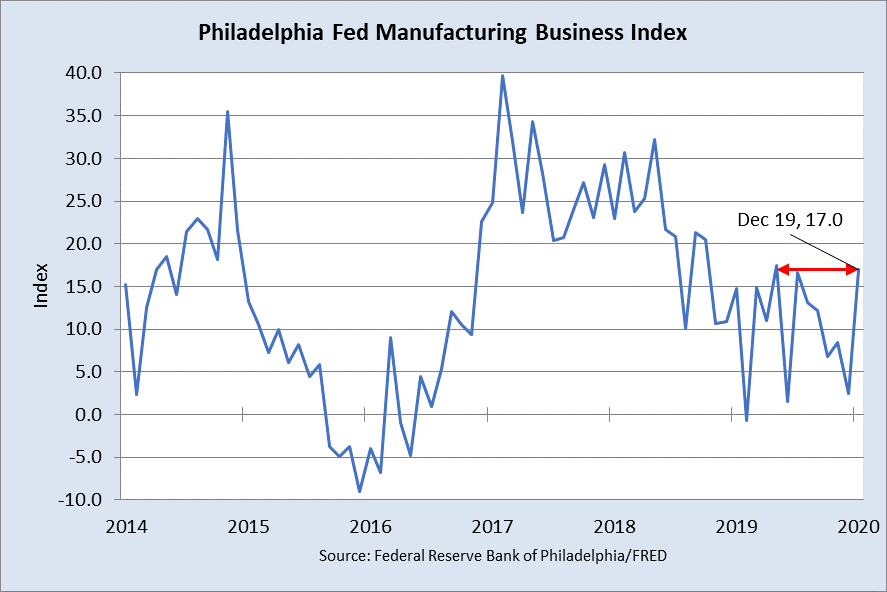 Meanwhile, the US labour market also remains healthy. Data released on Thursday showed initial jobless claims falling for a 5th consecutive week in the seven days to 10th January, with 204,000 claims recorded. This was the lowest weekly jobless claims print since late-November. 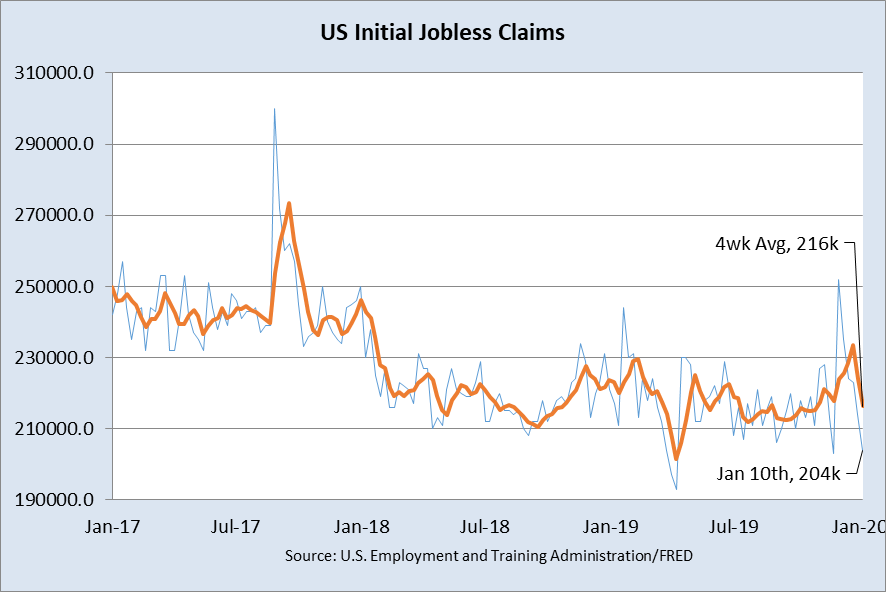 The ongoing fall in claims, combined with a solid payrolls number last week, low unemployment and decent earnings growth, should all continue to provide solid support to personal consumption.

Turning to the dollar where, despite the solid releases, the reaction was relatively muted, with the greenback chalking up a gain of just 0.1% against a basket of peers.

The lack of significant market reaction stems from the fact that, with the economy continuing to perform well, the FOMC are set to leave monetary policy on hold, therefore giving investors little reason to re-assess the interest rate outlook.

In other asset classes, Treasury yields increased by around 2bps at the long end of the curve, while US equities rallied. All three of the major indices closed at new all-time highs; the S&P 500 was up 0.84%, the Dow Jones Industrial Average gained 1.06%, and the Nasdaq added 1.06%.

Meanwhile, in Europe, minutes from the December European Central Bank (ECB) policy meeting struck a surprisingly upbeat tone, and appeared to show little in the way of divisions among members of the Governing Council.

The minutes re-affirmed policymakers' view that risks to the economy remain tilted to the downside, and reiterated the ECB's desire for governments to enact fiscal stimulus where they have the ability to do so.

However, it was the more detailed comments on the economic outlook that resulted in some brief euro strength. Policymakers noted that, despite data remaining weak, recent reports pointed to "stabilising growth dynamics", while indicating that the "industry slump may bottom out before creating spill-over" effects.

These comments indicate that policymakers believe the worst of the bloc's ongoing economic woes are behind it, and that the coming months are likely to see slow - rather than no - economic growth.

Nonetheless, this does nothing to change the policy outlook, with the present ultra-loose stance and 'open-ended' QE programme set to continue for the foreseeable future as the ECB attempt to return inflation to their 2% goal.

As mentioned above, the upbeat comments resulted in a brief spell of euro strength, however the common currency ended the day 0.2% lower, encountering headwinds after the aforementioned strong US economic data.

Another piece in the jigsaw ahead of the Bank of England's policy decision is set to be filled in today, with December's retail sales report due this morning.

At the headline level, sales over the crucial festive period are expected to have increased by 0.7% MoM, bouncing back from 4 straight months of declines. 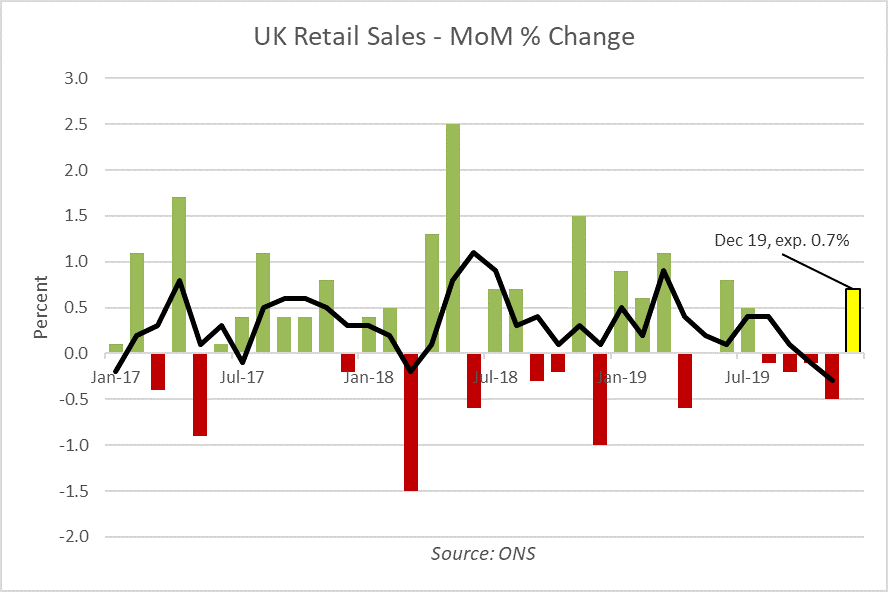 Excluding fuel, sales are expected to have increased by 0.5% MoM, with estimates for both sales measures pointing to the highest jump since last June. 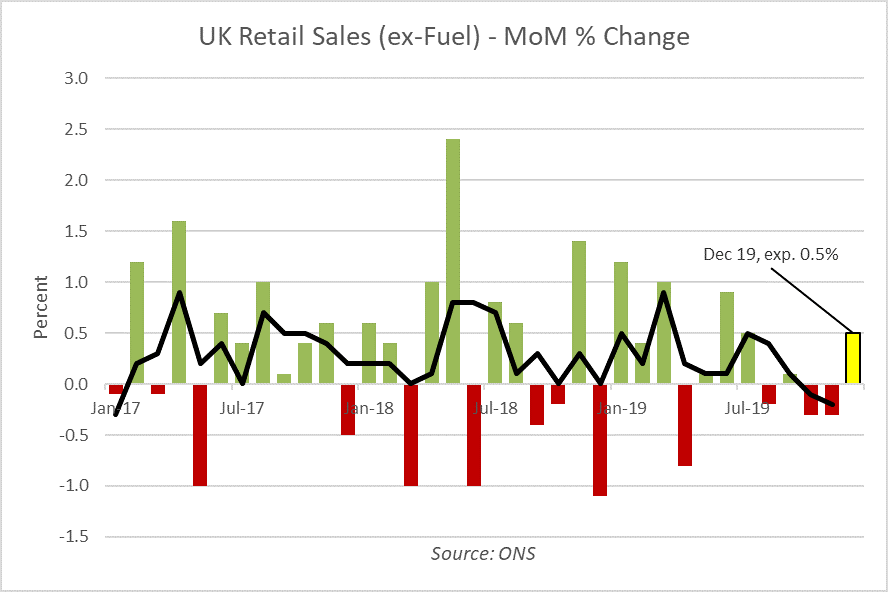 This morning's release will be key for markets' assessment of the January BoE policy decision, with a rate cut remaining a roughly 60% chance. Should sales come in softer than expected, market participants would likely ramp up their bets on a rate cut at the end of the month, thus resulting in a stiff headwind to the pound.

A Busy US Data Slate

Across the pond, today sees another busy slate of US economic releases.

Highlighting the calendar is January's preliminary consumer sentiment report from the University of Michigan, expected to show sentiment remaining healthy, with the index set to print 99.3.

This solid level of consumer sentiment should see spending remain firm in the coming months, thus supporting the ongoing US expansion.

Meanwhile, today also sees the release of December's building permits, housing starts, and industrial production reports; all set to provide further colour on the health of the US economy - particularly the production sector.

November's JOLTS job openings report is also due today, however the figures are rather out of date, and, with the labour market in good nick, should receive little attention.

Today's final notable release comes from the eurozone, with final inflation figures for December due this morning.

No revisions are expected from the flash estimate released earlier, therefore both headline and core CPI are both expected to have increased by 1.3% YoY last month.

While this uptick in inflation is a promising sign for the ECB, the gain is largely due to temporary factors, and, with no sustained uptrend in inflation likely any time soon, policymakers still have their work cut out to hit their price target.

Looking ahead to next week, the first G10 central bank decisions of the year (and the decade) are due.

The Bank of Japan (BoJ), Bank of Canada (BoC) and European Central Bank (ECB) are all set to announce their latest policy decisions, though no policy alterations are expected. The BoJ are simply unable to alter policy further, with their toolkit largely empty; while the BoC are likely to stand pat, though may take on a more cautious stance.

It will likely be the ECB's decision that generates the most interest, with investors set to gain some clarity on the upcoming strategy review, which will possibly include a revision to the ECB's price target.

Sticking with monetary policy, next week will be a key one for the Bank of England's policy outlook, with the latest labour market figures and January's flash PMI surveys both due. The latter is likely of greater importance, with the full dataset having been recorded after the election. If there are scant signs of a post-election bounce in the UK economy, that may cement the case for a BoE cut this month.

Elsewhere, the latest inflation figures are due from Canada, Japan and New Zealand, while markets will also get a read on last month's Australian labour market conditions, as well as paying close attention to January's flash eurozone PMIs.

Finally, the annual World Economic Forum kicks off in Davos next week - my invite must still be in the post.