The latest market highlights and our views on the key developments as risk assets extend gains with sentiment holding firm; the euro sinks to a 33-month low after dismal data; and US CPI figures come into view today

The recent risk rally continued on Wednesday, with sentiment buoyed by ever-receding concerns over the coronavirus outbreak.

As mentioned yesterday, markets continue to believe that the impact of the outbreak will be short-lived, pricing in a 'V' shaped recovery in the Chinese economy, and predicting little collateral damage to the broader global economy.

Furthermore, sentiment was boosted by some encouraging signs that the outbreak may have peaked, with the daily rate of change in the number of confirmed cases continuing to slide, to around 4.8%. 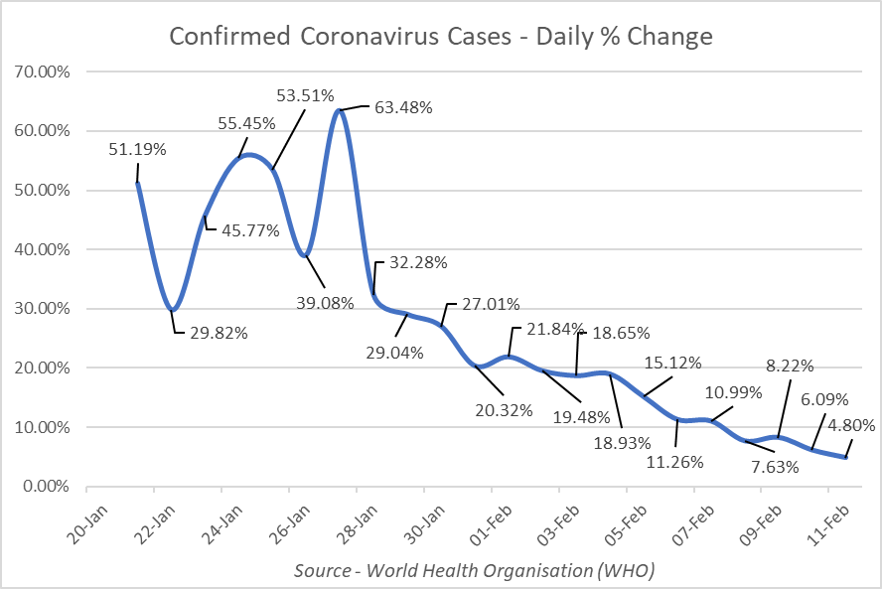 As a result, in G10 FX, both antipodeans - which typically trade as risk proxies - gained ground. The Aussie dollar ended the day just shy of 0.5% higher, hitting a 1-week high against its US counterpart. The Kiwi dollar, meanwhile, added more than 1%, benefitting from the risk-on tone and a less dovish than expected RBNZ decision.

Conversely, the safe-havens of the Japanese yen and Swiss franc continued to face headwinds, with both dipping by around 0.25%. The dollar, however, gained ground, adding 0.15% against a basket of peers. 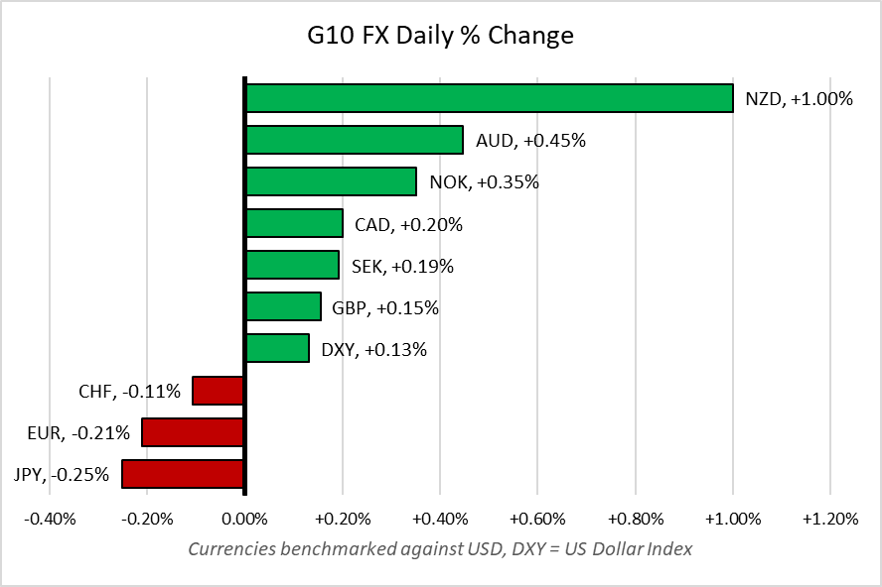 Away from FX, European equity markets ended the day with solid gains; the pan-continental Stoxx 600 closing 0.6% higher at a record high. In the US, it was another day of all-time highs, with all three major indices closing at records. The benchmark S&P 500 was 0.65% higher, while the tech-heavy Nasdaq and the Dow Jones Industrial Average both added just shy of 1%.

In the bond market, Treasury yields climbed for a second straight day, with haven demand dampened by the increasingly risk-on feel. 10-year Treasury yields rose by 4bps, with similar increases seen across the curve.

Meanwhile, oil prices jumped, assisted by the improvement in sentiment and increasing expectations that Russia may come around to supporting deeper OPEC production cuts. Global benchmark Brent settled 3.3% higher, while US WTI crude added just shy of 2.5%, both blends recording their biggest 1-day gains in a month.

As mentioned above, the Kiwi dollar staged an impressive rally on Wednesday, chalking up a daily gain of more than 1%, the biggest one-day advance since December.

Said gains came after the RBNZ left policy on hold in the early hours of yesterday morning, and indicated that further policy easing is unlikely, unless the ongoing coronavirus outbreak has a significant spill-over effect on the New Zealand economy. 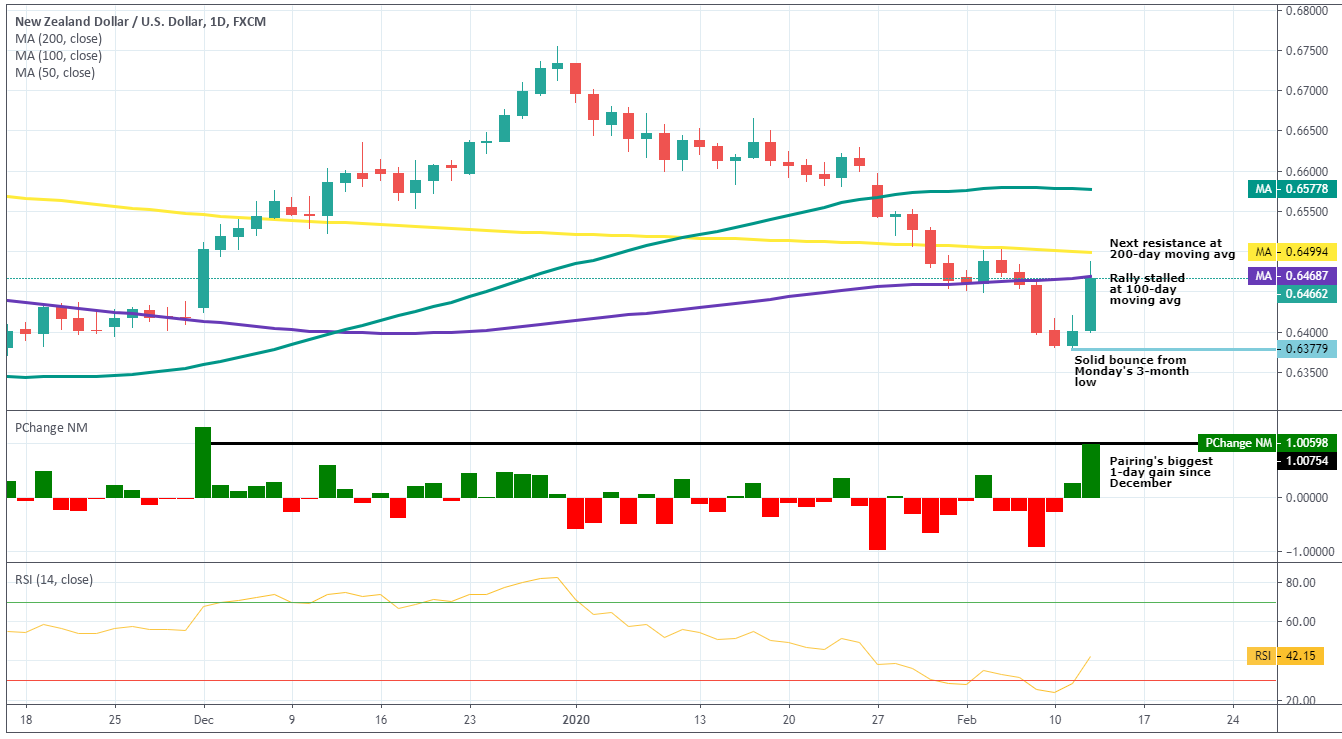 Looking technically, the Kiwi dollar's rally has seen the currency extend the recent solid bounce, rebounding strongly from a 3-month low seen earlier in the week.

The NZD's Wednesday advance appeared to stall at the 100-day moving average, with the pairing failing to close above that marker.

To the upside, the 200-day moving average comes in at the psychological resistance of 0.6500, which may be a difficult handle to break through.

Turning to yesterday's data, the highlight came from the eurozone, in the form of December's industrial production report.

The decline throws into doubt expectations that the bloc's industry slump has come to an end, particularly taking into account the distinct possibility that the slowdown could deepen given the recent decline in Chinese demand.

The dismal data, combined with a stronger dollar, and the increased pricing of political risk stemming from Germany, all exerted pressure on the common currency, which ended the day with losses of 0.2%.

These losses saw the common currency dip below the lows seen last October, resulting in EUR/USD briefly hitting a 33-month low of $1.0865.

Perhaps the sleeping giant of G10 FX has finally been awakened.

Today's data highlight comes from the US, with this afternoon's release of January's inflation figures.

Headline CPI is expected to have increased by 2.4% YoY last month, with such a pace representing the fastest pace of price increases since October 2018. The core CPI measure, however, which excludes food and energy prices, is set to have pulled back to a 6-month low, with expectations for a print of 2.2% YoY. 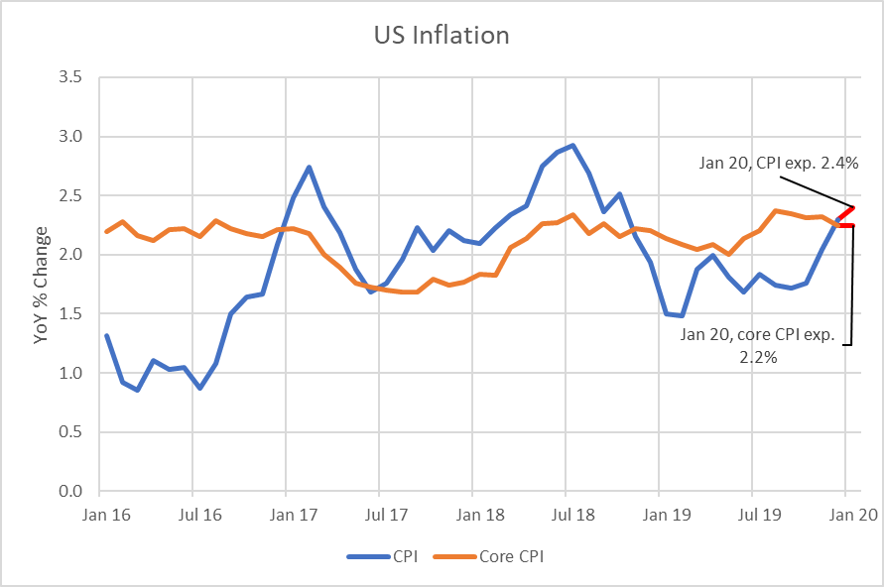 Despite the expected uptick in headline inflation, the pullback in core inflation evidences the continued absence of significant inflationary pressures in the US economy, meaning that today's figures should have little -- if any -- impact on the monetary policy outlook. Furthermore, the FOMC have repeatedly stated their preparedness to allow inflation to run 'hot' (i.e above target), hence will not be too concerned by today's figures.

As a result, the impact on the dollar and other US assets should be relatively limited, though markets continue to price in at least one rate cut by year-end, largely as a result of the potential risks posed by the ongoing coronavirus outbreak.

Meanwhile, it's set to be another busy day for central bank watchers, with attention once again centring on the Federal Reserve.

Not only will markets hear from New York Fed President, and FOMC Vice Chair, Williams; but investors will also be eyeing the Senate confirmation hearings for President Trump's latest nominations for the Fed Board -- economist Judy Shelton, and Director of Research at the St Louis Fed Christopher Waller.

While likely leaning dovish, Waller is a relatively conventional pick, who should be confirmed relatively easily. Shelton, however, is a much more controversial choice, being known for advocating a return to the gold standard, calling for a 0% inflation target, and questioning the need for a central bank altogether.

Shelton has also flip-flopped on her monetary policy views. During the Obama administration Shelton criticised the Fed's low-rate, accommodative, policy stance. Since Trump came into office, Shelton has been an advocate of deep interest rate cuts as a form of economic stimulus.

It is, therefore, not difficult to see why Shelton's nomination is so controversial, hence a number of probing questions are to be expected this afternoon.

Elsewhere, plenty of ECB speakers are also in focus, including two sets of remarks from Chief Economist Lane and a couple of speeches from new Executive Board Member Panetta.