The latest market highlights and our views on the key developments as sterling gains ground on solid labour market figures; eurozone economic sentiment jumps but G10s remain rangebound; and the BoC are expected to stand pat today

The UK's labour market remained in decent nick last November, according to data released on Tuesday, modestly dampening market expectations for the BoE to cut rates as soon as next Thursday.

Starting with employment, joblessness remained at 3.8% in the three months to November 2019, equal to a 45-year low. 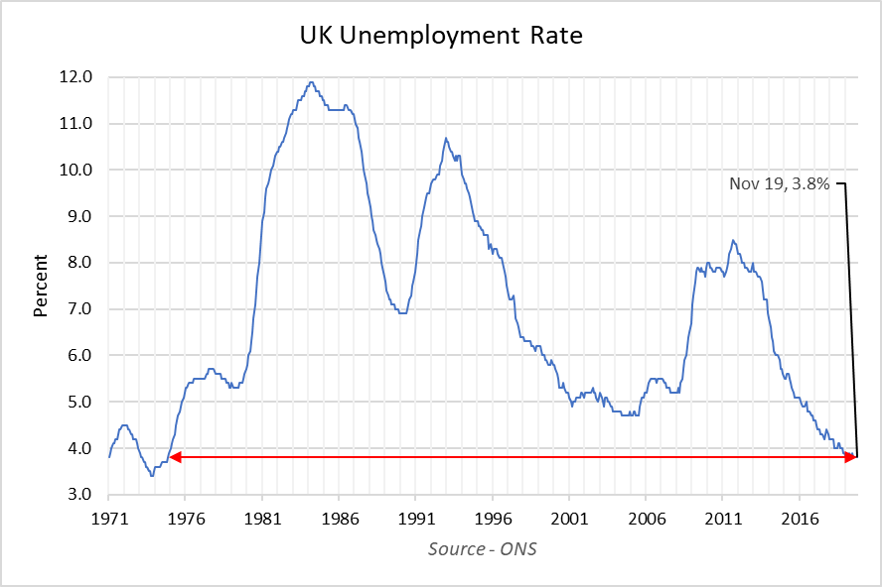 However, it would appear that the UK labour market - while tight - has not yet reached full employment. The employment rate now stands at a fresh all-time high of 76.3%, up 0.5% on the previous three months, boosted by the economy adding 208,000 jobs over the period, representing the largest 3-months jobs gain in 10 months, as the below Reuters chart shows.

However, despite the tight labour market conditions, there has yet to be significant upward pressure on wages; though it is important to note that this is a phenomenon in evidence across developed economies, and not one unique to the UK.

Nonetheless, earnings growth appears to have stabilised. Including bonuses, average weekly earnings increased by a better than expected 3.2% YoY in the three months to November;  while pay excluding bonuses increased at 3.4% YoY, in line with expectations.

Real wage growth, however, continues to increase at a healthy clip, with headline CPI remaining benign after the recent lowering of Ofgem's energy price cap. As such, in this instance, the transitory benign pace of inflation is a benefit for UK workers, and should result in a continued solid pace of consumer spending in the coming months.

The market reaction to the solid, but not blockbuster, labour market report was largely as expected; with the upside surprise not significant enough to see a major repricing in rates markets of the January BoE decision.

Odds on a 25bps cut have come back slightly, to roughly 63% from 70% yesterday, however Friday's post-election January flash PMI surveys are of greater importance for the upcoming MPC decision.

Nonetheless, with the policy decision becoming more of a coin flip in the market's eye, sterling gained ground. The quid caught a bid throughout the day, settling around 0.4% higher against both the dollar and euro, chalking up a second straight day of gains.

Speaking of the euro, the common currency was subdued on Tuesday, despite a couple of better than expected sentiment surveys.

January's sentiment survey from the well-respected ZEW institute showed businesses across the bloc at their second most optimistic level in two years in January, with the index printing 25.6. 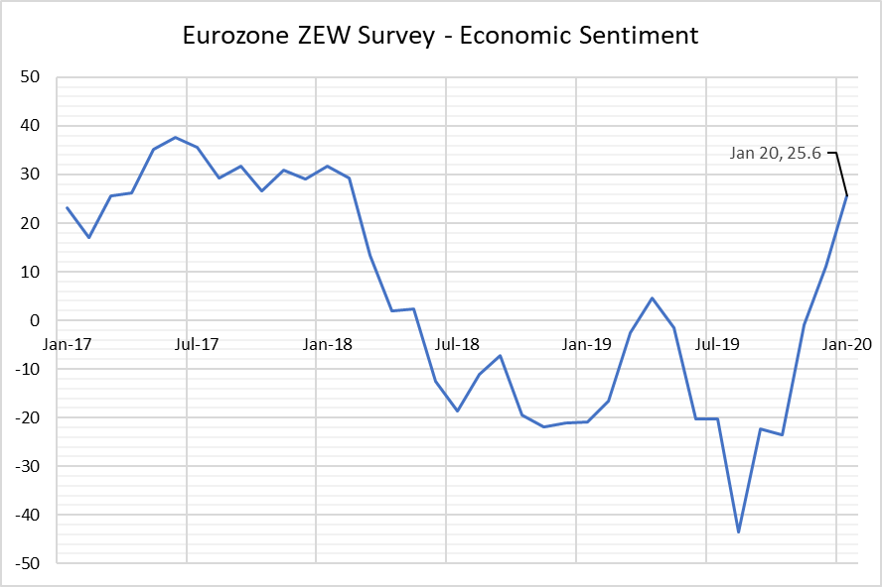 Meanwhile, in Germany - the eurozone's engine room - sentiment hit a near 5-year high at 26.7, with business optimism boosted by the recent signing of the phase one US-China trade deal. 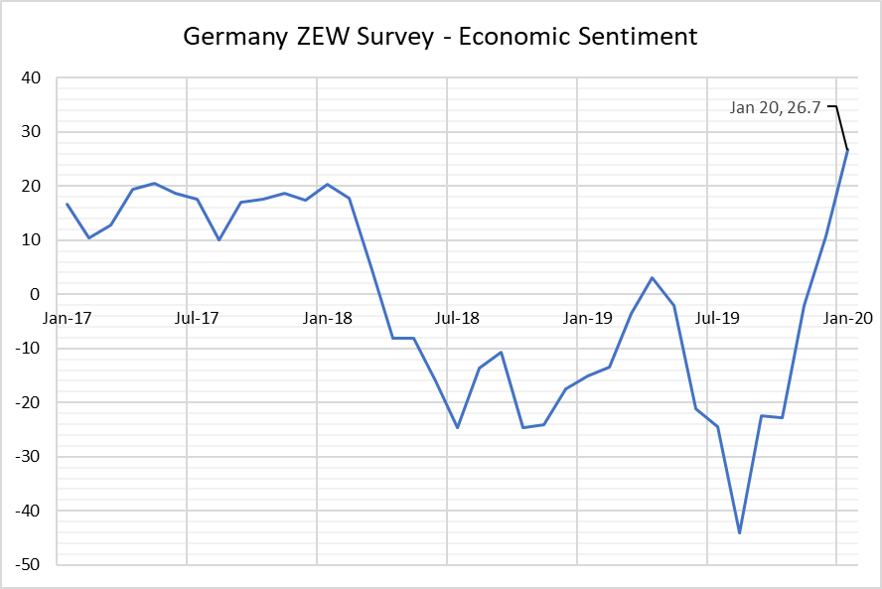 The lack of reaction in the common currency, however, can be largely put down to the fact that, in order for policymakers and investors alike to significantly reassess the economic outlook, the surge in sentiment will need to be followed up by improving 'hard' data; something which will only become apparent over the coming months.

Another Quiet Day for G10 FX

It wasn't just the euro that had a quiet day on Tuesday, with sluggish trading conditions once again gripping G10 FX markets. Risk appetite was, however, a little shaky, with investors somewhat unnerved by the ongoing Coronavirus outbreak in South East Asia, and the possibility of the disease spreading. 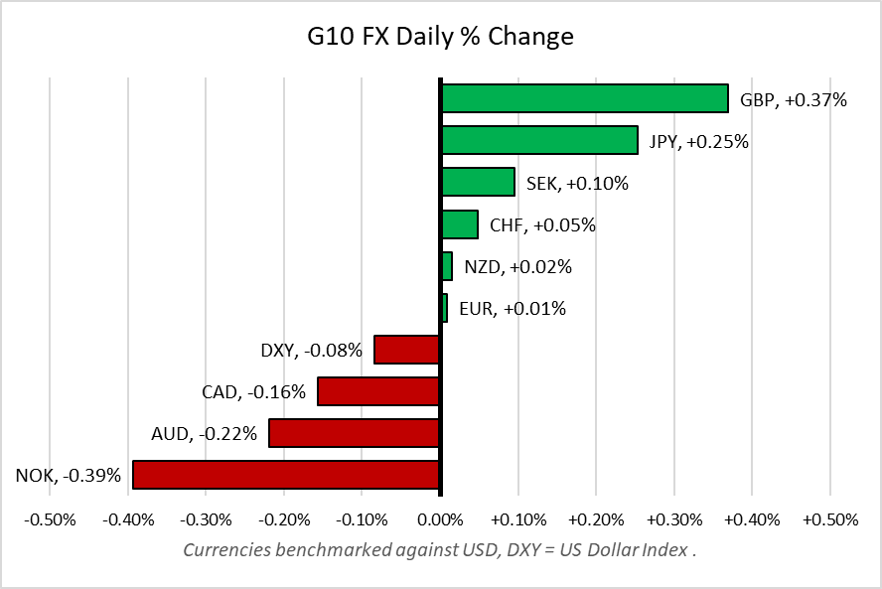 I hope you like Canada, because today is all about the loonie.

Today's main event will be the Bank of Canada's (BoC) latest policy decision, the first of the year.

The BoC are set to leave monetary policy on hold, maintaining interest rates at 1.75% - the highest G10 policy rate.

However, there is the distinct possibility that policymakers will strike a more cautious tone, taking into account the weak fourth quarter experienced by the Canadian economy; as well as signs of significant softening in the labour market.

However, with the fourth quarter weakness seemingly caused largely by geopolitical factors, with trade tensions a major drag, policymaker will be hoping for the Canadian economy to bounce back as 2020 gets underway. This will likely be reflected in the BoC's latest forecasts, released alongside the policy decision.

More broadly, there is no urgency for the BoC to act to add stimulus to the Canadian economy, with policymakers having plenty of policy headroom, and the recent abatement in Sino-US trade tensions giving the BoC the luxury of taking time to assess how the economy develops.

Even if the economy continues to soften and the BoC do decide to take out some insurance, for example with a 25bps rate cut, the impact on the loonie will likely be limited. Such a cut would still leave the CAD as one of the highest yielding G10 currencies, hence the currency can be expected to remain well-supported in any case.

Inflation is expected to have remained relatively close to the BoC's price target as 2019 drew to a close, with headline CPI set to have once again increased at 2.2% YoY, equal to the fastest pace since May 2019.

The core inflation measure, which strips out food and energy prices, is also set to remain close to the BoC's target. Core CPI is expected to have increased by 1.9% for a fifth straight month.

Anything Else To Look Out For?