The latest market highlights and our views on the key developments as sentiment remains firm amid receding Middle East tensions; BoE Gov. Carney strikes a dovish tone; and attention turns to jobs day and the monthly US labour market report

Is the unreliable boyfriend about to strike again?

Bank of England Governor Mark Carney raised the prospects of the Bank cutting rates with a rather dovish sounding set of remarks on Thursday.

Carney indicated that the Bank's economic forecasts cannot be assured, and that the Monetary Policy Committee (MPC) are debating the merits of providing near-term policy stimulus.

It was this latter remark, the most explicit mention to date of a looser policy stance, that pressured the pound and saw markets increase their bets on the BoE cutting rates. However, it should come as little surprise to anyone that the MPC have been debating additional stimulus, with two policymakers - Michael Saunders and Jonathan Haskel - having dissented in favour of an immediate rate cut at the previous two policy meetings.

Nonetheless, the outgoing Governor's comments resulted in the pound striking a softer tone throughout the day, settling around 0.3% lower against the dollar, just above a 2-week low. Against the euro, sterling's losses were contained, with the pound settling unchanged.

Meanwhile, in money markets, a January rate cut - while unlikely - has now doubled in likelihood to 10%, while around 16bps of policy easing is priced in by the end of the year, as the below from Reuters shows.

However, it is important to note how outgoing central bankers tend to shoot from the hip as their terms draw to a close, thus my base case remains that the BoE remain on hold throughout the year.

Also of interest in Carney's remarks were comments that the BoE possesses 250bps worth of policy headroom. This appears incredibly optimistic given that rates are just 75bps above the lower bound. Instead, Carney sees an increase in asset purchases as providing the equivalent of 100bps of easing, and stronger forward guidance providing the equivalent of 75bps of cuts.

Both estimates appear optimistic to say the least, emphasising the key role that fiscal stimulus would have to play in the event of an economic downturn in the UK.

Staying in the UK, and moving just a few miles away from the BoE to the Houses of Parliament, Thursday saw MPs vote in favour of the third reading of the Withdrawal Agreement Bill (WAB) - the legislation which enacts the Brexit deal into UK law -- by 330 votes to 231, a majority of 99.

This is the first time, after three and a half years, that MPs have signalled their full approval for a Brexit deal, and paves the way for a smooth and orderly departure on 31st January.

While the legislation still needs to pass through the Lords, and may be amended, it is likely that Peers will pass the legislation as-is, at which point the Brexit deal will become legally binding.

Sterling was unfazed by the vote, with such an eventuality having been priced in on election night after the Tories 80-seat majority win.

Elsewhere, looking more broadly, risk sentiment remained firm yesterday, as markets continued to react to the de-escalation in Middle East tensions and the reduced threat of further military action between the US and Iran.

As a result, safe havens continued to suffer, seeing the Japanese yen and Swiss franc lose around 0.4% apiece, the former falling to its weakest levels in a fortnight against the dollar. Speaking of the dollar, the buck chalked up its third straight day of gains yesterday, adding 0.2% against a basket of peers.

Other safe havens, away from FX, also suffered, with Treasury yields continuing to push higher, and gold prices pulling back further from the recently hit 7-year high. Oil prices were also softer, as the risk of supply disruption in the Middle East receded. WTI crude ended the day below $60bbl, close to levels seen before the recent attacks, while global benchmark Brent also struggled.

In contrast, equity markets gained ground on both sides of the Atlantic. In Europe, the pan-continental Stoxx 600 closed 0.3% higher, while London's FTSE 100 gaining a similar amount. Across the pond, the US benchmark S&P 500 added 0.65%, closing at a fresh all-time high.

Turning to Thursday's data, employment figures were the order of the day, though economic releases had little immediate impact on price action.

From the eurozone, data showed the unemployment remaining at a post-crisis low of 7.5% in November, though the low unemployment rate has yet to exert significant upward pressure on wages, giving the ECB a conundrum and potentially evidencing structural issues in the jobs market. 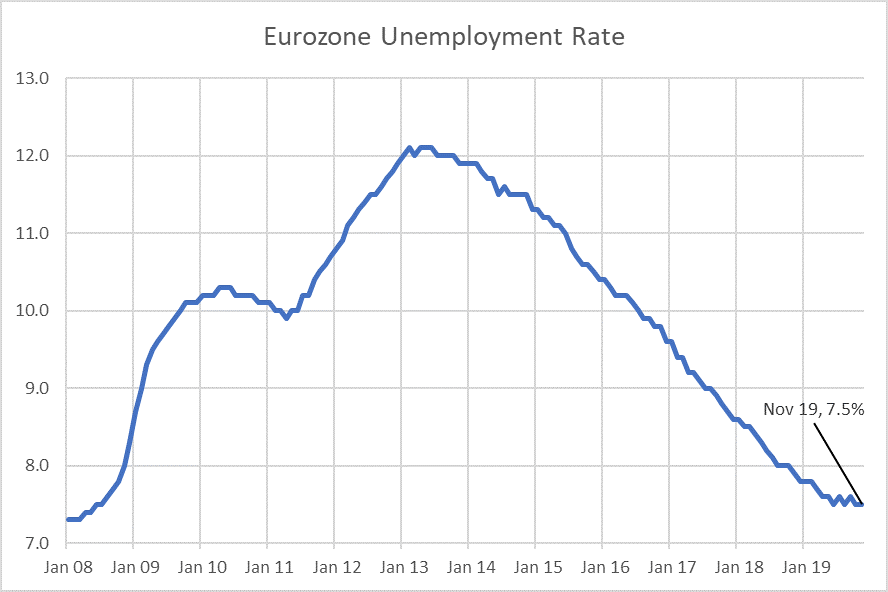 Across the pond, last week's initial jobless claims fell to a 5-week low at 214,000, representing a fourth consecutive decline. This is a reassuring sign given the surprise jump in claims in early December, which may have to be put down to difficulties in seasonally adjusting the data. 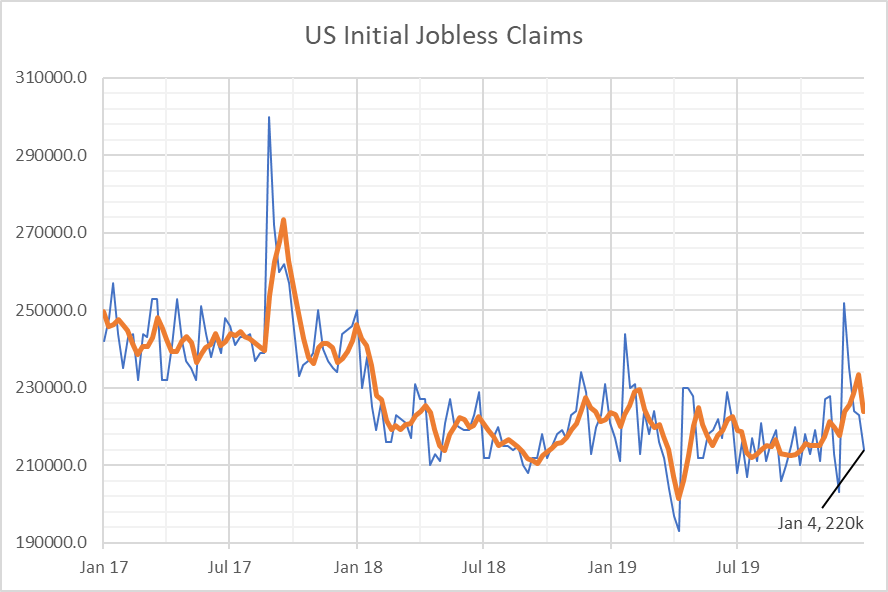 It's the first Friday of the month, and that means only one thing. For the first time this year, it's jobs day.

The monthly US labour market report, referencing December, will be released this afternoon, with expectations for headline nonfarm payrolls to have increased by 164,000 - representing a pullback from November's blockbuster gain of 266,000. For context, the 3-month payrolls average is 205,000, while the 12-month average stands at 184,000. 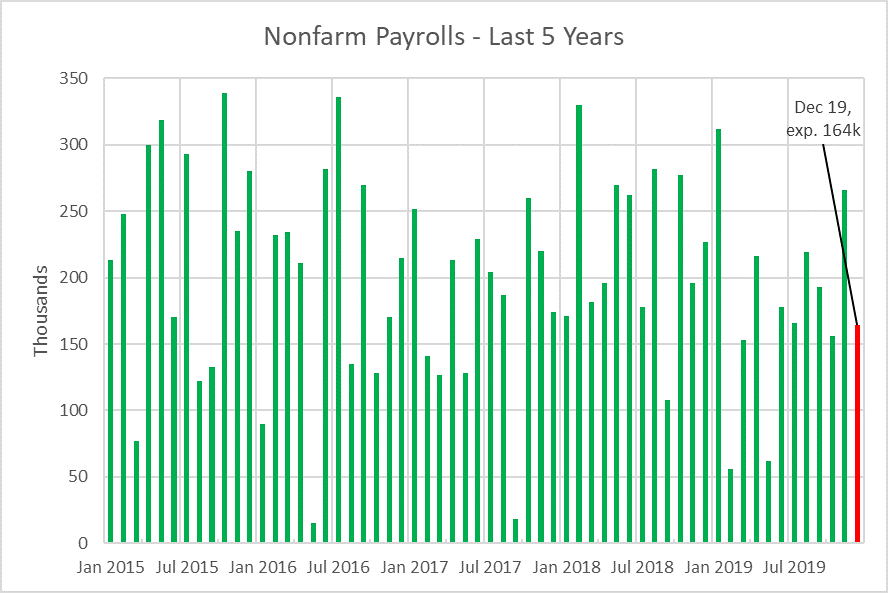 Leading indicators heading into jobs day paint a positive picture. This week's ADP employment report pointed to a gain of 202,000; the employment component of the ISM non-manufacturing report remained at a healthy 55.2; while weekly jobless claims are trending lower, and hit a 5-week low last week. In fact, the only negative heading into the report is the employment component of the ISM manufacturing report, which read a disappointing 45.1.

As a result, the risks to the payrolls number appear balanced to the upside, however do look out for a further slowdown in hiring in the manufacturing sector.

Meanwhile, the other areas of the labour market report are set to point to the jobs market remaining tight. Unemployment is expected to have remained at 3.5% last month, representing the lowest joblessness level since 1969, and pointing to the US economy being at - or extremely close to - full employment. 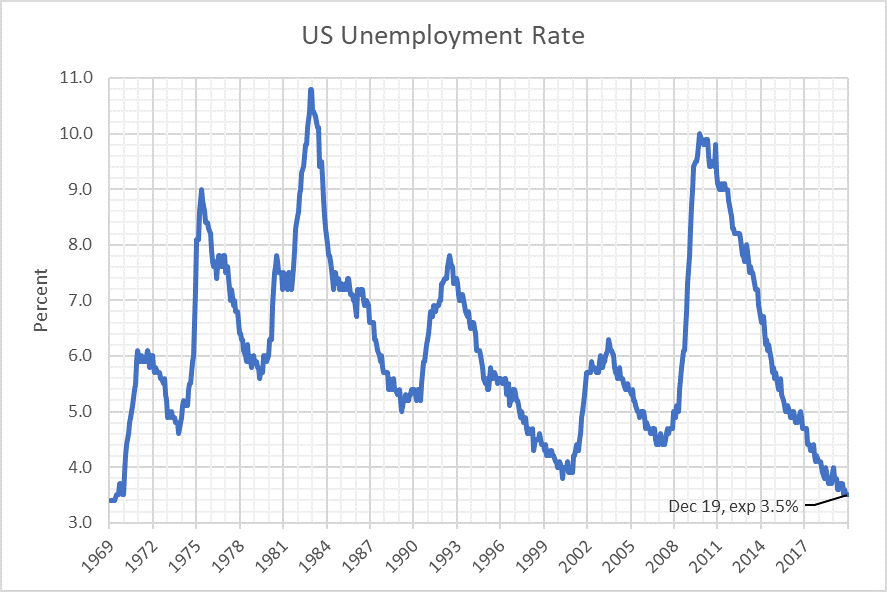 The continued low unemployment rate should also continue to keep wages well supported. Expectations are for average hourly earnings to have increased by 3.1% YoY, and by 0.3% MoM; both figures representing a healthy pace of earnings growth.

For the dollar, and the Fed, the report is unlikely to significantly rock the boat, with both the greenback and monetary policy being driven largely by geopolitical developments at present. On the whole, the jobs report should represent the broader US economic trend of a slowing manufacturing sector, and a strong services sector.

North of the US border, the labour market will also be in focus, with December's Canadian jobs report also due today.

Expectations are for the labour market to bounce back from an abysmal November which saw unemployment rise to a 14-month high, and the biggest 1-month decline in employment since 2009.

In December, unemployment is expected to have fallen to 5.8%, while the economy is set to have added 25,000 jobs. While a strong print, this would not even offset half of the 71,000 jobs lost in November.

However, the Canadian employment change figure is something of a random number generator, hence be on alert for a surprise in either direction.

Should the employment figures disappoint once again, expect the loonie to come under pressure, and calls for the BoC to loosen policy to grow.

Looking ahead to next week, geopolitical developments are set to remain in focus - both in the form of US-China trade relations, and tensions in the Middle East.

On trade, next Wednesday - the 15th - the White House will play host to a signing ceremony for the 'phase one' US-China trade deal. However, no sooner than the ink is dry on the deal will market switch their attention to the next phase of negotiations, which - as discussed previously - are unlikely to be plain sailing.

Meanwhile, on the data front, markets will pay close attention to the latest inflation figures from the UK, eurozone and US; while also keeping a close eye on the US consumer through December's retail sales report, and January's preliminary consumer sentiment figures. Investors will also get a closer look at the ECB's December policy decision, with minutes from the meeting set to be released next Thursday.

Finally, if you would like to find out my expectations for the global economy and G10 FX in the year ahead, you can read my full 2020 outlook by clicking here.