The latest market highlights and our views on the key developments as a fresh week gets underway with sentiment steadying; the dollar rallying; bond yields falling; and crude cratering as the coronavirus pandemic remains the centre of attention.

The trading week got off to a bit of a perplexing start on Monday, with markets striking something of a mixed tone as investors continued to monitor the ongoing coronavirus pandemic.

As expected, and with something of an inevitability about it, the number of confirmed cases continues to increase, closing in on 750,000 worldwide. Of these, as the below shows, 34,000 have sadly died with the virus, while 152,000 have recovered.

There are, however, some hopeful signs, though the worst appears to be far from over. Spain's foreign minister noted that the infection curve appeared to be 'flattening out'; Johnson & Johnson announced that human testing of a coronavirus vaccine would begin by September.

Largely as a result of these glimmers of positive news amid the ongoing tunnel of doom that the world finds itself in, equity markets caught a bid on Monday, aided by investors continuing to digest recent monetary and fiscal stimulus packages.

In Europe, the pan-continental Stoxx 600 ended the day 1.1% in the green, closing close to session highs after a steady grind higher throughout the day. Most bourses also closed the day in positive territory. 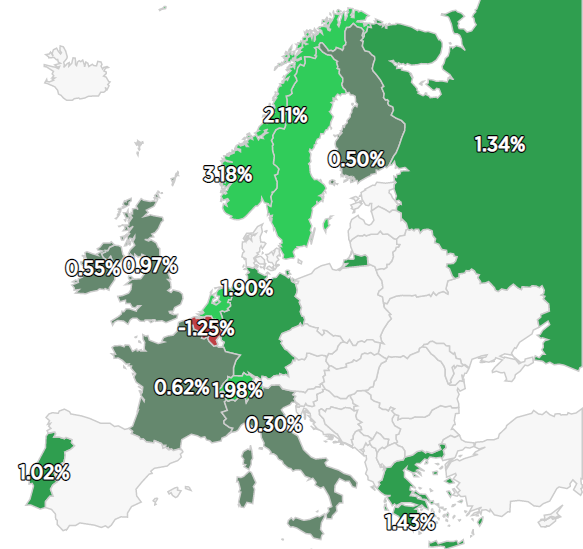 Banking and financial stocks led the losses after the ECB recommended that no dividends are paid until October, while healthcare stocks rallied on hopes for a coronavirus vaccine. Meanwhile, London's FTSE 100 added around 0.9%, lagging slightly as a result of the slightly stronger pound.

Across the pond, US markets also gained ground, chalking up their first Monday gain in four weeks as sentiment improved. The benchmark S&P 500 ended the day 3.35% higher, while the 30-stock Dow Jones Industrial Average and tech-heavy Nasdaq also added more than 3%.

Nearly all sectors - barring aerospace - ended the day in the green; though with trading volumes significantly thinner than usual the rally lacked conviction. 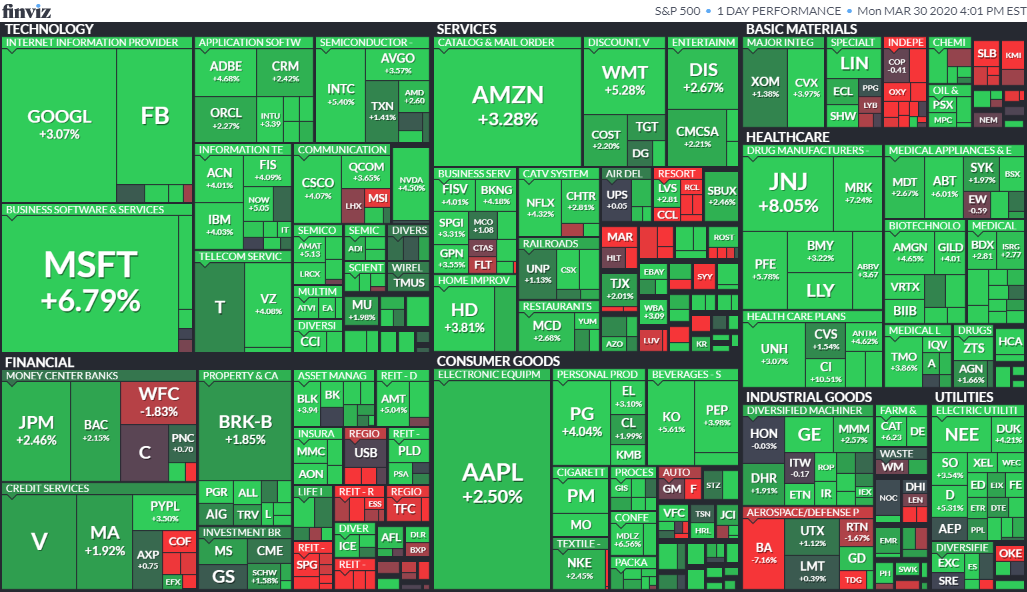 Volatility, meanwhile, remains elevated, with the VIX continuing to hover just below the 60.0 handle, implying a daily move of around 3.9%. Hardly evidence of a market that is about to be becalmed.

As a result, and due to the continued expectation for further negative coronavirus news, I remain inclined to label the present moves as a 'bounce' rather than a 'bottom' to the current bear market. Either way, I would prefer to see a re-test of the recent lows before making a more definitive call.

Furthermore, it is, at this point, important to question how much of Monday's strength in equity markets came as a result of improving risk sentiment, and how much was as a result of month-end rebalancing flows. I would expect a significant portion of the moves to be due to the latter, with significant equity inflows to be expected after this month's wild volatility.

Turning to FX and the dollar found a bid as a new week got underway, chalking up a gain of 0.85% against a basket of peers, its first daily advance in five, and biggest one-day advance in a fortnight. The dollar's rise was also likely a result of month end flows, with perhaps a sprinkling of demand for safe havens thrown in as well.

Due to the dollar's advance, most major peers lost ground: 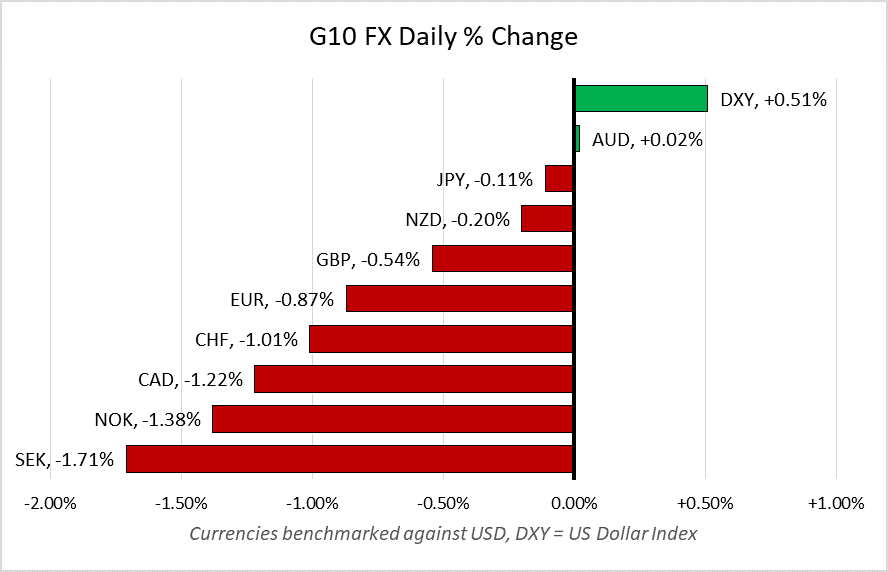 Of particular interest are the significant downside moves in both the Canadian dollar and the Norwegian krone, which came as a result of a plunge in oil prices - covered below.

Sterling, meanwhile, experienced a relatively subdued trading day - recovering quickly from an early 75 pip decline to spend most of the afternoon chopping around the $1.24 handle. As mentioned in yesterday's Note, the pound has recovered around half of this month's losses, and has further room to press higher - with sterling likely to benefit if the risk environment improves further.

Finally, I wanted to take a look at oil prices, after crude cratered on Monday. Global benchmark Brent settled almost 10% lower at $22.63bbl, while US WTI crude tumbled more than 6%, briefly dipping below $20bbl.

The price of oil has tumbled due to something of a perfect storm occurring - with demand having evaporated as a result of the coronavirus pandemic at the precise moment Russia and Saudi Arabia tore up the OPEC+ alliance and began a price-sapping war for market share.

On Monday, both of these situations worsened. Airlines began to ground their fleets due to the coronavirus, resulting in even lower oil demand; while Saudi Arabia announced it would produce a record 10.6mln bbl per day in May - the fastest rate of production on record.

These developments, and the scant signs of the situation changing any time soon, has resulted in the Brent curve moving into a steep contango - a phenomenon where the futures price is greater than the spot price. This encourages traders to store oil to sell on in the future, however the world is now also experiencing a shortage of sites in which oil can be stored. 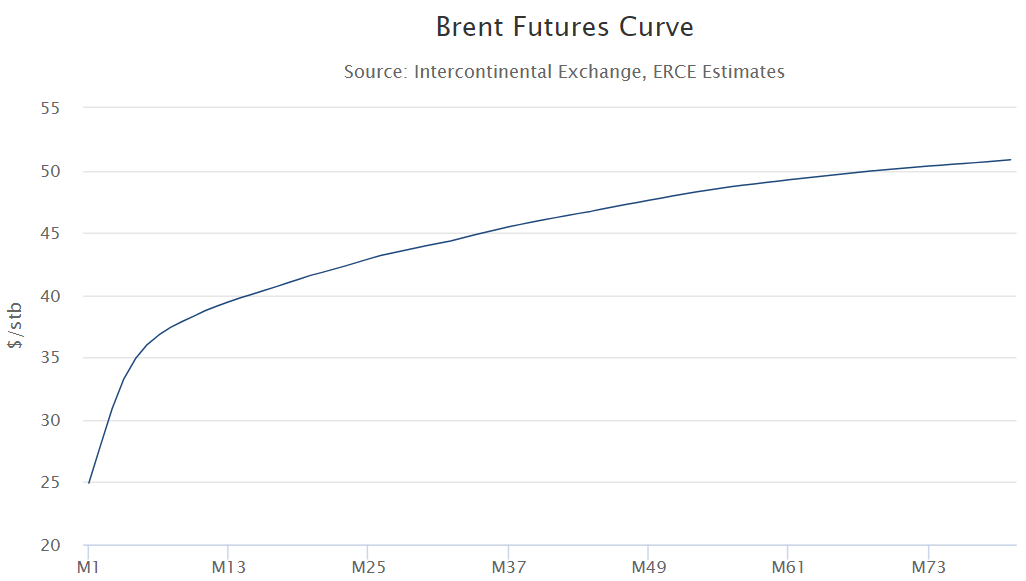 The oil market is something that will need to be watched closely over the coming weeks for two reasons.

Firstly, the ongoing slide in prices - which appear to be on a one-way train lower - will continue to exert pressure on petrocurrencies; hence the CAD and NOK will likely continue to face stiff headwinds.

Secondly, and perhaps more importantly, the ongoing price plunge is likely to force higher cost producers - such as those in the US shale industry - to cease production which will likely become unsustainable. This will likely have implications across asset classes - particularly in the credit market - due to the huge potential for debt default, with the industry as a whole having approximately $86bln worth of debt due in the next four years.