The latest market highlights and our views on the key developments as sentiment stabilises with the fiscal response to the pandemic in focus; the dollar maintains a steady bid amid the ongoing funding squeeze; and overnight policy decisions from the BoJ and RBA come into focus.

It's getting to the point where I've run out of synonyms for 'dead cat bounce', but that was once again what was in evidence on Tuesday as risk appetite rebounded after Monday's violent sell-off.

However, before getting to the markets, it's important to cover the latest developments in the coronavirus pandemic as investors continue to assess the extent of the virus and the economic fallout.

Unsurprisingly, the virus continues to spread at a rapid pace, with confirmed infections now numbering more than 190,000 globally; with Europe remaining the 'epicentre' of the pandemic. 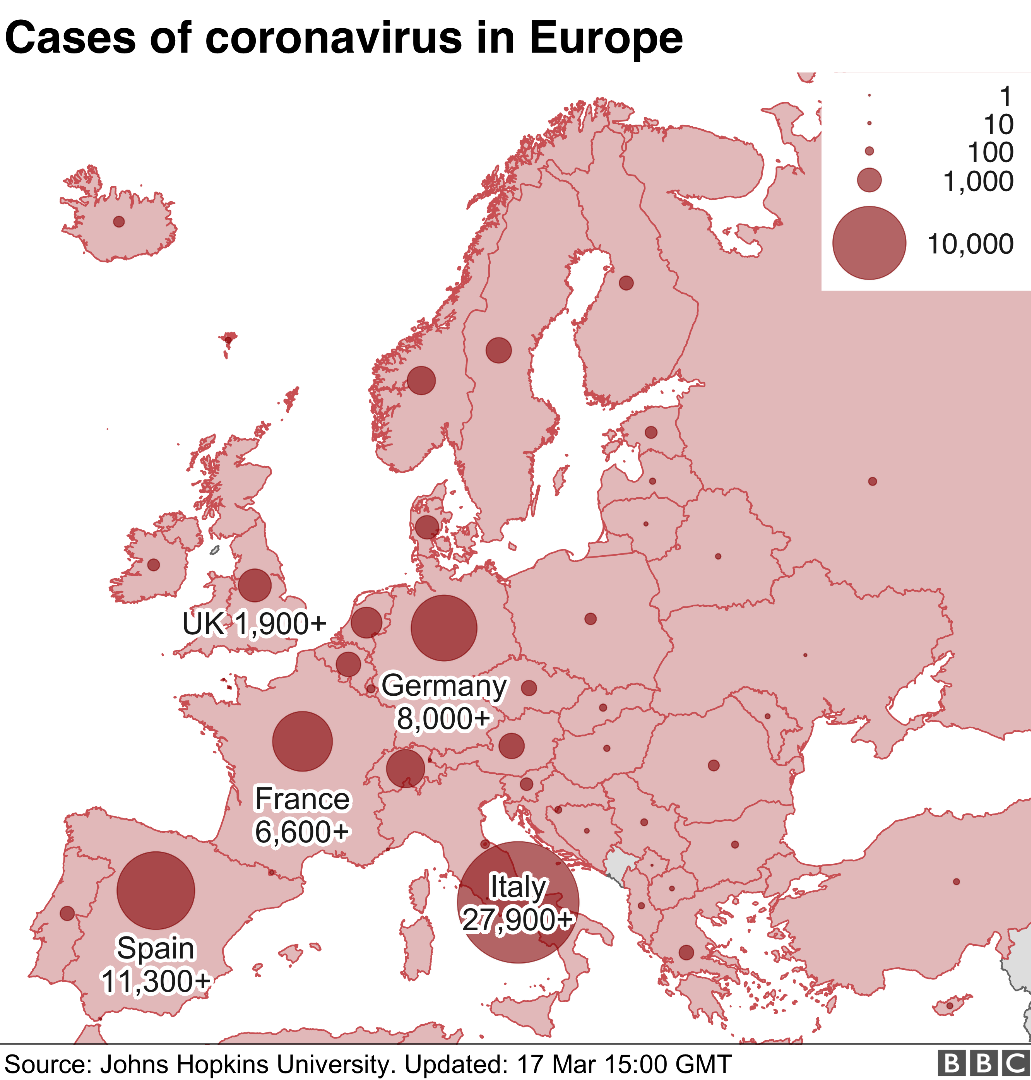 Here in the UK, there are now nearly 2,000 confirmed cases of COVID-19, while the Government continue to warn that the nation is approaching the 'fast growth' part of the upward epidemic curve. 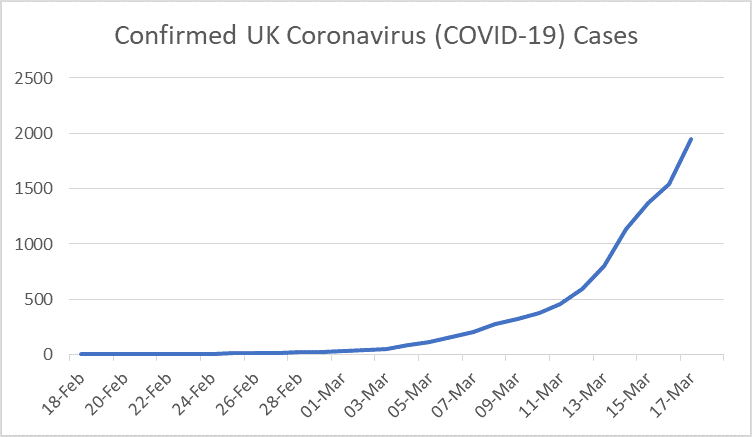 Due to this, as widely covered on Monday, the Government have introduced a host of more extensive 'social distancing' recommendations, including advice to avoid all non-essential travel and social contact.

Of course, these stringent measures will take a significant toll on the UK economy, with at the very least one quarter of negative growth now a near-certainty.

As a result, Chancellor Rishi Sunak - just 6 days after delivering the Budget - announced a fresh round of measures to support businesses and the wider public on Tuesday afternoon, including:

It really is difficult to put into perspective just how significant a package those measures are. Combined, the direct support extended to the UK economy yesterday amounted to more than £20bln, in addition to the £12bln pledged to the UK economy in last week's budget - which feels like a decade ago.

Stimulus packages were also in focus elsewhere, with Spain allocating €200bln to offset the economic damage of the virus, and the Trump Administration considering sending cheques directly to the American people in the next few weeks.

Fire up the choppers, helicopter money may have just arrived.

The host of fiscal stimulus measures, along with the recent monetary policy easing seen around the world, have one simple aim - to prevent the near-inevitable global recession from turning into a longer-lasting depression.

As such, all of the policies announced thus far - and those likely to be seen in the future - are aimed at either ensuring profitable businesses can weather the coronavirus storm, and ensuring that the general population have adequate cash flow to tide them over this period.

The increasing hopes of fiscal stimulus helped the modest, but likely temporary, recovery in risk sentiment on Tuesday.

Starting with equities, European bourses experienced a choppy trading day, though ended the day in the green, erasing around half of Monday's losses. 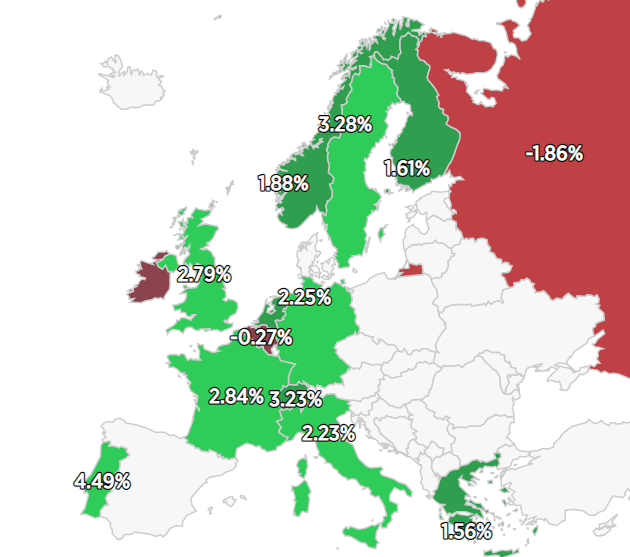 The pan-continental Stoxx 600 ended the day 2.5% higher, with all other bourses gaining a similar amount. Despite this, travel stocks continue to lag the broader index, shedding 6% on the day, with the industry already being hit incredibly hard by the coronavirus pandemic.

Across the pond, US markets also bounced, with the benchmark S&P 500 closing almost 6% higher. Interestingly, the gains were led by defensive stocks -- such as utilities -- showing that investors were somewhat tentative in getting back into the market. 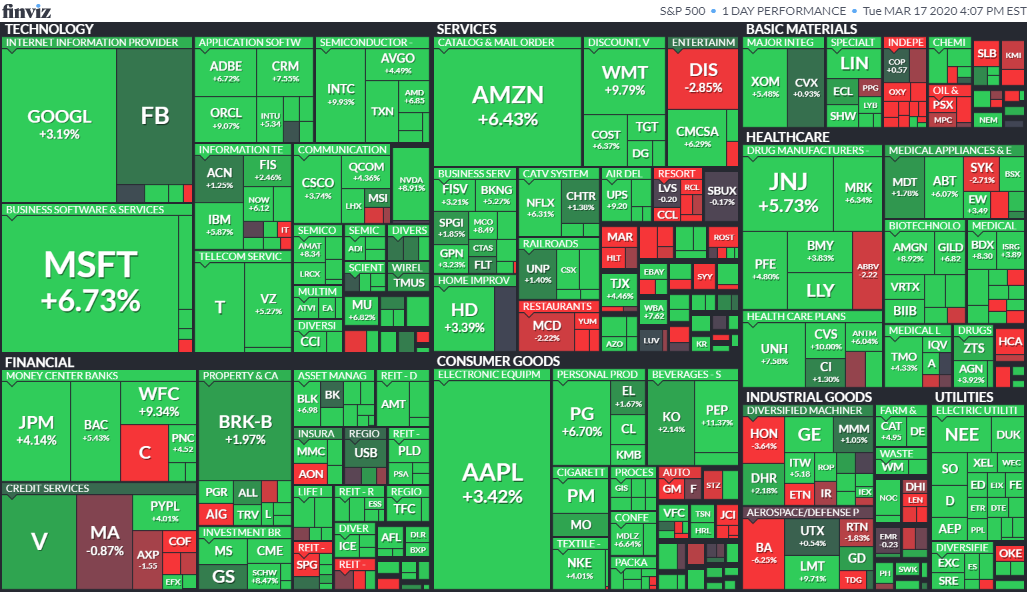 Meanwhile, in the bond market, Treasury yields surged higher across the curve, as a result of both the improving risk appetite and a continuation of the recent 'flight to cash' as investors liquidate positions.

The yield on benchmark 10-year bonds rose by a whopping 22bps, while 30-year yields increased by a similar amount. At the short end of the curve, the yield on 2-year notes ticked just 7bps higher, showing the curve continuing to bear steepen.

Due to this, the spread between 2-year and 10-year yields stands at 58bps, its widest in almost 2 years. However, as mentioned in a note earlier this week, the 2s10s spread usually widens sharply just before an impending recession - a scenario likely in play once again this time around.

Turning to G10 FX, ongoing funding pressures saw the dollar once again pick up a monster bid, with the greenback gaining more than 1.5% against a basket of peers, edging ever closer to the 3-year highs seen in February; while the Bloomberg dollar index - a more broad based gauge - hit its highest levels since 2017 on Tuesday.

The ongoing funding squeeze came despite the continued efforts of the Fed to provide additional liquidity, both through huge $500bln overnight repo operations, and through the launch of a new commercial paper lending facility, aimed at addressing issues in the corporate debt market.

These measures, however, have yet to have the desired effect, particularly the repo operations with take-up severely restricted by dealers' being unable to put up Treasuries as collateral due to bank capital requirements. Hence, the funding squeeze shows no signs of abating just yet.

As a result of the huge bid under the dollar, most majors tumbled to landmark lows on Tuesday.

Sterling, which shed around 1.4%, fell to a 6-month low yesterday, just about managing to cling onto the $1.20 handle before paring some losses after Chancellor Sunak's remarks. Nevertheless, cable has fallen some 8% in just 7 trading days.

Antipodeans fared little better, with the Aussie dollar tumbling almost 2%, falling below the 0.60 handle, and hitting its lowest levels since 2003 (yes, 2003); the chart says it all.

The kiwi dollar also struggled, falling 1.5% to a fresh 11-year low, also trading well below the 0.60 handle; again, the chart says it all.

Lastly, the Canadian dollar also struggled, losing more than 1.3%, trading above $1.42 for the first time since 2016.