The latest market highlights and our views on the key developments as the BoE cut rates to a record low 0.1%; the Fed dig into their crisis era toolkit; and sentiment stabilises as a result of the stimulus packages

Markets continued to closely monitor the ongoing coronavirus pandemic on Thursday, as monetary policy responses to the virus continued - including the Bank of England cutting rates to a fresh record-low.

Firstly, the virus continues to spread at a rapid pace, with more than 225,000 cases now confirmed globally. Furthermore, the number of total deaths from the virus recorded in Italy now exceeds the number of deaths reported in China, providing further evidence that Europe is now the epicentre of the pandemic.

Of course, as mentioned numerous times previously, the pandemic will have (and is having) a significant impact on the global economy, as the 'sudden stop' effects of nationwide lockdowns cause a large, twin supply-demand shock.

Central banks continue to closely monitor the situation, and continue to loosen policy in an attempt to increase liquidity in global markets, and to cushion their respective economies from the impacts of the virus.

The Old Lady of Threadneedle Street was the latest bank to act on Thursday, announcing an unscheduled 15bps rate cut on new Governor Andrew Bailey's fourth day on the job - what a baptism of fire!

Rates now stand at a fresh record-low 0.1%, a level that the BoE have previously indicated is the effective lower bound for the Bank Rate. 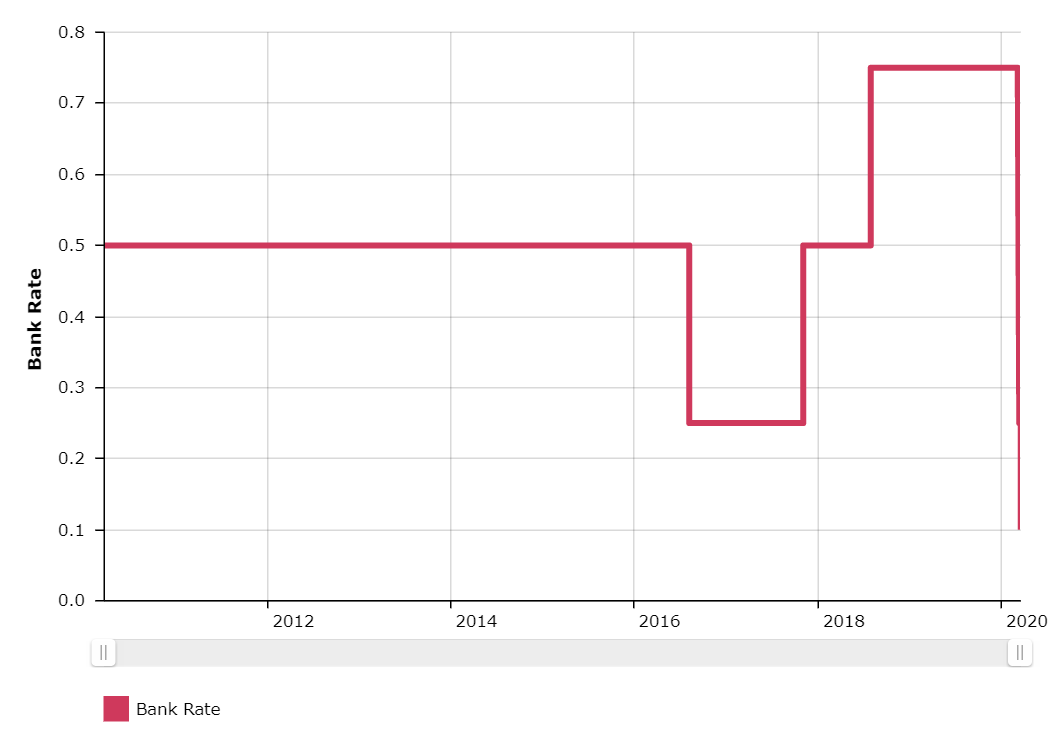 The policy package didn't stop there, however. The BoE also announced an expansion of the term funding scheme aimed at providing credit to SMEs; while also announcing an expanded quantitative easing (QE) programme, pledging to expand holdings of government and corporate bonds by £200bln to a total of £645bln.

Interestingly, the monetary policy decision scheduled for 26th March will still go ahead, so we may get additional policy action from the BoE in a week's time.

Looking at the policy package in more detail, it is clear that the BoE are approaching the limits of what monetary policy can do. For example, when the Bank Rate was 0.75%, previous Governor Mark Carney indicated that the BoE had 250bps of policy headroom, while also indicating that £120bln worth of QE is equivalent to roughly 100bps of rate cuts.

As a result, taking the BoE's actions over the last 8 days together, the Bank have delivered a whopping 232bps of policy easing in a little over a week; comprised of a 50bps cut, a 15bps cut, and yesterday's QE programme equivalent to 167bps of easing. This would, if my back of the envelope maths is correct, leave the Bank with just 18bps of policy headroom left.

With this in mind, the ball is now firmly in the Treasury's court to deliver further easing. Even more expansionary fiscal policies are likely in the coming days, with Chancellor Rishi Sunak 'prepared to take whatever action necessary' and PM Johnson noting that Sunak would deliver greater detail on the Government's plans to help businesses at tomorrow's daily press conference.

As for UK assets, sterling bounced after the BoE's decision, as markets took into account the fact that further rate cuts are unlikely, meaning that the rate cut could mark a bottom for sterling after its recent declines.

Against the dollar, in volatile trade, sterling ended the day just inside negative territory, paring a gain of more than 150 pips, languishing close to the 35-year lows seen on Wednesday.

In the gilt market, yields - which had been trading higher across the curve ahead of the BoE's surprise announcement - tumbled, as expected, after the rate cut and QE programme were announced. 10-year gilt yields ended the day 8bps lower, while the policy-sensitive 2-year gilt yield tumbled 22bps as markets reacted to the BoE's assertion that the increased QE programme would be delivered 'as soon as possible'.

Elsewhere, a host of other G10 central banks have also taken some form of policy action over the last 24 hours:

Starting with equities, European bourses ended the day in the green in choppy trading, supported by the ECB's stimulus package. 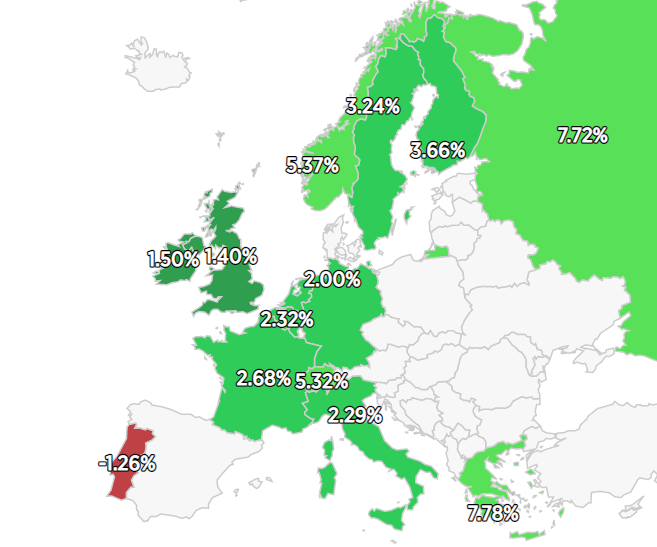 At a broad level, the pan-continental Stoxx 600 ended the day 2.2% higher, while London's FTSE 100 gained 0.95%. Telecoms stocks led the gains, likely benefitting from the surge in remote working, while basic resources lagged behind, ending the day in the red.

Across the pond, US equities also staged something of a 'turnaround Thursday', as all three major indices ended the day in the green. The benchmark S&P 500 closed 0.45% higher, though remains well in bear market territory. Meanwhile, the 30-stock Dow Jones Industrial Average added just under 1%, while the tech-heavy Nasdaq closed 2.3% higher.

As shown by the rise in the Nasdaq, gains were led by a strong rally in technology stocks; while utilities and healthcare lagged behind the pack. 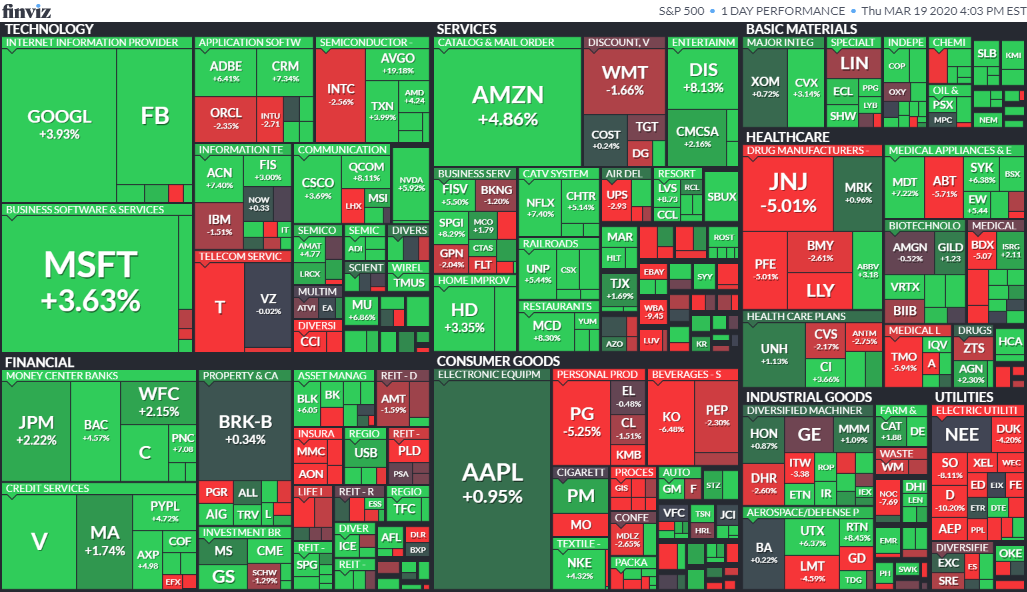 In the bond market, yields declined across the globe on Thursday as central banks enacted the aforementioned stimulus programmes. In the Treasury market, 2-year yields dipped 5bps, while 10-year yields lost 8bps. The 2s10s spread, however, remains elevated, closing at its widest level in two years.

Finally, oil prices rebounded strongly from Wednesday's lows, with US WTI crude chalking up its biggest one-day gain on record, adding more than 24%. However, taking into account that crude has dropped more than 60% this year, percentage changes now account for a much less significant move in dollars, meaning yesterday's move is barely noticeable on the charts.