The latest market highlights and our views on the key developments as sentiment firms amid receding virus fears; Fed Chair Powell gives no surprises in semi-annual testimony; and eurozone industrial production figures are eyed today

Concerns over the virus -- now termed COVID-19 -- outbreak dwindled further on Tuesday, with investors continuing to believe that the global economy will be able to shrug off any decrease in demand; while thinking that China will experience something of a 'V' shaped recovery once the outbreak peaks.

As a result, risk sentiment was once again healthy, with FX markets demonstrating this well.

To the upside, the risk-sensitive Aussie dollar gained just over 0.5%, while the Aussie's antipodean cousin added just over 0.4%.

Conversely, the dollar paused for breath after its recent rally, dipping by around 0.1%, while both the Japanese yen and Swiss franc also faced relatively stiff headwinds.

In other asset classes, global equities continued to rally. The pan-European Stoxx 600 briefly hit an all-time high during morning trade, before paring some of its advance to close 1% higher.

Meanwhile, in the US, the benchmark S&P 500 closed with a gain of 0.11%, though ended the day well off session highs having pulled back from a solid open as the afternoon progressed. Despite the slide, the S&P and the tech-heavy Nasdaq both managed to eke out fresh record closes.

On the data front, yesterday's highlight came in the form of fourth quarter UK GDP figures.

However, the release is perhaps one of the most inconsequential GDP reports in recent memory, with the report having a significant degree of political uncertainty baked in, and the economy appearing to have turned over a new page at the start of 2020.

As such, I shan't dwell on the figures for too long.

On a quarter-on-quarter basis, the UK economy stagnated at the end of last year; in line with both the market's and the BoE's expectations. 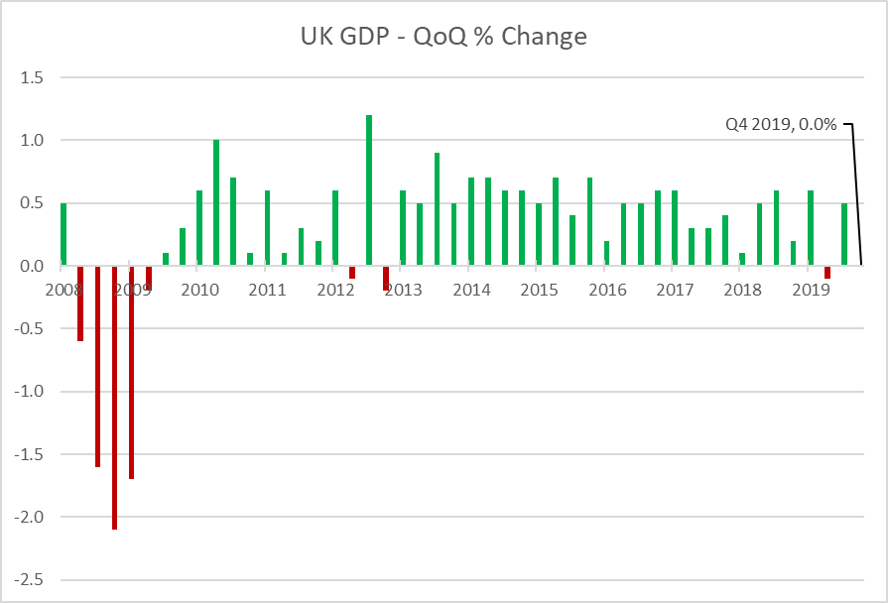 Meanwhile, on an annual basis, the economy expanded at the slowest pace since early-2018, growing by 1.1% YoY. 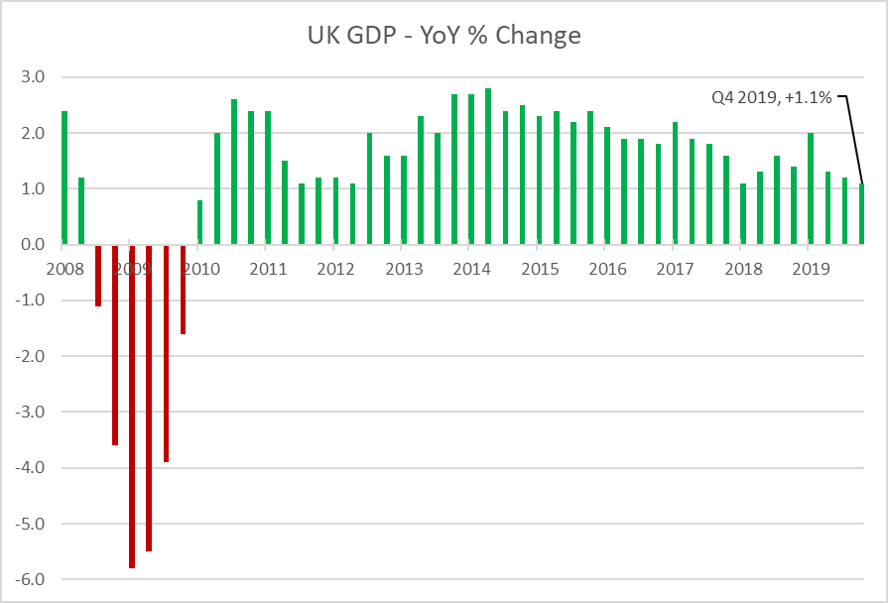 As is to be expected, the UK economy continues to be propelled by the services sector, while industrial output continues to act as a drag on growth; a picture mirrored in most other developed economies. 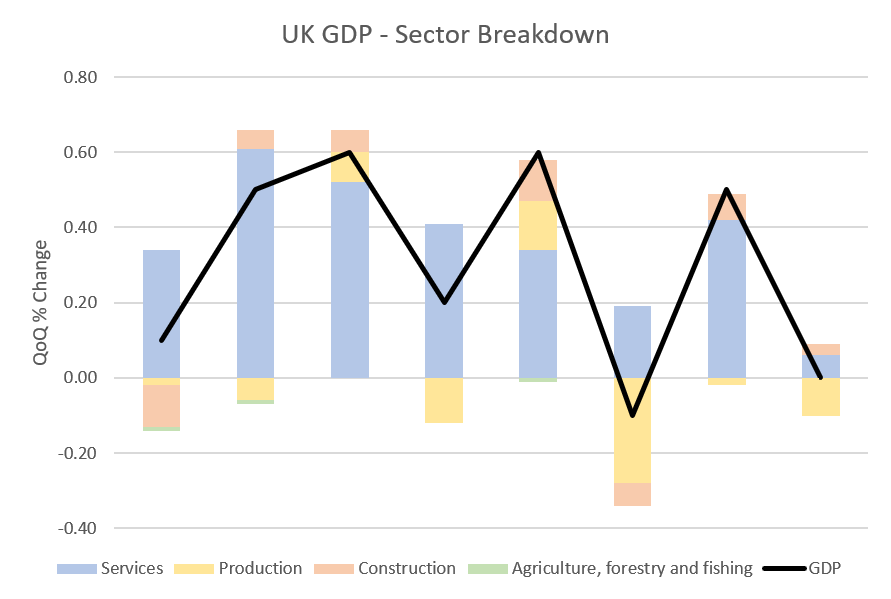 Sterling was largely unfazed by the release, though did rally into the report - spurring the now-typical rumours of an ONS data release being leaked early. The pound ended the day with a gain of around 0.2% against both the dollar and euro.

Across the pond, attention centred on Fed Chair Powell's visit to Capitol Hill for the semi-annual Humphrey-Hawkins testimony.

Powell's appearance was, however, a snoozefest; with the Fed Chair largely echoing the sentiments of the January FOMC statement, while giving little fresh information on the policy outlook.

The Fed Chair reiterated that the economic expansion is continuing at a 'moderate' pace, while repeating that the Fed's policy stance is likely to remain 'appropriate'.

When questioned on downside risks, specifically the coronavirus, Powell - as expected - noted that it remains too early to judge the economic impact of the outbreak, while repeating the Fed's readiness to respond if there is a 'material reassessment' of the outlook.

For many observers - including myself - Powell's testimony was as much of a non-event as these things can be. However, this was not the case for President Trump, who appeared to be glued to his terminal throughout the testimony, noting how US equities drifted as Powell spoke, and repeating his calls for a rate cut, tweeting that the 'Fed rate is too high'.

Taking into account that the market's fundamental view of things has remained little changed for a short while now - namely pricing a 'V' shaped recovery in China, and expecting a continued provision of ample central bank liquidity - it can be useful to look at some technical indicators to gain a clearer picture on the outlook.

Let's begin with the euro, which arrested its six-day slide on Tuesday, recovering after hitting a fresh 4-month low against the greenback.

The situation, however, remains perilous for the common currency, with EUR/USD trading just a handful of pips above the 30-month low of $1.0879 hit last October. A break of this level would likely trigger stops and open room for further downside, with the next support level not until the low-$1.08s. 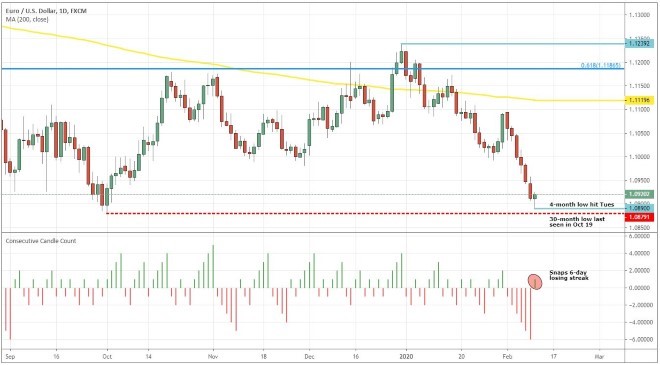 Meanwhile, sterling has also snapped its recent streak of losses, bouncing from the fresh post-election low seen at this week's open, and reclaiming the key $1.2940 level. 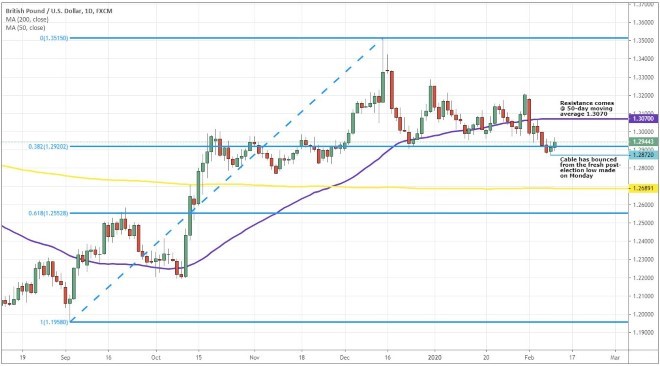 Down under, the Aussie dollar has also bounced from a historical low - recovering from a decade-low $0.6662 printed late last week. Should the pairing break this level to the downside, there is little by way of support before the $0.60 handle. 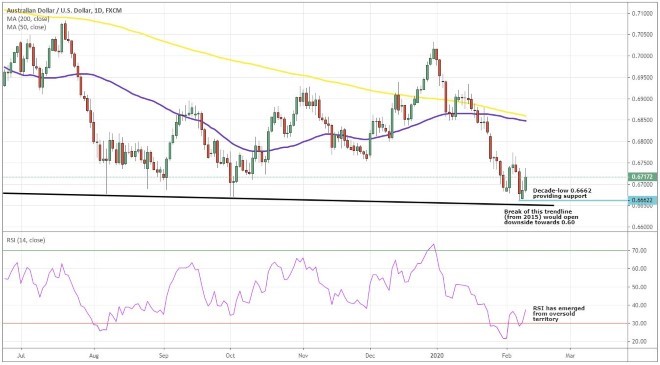 Today's data highlight comes from the eurozone, in the form of December's industrial production report.

After a recent spell of dismal industrial output data from Germany, France and Italy, expectations are not high for this morning's release, with the risks firmly tilted to the downside.

On a month-on-month basis, production is set to have declined by 1.6%, the steepest fall since 2016; while a decline of 2.3% is expected on a year-on-year basis.

Such a release would cast significant doubt on recent indications that the eurozone's manufacturing slowdown has bottomed out, particularly given that the report won't include any China-related drop in demand.

Disappointing figures will likely add to the downward pressure on the common currency, though is unlikely to give the ECB reason to alter their present ultra-loose policy stance.

It is, however, difficult to see how the eurozone economy can return to a solid pace of expansion until the industry slowdown is over.

Fed Chair Powell will once again be on Capitol Hill, for the second day of semi-annual testimony, this time to the Senate Banking Committee. While Powell's prepared statement will be identical to yesterday's, the questions won't be. Don't, however, go expecting any surprises, with the Fed Chair once again likely to play any difficult questions with a straight bat.

Elsewhere, markets will also be eyeing speeches from RBNZ Governor Orr, RBA Governor Lowe, and BoC Governor Poloz for any hints on the policy outlook; with particular emphasis on the latter given the BoC's recent adoption of a dovish, data-dependent stance and expectations for at least one 'insurance' cut this year.