The latest market highlights and our views on the key developments as markets strike a risk-on tone to kick off the final full week of the year, UK and eurozone PMIs disappoint, and UK employment data comes into focus today

The last full trading week of 2019 got underway yesterday with risk appetite remaining healthy, despite disappointing data releases from both sides of the Channel.

Starting with risk appetite, markets struck a risk-on tone on Monday, with investors buoyed by the removal of two key risks to the outlook at the tail end of last week.

The agreement of a phase one US-China trade deal has, despite there being scant detail of the agreement, avoided the imposition of additional US tariffs on Chinese imports, and seen a thawing of tensions between the two superpowers.

Meanwhile, in the UK, the Conservative's landslide victory at last week's general election has seen markets price in a smooth, orderly Brexit at the end of January; while pricing out the risk of a Jeremy Corbyn-led Labour government.

These two factors combined have boosted risk assets, with some of the rally likely fuelled by a fear of missing out - i.e more investors piling into riskier assets, not wanting to miss out on the gains. The old saying 'the trend is your friend' springs to mind here.

As a result, safe-haven FX continued struggled on Monday, with the dollar dipping 0.1%, the franc shedding 0.2%, and the yen losing 0.3%. Conversely, antipodeans remained well-supported, with the Aussie and Kiwi dollars both adding 0.4% apiece.

The better risk mood also spread to equity markets, where the Santa rally continues. In Europe, the pan-continental Stoxx 600 gained 1.5% to close at a fresh record high, while London's FTSE 100 added 2.7%, the index chalking up its biggest 1-day gain since 2016. US markets also rallied, with the benchmark S&P 500 adding 0.9%, closing at a fresh all-time high.

Bond markets aren't seeing much love, however, with the rotation into riskier climbs seeing fixed income left behind. Treasury yields were around 5bps higher on Monday.

Eurozone PMIs - No Signs of Improvement

Turning to Monday's data, the ongoing eurozone manufacturing recession extended into an 11th consecutive month yesterday, with December's flash PMI printing 45.9. The reading, which was well below expectations, points to the slowdown deepening into the festive season, largely as a result of output in the industry falling to an 86-month low.

Meanwhile, despite the deepening manufacturing woes, activity in the euro area services sector remains resolute, with December's flash PMI ticking up to a healthy 52.4 - representing the fastest pace of expansion in 4 months.

However, taking into account the manufacturing slowdown, the composite PMI - which accounts for output across the whole economy - remained unchanged at 50.6, indicating that the fourth quarter saw the weakest pace of expansion since 2013.

Unfortunately, there appears to be little reason for optimism on the horizon, with stalling new orders, and job creation practically at a halt, painting a bleak outlook for the early part of next year.

The euro, however, was largely unfazed by the disappointing data, ending the day around 0.2% higher, benefitting from a weaker dollar. 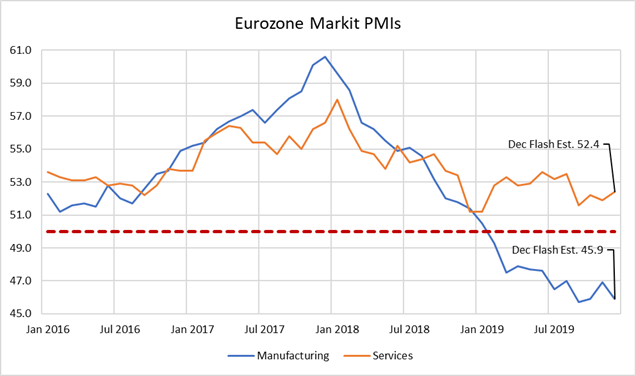 Monday's other notable release came from the UK, also in the form of December's flash PMI figures.

The data painted a relatively bleak picture of both the manufacturing and services sectors, which both remained in contraction, with the respective PMIs reading 47.4 and 49.0, both well below the crucial 50.0 barrier between expansion and contraction.

According to Markit, the ongoing contraction was driven by three factors; political uncertainty, a lack of Brexit clarity, and continued subdued global growth. As a result, with the first two points seemingly resolved by the election result, one can perhaps expect the PMI to improve in the coming months. 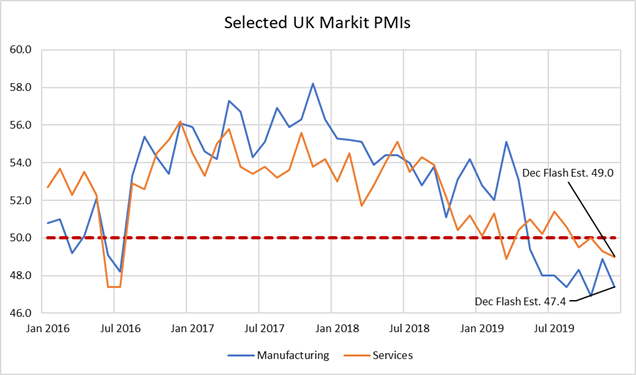 The UK's economic health check continues today, with the latest employment figures set to be released this morning.

The data, referencing October, is set to show unemployment ticking up to 3.9%, the highest level since August; while wages - both including and excluding bonuses - are set to have increased at 3.4% YoY, the slowest pace since April and 0.2% lower than the previous release.

The labour market figures are important, not just for gauging the health of the economy, but with a number of Bank of England policymakers paying particular attention to developments in the jobs market.

At November's policy meeting, the two dissenters voting for an immediate 25bps cut - Michael Saunders and Jonathan Haskel - flagged a deteriorating employment picture as one of their reasons for desiring additional policy accommodation. Should today's release be softer than expected, more policymakers may be tempted to join the dovish camp, potentially exerting pressure on sterling.

There are a number of other releases due today, however all are of a lower tier, and shouldn't have a significant impact on price action.

From the US, markets will get another read on the health of the housing sector, with November's housing starts and building permits due. Investors will also receive further insight into the health of the US manufacturing sector, with November's industrial production report set to show production increasing at 0.8% MoM, the fastest pace in well over a year.

Meanwhile, trade data is the order of the day from other G10 economies, with the eurozone and Japan set to release their latest trade balance reports, and New Zealand set to release third quarter current account data.

Finally, today sees a relatively busy calendar of central bank speakers. Headlining the calendar will be this evening's remarks from Bank of England Governor Carney, however don't expect any comments on monetary policy due to us being in the Bank's pre-meeting purdah period.

From the US, remarks from New York Fed President Williams, hawkish Boston Fed President Rosengren, and non-voting Dallas Fed President Kaplan should all affirm the Fed's neutral policy stance - with the policymakers likely to repeat that rates remain 'appropriate' barring a 'material reassessment' of the outlook.