What an ugly start to the trading week.

After news over the weekend showed the Coronavirus spreading quickly in Italy, Japan and South Korea, investors began the week with a swift rotation into safer climbs, while re-assessing the impact that the epidemic -- which is quickly becoming a pandemic -- will have on the global economy.

The below shows the spread of the virus across the globe. 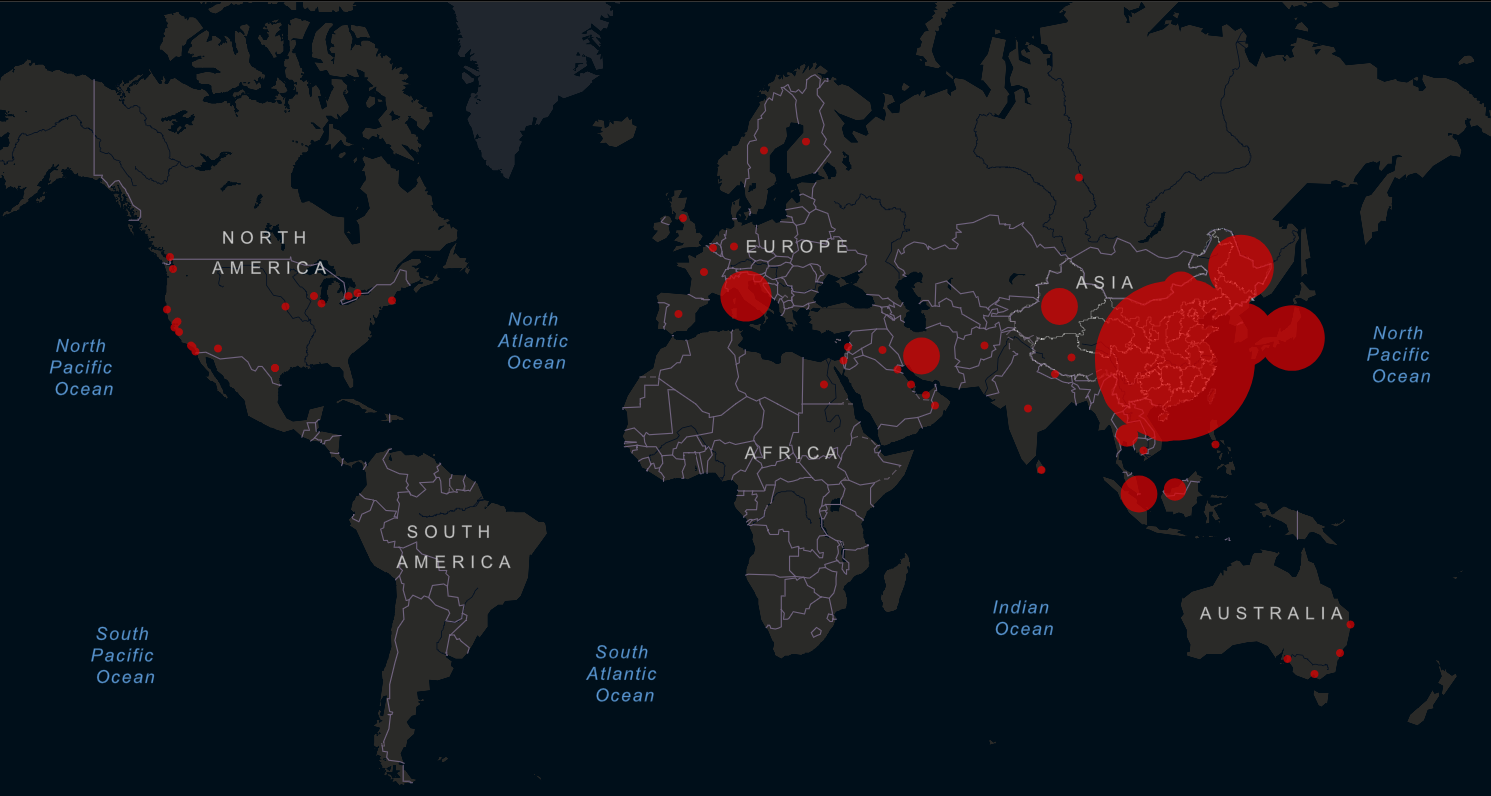 Up until now, markets had been assuming that the outbreak would be largely contained within China, and that a 'V' shaped recovery -- in which a steep slowdown would be quickly followed by an equally steep rebound -- would occur. However, amid signs that the virus is spreading aggressively in other regions, investors are now having to re-assess that base case, taking into account the possibility that the ongoing spread of the coronavirus will have a more significant drag on global growth, and that the economy may be in store for a more prolonged, slower recovery.

These escalating concerns over a deterioration in global demand sparked a significant rotation away from riskier assets, and saw a flight to quality across asset classes.

Starting with equities, the only way to describe Monday is as a bloodbath; with the greed of chasing the record-long bull run quickly giving way to fear over the spread of the virus.

In Europe, it was a sea of red across the continent, as all major bourses ended the day deep inside negative territory. 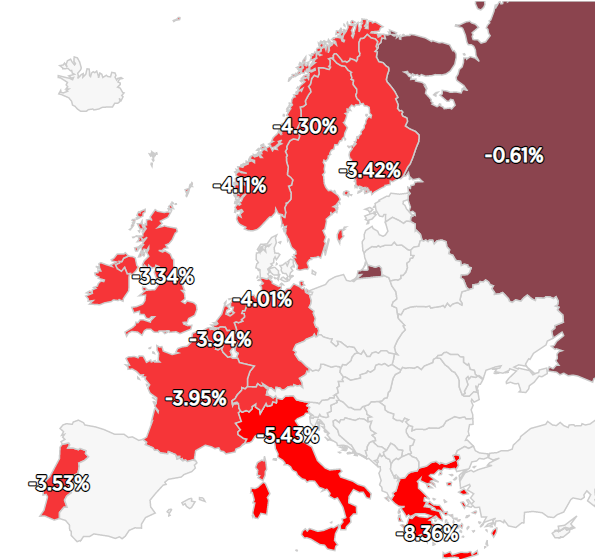 At a broad level, the pan-continental Stoxx 600 closed the day at session lows, down 3.8% with airlines leading the declines, and no sectors ending the day in the green. Drilling down to a country-specific level, Italy - the epicentre of the European coronavirus outbreak - led the losses, with Milan's FTSE MIB shedding 5.45%. London's FTSE 100 was, comparably at least, a modest loser, closing 3.5% lower.

Across the pond, US equities tumbled, experiencing their worst day in two years. The benchmark S&P 500 closed 3.35% lower, while the tech-heavy Nasdaq shed just shy of 4%. The Dow, meanwhile, ended the day 3.55% lower, a decline of more than 1,000 points.

Unsurprisingly, accompanying the fall in equity markets was a sharp rise in volatility. The VIX - a commonly used volatility gauge - which could be considered a 'fear index', shot around 6 big figures higher yesterday, surging to its highest levels since last August. 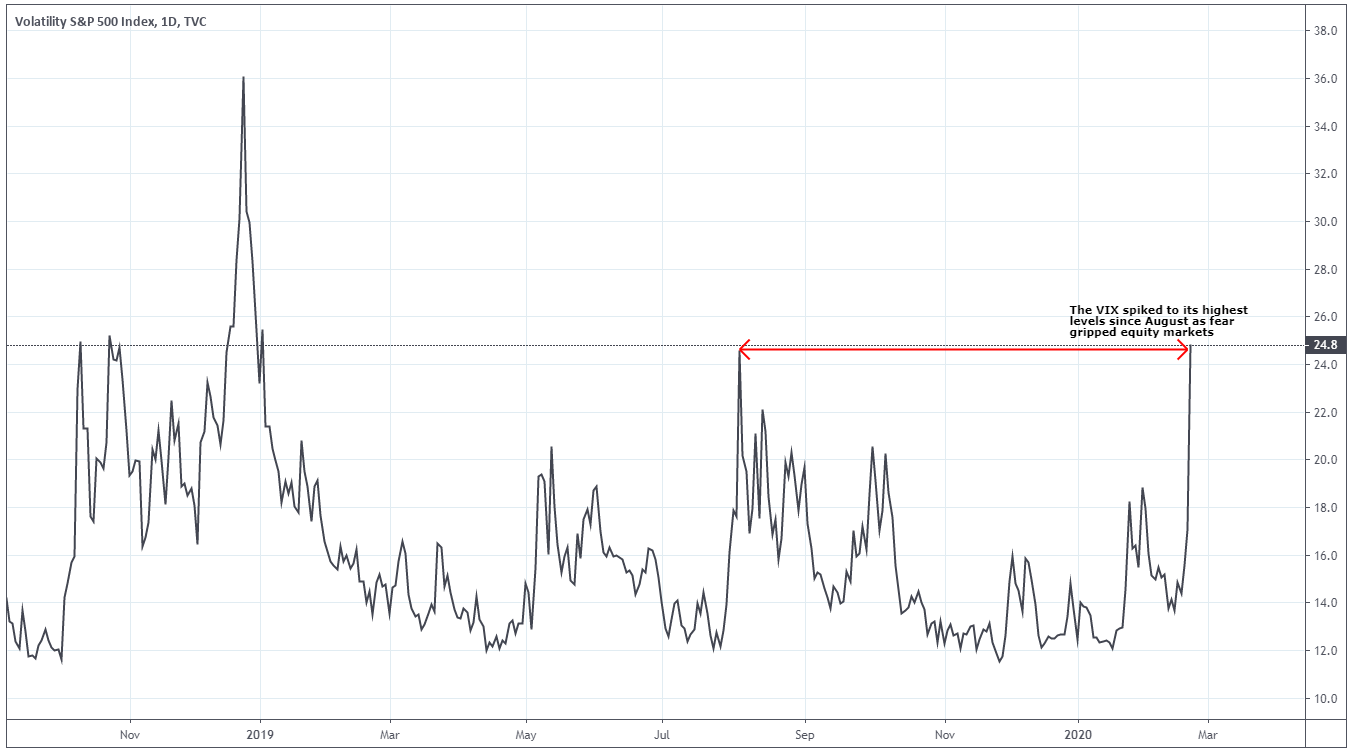 In contrast to stocks, bonds saw heavy inflows amid solid demand as investors sought a haven. Treasury yields tumbled across the curve, with the yield on benchmark 10-year bonds falling 11bps to a 3-year low of 1.372%, just above the record low 1.325% hit in 2016. Meanwhile, 30-year yields fell to a fresh record low 1.81%; while the 3-month 10-year spread headed deeper into inversion at -13bps.

The aforementioned haven demand was also in evidence in gold, with spot prices for the precious metal rising as much as 1.7%, hitting a fresh 7-year high just short of $1,700/oz.

Meanwhile, oil prices tumbled on fears of a significant fall in global demand, that may not be isolated to China. At session lows, US WTI crude was more than 5% lower, briefly entering bear market territory. Both WTI and global benchmark Brent recovered some ground into the close, settling around 3.5% lower apiece.

In G10 FX, it was comparatively quiet, though the rotation into safer climbs was evident.

Safe-havens caught a bid, with the Japanese yen ending the day as the best-performing G10, adding just shy of 1%. Against the dollar, the yen has now pared more than half of its recent advance. 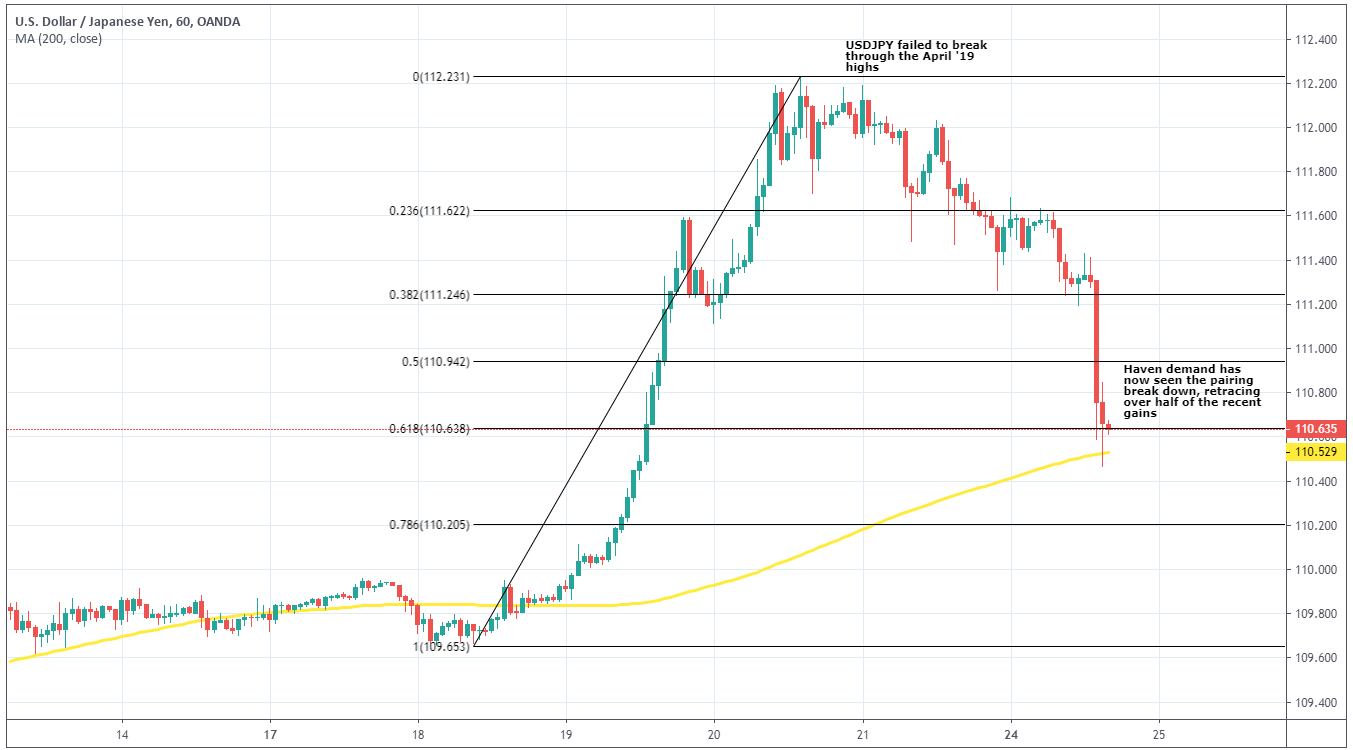 The other typical haven, the Swiss franc, also ended the day higher, adding around 0.2% against the dollar. It is, however, against the euro where the Swissie gets interesting, with the pairing trading at near 5-year lows and the Swiss National Bank (SNB) desperately trying to prevent further appreciation beyond €1.06. 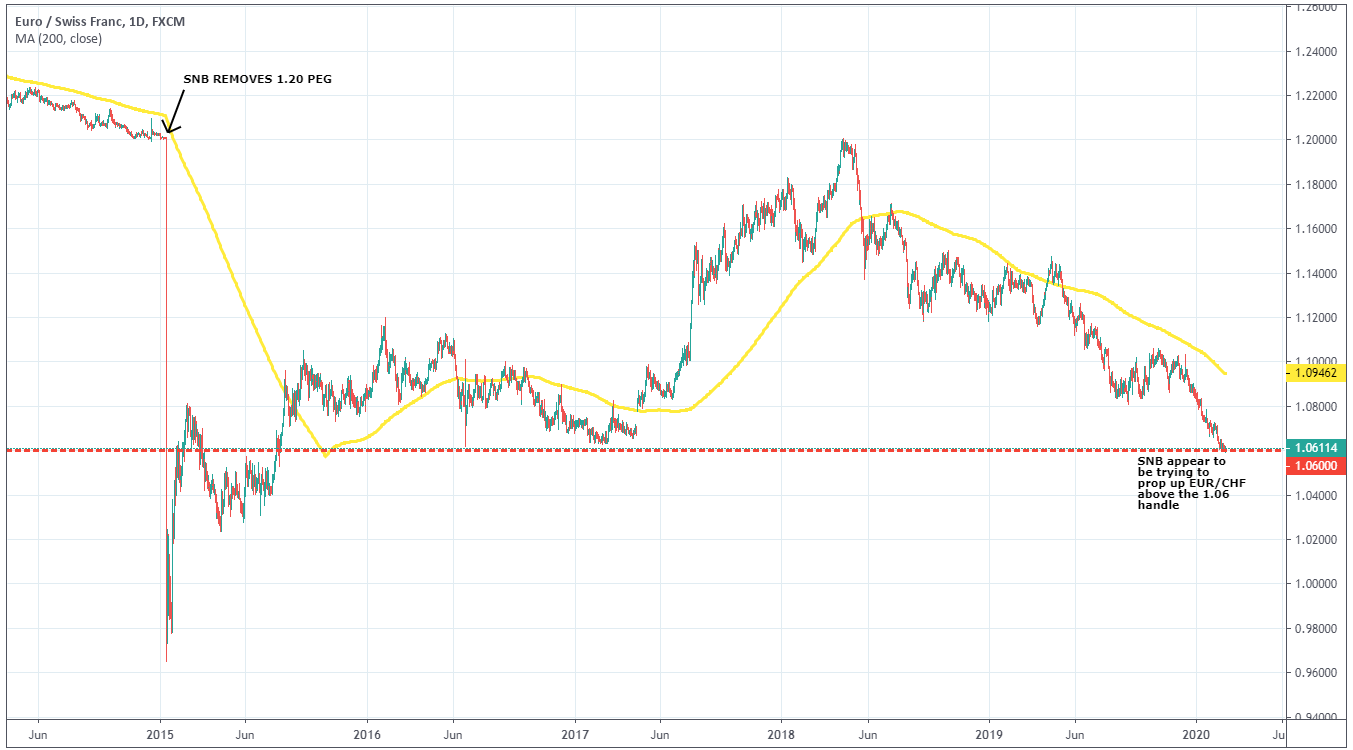 Elsewhere in G10, the dollar trod water, while the euro ticked around 0.1% higher, possibly as funding trades for long US equity positions were unwound. Both antipodeans, meanwhile, faced headwinds, unsurprising given the tendency of both currencies to trade as liquid risk proxies.

Setting aside yesterday's market turmoil, and looking ahead, one area that will likely become an increasing focus over the coming days is the potential policy response to the epidemic.

Central banks have, thus far, taken a 'wait and see' approach to the virus, standing pat until the economic impact becomes clearer. However, as the virus continues to spread, expect calls for looser monetary policy to amplify. This is already being seen in the rates market, where investors now price two 25bps cuts from the Federal Reserve by year-end.

However, there are important questions that need to be answered when talking of a policy response, namely what such a response could do?

The answer, in short, is not a lot. Apart from inflating asset prices, a policy response -- either monetary or fiscal -- is unlikely to significantly stimulate the global economy. The primary reason for this is that demand is not being suppressed due to runaway inflation or the lack of availability of credit. Demand is instead being depressed due to lockdowns, quarantines and concerns relating to the coronavirus outbreak.

Furthermore, some demand has been lost forever, and is irretrievable. For example, those who have been under lockdown for a number of weeks are not going to purchase 40 coffees on their first day back at work to make up for the cups that they didn't purchase over the past month. As a result, the focus is now on the economic recovery once the epidemic has peaked.

More broadly, however, the question for markets is whether Monday's rotation into safer climbs is merely a brief pause in the recent risk rally, or is the beginning of a more protracted roll-over in risk assets?

Only time will tell.

Today's economic calendar is once again sparsely populated, meaning focus is set to remain on developments surrounding the coronavirus outbreak, which will once again be the primary driver of risk appetite. Of today's limited highlights: