The latest market highlights and our views on the key developments as sentiment remains firm for a second straight day on stimulus hopes; sterling goes on a wild rollercoaster ride; and the US weekly jobless claims print is eyed today.

Wednesday brought something of a rarity, back to back days of relatively firm risk appetite.

Despite choppy conditions prevailing, risk sentiment remained firm for the majority of the day, as investors continued to monitor the spread of the coronavirus and digested stimulus packages from governments around the world.

The virus continues to spread rapidly, with well in excess of 400,000 cases now being confirmed globally, and around a quarter of the world's population now under some kind of lockdown measures in an attempt to contain the spread of COVID-19.

The main factor boosting sentiment in the face of the rapid spread of the pandemic was the continued fiscal response from governments across the world, including:

Meanwhile, on the monetary side of things, markets continued to digest the Fed's unprecedented announcement on Monday that they would purchase unlimited quantities of Treasuries; while the ECB's Governing Council were said to be 'broadly in favour' of activating the sovereign debt crisis-era OMT (outright monetary transactions) programme if necessary.

The continued 'kitchen sink' approach to policymaking from global governments and central banks resulted in a second risk-on day in a row, providing market participants with ongoing reassurance that policymakers are determined to prevent a health crisis from spiralling into a financial one. Despite this, conditions -- especially in G10 FX -- were volatile.

Starting with FX, the pound experienced another rollercoaster ride, though with no obvious, single, catalyst behind the moves. Cable (GBPUSD) had gained almost 200 pips by lunchtime, before sliding to erase all of its gains. However, into the London fixing, the pound found its footing, quickly gaining back all of its earlier losses to eke out a modest daily gain.

Some of the pound's move can be explained by sterling now trading as a high beta currency, meaning that the pound is highly sensitive to even subtle shifts in sentiment and has developed a relatively close correlation with equity market returns.

Meanwhile, the Fed's recent policy package, and a reduction in the 'dash for cash' trade seen last week, continues to release some of the upward pressure on the dollar. The greenback fell for a second day running yesterday, a welcome sign for the global economy, shedding around 0.25% against a basket of peers.

Despite this, other majors -- especially the commodity bloc -- faced headwinds, as the scorecard shows: 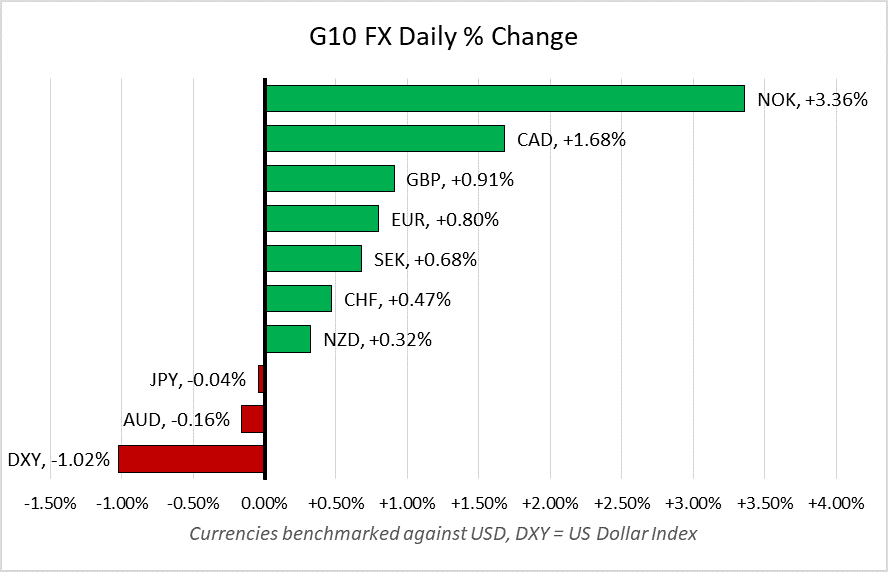 Elsewhere, the improvement in sentiment resulted in a solid bounce in European stock markets, with most bourses and most sectors ending the day in positive territory. The pan-continental Stoxx 600 chalked up a gain of 2.5%, though closed well below session highs having gained as much as 4.5% shortly after the open.

Across the pond, US markets chalked up their first back-to-back daily gains since mid-February, though closed well below session highs after Senator Bernie Sanders threatened to hold up the $2tln fiscal stimulus bill.

At the close, the benchmark S&P 500 was more than 1% higher, while the Dow Jones Industrial Average gained over 2% - though the latter's gain was inflated by a 30% surge in Boeing, which is the fourth most heavily weighted stock in the index.

Gains, at a sector level, were led by defensive stocks, with utilities and healthcare performing well; while the tech stocks struggled. 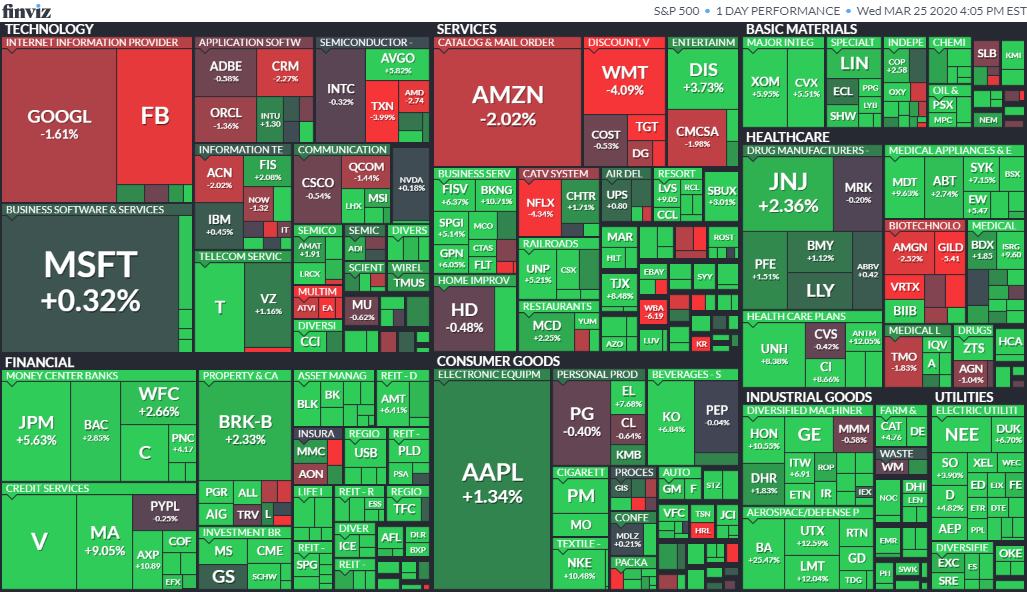 The gains in equity markets weren't, however, accompanied by a significant fall in volatility. The VIX continues to trade around the 60.0 handle, indicating expectations of a roughly 4% daily move - in either direction.

In the bond market, Treasury yields declined, likely as investors hedged their 'riskier' equity positions with bonds. Benchmark 10-year yields dipped 3bps on the day, while the 1- and 3-month bill yields briefly dipped into negative territory for the first time on record.

Commodities also rallied, with Brent and WTI crude gaining 1% and 2% respectively - despite concerns about oversupply - as markets focused on the ongoing coronavirus stimulus packages.