The latest market highlights and our views on the key developments as risk appetite remains buoyed by stimulus hopes; US initial jobless claims surge to a record high; the dollar continues to roll over as funding pressures abate; and UMich sentiment figures are eyed today.

Are we finally seeing some sort of rationality and a semblance of calm return to financial markets?

Sentiment remained firm for a third straight day on Thursday, as the passing of a $2tln fiscal stimulus package in the US senate, and continued chatter of the potential for further monetary policy easing continued to provide investors with reassurance -- despite the fast-moving coronavirus pandemic continuing to sweep across the globe.

The continued improvement in risk appetite means now is an opportune time to look at the curve of market emotions; to try and plot where we presently are, and more importantly to look at what is to come ahead. 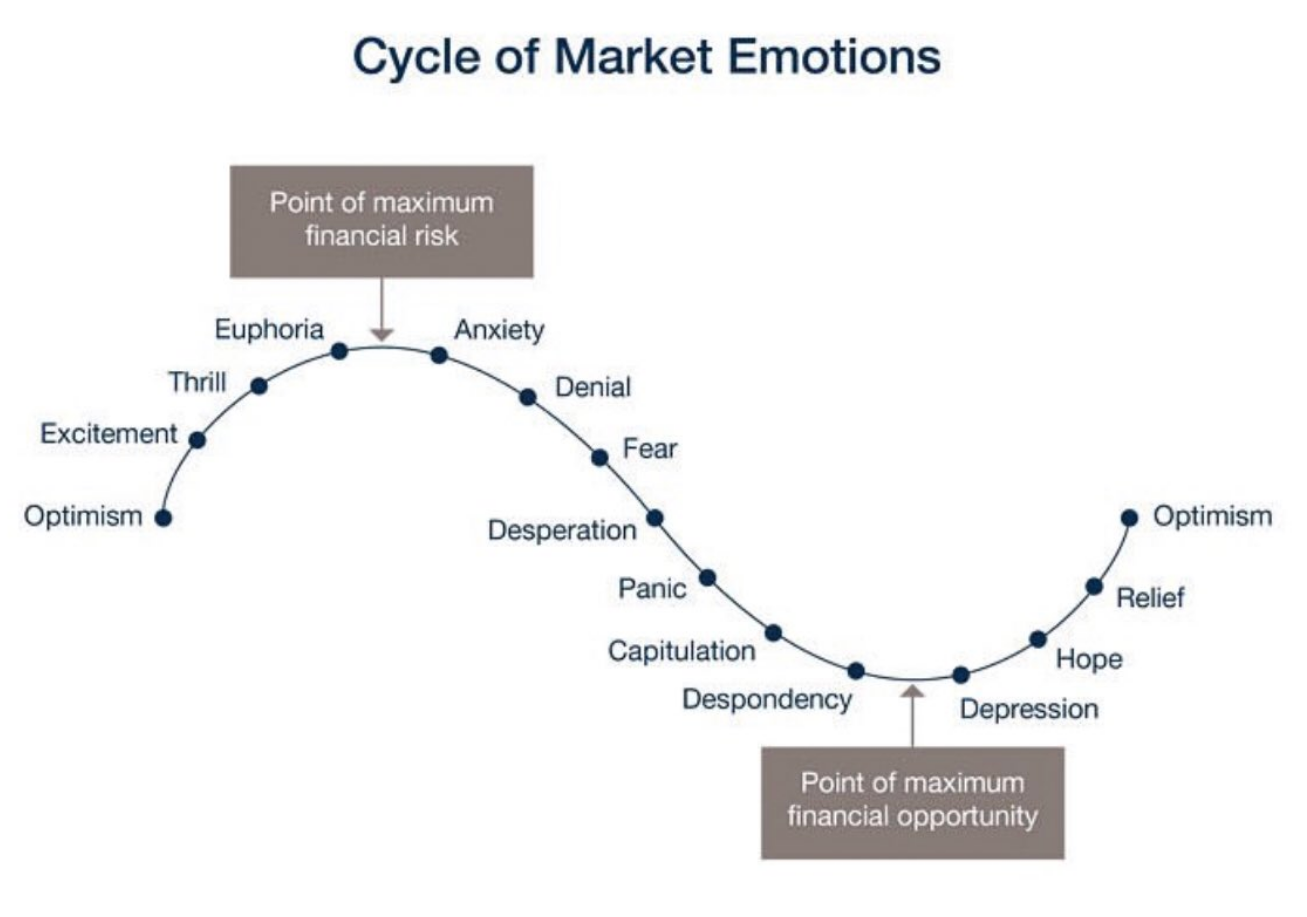 Speaking of the virus, the other curve that we must look at is the infection curve, which continues to increase exponentially, as cases across the world approach the 500,000 mark.

Nonetheless, and as mentioned above, markets chose to focus on stimulus rather than the virus on Thursday, with a host of monetary policy comments reassuring investors that central banks 'still have their backs':

The improvement in risk appetite resulted in the dollar continuing to roll over, with the dollar index falling almost 1.5% to trade below the 100.0 handle for the first time in a week.

Importantly, the greenback is now trading at levels seen when the dollar funding squeeze first got underway, showing that the Fed's liquidity actions seem to have got on top of the funding issues and released the upward pressure on the greenback.

The primary beneficiary of the greenback's weakness was the pound, with cable adding gaining more than 2% on the day -- the biggest 1-day advance in a year -- and reclaiming the $1.21 handle for the first time in 9 days.

The pound's gains were also fuelled by the broader continued improvement in risk appetite, with sterling's high beta characteristics working in its favour. Sterling also advanced against the euro, gaining more than 1%.

Elsewhere in G10 FX, all other majors gained ground against the greenback, with commodity currencies also aided -- in a similar way to the pound -- by the improving risk environment. 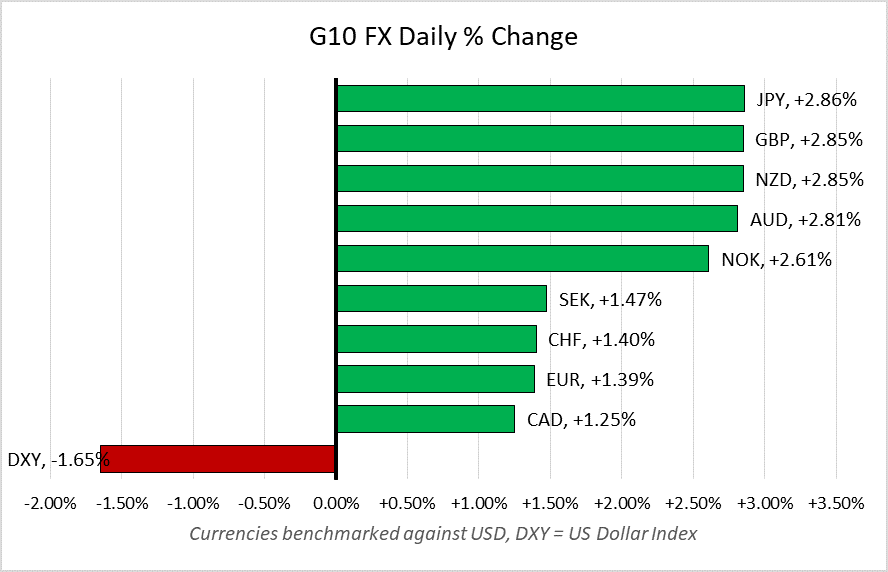 Meanwhile, the improving risk environment helped to push equity markets on both sides of the pond to a third day of gains.

In Europe, it was once again a pleasing sea of green, with the pan-continental Stoxx 600 ending the day almost 1.9% higher, closing at session highs. 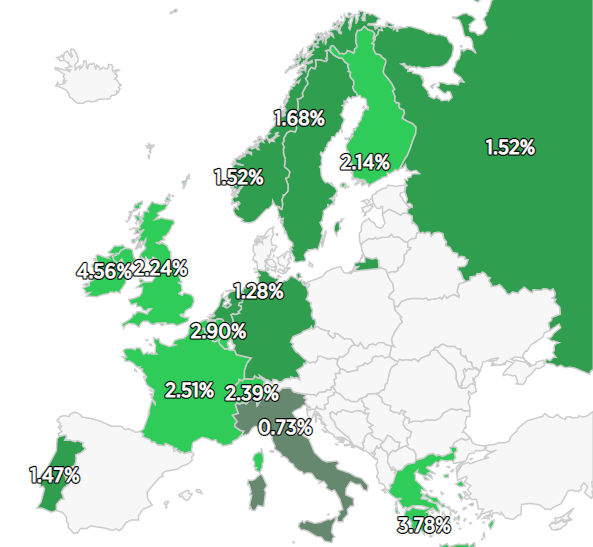 On Wall St, it was also a sea of green, with all three major indices chalking up their first 3-day streak of gains since mid-February. The benchmark S&P 500 ended the day more than 6% higher, recording its best 3-day streak since the 1930s; while the Dow and tech-heavy Nasdaq also chalked up similar gains.

These gains were likely boosted by month-end portfolio rebalancing, with some models pointing to pension funds needing to purhcase as much as $200bln in equities before the end of March.

Having gained more than 20% in the last three days alone, the Dow has now technically begun a new bull run, ending the shortest bear market on record. Though, as mentioned above, and despite signs of stabilisation, the worst may still be yet to come.

All sectors, and most individual stocks, ended the day in positive territory, with gains led by the utilities and real estate sectors. 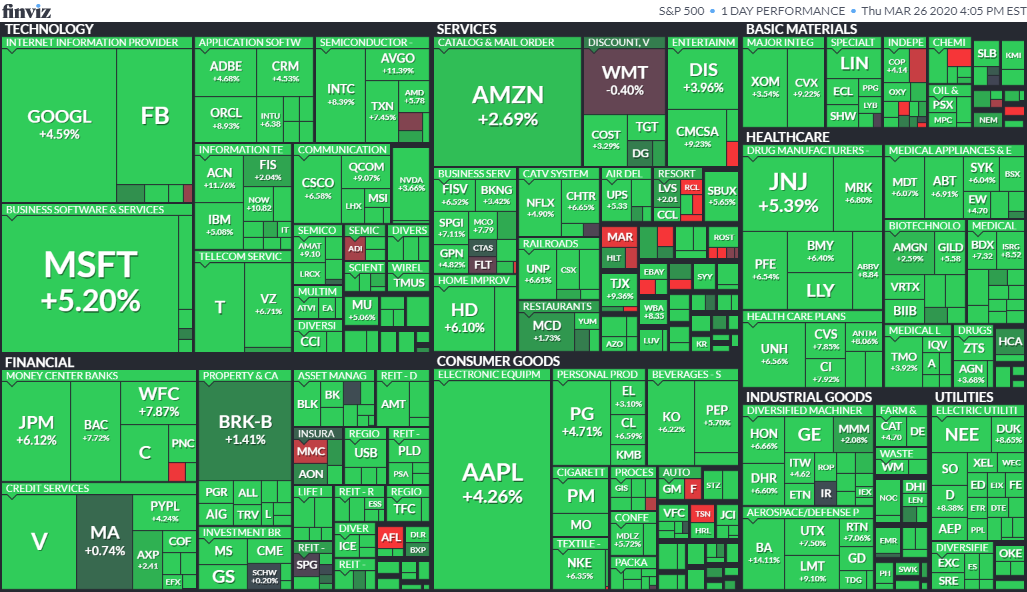 Pleasingly, the equity market rally was met with a modest decline in volatility, with the VIX falling by around 3 figures back to the 60.0 handle - providing further evience of the market finding its feet and settling down.

Meanwhile, the gains in stocks were also met with continued demand for bonds, with yields modestly declining on the day, a sign of investors hedging their 'riskier' positions with exposure to a safe asset. Benchmark 10-year Treasuries fell 3bps on the day to 0.8%, with yields across the curve falling by a similar amount.

In commodities, oil prices snapped their 3-day winning streak as concerns over oversupply resurfaced, and the US energy department withdrawed their tender to buy crude to fill up the strategic petroleum reserve, further denting already evaporating global demand. US WTI crude settled more than 7% lower, while Brent shed around 4%.

The brutal impact of the coronavirus, and associated lockdown measures, on the US labour market became clear on Thursday, with a record 3.283 million people filing for unemployment benefit for the first time last week. The chart really does tell the whole story of how sudden and severe a shock the coronavirus has been to the US economy: 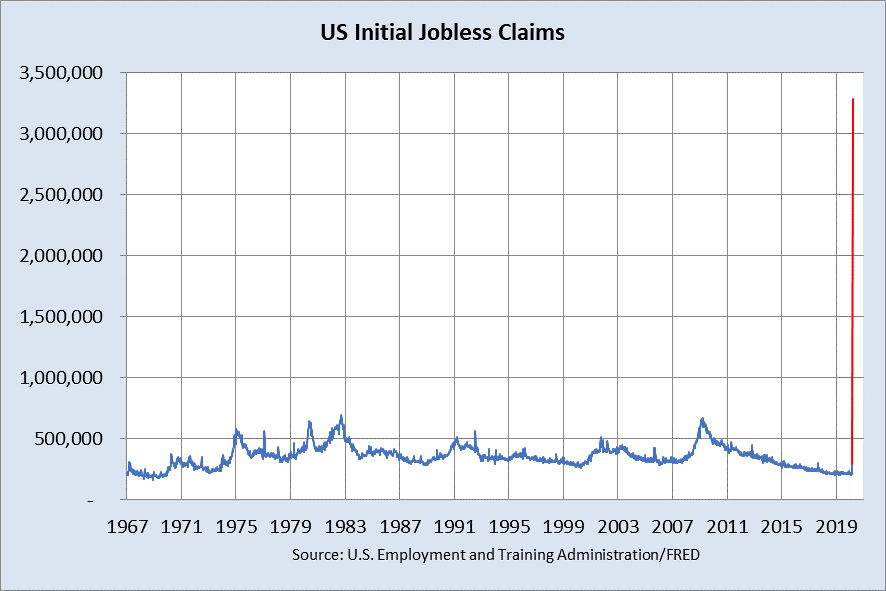 To put that 3.283 million figure into scale, it is equivalent to the entire population of Manchester (the UK's 3rd largest metropolitan area) losing their jobs in the same week. Alternatively, the figure shows that the last 18 months' worth of gains in nonfarm payrolls have been wiped out in just seven days.

Of course, the impact of the virus on labour markets is not unique to the US, and a similarly grim picture will be mirrored across the world. Nonetheless, the report shows the necessity of the unprecedented stimulus packages that have been put in place across the globe in order to try and ensure that the now inevitable recession doesn't develop into a longer-lasting depression.