The latest market highlights and our views on the key developments as risk appetite remains healthy for a second day running; services PMIs beat expectations; and sterling stumbles with markets jittery over the post-Brexit UK-EU relationship

Rumours of a vaccine and murmurings of a cure for the ongoing coronavirus outbreak were enough to spark another round of buying on Wednesday, with risk appetite buoyed for a second day running.

While these rumours are unconfirmed, and any such vaccine would likely come too late for the present outbreak, markets appear to be trading off emotion at present, hence the more upbeat sentiment.

In G10 FX, this manifested itself in gains for the risk-proxy Aussie dollar, which gained 0.25%; though the typically risk-sensitive Kiwi dollar failed to benefit, dipping 0.2% after lacklustre labour market figures.

Also facing headwinds were the Japanese yen and Swiss franc - both typical safe-havens. The yen shed 0.25%, while the Swissie lost 0.4%, the latter being a welcome sign for the SNB who may have been concerned about the franc's recent appreciation.

Yesterday's full scoreboard is below: 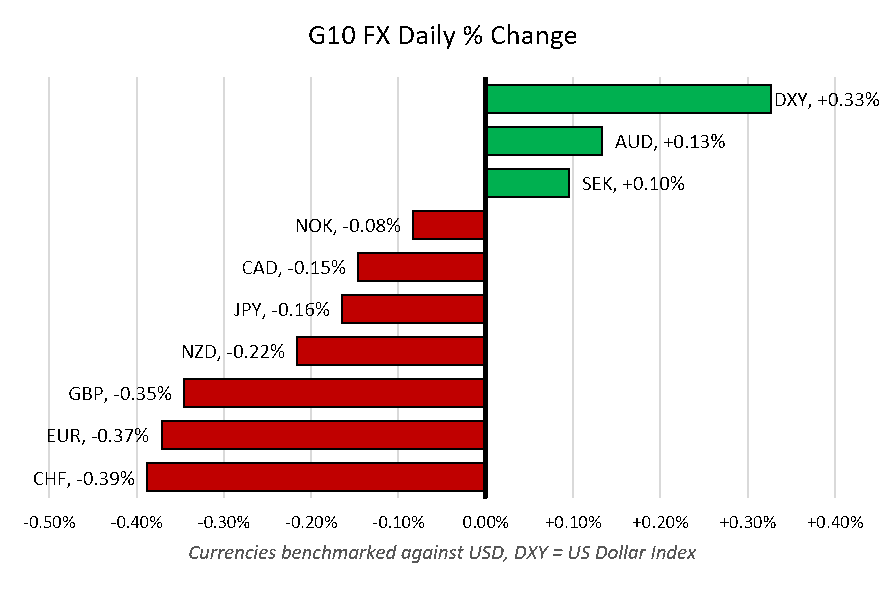 In Europe, the pan-continental Stoxx 600 ended the day 1.25% higher, with all bar one sector closing in positive territory, and the broader index ending the day at session highs. London's FTSE 100, however, was more of a laggard, closing with a gain of 0.6%.

Across the pond, the US benchmark S&P 500 also gained ground, closing 1.1% higher, at a fresh all-time high.

The gains for equities resulted in losses for bonds, with yields once again moving higher. Looking at Treasuries, the 10-year yield was 4bps higher, though most of the losses were confined to the long end of the curve. Technically, this is evidence of a bear steepener, with the the 2s10s spread now widening out to around 21bps.

Meanwhile, there were also gains for oil prices, after a recent torrid spell. Both global benchmark Brent and US WTI crude snapped 5 day losing streaks on Wednesday, gaining 2.6% and 2.3% respectively. The gains came as OPEC's joint technical committee meeting -- which was supposed to last two days -- was extended into a third amid reports that Russia were not yet on-board with deeper production cuts.

Five days into the post-Brexit world that is the transition period, and markets remain jittery about the future UK-EU relationship.

The latest evidence of said jitters came yesterday afternoon, when reports that the EU were considering a revamp of MiFID II, including walking away from concessions made to the UK when the Directive was drafted.

Now, I appreciate financial regulations may not be the most stimulating subject - however any changes to MiFID, specifically the right for UK based firms to 'passport' their services into the EU, are of great importance for the UK economy.

Post-Brexit, it would appear that the City's degree of access to the EU market will depend on UK-EU equivalence standards; yes, we're back to the 'level playing field' again.

Markets, therefore, have become concerned that the City may lose its unique access to European markets at the end of the transition period, something which would significantly dent the UK economy.

These concerns saw sterling quickly slide around 75 pips in afternoon trading, dipping below the key $1.30 handle in the process, and ending the day 0.35% lower. However, despite $1.30 being key psychological support, the important region to watch is just below.

Since the election, sterling has tested - and bounced from - a region of substantial support between $1.2940 and $1.2960, as the below chart shows. Should this support continue to hold, sterling remains a buy on dips; however, if cable breaks below this level, there is room for further downside. 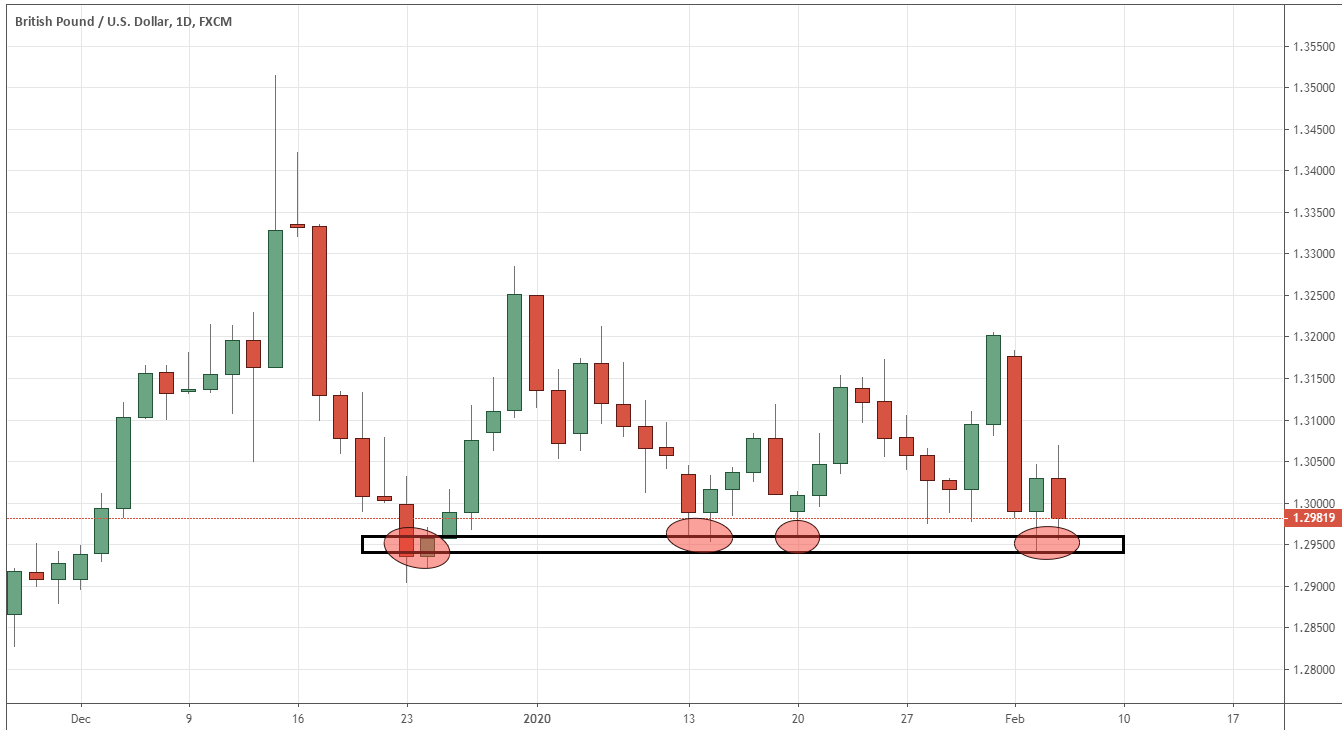 On the data front, Wednesday's highlight came in the form of the customary round of services PMI reports.

In the eurozone, final data for January pointed to a continued steady pace of expansion, with the index printing 52.5 - a modest upward revision to the flash estimate. This pushed the composite PMI - which measures output across the economy - to 51.3, a level which should see the ECB remain on autopilot, maintaining their ultra-loose policy stance. 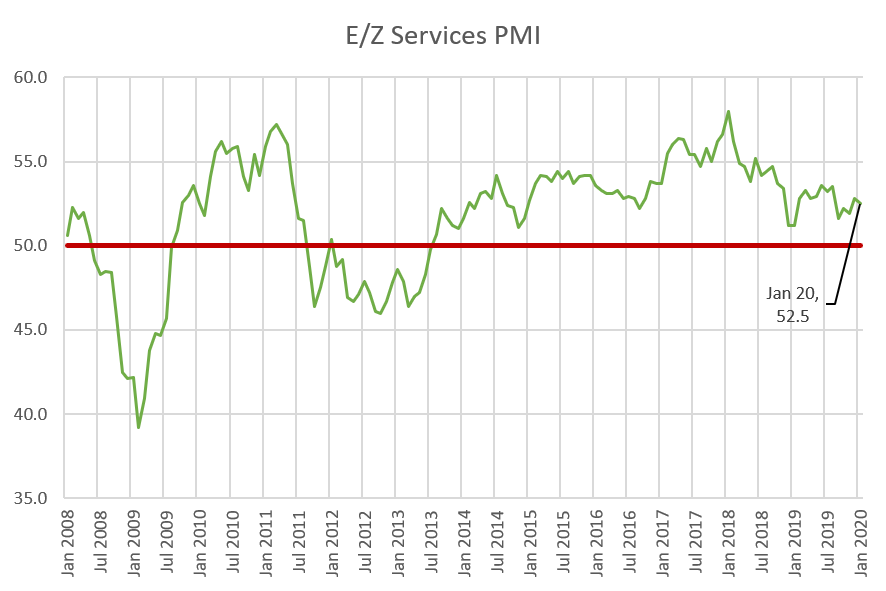 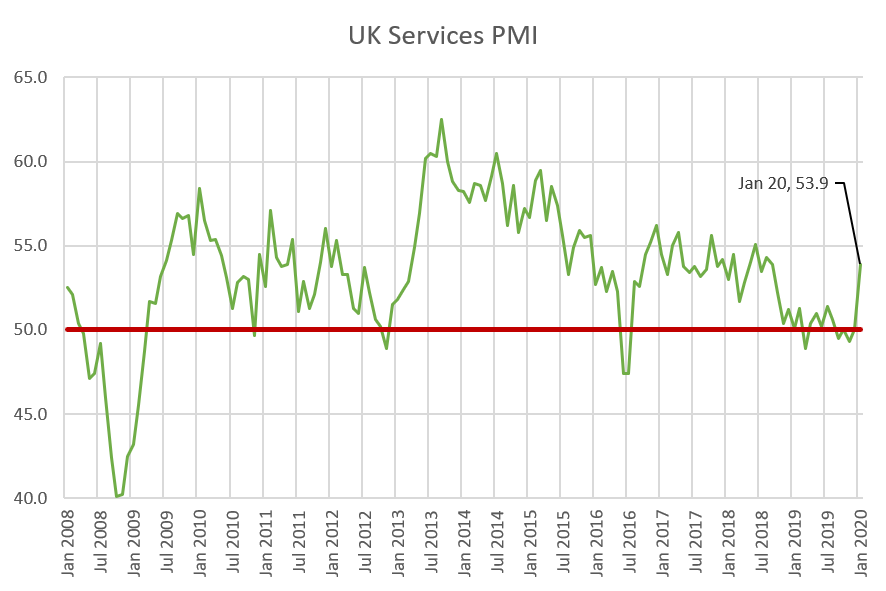 The strong PMI figure, which represents the fastest pace of expansion since September 2018, confirms the post-election bounce in sentiment, and somewhat vindicates the BoE's decision to leave policy unchanged last week. In fact, the PMI's bounce was the biggest 1-month jump in almost four years, showing a strong rebound in the UK economy as 2020 gets underway. 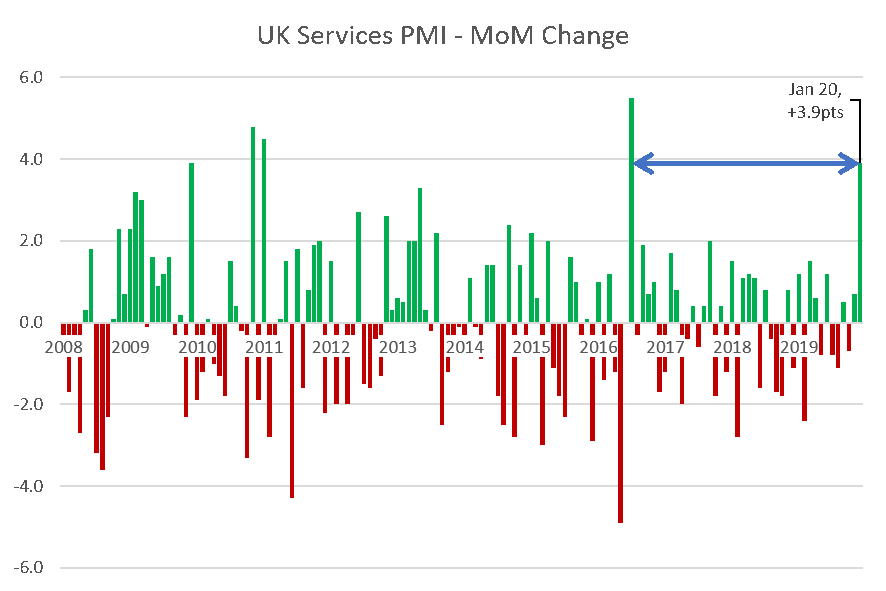 However, despite the strong PMI figure, the BoE will be looking for the improving 'soft' data to feed through into firmer 'hard' data - reports such as GDP and CPI - to vindicate their 'wait and see' policy stance. If this follow-through doesn't take place, rate cuts could once again become a possibility.

Across the pond, the ISM non-manufacturing index also beat expectations in January, reading 55.5 - the fastest pace of expansion since August. 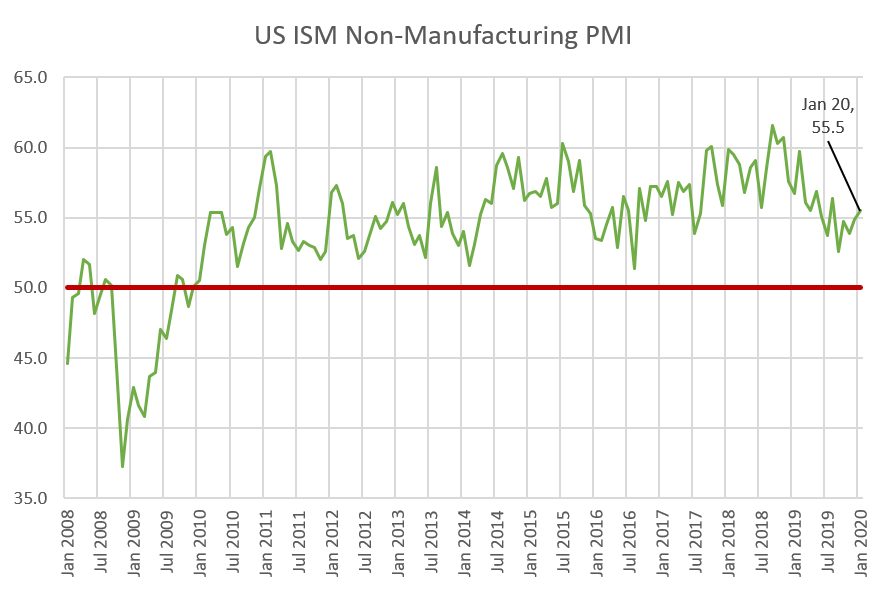 Despite the headline beat, the details of the report were more mixed. For example, while the new orders subcomponent increased (to 56.2 from 55.3), employment declined steeply (to 53.1 from 54.8) while prices paid were largely stagnant.

However, the US services sector continues to expand at a strong pace, helping to support the dollar. Against a basket of peers, the greenback ended the day 0.3% higher, chalking up a third straight daily gain, which took the dollar index (DXY) to a 9-week high.

Sticking with data releases, I must mention yesterday's blowout ADP employment change report, which pointed to the US economy adding a blockbuster 291,000 jobs last month - nearly double the expected figure and the highest print since May 2015. 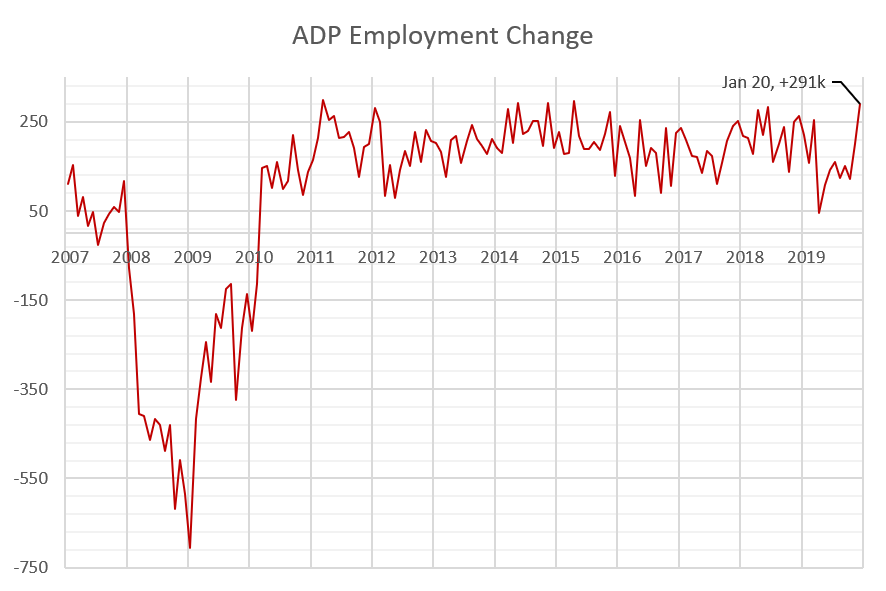 The ADP report is a semi-reliable leading indicator for Friday's official payrolls report, hence market expectations for the nonfarm payrolls number are now likely heightened. Should the ADP gain be repeated in Friday's labour market report, expect significant dollar upside - and, of course, a celebratory tweet from President Trump.

Today sees a relatively light calendar, with only a handful of notable events and releases;