The latest market highlights and our views on the key developments as the trading week gets off to a sluggish start with US desks closed for President's Day; labour market data begins this week's health-check on the UK economy; and the monthly ZEW sentiment surveys are eyed for any impact of the coronavirus outbreak

The trading week got off to a sluggish start on Monday, with the closure of US markets for the President's Day holiday significantly thinning liquidity and resulting in quieter than usual trading conditions.

As a result, and with yesterday raising relatively few talking points, now is an opportune time to take a look at a couple of broader issues investors are currently pondering.

The only notable data release of the last 24 hours of trading came on Sunday evening, in the shape of the first estimate of Japanese fourth quarter GDP.

The data pointed to a sharp slowdown in Japan's economy as 2019 drew to a close, with GDP contracting by 1.6% QoQ, and by 6.3% on an annualised basis. 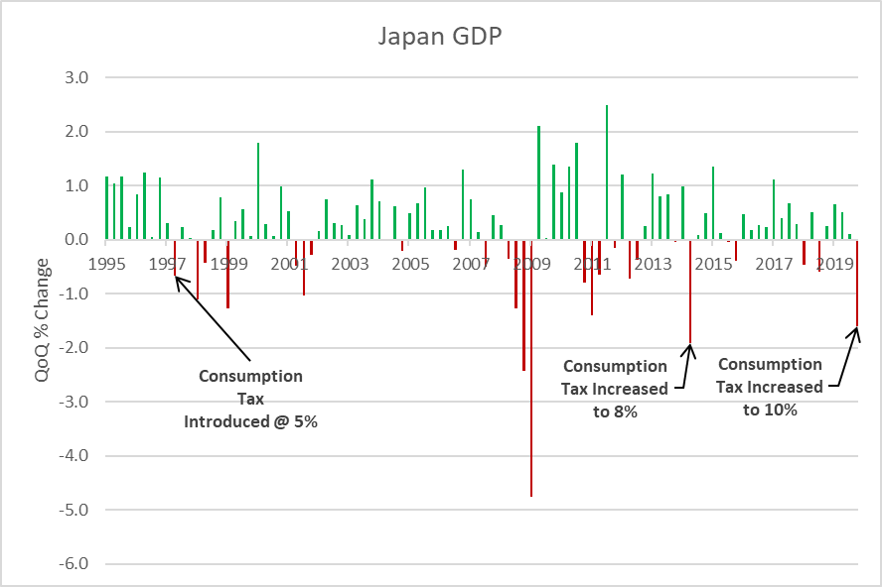 This sharp fall in output came largely as a result of a collapse in personal consumption, which declined by 11% on an annualised basis in Q4. 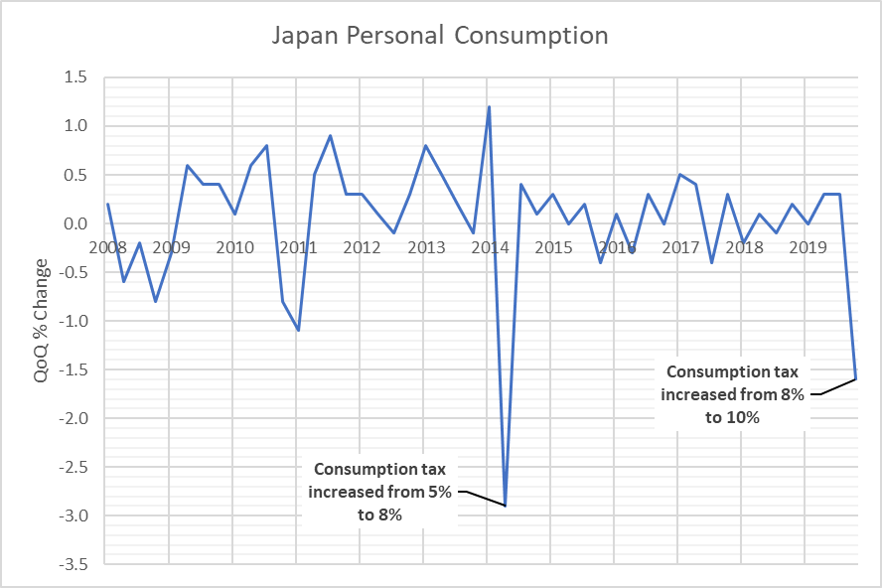 As the above chart shows, the dramatic decline in consumption was almost wholly self-inflicted, with October's consumption tax hike -- from 8% to 10% -- seeing consumers drastically tighten their belts; the same reaction seen when the tax was previously hiked in 2014.

While this slowdown in consumption would be bad enough on its own heading into Q1, the Japanese economy now has to contend with the ongoing coronavirus outbreak, which will likely have a detrimental impact on both the manufacturing and tourism sectors.

Headwinds facing the manufacturing sector as a result of the epidemic are well-documented, with the sharp decline in Chinese demand set to spill-over into the global supply chain.

However, the Japanese economy -- and the economies of other South-East Asia nations -- are particularly vulnerable to a virus-linked decline in visitor numbers. This has already been seen in preliminary data for Hong Kong, where visitor numbers are down by almost 98.5% YoY, as the below from Bloomberg illustrates. 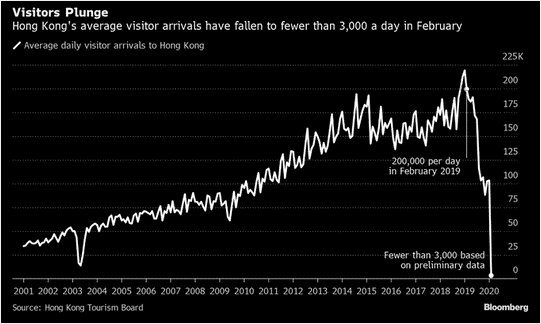 This slump in visitor numbers, which will likely be mirrored across the region, will do little to arrest the decline in consumer spending; particularly when the majority of big-spending Chinese tourists will be remining at home. Therefore, the Japanese economy is running the risk of entering technical recession in Q1, likely to result in growing calls for a policy response.

This response will, however, have to come from the fiscal side, with the BoJ's policy arsenal depleted after years of ultra-low rates, and large-scale bond-buying under the QQE programme. Whether further fiscal stimulus, in addition to the recent $120bln package unveiled by PM Abe, is delivered, remains to be seen.

The yen is, however, likely to shrug off these concerns, instead continuing to trade in line with shifts in risk appetite, maintaining a strong negative correlation with equity markets.

How Much Can Sunak Spend?

Meanwhile, here in the UK, all eyes remain on the March Budget -- though the planned 11th March date remains in a state of flux.

Markets have, since the replacement of former Chancellor Sajid Javid with Rishi Sunak, begun to price in a greater degree of fiscal stimulus being injected into the UK economy, however loosening the purse strings is not as simple as it would appear.

In the election campaign, the Conservative Party set out fiscal rules -- essentially constraints on spending levels -- that the government would be bound by should they be elected. These are as follows, with the key passage highlighted: 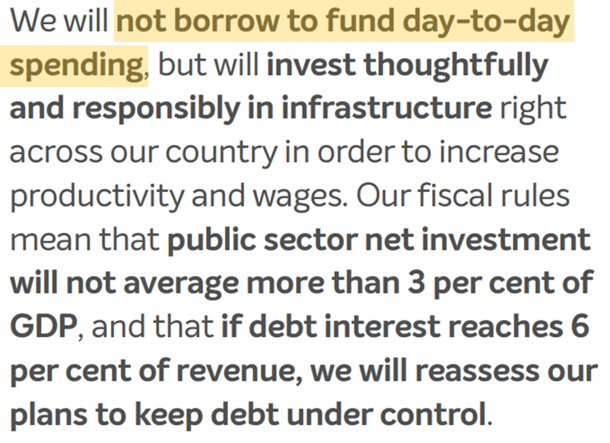 While this does not place any restrictions on infrastructure spending -- the government can build as many hospitals and high speed rail lines as they desire -- the current fiscal rules give little to no room for a reversal of austerity era cuts to public spending, particularly with the OBR already projecting a budget deficit for this fiscal year: 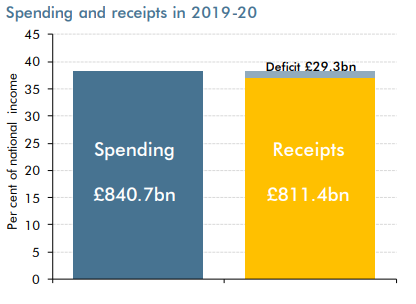 This could be tackled in one of two ways; either through tax increases, or through an increase in government borrowing.

On the former, the Conservative government is unlikely to want to increase taxes, particularly after the election 'triple lock' promise to not increase income tax, national insurance, or VAT for the duration of the Parliament.

Meanwhile, an increase in government borrowing to fund higher day-to-day spending (think healthcare, defence, education etc.) would be in breach of the self-imposed fiscal rules.

As a result, a significant degree of fiscal stimulus appears unlikely within the present constraints, which may well need to be torn up for the Conservatives to deliver their plan of 'levelling up' parts of the UK.

Should the degree of fiscal stimulus delivered in the Budget fail to live up to market expectations, sterling will likely face headwinds as markets price in the possibility of monetary policy easing to make up for any lack of increasing government spending.

The trading week properly gets underway today, with a couple of notable releases due, and the return of US desks from the long weekend likely to result in more volatile trading condtions.

The first of this week's major UK data releases is due this morning, in the form of the latest employment data.

Unemployment is expected to have held steady at a 45-year low of 3.8% in the three months to December, indicating that the labour market remains tight, though this tightness is still yet to follow through into significantly firmer wage growth. 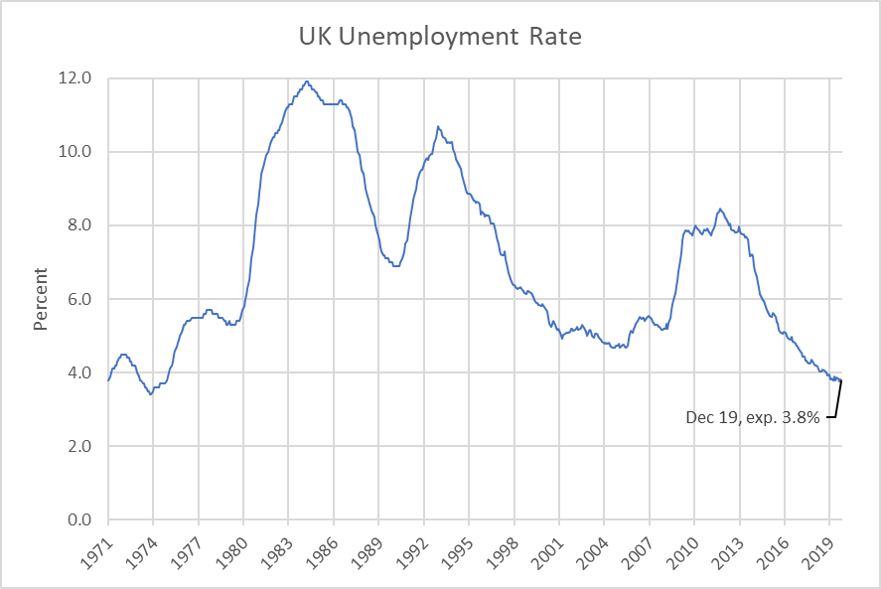 The pace of earnings growth is set to slow further in the period to December, with pay including bonuses expected to fall to a 2-year low of 3% on a YoY basis. Excluding bonuses, earnings are set to remain broadly similar to the previous reading at 3.3% YoY. It should, however, be noted that the lack of a significant pick-up in earnings is not a phenomenon unique to the UK, with sluggish earnings growth being seen in most other developed economies. 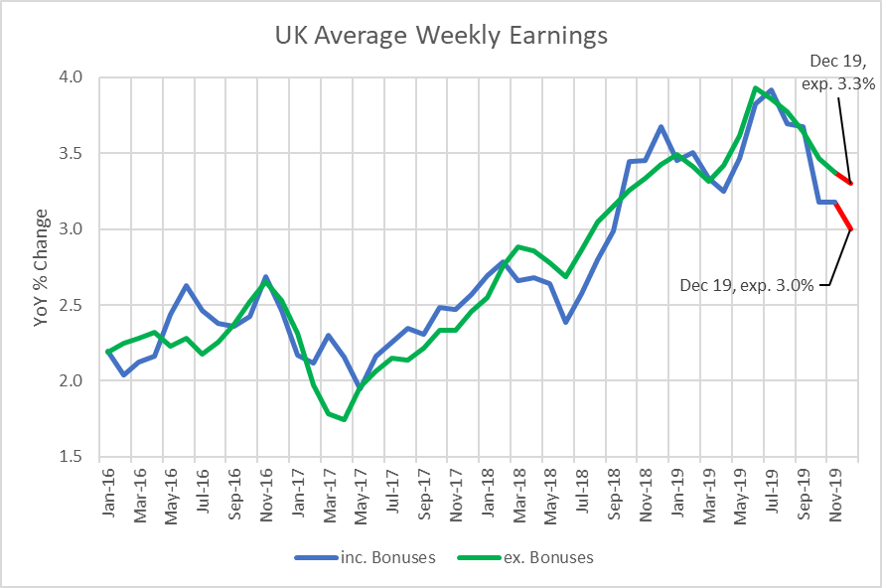 Overall, the employment report is likely to do little to alter the BoE's policy outlook, with policymakers remaining in 'wait and see' mode, assessing whether the post-election bounce in sentiment will follow through into improving 'hard' data in the months to come.

As such, this week's inflation (Weds), retail sales (Thurs), and PMI (Fri) reports will be closely watched as investors attempt to gauge the health of the economy at the start of 2020.

German economic sentiment is expected to pull back from a near 5-year high, with a print of 21.5 expected this month. The expected pullback will likely come as a result of the ongoing coronavirus outbreak, as well as political uncertainties after Chancellor Merkel's succession plans were thrown into disarray.

The virus outbreak, however, is not expected to significantly dampen sentiment in the eurozone as a whole, with the index expected to read a 3-year high of 30.0.

Nonetheless, the economic outlook remains far from rosy across the bloc, hence the ECB are set to maintain their ultra-loose policy stance for the foreseeable future.