Thursday saw markets remain cautiously optimistic on trade, while sterling remained well-supported, the Democrats moved a step closer to impeachment, and data gave little in the way of surprises.

Cautious optimism was the theme of the day on Thursday, with risk sentiment holding steady as markets remained relatively hopeful that a phase one Sino-US trade deal would be struck.

While headlines were relatively thin on the ground, barring the Chinese Commerce Ministry (MOFCOM) reiterating that they are in close contact with the US on trade, markets continued to digest yesterday's reports that a deal is close, despite recent heated rhetoric between the two sides.

Of course, tariff rollbacks remain the key to unlocking a path to a deal -- as hinted at by the Chinese MOFCOM -- hence market participants are likely to remain a tad apprehensive that no agreement has yet been reached on this point.

Nonetheless, despite the risk-positive mood, most of G10 FX remained rangebound, with neither the antipodeans, or the safe havens of the Japanese yen and Swiss franc, experiencing any significant volatility.

Away from trade, markets continued to price in a Conservative majority on Thursday, resulting in the pound extending recent gains. Despite a lack of major headlines yesterday, or any fresh opinion polling, market have become increasingly confident that Boris Johnson will be returned as Prime Minister with a healthy majority in a weeks' time.

It would appear that a number of Brexit Party MEPs are thinking along the same lines, with 4 of Nigel Farage's MEPs resigning the whip to campaign for the electorate to vote Conservative to 'get Brexit done'. Getting Brexit done, of course, featured heavily in the Tories' plan for their first 100 days in office, along with confirmation that a budget would be announced in February.

Having rumbled on for some time now, House Democrats decided to take the impeachment inquiry into President Trump a step further on Thursday. House Speaker Nancy Pelosi announcing that the House will draft articles of impeachment having found that Trump engaged in an abuse of power and partook in actions violating the constitution.

However, despite the inquiry moving forward, impeachment remains a distant possibility. Even if the impeachment articles were drafted and passed a House vote, it remains highly unlikely that the Republican-held Senate would vote to impeach their own President.

As a result, the dollar barely moved a tick on the headlines, though did grind steadily lower throughout the day. The greenback ended Thursday 0.2% lower against a basket of peers, with the dollar index (DXY) now having broken below its 200-day moving average for the first time since November.

As always, the first Friday of the month means only one thing for financial markets - jobs day. The monthly US labour market report will be released this afternoon, recording the employment situation in November. Headline nonfarm payrolls are expected to show an increase in hiring compared to October, with a consensus estimate for the US economy to have added 180,000 jobs last month -- broadly in line with the 3-month average of 176,000. 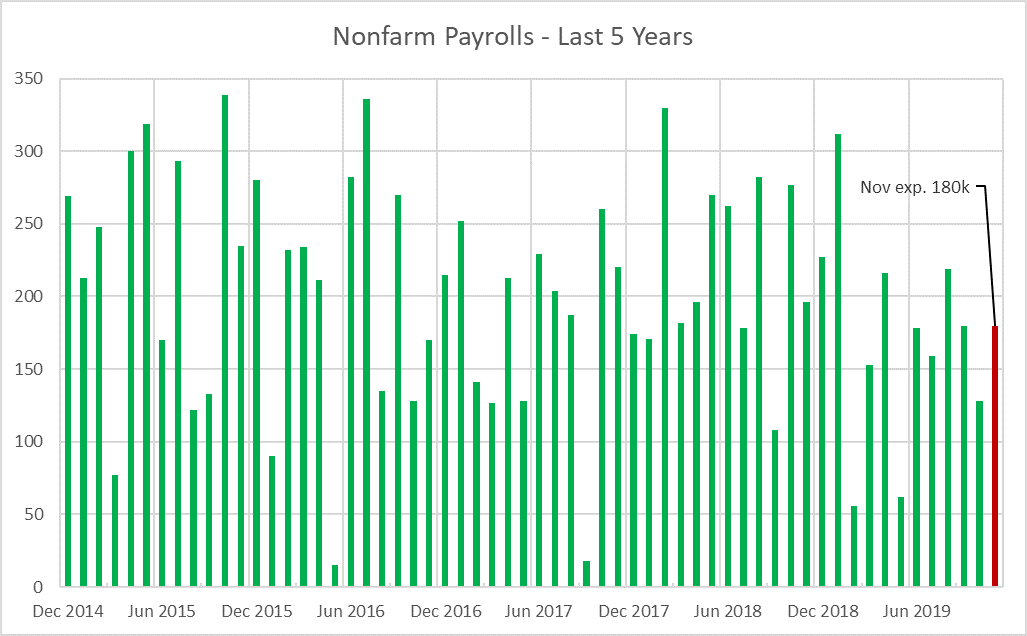 Indicators leading up to the payrolls report have painted a mixed picture; the employment component of the ISM manufacturing index and the ADP report have been softer than expected, while the ISM non-manufacturing index and latest initial jobless claims numbers have been better than expected. However, it is important to note that the ADP figure does not include the return of 50,000 striking GM workers, which will be included in the official payrolls data. As always, in addition to October's jobs number, revisions to the previous two months' data will be closely watched in case of any surprises.

Meanwhile, as well as the headline payrolls figure, market participants will closely examine the unemployment rate and earnings data to gauge the broader health of the jobs market. Unemployment is set to tick remain at 3.6%, while average hourly earnings are expected to increase at 3.0% YoY, unchanged from October.

Market participants will be eyeing a 'goldilocks' report -- i.e. one where headline payrolls are solid, unemployment remains low, and earnings are increasing at a healthy clip. Such a report would likely see the FOMC leave monetary policy on hold, maintaining a loose policy stance, providing support to risk assets in the coming months.

A report in line with the above expectations, as well as showing a healthy pace of wage growth, should provide solid support to the Canadian dollar, and would give little reason for the BoC to alter their present, neutral policy stance.

With less than a week to go until polling day, election developments will once again remain the primary driver of sterling.

Today sees the final major TV event of the campaign, with the two candidates to be prime minister -- Boris Johnson and Jeremy Corbyn -- going head to head in a BBC debate this evening. With polls continuing to point to a healthy, roughly 10-point Tory lead, the debate appears to be Labour leader Jeremy Corbyn's last chance saloon to try and steer the campaign towards the Labour party.

Should Corbyn fail to land any significant blows, or fail to significantly impact the polls, sterling will likely be well-supported at next week's market open, with the election then being seen firmly as Johnson's to lose.