The latest market highlights and our views on the key developments as the Fed's open-ended QE package fails to lift sentiment; responses to the coronavirus pandemic continue; and the latest flash PMI surveys are eyed today.

To infinity and beyond!

No, that's not me quoting Buzz Lightyear; that was the message from the Federal Reserve on Monday who, just over a week after announcing a 100bps rate cut and relaunching quantitative easing, expanded their bond buying programme.

The FOMC voted unanimously to purchase an unlimited amount of Treasuries and mortgage-backed securities (MBS) for an unlimited period of time to 'ensure smooth market functioning and transmission of monetary policy'.

The Fed's balance sheet already stands at a record high $4.6tln, and this will only increase -- almost certainly quickly -- as a result of yesterday's announcement.

Said asset purchases will initially begin with the purchase of $75bln in Treasuries and $50bln in MBS each day this week. For context, that is roughly the amount of securities the Fed were buying on a monthly basis during the financial crisis, showing just how significant and unprecedented the size and scope of this package is.

That wasn't all the Fed announced yesterday, however, as the 'kitchen sink' approach to policymaking continued with a host of other measures:

While the Fed now appear to be talking to us in acronyms when it comes to their stimulus programmes (MMLF, TALF, QE, CPFF etc.) one thing is for sure; policymakers -- at least on the monetary side -- are desperate to ensure that the public health crisis that is the coronavirus doesn't precipitate into a severe financial crisis.

Briefly, it appeared that the measures may work.

The increased liquidity that the policy package will provide resulted in some of the upward pressure on the dollar relenting a tad, and saw the greenback close in the red against a basket of peers.

Yields also fell in the aftermath of the Fed's decision, with the 10-year Treasury yield falling as much as 18bps to 0.7%.

It is, however, far too early to tell whether the monetary policy package will be effective, though it should definitely be reassuring for market participants that the Fed are acting in a swift, sweeping, significant manner to try and insulate the economy from as much of a coronavirus-related shock as possible.

Speaking of the coronavirus, investors continued to closely monitor the spread of the pandemic on Monday, with confirmed cases globally now numbering greater than 350,000.

However, in a glimmer of good news, there have now been almost 100,000 people confirmed to have recovered from the virus; while the number of confirmed cases is now likely to increase at a faster rate due to greater testing, not necessarily due to increased virality of COVID-19. 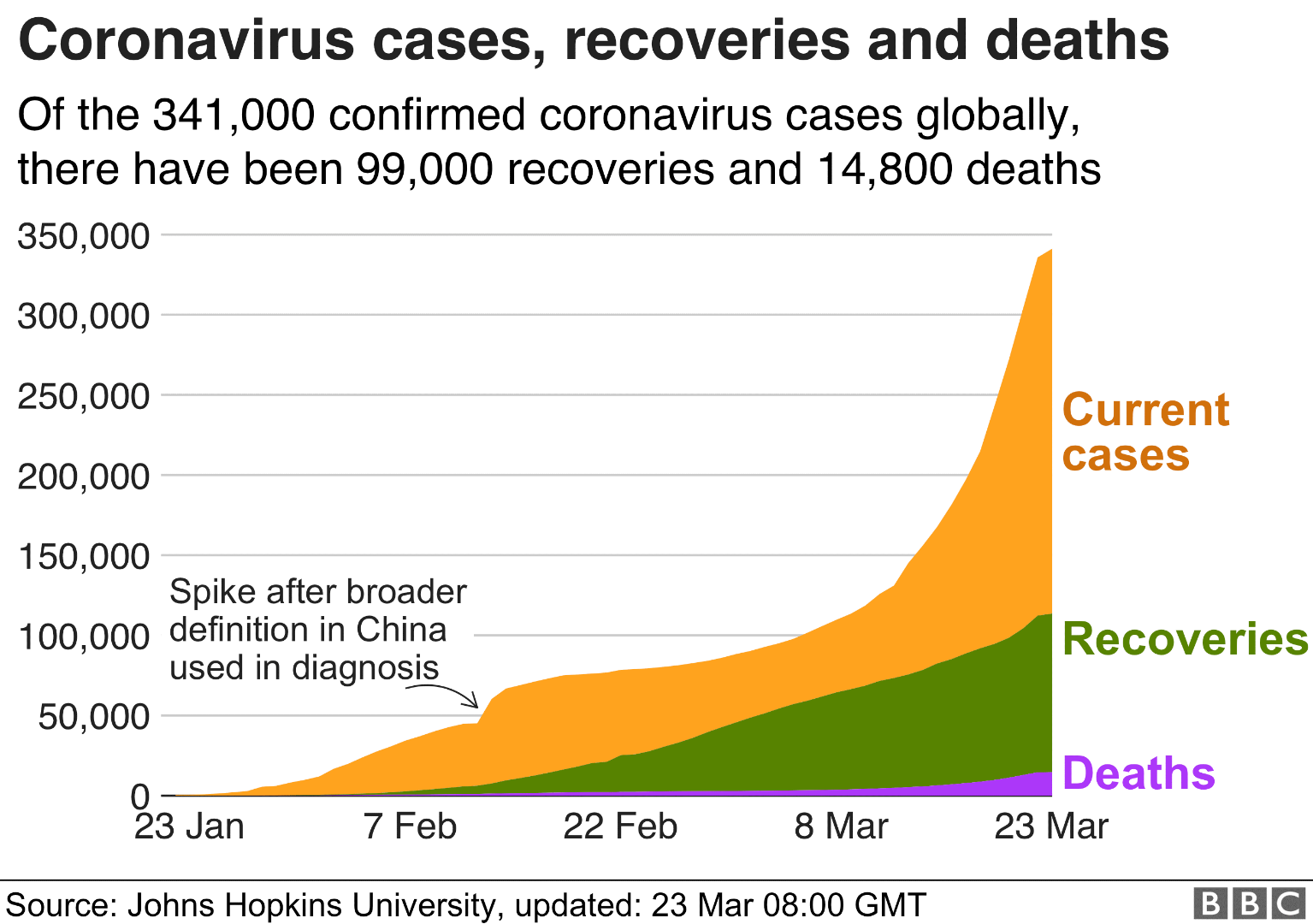 Government responses to the pandemic also continue to flood in:

Turning to markets, the ongoing spread of the coronavirus and continuing concerns over the economic impact of various, stringent, lockdown measures around the world continued to roil risk appetite as a fresh week got underway.

In Europe, all major bourses ended the day in the red, with oil and gas stocks the only sector to end the day in positive territory. 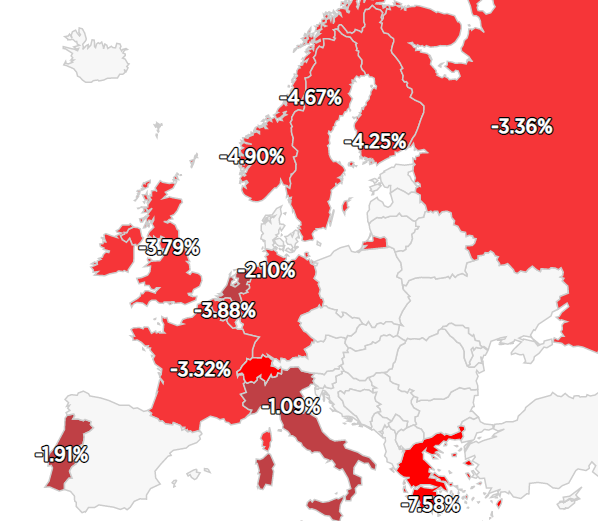 Across the pond, after their worst week since 2008, US equities continued to lose ground as a fresh trading week got underway. The benchmark S&P 500 was almost 3% lower at the close, as investors ignored the Fed's stimulus package and instead focused on the Senate's inability to pass a coronavirus stimulus Bill.

Most sectors ended the day in negative territory, with just a few specks of green on the heatmap. 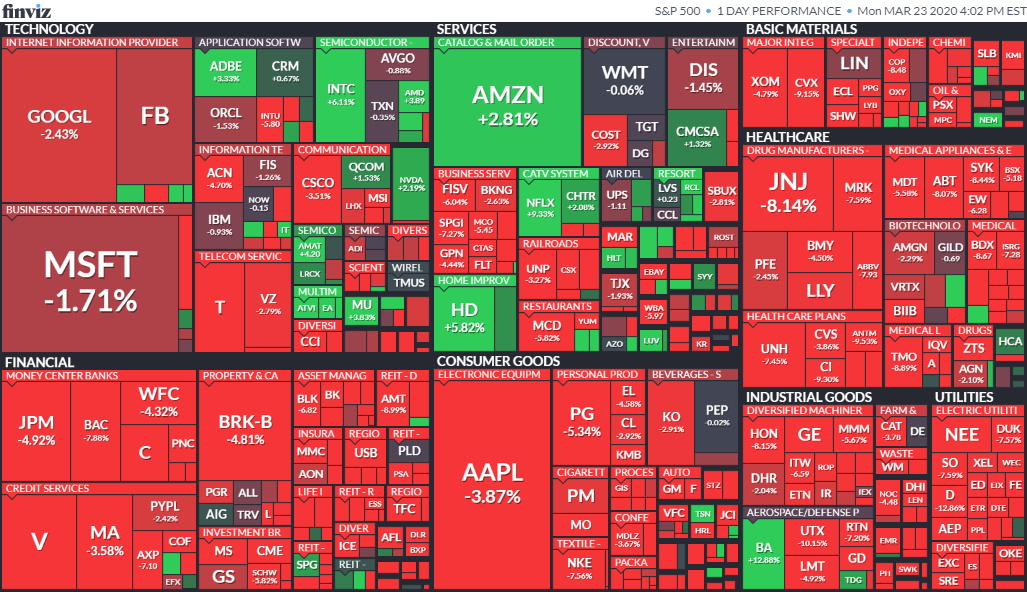 Finally, both gold and oil prices bounced yesterday in reaction to the Fed's stimulus package.

Despite ongoing concerns over both oversupply and evaporating demand, WTI crude settled almost 3% higher, as investors were somewhat reassured by the monetary policy measures. Global benchmark Brent was 0.6% higher at the close.