The latest market highlights and our views on the key developments as sterling pares all of its post-election advance, the latest UK employment figures paint a mixed picture, and inflation releases come into focus today

The Boris Bounce Fizzles Out

Well, that was short-lived.

I am, of course, talking about the post-election sterling rally, the last of which fizzled out yesterday - just 3 trading days since polling day. Perhaps my comment yesterday that Brexit risks have receded jinxed it?

The final leg lower of the pound's post-polling day round trip came as a result of the latest Brexit developments, with reports that PM Johnson plans to amend the Withdrawal Agreement Bill  (WAB) in order to make it unlawful for the post-Brexit transition period to be extended - either by the government or by Parliament.

With the Tories 80-seat Commons majority meaning the WAB is, barring a strange twist of fate, certain to pass, this would leave just 11 months for the UK and EU to negotiate a free trade agreement in order to prevent trade reverting to WTO terms.

Yes, that's right, concerns over a no-deal Brexit are back with a vengeance.

The commitment not to extend the transition period, however, should not come as something new to market participants, with it being explicitly mentioned, and even highlighted, in the Tory manifesto. Nonetheless, yesterday's announcements sends a strong signal of intent to both the EU and Eurosceptic Tory MPs and voters that PM Johnson is serious about 'getting Brexit done' and having a trade deal in place by December 2020.

It is, however, important to note that, despite making an extension unlawful via the WAB, Johnson could pass a one-line bill amending the legislation at a later date if he so desired.

Nonetheless, the return of concerns over a fresh Brexit cliff-edge exerted significant pressure on sterling, which has now pared all of its post-election gains. The pound ended the day around 1.5% lower against both the dollar and euro, its biggest 1-day decline since November 2018, as investors somewhat repriced their outlook for the Brexit process and became increasingly concerned about the possibility of a WTO-terms departure at the tail end of next year.

Sticking with the UK, the economic health-check continued on Tuesday with the release of the latest employment data, which was a bit of a mixed bag.

The main positive of the data was the unemployment rate, which fell back to 3.8% in the 3 months to October, equalling the lowest jobless rate since 1975, and providing further evidence that the UK economy is at, or close to, full employment. 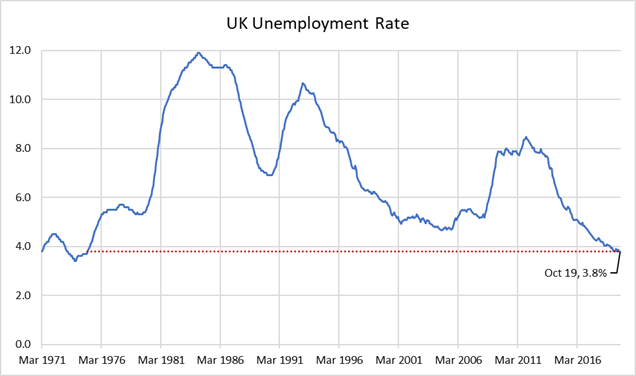 The full employment, however, isn't translating into a faster pace of wage growth, with earnings including bonuses increasing at just 3.2% YoY in the 3 months to October, the slowest pace in just over a year. Excluding bonuses, however, wages remained at 3.5% YoY, a healthy pace. 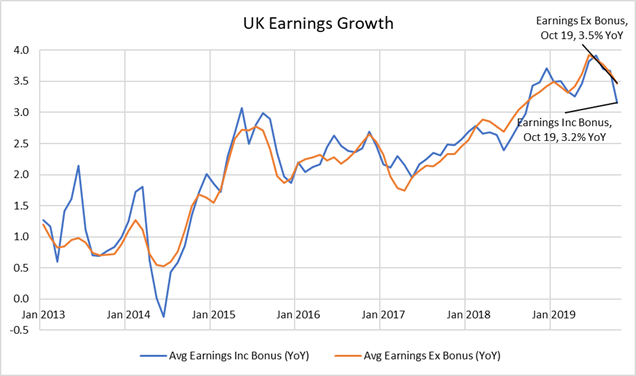 While the rather mixed pace of earnings growth is a little concerning, the situation is not unique to the UK, with many other developed economies - including the US and eurozone - seeing historically low unemployment fail to result in significantly faster wage growth.

Nonetheless, the report is likely to change little for the Bank of England, which should keep policy on hold this Thursday. However, the labour market will be closely watched in the coming months, with ongoing political and Brexit uncertainties set to keep put a dampener on businesses' appetite for hiring.

Meanwhile, Tuesday also saw a host of second-tier releases from the US, all of which were above expectations, helping to push the dollar to a gain of around 0.2% against a basket of peers.

Today is all about inflation, with the latest CPI figures due from the UK, eurozone and Canada throughout the day.

From the UK, headline inflation is expected to have increased at the slowest pace in 3 years last month, with a fall to 1.4% YoY expected. However, a significant reason for this fall is the recent lowering of the energy price cap, hence the BoE are likely to look through this transient blip in the pace of price increases. Reinforcing this view is the core inflation measure - which excludes both food and energy prices - which should remain unchanged at 1.7% YoY.

As a result of the resilient core reading, the inflation release will likely have little impact on the BoE's policy outlook, or on the pound, which will remain driven by political developments.

Across the Channel, November's final inflation figures for the eurozone are expected to confirm that CPI increased by 1% YoY last month, with the core measure reading 1.3% YoY. Both measures are expected to be unrevised from the flash estimate, and both are also set to provide further evidence of the significant amount of work that the ECB needs to do to return inflation to its 2% goal.

The final inflation release comes this afternoon from Canada, where both headline and core CPI measures are expected to remain close to the BoC's 2% target. Headline CPI is expected to have increased at 2.2% YoY last month, with core CPI expected at 1.9% YoY.

Finally, today's central bank speaking calendar is once again well populated, with ECB President Lagarde's remarks this morning the highlight. If Lagarde makes any comments on policy, expect them to take the form of a continued push for fiscal stimulus from eurozone governments.

Remarks are also due today from Fed Board Member Brainard, dovish Fed voter Evans, and ECB Governing Council Member Coeuré, who leaves the Bank at the end of the month