The latest market highlights and our views on the key developments as the pound and euro gain on firmer PMI surveys; Middle East geopolitical concerns linger; eurozone inflation is expected to heat up; and key US ISM PMI figures are eyed today

The first full trading week of 2019 got underway on Monday with the pound and euro outperforming after better than expected PMI figures, though lingering geopolitical concerns remain resulting in shaky risk sentiment.

Signs of stabilisation in both the eurozone and UK economies boosted the respective currencies on Monday, with investors becoming more hopeful that recent economic woes may be drawing to a close.

In the eurozone, December's final services PMI ticked up to 52.8, representing the fastest pace of expansion since August, and sitting almost 1 whole index point above November's print. Growth in the sector was supported by the first increase in new work in four months, a positive leading indicator for the sector in the coming months.

Meanwhile, the composite PMI gauge - which measures output across the economy - increased to 50.9, also the fastest pace of expansion since August, and pulling away from the 50.0 marker between expansion and contraction. However, it is important to note that the increase in the composite gauge was solely down to a faster pace of expansion in the services sector, with manufacturing activity having contracted for an 11th straight month in December. Thus, the eurozone economy is by no means out of the woods yet.

Nonetheless, the data is a positive for both investors and the ECB, with signs that the eurozone economy may be stabilising, albeit at a subdued pace of expansion. This resulted in gains for the common currency, which ended the day around 0.4% higher against the dollar, closing in on the $1.12 handle.

On this side of the channel, there were also positive signs for the UK economy.

Final services PMI figures for December printed better than expected, at 50.0. While this shows that activity in the sector stagnated as 2019 drew to a close, it is a significant upward revision from the concerning 49.0 flash estimate. 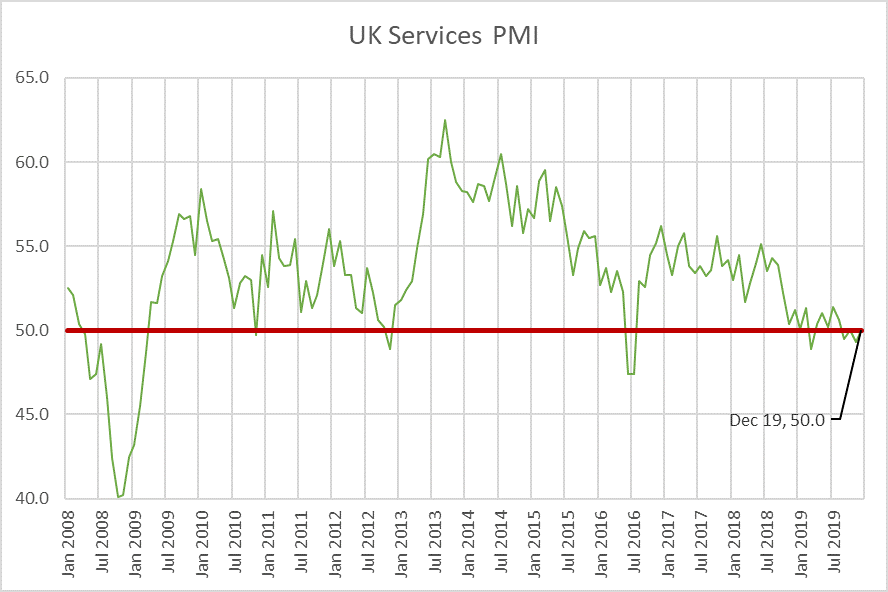 The uptick in the services PMI was driven largely by a rebound in new work - with new orders hitting a 6-month high last month - along with a significant reduction in the degree of political uncertainty. The better than expected services figure pushed also pushed the composite PMI higher, to 49.3, unchanged from November, and evidence of the economy stabilising. The upward trend in the PMI surveys can be expected to continue in the coming months, with political uncertainties decreasing and an increase in new orders boding well for the coming months.

The better than expected surveys soothed some investors' fears over an economic slowdown, and saw market participants rollback their bets on the Bank of England providing additional policy accommodation. As a result, sterling pushed higher, adding 0.6% against the dollar, and 0.5% against the euro.

Away from data, it was geopolitical developments that remained the key driver of risk sentiment on Monday, with attention continuing to focus on ongoing developments in the Middle East.

Tensions in the region have risen significantly over the past week, beginning with protests outside the US Embassy in Baghdad, and escalating further after the US killing of Qasam Soleimani.

Soleimani was Commander of the IRGC's Quds force - responsible for clandestine operations - and was seen by many observers as the second most powerful man in Iran. His killing has resulted in Iran promising retaliatory action, leaving market participants and those in the region bracing for such an instance.

The below graphic from the Financial Times provides a good overview of the region, relations between the nations involved, and the location of Iranian-backed regional forces who may perpetrate such a retaliatory attack. 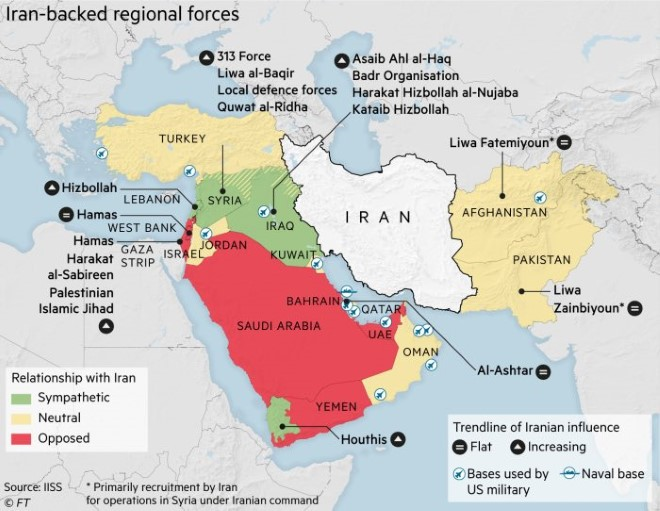 For markets, the developments have seen a rotation into safe-havens, resulting in bids for the dollar and yen, along with a surge in gold prices, which hit a 7-year high in early Monday trading. Oil prices also saw a surge higher, with Brent breaking above $70bbl, on fears of a potential supply disruption. Prices have, however, now returned to their pre-attack levels.

With little in the way of fresh developments on Monday, risk appetite was shaky, with investors cautious about the fluid nature of the situation. The dollar ended the day 0.1% lower, while the yen shed 0.3%. Treasury yields were also marginally higher across the curve, indicative of lesser demand for bonds.

Over the coming days, developments in the Middle East will remain the primary driver of risk appetite, with Europe's calls for a de-escalation of tensions seemingly falling on deaf ears in the US and Iran at present.

Today's data highlight comes from the US, in the form of the latest ISM non-manufacturing PMI survey.

After Friday's disappointment in the ISM's manufacturing gauge - falling to its lowest level since 2009 - markets will be on high alert for any potential spill-over effects into other areas of the economy.

Expectations are for the non-manufacturing index to rebound from November's disappointment, with a consensus estimate for a print of 54.5 - solidly above the 50.0 break-even mark, and representative of a solid pace of expansion in the services sector.

However, after last week's miss, and bearing in mind the continued slowdown in the global economy, a further downside surprise cannot be ruled out. Such a surprise would likely exert significant downward pressure on the dollar, and place an even greater burden on the consumer to prolong the present economic expansion.

Meanwhile, today's other data highlight comes in the form of December's flash inflation data from the eurozone.

The pace of price increases is expected to have increased sharply as 2019 drew to a close, with headline CPI expected at 1.3% YoY, a level which would be the highest inflation rate in seven months.

Core inflation, which strips out the volatile elements of food and energy prices, is also expected at 1.3% YoY, unchanged from November's level, indicative of underlying inflationary pressures beginning to increase.

However, both inflation measures are set to remain well short of the ECB's 2% target, meaning that there is still no end in sight to the ECB's ultra-accommodative policy stance. Policymakers continue to require assistance from more expansive fiscal policies, with the monetary policy arsenal largely exhausted, however this appears unlikely to be forthcoming in the near-term.

In the UK, political developments are once again set to come to the fore, with Parliament returning from recess today.

The return of MPs to the Commons will see Brexit remain the main centre of attention, with the Withdrawal Agreement Bill (WAB) - the legislation which ratifies the UK-EU exit deal - set to complete its Commons stages over the coming three days.

However, this will be little more than a formality, with the 80-seat Conservative majority meaning that the Bill is - barring a strange twist of fate - certain to pass, and that the days of late-night, knife-edge Parliamentary votes are now behind us.

Of more interest for the pound, which has wholly priced in that Brexit will be taking place on 31st January, will be any word on trade talks and the post-Brexit UK-EU relationship.