The latest market highlights and our views on the key developments as the recent risk rally takes a breather; sterling slides on UK-EU trade jitters; and the monthly US labour market report comes into focus

Markets paused for breath on Thursday - though sentiment remained steady as investors took stock of the recent impressive risk rally; as concerns over the coronavirus outbreak continued to recede, giving way to increased optimism that the global economy would be able to withstand any virus-related dip in demand.

In G10 FX, this resulted in relatively tepid trading conditions, with most majors little changed on the day. The US dollar, however, was leader of the pack, adding around 0.25% against a basket of peers, briefly touching its strongest levels since mid-October. The phrase 'buy dollars, wear diamonds' springs to mind.

Elsewhere, the dollar's rally resulted in a weaker euro, with the common currency shedding just under 0.3% on the day. The euro's decline saw the single currency break below the YTD- and December-lows, with EUR/USD hitting its lowest level since last October, below the $1.10 handle.

Safe-haven FX also faced headwinds, largely as a result of the still-healthy risk appetite. Both the Japanese yen and Swiss franc shed around 0.2%, the latter hitting a 1-week low against the greenback.

Both antipodeans also lost a similar amount of ground, with the Aussie dollar remaining perilously close to a near-decade low against its US counterpart. 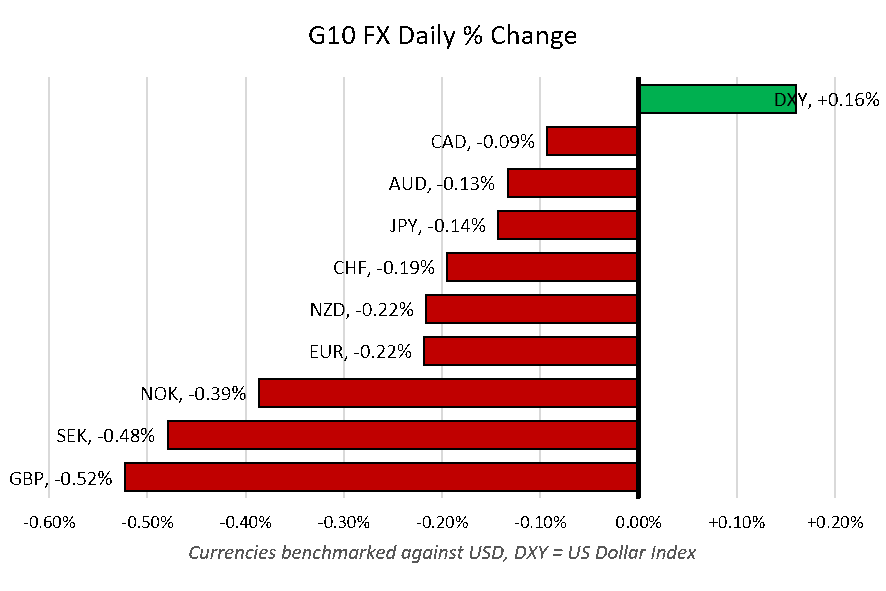 In other asset classes, equity markets continued to grind higher, buoyed by the aforementioned hopes that the global economy would be able to withstand the sharp drop in Chinese demand.

In Europe, the pan-continental Stoxx 600 ended the day 0.5% higher; however most of these gains came in a pop at the open, with the index trading sideways for the majority of the day.

Across the pond, all major US indices ended the day at fresh record highs, extending their winning run into a fourth day. The benchmark S&P 500 closed 0.33% higher.

In the bond market, Treasury yields were largely unchanged, with 10-year yields declining by less than one basis point.

Meanwhile, oil prices were more mixed, as markets continued to digest rumours of additional OPEC+ supply cuts in reaction to the coronavirus outbreak. Said cuts, which could amount to an extra 600,000 barrels per day, require the agreement of all member states, with Russia said to be a sticking point. Global benchmark Brent ended the day 0.6% lower, while US WTI crude added 0.4%.

Yesterday's reports that the City's access to the bloc's single market may be threatened after the transition period continued to pressure the pound on Thursday, with the quid ending the day 0.5% lower against the dollar.

As the below chart illustrates, cable (GBP/USD) has now broken below the key $1.2940-60 support region that has held since the election, hitting a fresh year-to-date low of $1.2921 yesterday. The pair's decline was, however, arrested by the 38.2% fibonacci retracement of the September - December rally; a strong technical support level, illustrated in blue below. 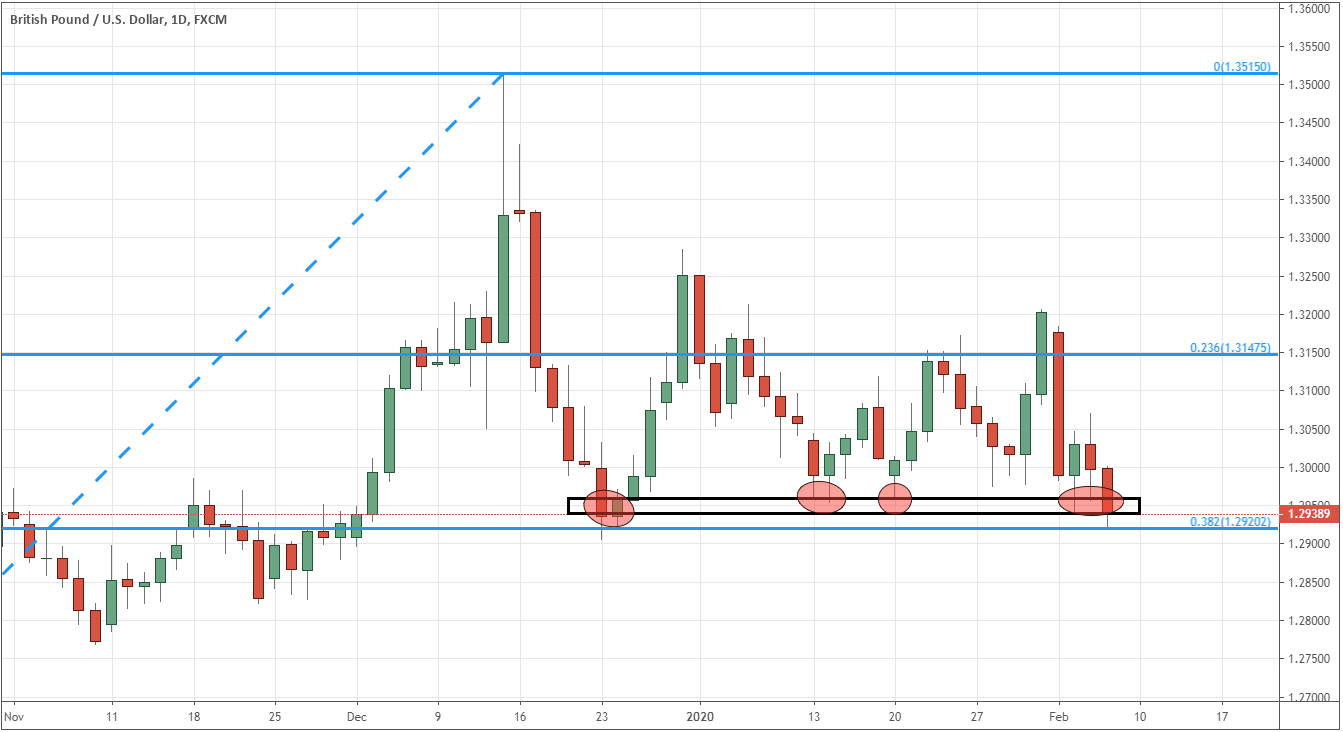 The pound also lost ground against the euro, ending the day 0.25% lower, as a lack of major data releases from either side of the Channel left investors pondering over the upcoming UK-EU trade discussions, which begin in March.

Across the pond, Thursday's only notable release was last week's initial jobless claims report, the final piece in the data jigsaw ahead of this lunchtime's labour market report.

Weekly claims fell to 202,000 last week, the lowest level since April 2019, a further sign that the US labour market remains in good nick, though the release had little - if any - noticeable impact on the dollar. 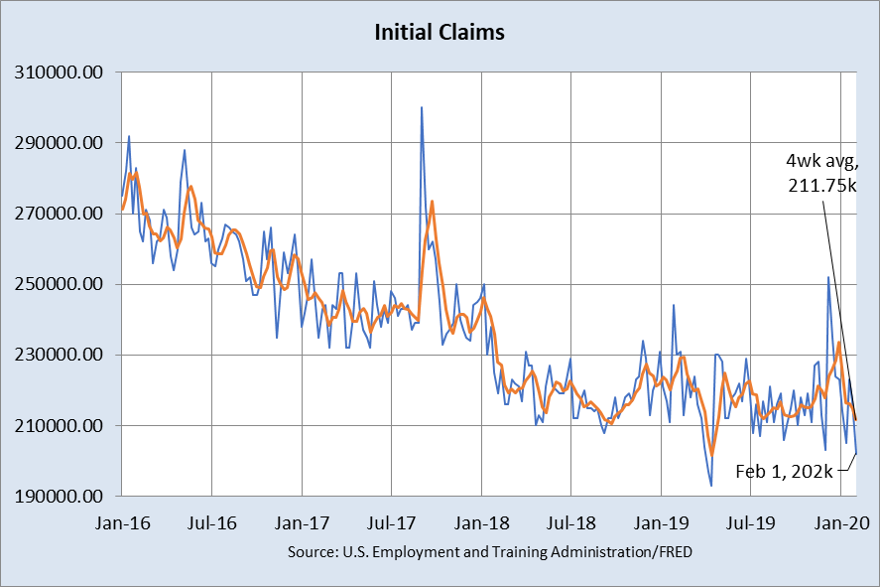 Across the pond, Thursday's only notable release was last week's initial jobless claims report, the final piece in the data jigsaw ahead of this lunchtime's labour market report.

Weekly claims fell to 202,000 last week, the lowest level since April 2019, a further sign that the US labour market remains in good nick, though the release had little - if any - noticeable impact on the dollar. 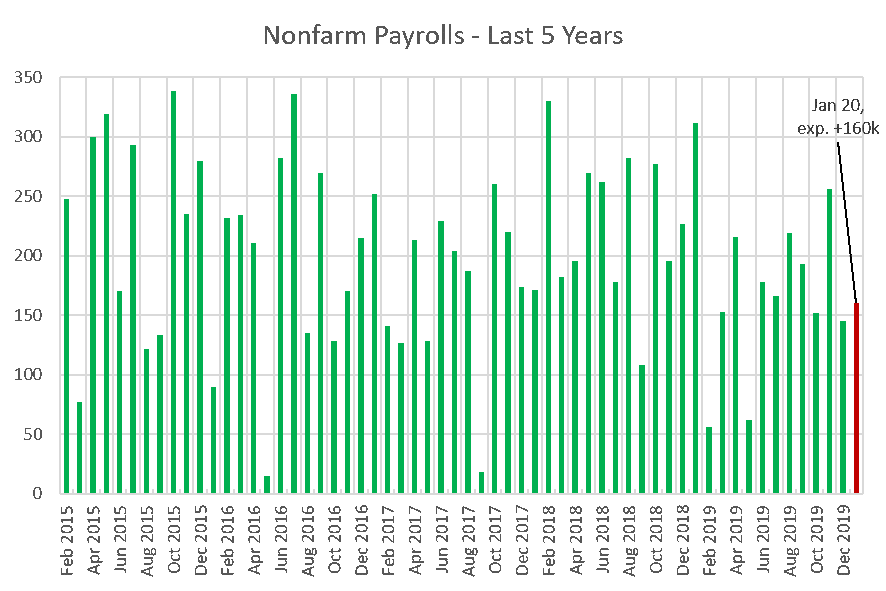 Leading indicators ahead of the payrolls report point to the balance of risks being tilted to the upside. January's ADP employment figure smashed expectations, indicating the addition of 291,000 jobs last month, while the employment subcomponents of the recent ISM surveys send positive signals for both the manufacturing and non-manufacturing sectors.

However, perhaps the best leading indicator of all will prove to be a tweet sent by President Trump - who gets advance sight of the numbers - earlier this week, declaring "very good economic news. JOBS, JOBS, JOBS!". Only time will tell.

Of course, in addition to January's payrolls figure, revisions to the previous two months of data, as well as the annual benchmark revision, will also attract attention.

The details of the labour market report are also set to paint a strong picture of the US jobs market. 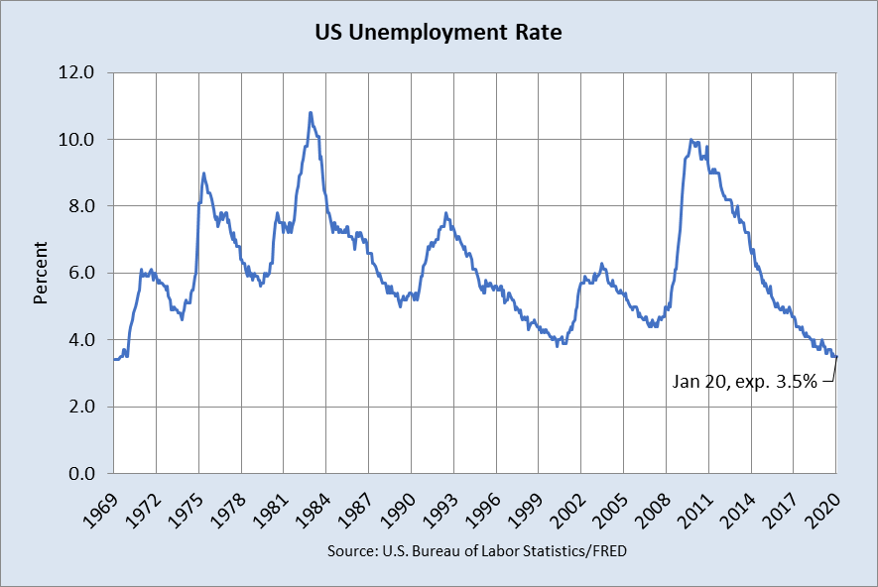 Earnings, meanwhile, are set to continue increasing at a relatively subdued pace, despite the labour market remaining tight. This phenomenon isn't, however, unique to the US, with post-crisis earnings growth subdued in most developed economies.

In January, average hourly earnings are expected to have increased by 0.3% MoM, which should push the YoY pace of earnings growth to 3.0%. 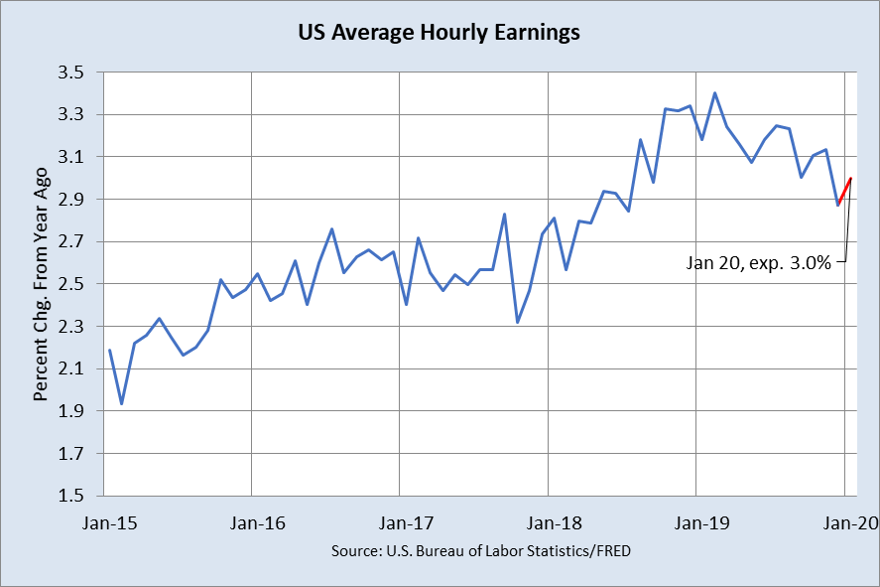 Should the report surprise to the upside, the dollar would likely continue its recent run higher; however, no matter the numbers this lunchtime, this jobs report is unlikely to have a significant impact on the FOMC's monetary policy outlook, with policy set to remain on hold for the foreseeable future.

North of the US border, January's Canadian employment report will also be released this lunchtime.

Employment is set to have increased by a net 15,000 last month, however the dataset does have a track record of being a bit of a random number generator, so some scepticism may be warranted here.

Meanwhile, unemployment is expected to have held steady at 5.6%, while the participation rate (exp. 65.6%) and earnings figures will also be closely watched.

Despite the US labour market report stealing the attention, today's Canadian figures are likely to have greater market and monetary policy impact, with the BoC now firmly in a dovish, data-dependent stance. Softer than expected jobs figures would be indicative of a more prolonged than expected slump in the Canadian economy, and would accordingly raise the prospects of insurance cuts being delivered in the near-term; thus weakening the loonie.

Looking ahead to next week, the data calendar appears relatively quiet, hence market focus will likely remain on developments relating to the ongoing coronavirus outbreak.

On the data front, the US consumer - which continues to propel the ongoing expansion - will be in focus, with Friday seeing the release of January's retail sales report, and preliminary consumer sentiment figures for February. January's CPI inflation figures are also due from the US.

Elsewhere, economic growth will be in focus, with initial reads on fourth quarter GDP due from the UK and Germany, along with a 2nd estimate of eurozone GDP. I should note that the UK release will likely show the economy near stagnation, with the data referencing the fourth quarter of last year and associated political uncertainties.

Finally, in the land of monetary policy, the first Reserve Bank of New Zealand (RBNZ) decision is due next week. Policymakers are likely to keep rates unchanged, taking an upbeat, 'wait and see' stance after last year's 75bps worth of cuts.