The latest market highlights and our views on the key developments as risk appetite sees a 'dead cat bounce' on Tuesday as sentiment becomes temporarily de-coupled from the continued stream of coronavirus headlines; as the Budget comes into focus today

News about the virus itself remains negative, with the epidemic continuing to spread at a rapid pace. The number of global infections now exceeds 115,000, and the daily increase in cases outside China continues to outpace cases within. 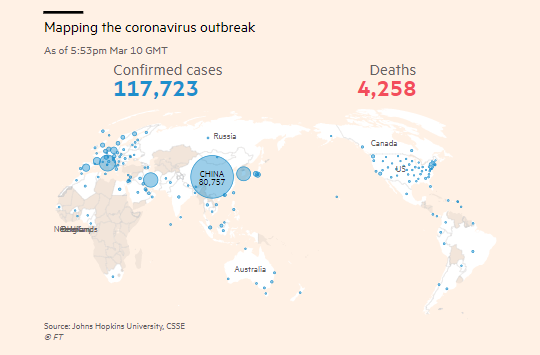 The continued rapid spread of the virus has led Italy to impose a nationwide lockdown - similar to that seen in China - while a plethora of other nations are beginning to implement 'social distancing' measures - aimed at reducing, or delaying, the peak of the epidemic.

Fiscal stimulus measures also remain on the table, though few substantial measures have been delivered. For example, the White House's reported plan for payroll tax cuts seems suspiciously scant on details; while ECB President Lagarde's calls for a 'rapid fiscal reaction' from eurozone governments will likely once again fall on deaf ears.

Of course, and as mentioned previously, the 'sudden stop' economic effects caused by the aforementioned lockdowns, and the twin supply-demand shock facing the global economy, are now the market's primary concern as investors continue to attempt to gauge the extent of the fallout from the epidemic - which is rapidly becoming a pandemic in all but name.

Despite this, markets momentarily de-coupled from the negative news flow on Tuesday, as risk appetite showed -- what are likely to be temporary -- signs of a rebound yesterday.

Starting with equities, European bourses gained as much as 4% in early trading, looking on track to wipe out more than half of Monday's losses.

However, as the afternoon progressed and sentiment soured, bourses reversed course, resulting in the heatmap once again becoming a sea of red at the close. 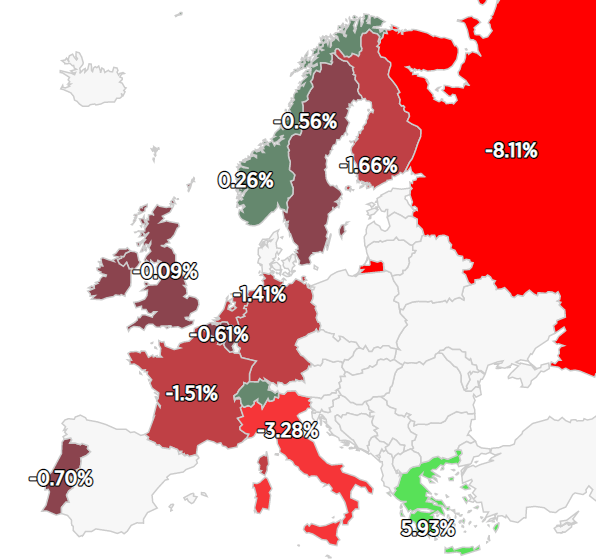 At a broad level, the pan-continental Stoxx 600 ended the day 1.15% lower - remaining in bear market territory - having chalked up a peak-to-trough intraday decline of more than 5%. All sectors - bar basic resources - ended the day in negative territory.

Across the pond, US equities rebounded solidly, with the benchmark S&P 500 closing 4.9% higher, the index's biggest 1-day advance since December 2018, as the majority of sectors ended the day in positive territory. 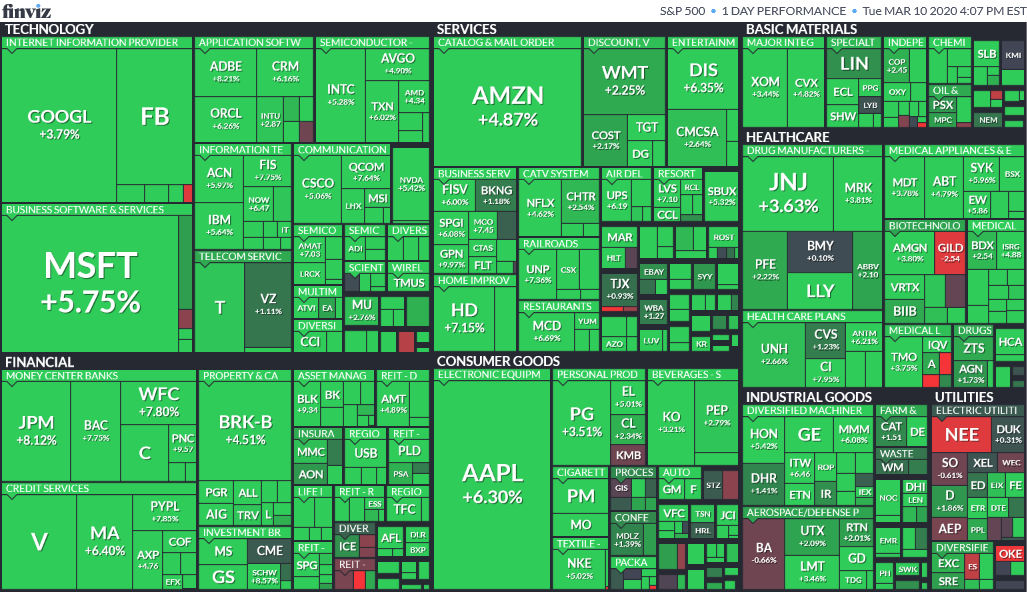 It is, at this point, important to note that bounces can and do happen during market corrections and at times of heightened volatility. This doesn't alter the longer-term trend for major indices, which remains firmly downward with the coronavirus epidemic set to get worse before things start to improve.

Speaking of volatility, the VIX -- a so-called 'fear gauge' for the S&P 500 -- remains elevated, continuing to hover close to the 50.0 mark. To put such a level in perspective, this corresponds to traders expecting a roughly 3% daily move -- something which is usually seen over the course of a week, rather than a day.

Meanwhile, in the bond market, intraday trading in Treasuries was once again volatile, with the 'dead cat bounce' in risk sentiment in evidence once again. Benchmark 10-year yields rose by a whopping 23bps on Tuesday, though remain depressed at 0.7%. Yields across the curve increased by a similar magnitude -- though the curve as a whole remains flat, showing the market continuing to price imminent policy easing from the Fed. 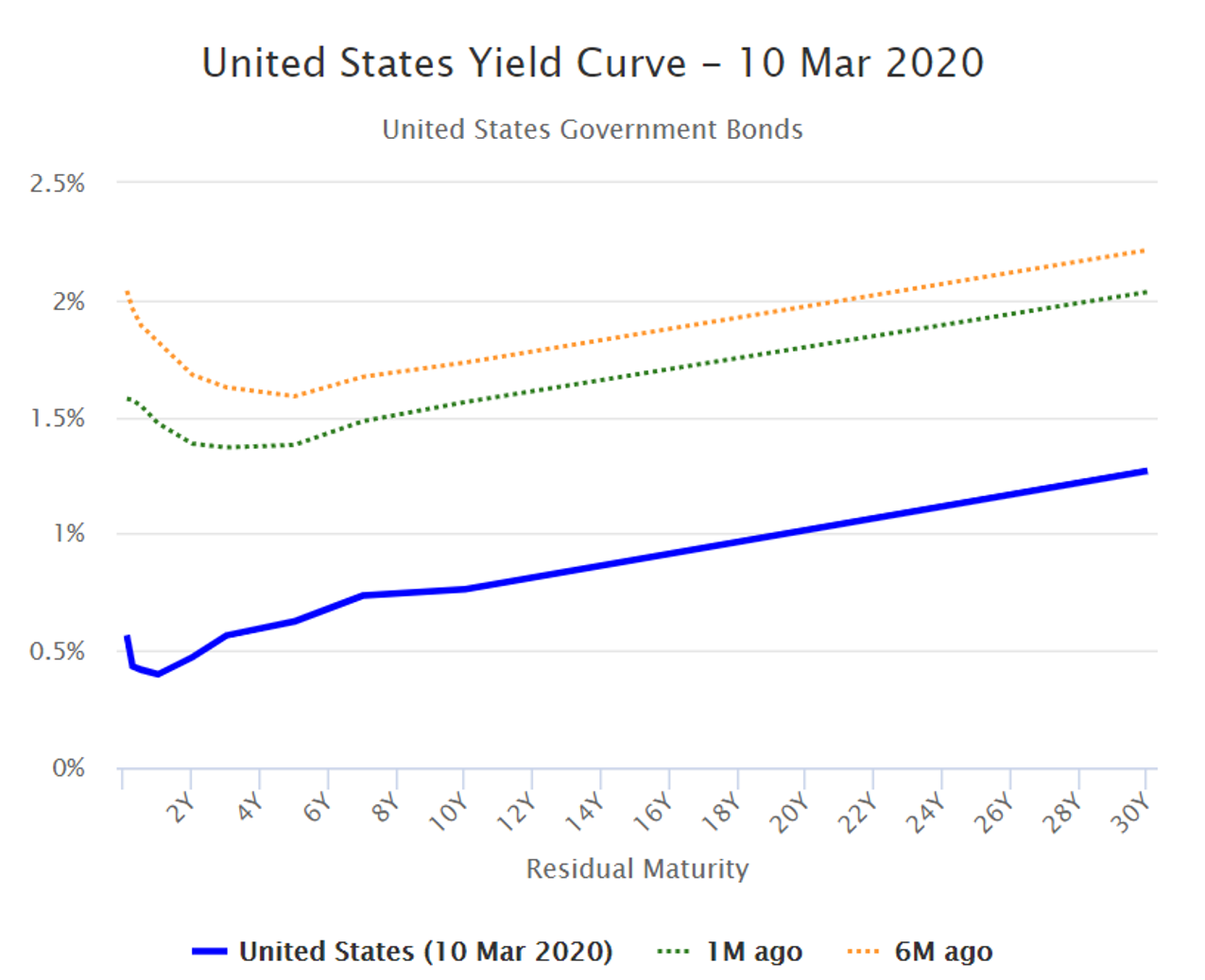 The temporary bounce in sentiment wasn't wholly in evidence across G10 FX, with the dollar's march higher -- in line with Treasury yields -- leaving all other majors in its wake. 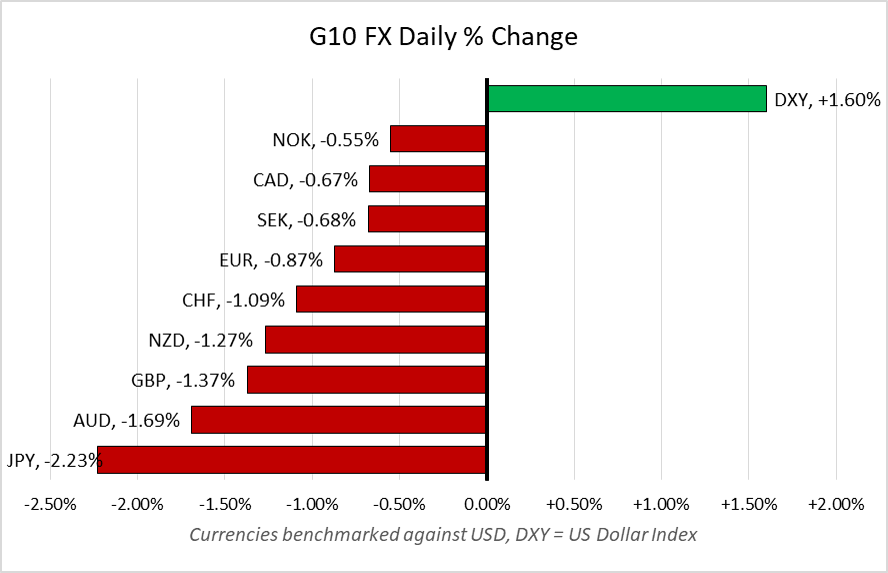 The greenback's advance -- its first gain in more than a week against a basket of peers -- came as markets also reduced their bets on the Fed announcing a 75bps cut next week, though the buck remains close to the 12-month lows seen earlier in the week.

Elsewhere, the typical havens of the Japanese yen and Swiss franc faced headwinds amid the temporary improvement in sentiment; though antipodean FX failed to take advantage of the more risk-positive environment.

Sterling, meanwhile, faced stiff headwinds ahead of today's Budget, with market participants appearing jittery about the measures that would be announced given recent rumours that 'big ticket' infrastructure spending would be delayed until the autumn.

Against the dollar, sterling shed 1.25%, in a slide that lasted throughout the whole of both the European and North American trading sessions, taking cable briefly below $1.29 for the first time in a week.

Similar declines were in evidence against the euro, where sterling fell more than 1%, dipping below the €1.14 handle.

Turning to commodities, oil prices surged yesterday - rebounding after the biggest fall since 1991 on Monday - as markets grew more hopeful for measures to stabilise prices after Reuters reports that OPEC+ may return to the table for further talks after the alliance collapsed last Friday.

Global benchmark Brent settled 8.6% higher, while US WTI crude added more than 10%, despite confirmation that Saudi Arabia would begin to pump a record 12mln bbl per day - raising the threat of oversupply.

Gold prices, meanwhile, faced headwinds, despite the souring in sentiment, with the precious metal on track for a 1.6% daily decline. Some of the losses in gold are likely to stem from traders needing to liquidate positions in the market in order to fund margin calls elsewhere.