The latest market highlights and our views on the key developments as the week gets off to a sluggish start across G10 FX; the latest UK labour market figures are pivotal for sterling & the BoE; and investors continue to keep a close eye on Davos and Trump's impeachment trial

It was a rangebound start to the week for G10 FX yesterday, with volumes significantly thinner than usual with US markets closed for Martin Luther King Jr. Day.

The below chart shows the limited movement in major currencies on Monday. 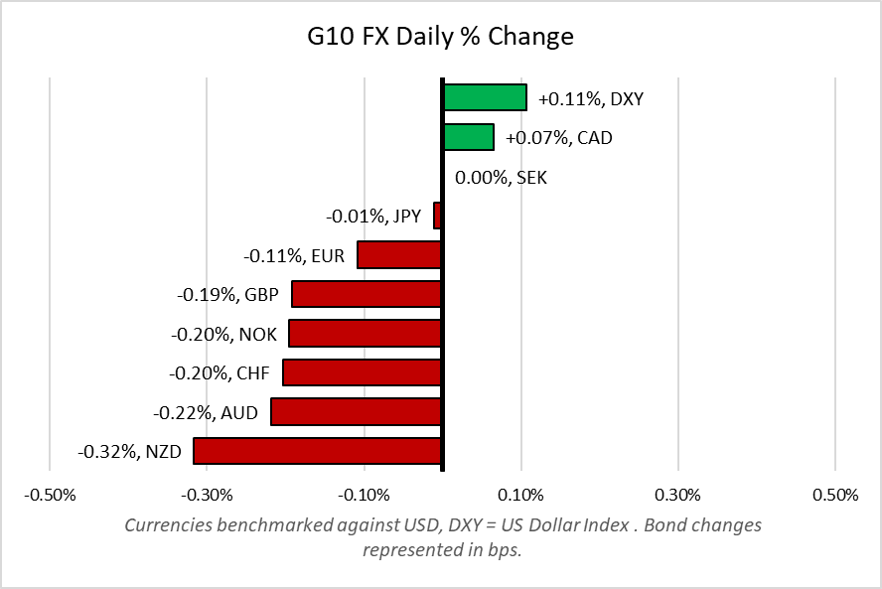 This low volatility, however, has been in evidence for some time across G10 FX, and forms a cornerstone of my outlook for the year ahead. FX swings have been considerably dampened owing to the low interest rate environment, narrow G10 rate differentials, and the plentiful supply of central bank liquidity through ever-expanding balance sheets.

As if to evidence this point, JPMorgan's proprietary gauge of FX volatility fell to a fresh record-low last week, and there are scant signs of the quiet conditions ending in the near-future. 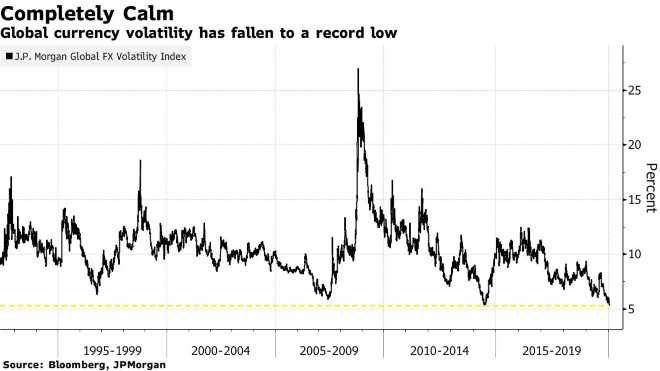 Meanwhile, the only notable release for investors to get their teeth into yesterday was the quarterly World Economic Outlook update from the International Monetary Fund (IMF).

The IMF made a modest downward revision to their expectations for the global economy, expecting global growth of 3.3% this year, and 3.4% next. The revision should, however, give little cause for concern, with much of the drag on activity stemming from emerging markets, particularly India. 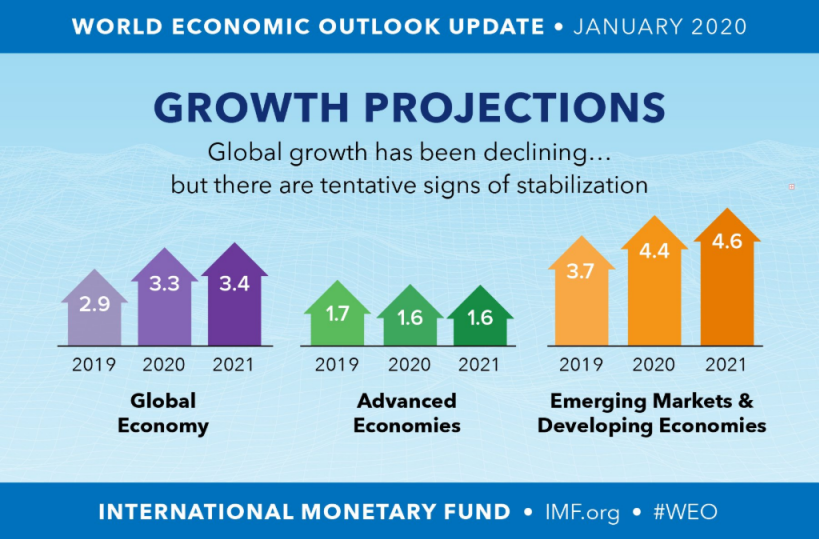 The IMF's comments on the outlook were, on balance, neutral. While the Fund noted tentative signs that manufacturing activity and global trade are bottoming out; and that risks to the global economy are tilted less to the downside in October, it remains clear that loose monetary, and increasingly accommodative fiscal, policies will be required to maintain the present outlook.

However, the IMF also noted a number of key risks to the outlook - namely a flare up in trade tensions, resurgent US-Iran tensions, and global social unrest. None of these can be written off as tail risks, and investors should remain acutely aware of them as the year progresses.

Early this morning, the Bank of Japan announced their latest monetary policy decision, keeping all policy instruments unchanged - including leaving rates at a record-low -0.10%.

The BoJ did, however, upgrade their forecasts for Japanese economic growth, expecting an expansion of 0.9% this year, in light of PM Abe’s recent $120bln fiscal stimulus package. On the other hand, inflation projections remain benign, with the BoJ expecting CPI at just 1.4% in two years time. As a result, the present ultra-loose, expansionary, policy stance is here to stay.

The yen was little moved by the policy decision, as has been the recent trend; with the currency continuing to take its lead from shifts in global risk appetite.

After yesterday's market boredom, today should be considerably more interesting, with a number of important events on the calendar.

Highlighting today's data docket is the latest set of labour market figures from the UK - another important data point as market participants continue to try and second-guess the MPC's decision at the end of the month.

The jobs report is set to show that unemployment held steady at 3.8% in the three months to November, the third consecutive month that the joblessness rate would have remained at a 45-year low, showing that the labour market remains tight. 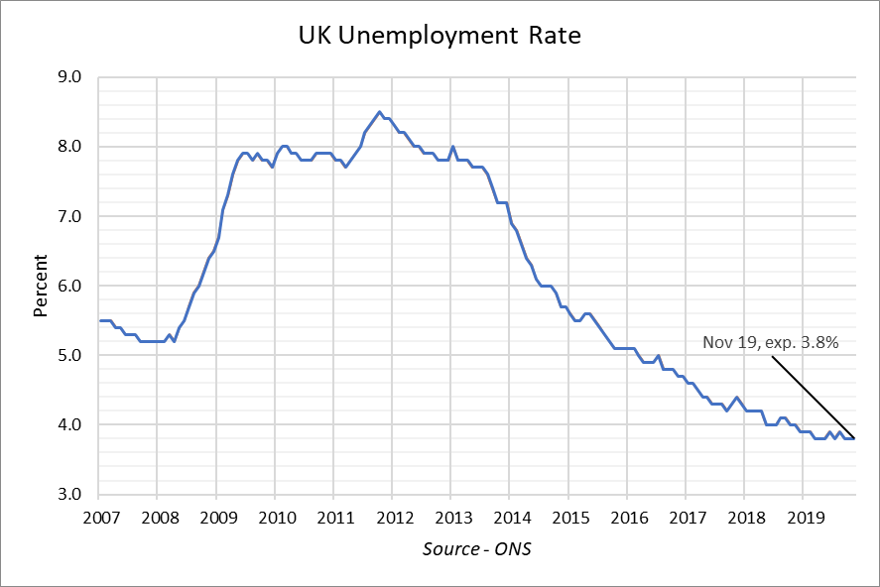 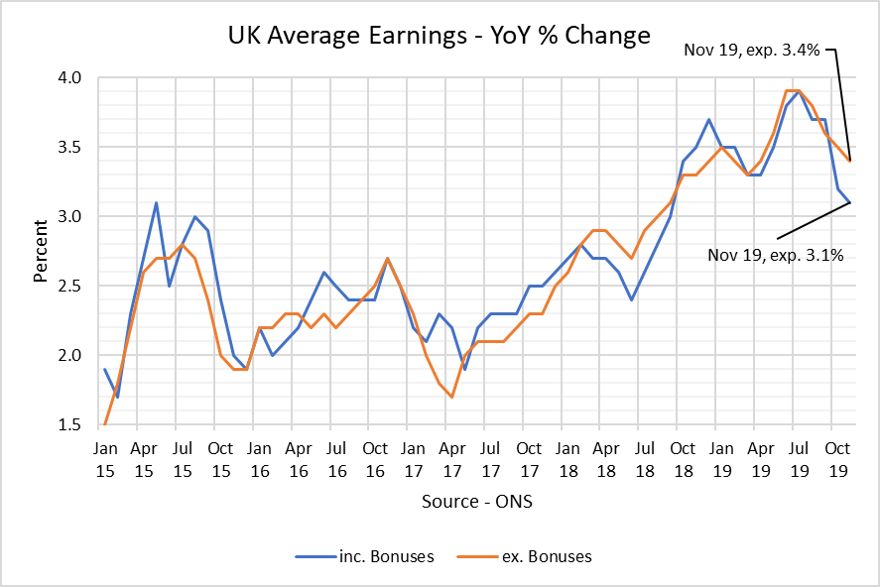 Investors will also pay cursory glances to the claimant count change and rate, both referencing December, which are useful leading indicators of future labour market conditions.

In terms of both the pound and rates, the playbook is simple. Softer than expected figures, particularly in the earnings department, would result in a softer sterling and lead markets to price in an even greater chance of a January BoE rate cut. Currently, the market sees a roughly 70% chance of a 25bps cut next Thursday.

However, the risks to sterling are asymmetric, with an upside surprise likely to see limited gains, as doubts over this month's MPC decision would continue to linger.

Looking past tomorrow's jobs data, Friday's flash PMI surveys remain this week's key UK data point. The surveys will detail the economic situation wholly after December's election, hence traders and policymakers alike will be watching closely for any signs of a 'Boris bounce' in economic activity.

Today's other notable release comes from the eurozone, in the form of this morning's sentiment surveys from the ZEW economic institute.

In Germany, sentiment is expected to have increased further in January, with the index expected at a near 2-year high of 15.8. This increase in sentiment will likely be driven by a reduction in Sino-US trade tensions, as well as increased clarity over the Brexit process.

Sentiment for the eurozone as a whole is also expected to have remained healthy into the New Year, with the index expected at 5.5. This would represent the first time that eurozone sentiment has chalked up back-to-back months in positive territory since early 2018.