The latest market highlights and our views on the key developments as the US consumer remains in good health; markets struggle for direction into the weekend; a busy week of UK data awaits; and investors eye the latest FOMC and ECB minutes

Friday brought markets their latest check-up on the health of the US consumer, the primary force underpinning the ongoing economic expansion.

Starting with retail sales, spending remained solid in January, with headline sales increasing by 0.3% MoM, the fourth consecutive monthly increase; while sales excluding autos increased by the same magnitude - both falling in line with expectations. 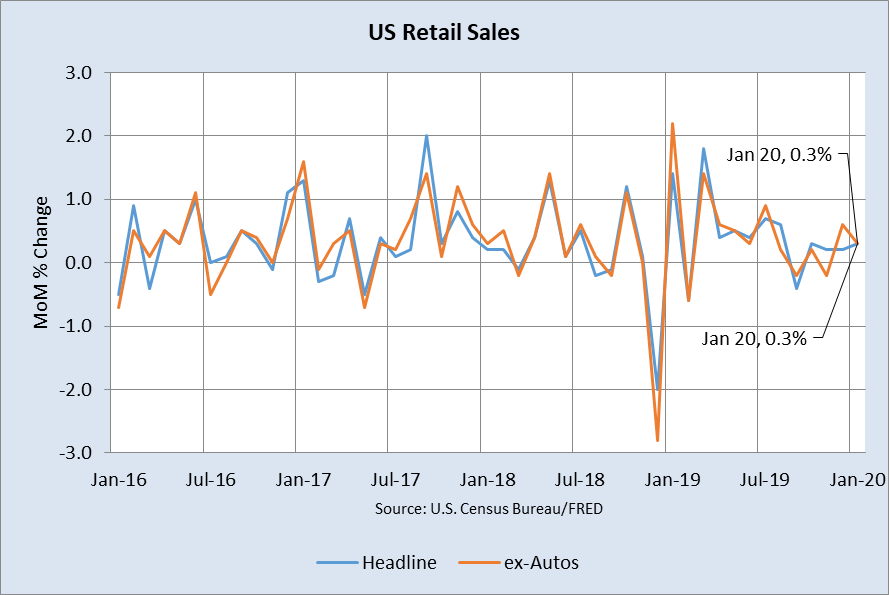 However, some of the shine was taken off of the solid release after modest downward revisions - of 0.1% apiece - to December's reports; as well as a disappointing stagnation in the control group sales measure.

This measure, which contains a basket of goods broadly representative of those used in the GDP report, failed to measure any growth in January, meaning that control group sales have now recorded no growth over the last 6 months.

The recent softness, however, should give little cause for longer-term concern, with clothing being a significant drag on the measure. Clothing sales declined by 3.1% MoM in January, the biggest 1-month drop since 2009. 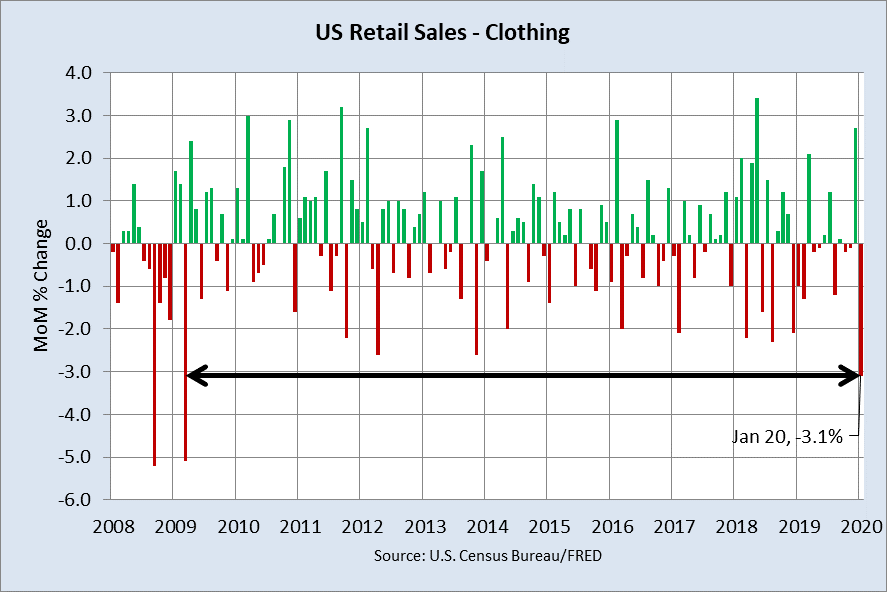 Overall, however, the sales report painted a solid picture of consumer spending, which should see the present expansion supported in the months to come.

Further supporting this view was February's preliminary consumer sentiment report from the University of Michigan, which showed sentiment improving for the sixth straight month. 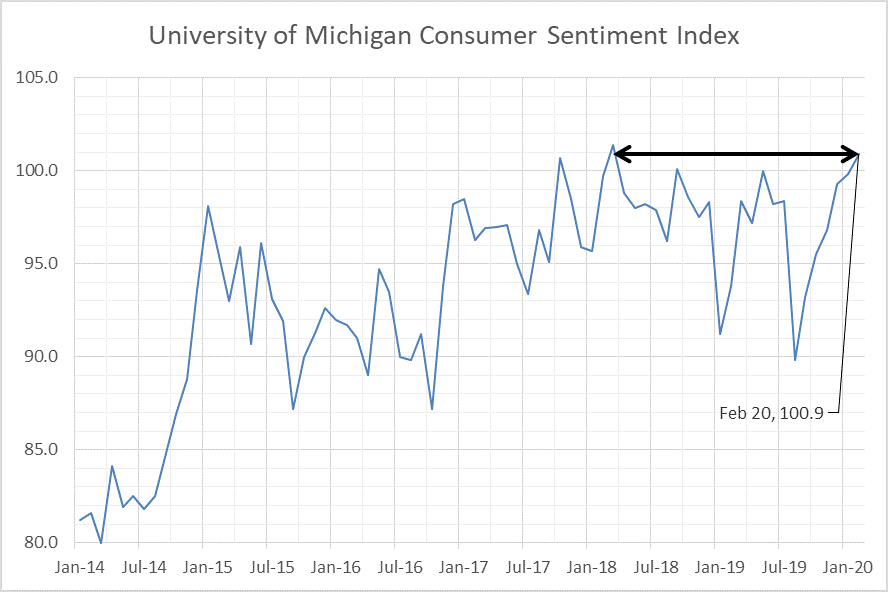 The sentiment index rose to 100.9, up from January's 99.5, to hit its highest level since March 2018, indicative of the solid pace of spending continuing in the months to come.

Taking the two reports together, the outlook for the US economy remains healthy, meaning that the releases should have no impact on the monetary policy outlook, with the FOMC set to remain on hold for the foreseeable.

As a result, the dollar was largely unmoved by the data, ending the day with a modest gain of around 0.1% against a basket of peers.

Elsewhere on Friday, markets struggled for direction, with investors not treading cautiously, not wanting to take sizeable positions or carry risk over the holiday weekend in the US.

As a result, most of G10 FX was rangebound as the week drew to a conclusion, though the euro continued its recent string of declines, having now lost ground on 9 out of the last 10 trading days. 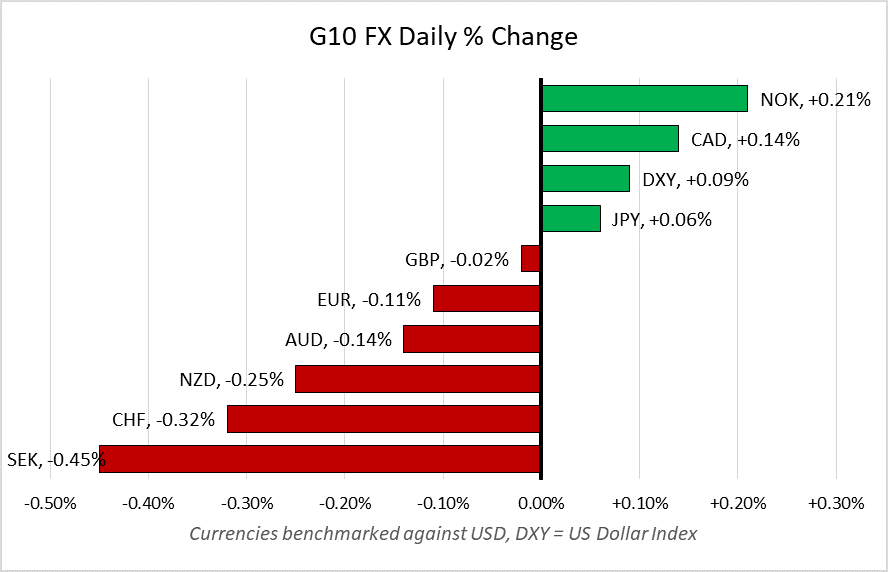 Across the pond, both the benchmark S&P 500 and the tech-heavy Nasdaq managed to eke out fresh record closes, closing with gains of 0.2% apiece.

Bond markets also rallied, perhaps as investors sought protection and took out hedges ahead of the long weekend. 10-year Treasury yields were 3bps lower, with the 3-month 10-year spread hovering close to inversion once again.

This protection seeking was also evident in gold prices, with the precious metal settling 0.3% higher in the spot market.

The trading week is set to get off to a sluggish start today, with the closure of US and Canadian markets for public holidays set to result in sharply reduced liquidity and quieter than usual trading conditions.

The aforementioned public holidays also mean today's data calendar is lacking in any notable releases, meaning investors will likely have little to chew over.

Of course, the ongoing coronavirus outbreak in China will continue to drive risk appetite, with the number of confirmed cases now nearing 70,000.

Other than that, markets will likely take cursory glances at this afternoon's remarks from ECB Chief Economist Philip Lane; as well as today's Eurogroup meeting of finance ministers for any signs of fiscal stimulus on the horizon.

Looking ahead, it's set to be a busy week of UK data, with markets set to receive the first comprehensive look at the UK economy since the election, in the form of this week's CPI, labour market, retail sales, and PMI reports.

Across the data releases, investors will be looking for confirmation that the post-election 'Boris bounce' in sentiment is beginning to translate into an improvement in 'hard' economic data.

As such, markets will look for inflation to begin to pick up, the labour market to remain tight, and for retail sales to snap the record-long streak of five consecutive months of stagnation or declines.

Meanwhile, February's flash PMI surveys - due on Friday - will show whether the post-election bounce in optimism was short-lived, or whether business have remained upbeat. The surveys will also give an early indication on the impact of the coronavirus outbreak on the China-dependent manufacturing sector.

The Week Ahead - Macro

Elsewhere this week, the data calendar is relatively busy.

On the monetary policy front, this week is all about central bank minutes, with records of the latest RBA (Tues), FOMC (Weds), and ECB (Thurs) meetings all due this week.

Investors will carefully parse the minutes for any hints on the policy outlook, particularly from the RBA where - despite indications that the economic outlook is improving - policymakers continue to digest the implications of recent wildfires, ongoing droughts, and the coronavirus outbreak on the Australian economy.

Elsewhere, the FOMC minutes are set to show policymakers continuing to describe policy as 'appropriate', with any policy changes remaining unlikely barring a 'material reassessment' of the outlook.

The ECB minutes, meanwhile, are likely to see policymakers re-emphasise the requirement for fiscal stimulus from eurozone governments, while policy changes remain unlikely until the conclusion of the strategy review.