The latest market highlights and our views on the key developments as the trading week gets off to a lacklustre start amid a lack of fresh impetus; Fed Chair Powell's semi-annual testimony is eyed for clues on the policy outlook; and this morning's UK GDP figures are set to show a sluggish pace of growth

Markets struggled for direction on Monday, having difficulty shaking off the weekend slumber, lacking fresh impetus in the absence of any major data releases.

As a result of the lack of economic releases, focus remained on the ongoing coronavirus outbreak, though markets continue to appear relatively resilient to virus-related news.

Some of this resilience is likely to stem from the continued decline in the virus' infection rate - with the daily increase in confirmed cases now standing at roughly 7%, well below its 63% peak. 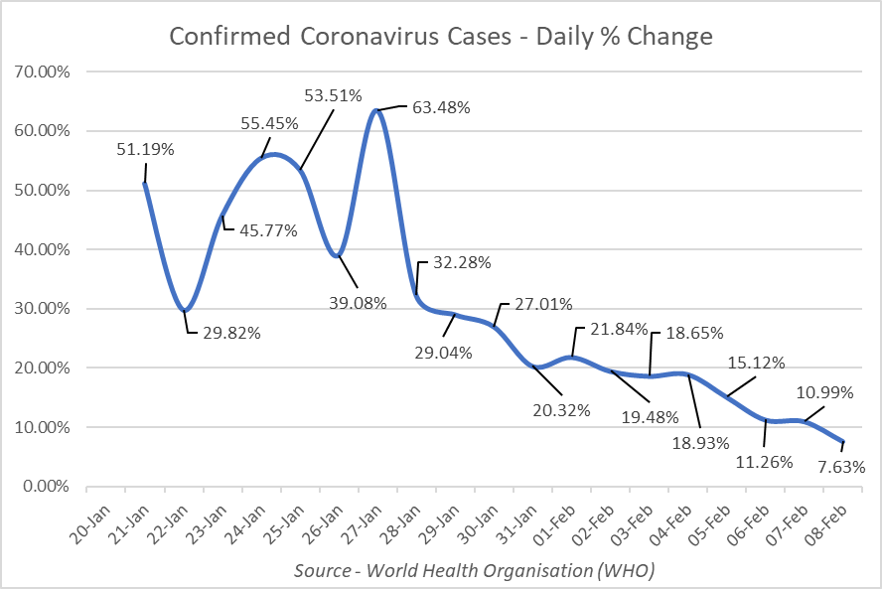 However, a note of caution. China are, from tomorrow, changing the way that confirmed cases are reported. An instance of infection will only be reported as 'confirmed' if the patient tests positive for the virus and displays symptoms. If only one of these variables is true, the case will not be 'confirmed'.

Of course, this will result in the rate of increase of 'confirmed' cases declining further - purely due to the definition change. However, it will make the full scale of the outbreak even more difficult to gauge.

Nonetheless, G10 FX was largely unaffected by these reports, with market participants continuing to believe that the global economy will be able to withstand any virus-related dip in demand.

As such, the typical safe-havens of the Swiss franc and Japanese yen traded flat on the day, though the dollar continued its march higher into a 6th straight day, adding a modest 0.15% against a basket of peers.

Down under, the risk-sensitive Aussie dollar bounced from the decade-low hit on Friday, closing around 0.1% higher. The Aussie's antipodean counterpart failed to gain ground, however, with the Kiwi dollar ending the day 0.2% lower.

Here in the UK, cable (GBP/USD) bounced from a fresh year-to-date low hit in early Asian trading, ending the day with a gain of 0.25%. 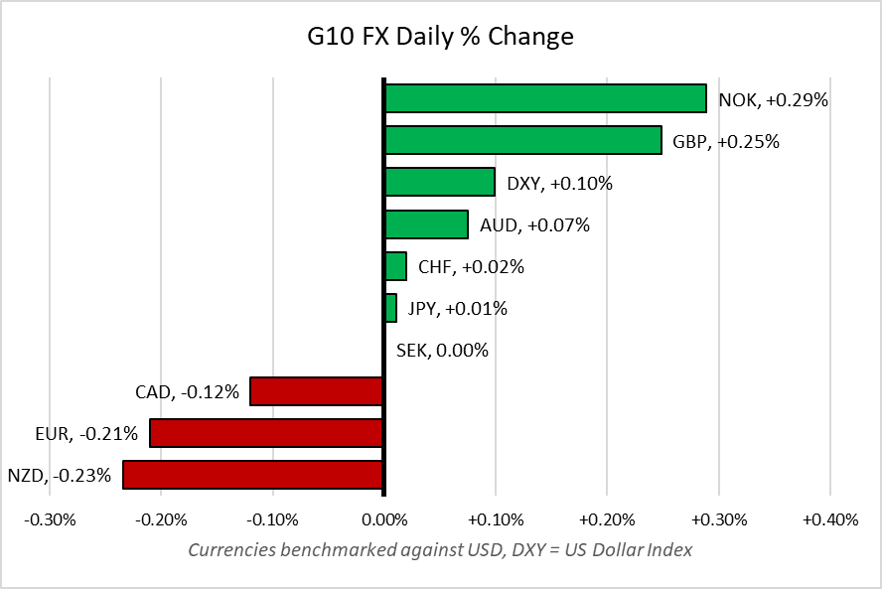 Across the pond, US equities chalked up solid gains, with both the Nasdaq and S&P 500 closing at fresh all-time highs. The former, tech-heavy index closed more than 1% higher, while the S&P added just over 0.7%.

Meanwhile, oil prices continued to slide on both demand concerns from China, and falling expectations of any emergency supply cuts from OPEC. Global benchmark Brent ended the day 2.2% lower, while US WTI crude shed 1.5%; with the spread between the two blends falling to the narrowest since August 2019.

Focus on the Euro

Meanwhile, taking into account the quiet trading conditions, now is an opportune moment to take a more detailed look at the euro - which extended its recent declines into a sixth straight day yesterday; the longest such run since September 2019. 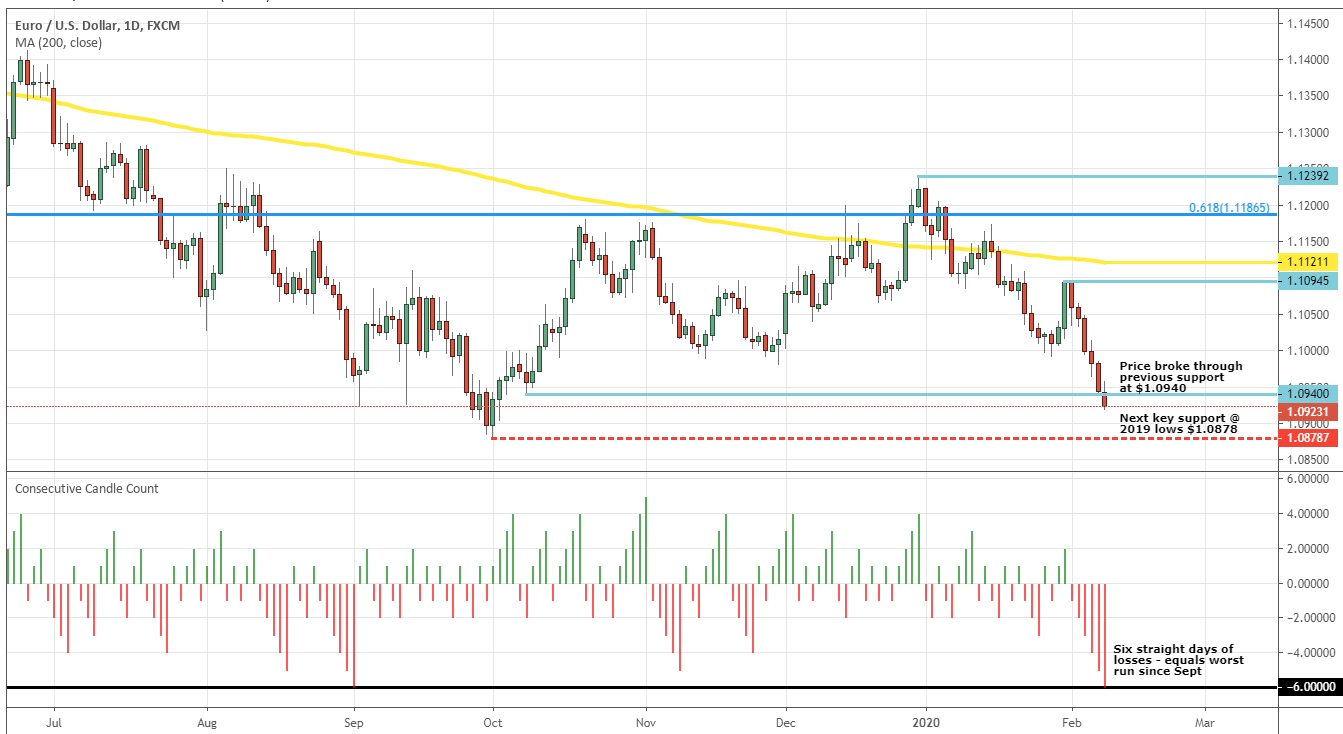 The euro's 0.2% decline, which took the common currency to its lowest levels since early-October last year, came as a degree of political risk was priced in after the resignation of Annegret Kramp-Karrenbauer as leader of the German CDU Party. AKK, as she is known, had been the hand-picked successor to Angela Merkel as Chancellor, hence her resignation has thrown the succession race wide open and raised doubts about Germany's post-Merkel political direction.

This, combined with the dollar's strength, saw the euro tumble below the previous support at $1.0940, and into something of an air pocket before the next notable support level around $1.0880.

Should the dollar's march higher continue, and eurozone data continue to come in on the soft side, the pairing appears ripe for further downside.

The US monetary policy outlook will be in focus today, as Fed Chair Powell heads to Capitol Hill for the first of two days of Humphrey-Hawkins testimony to Congress.

Powell's testimony to the House Financial Services Committee on the Fed's semi-annual Monetary Policy Report is likely to see the Fed Chair reiterate comments made at the January FOMC. Namely, that activity is rising at a 'moderate' rate; the labour market is 'strong'; business investment 'remains weak'; and that the Fed are 'not comfortable' with inflation running under the 2% target.

However, market participants will be paying close attention to any comments on the downside risks facing the economic outlook, particularly those relating to the ongoing coronavirus outbreak. Powell is, however, likely to say it is too early to gauge the full impact of the virus on the US economy.

The focus on downside risks stems from the Fed's 'wait and see' policy stance, with rates set to remain on hold barring a 'material reassessment' of the outlook. Investors appear to believe that the coronavirus outbreak constitutes such a reassessment, pricing in an even chance of a rate cut by June.

It will be interesting to see whether Powell endorses or pushes back on this pricing, though I expect the Chair to maintain the FOMC's stance of remaining on hold.

It should also be noted that, while investors will be focused on macro and monetary policy comments, the Congress members questioning Powell will likely want to ask more locally-focused, political questions, particularly given that we are in election year. Expect Powell to play these with a straight bat.

Elsewhere, a host of other G10 policymakers are also due to speak today.

Remaining in the US, four other Fed speakers are due today, including remarks from the two most dovish FOMC members - voter Kashkari, and non-voter Bullard. These speeches will be joined by scheduled comments from non-voter Daly and Vice Chair for Supervision Quarles; though the latter's speech on regulations is unlikely to be a market-mover.

In Europe, ECB President Lagarde will make brief remarks when presenting the Bank's Annual Report to the European Parliament. Any policy comments are once again likely to centre on the need for fiscal stimulus with monetary policy set to remain on hold until the conclusion of the ECB's strategy review at the end of the year.

Meanwhile, ECB Executive Board members Lane and Schnabel are also set to speak.

Here in the UK, outgoing BoE Governor Mark Carney will make one of his last scheduled appearances, testifying before the House of Lords Economic Affairs Committee. Carney will likely repeat the Bank's 'wait and see' stance, while emphasising policymakers' desire for the recent pick-up in sentiment to follow-through into improved 'hard' data in the months ahead.

Markets will also hear from dovish external MPC member Jonathan Haskel, who has dissented in favour of a rate cut at the last 3 MPC meetings. Expect a reiteration of Haskel's dovish stance and desire for looser policy this afternoon.

On the data front, today's only notable release comes from the UK, with the first estimate of fourth quarter GDP due this morning.

Expectations are for the economy to have stagnated on a QoQ basis, pulling back from the 0.4% growth recorded in Q3.

On a year-on-year basis, the economy is set to have chalked up the slowest pace of growth since early-2020, with expectations for GDP to have increased by just 0.8% YoY. 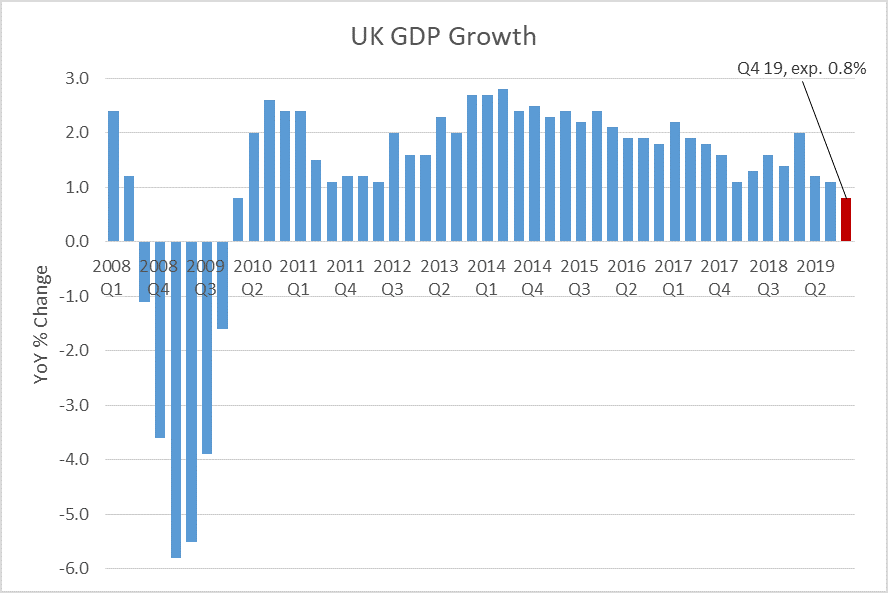 However, it is important to note that the data has a significant degree of political uncertainty baked into it; with the survey period having included the planned Brexit deadline in October, and the November-December general election campaign. As a result, we will have to wait until Q1's GDP report for evidence of how the economy is performing post-election.

Therefore, I would caution against reading too much into today's release.