The latest market highlights and our views on the key developments as the dollar surges to a near 3-year high as the economy continues to outperform peers; risk appetite firms on expectations of a policy response to the coronavirus outbreak; while UK retail sales and January's ECB minutes highlight today's calendar

The trading playbook is simple at the moment; just buy the dollar.

That's right, there's no stopping the greenback, which extended its gains into a sixth straight day on Wednesday, benefitting from sitting in a 'sweet spot' among G10 peers; the old adage of buy dollars, wear diamonds rings true again.

Combine these factors with the Treasuries continuing to hold the highest yield of any developed market bonds, as well as the US economy continuing to outperform peers, and it's not difficult to see why there is such insatiable demand for the dollar.

It was, specifically, improving risk appetite which gave the dollar its latest leg higher yesterday, with concerns about the coronavirus outbreak receding once again; while yesterday's release cemented the US economy's outperformance narrative - including housing starts hitting a 14-year high, and building permits rising at the fastest pace in eight years.

Minutes from the January FOMC meeting also helped to underpin the dollar, providing further confirmation that policymakers see the current stance as 'appropriate' and have little desire to alter rates any time soon.

Looking technically, the dollar index (which tracks the currency against a basket of peers, albeit weighted heavily towards the euro), rose to its highest levels since spring 2017 yesterday, closing in on the 100.0 handle. I wonder how long it will be until we get a Trump tweet trying to talk down the dollar? 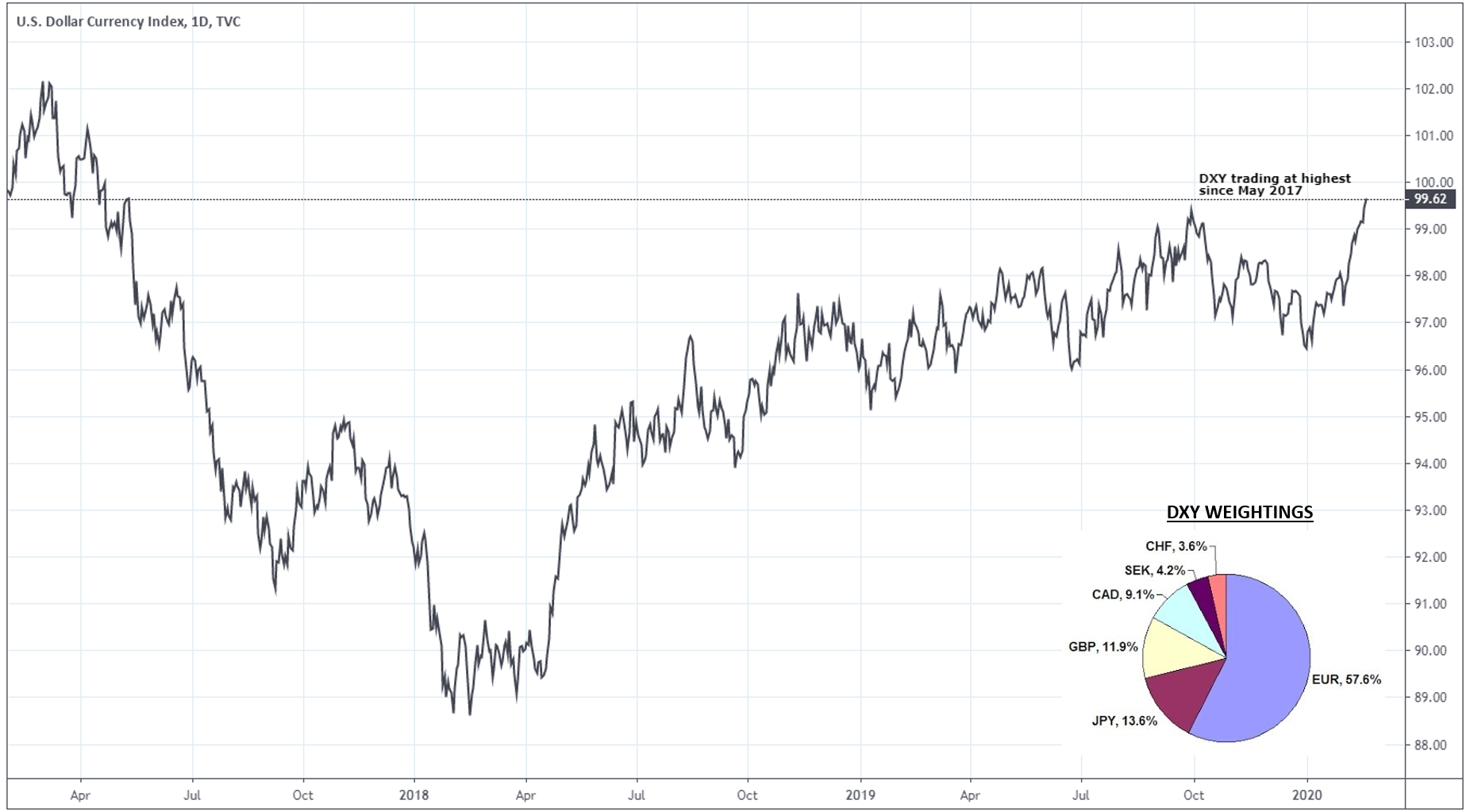 The dollar's march higher, meanwhile, saw EUR/USD take a further leg lower, chalking up its 12th decline in the last 13 days, falling to a fresh 34-month low at $1.0782. The pair now sits in the so-called 'Macron gap' formed after the French election result was declared. Support doesn't come until the low-$1.07s. 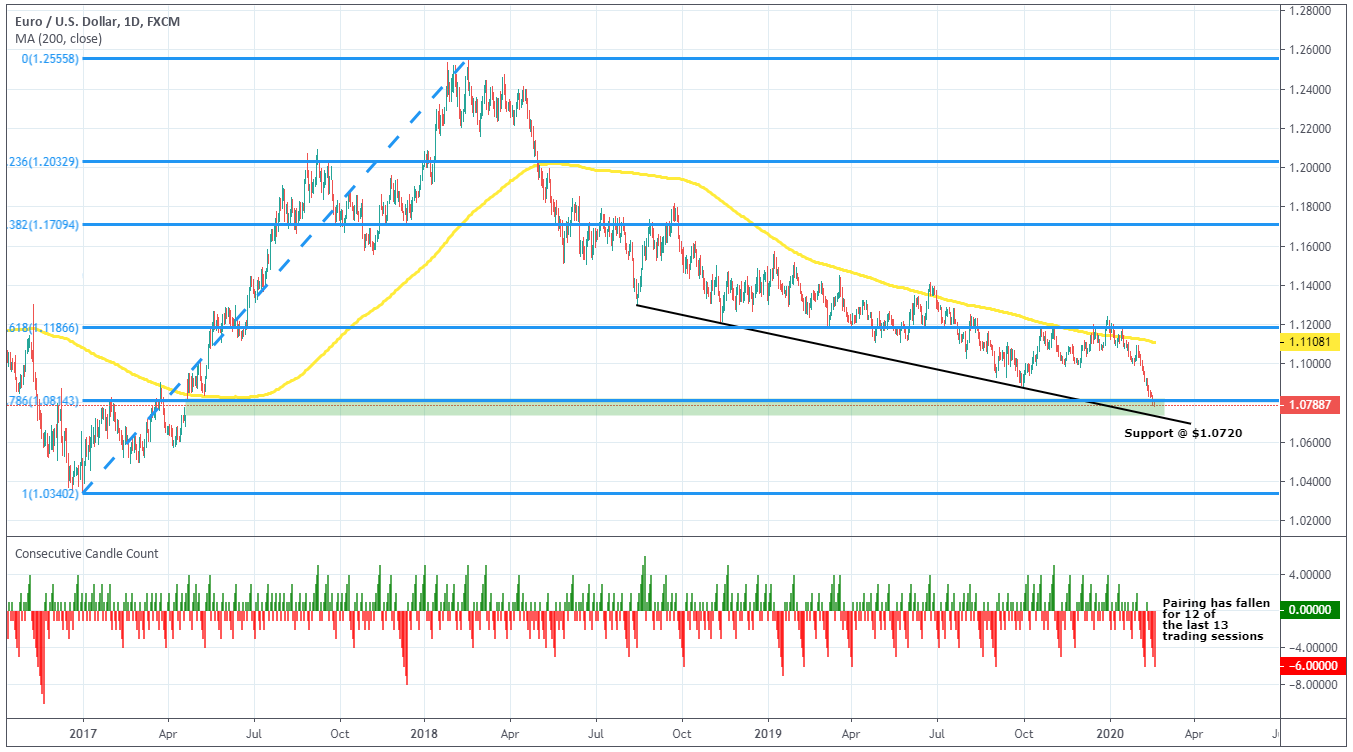 In fact - looking at the euro for a second - there are both technical (outlined above) and fundamental (German political risk, negative yields, dismal data) reasons for the common currency's ongoing decline; all of which fail to point to a reversal any time soon.

The dollar also gained ground against the yen, surging higher as fast as a bullet train, rallying to a 9-month high above the ¥111 handle. 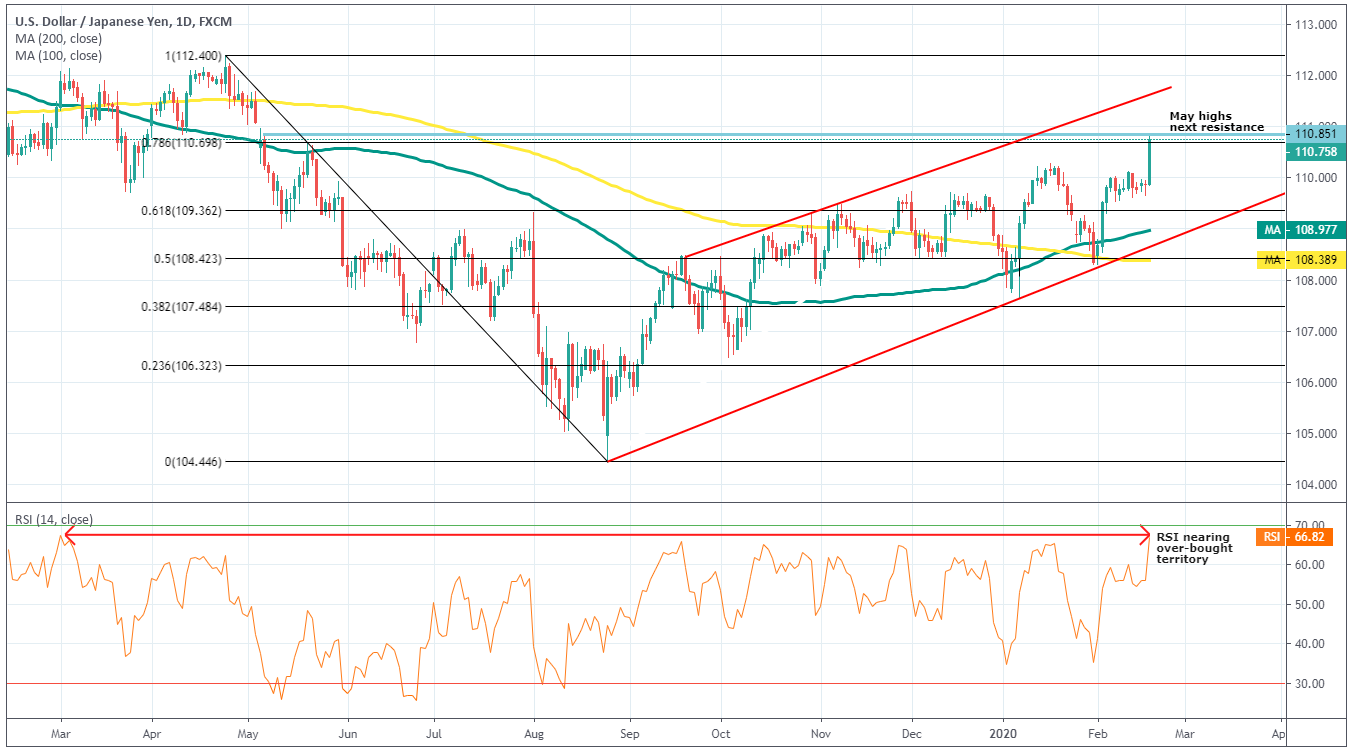 In other asset classes, the general theme was 'buy everything' as concerns over the coronavirus outbreak subsided and markets were reassured by expectations of a significant Chinese policy response.

Equity markets across Europe gained ground, with all bourses closing in the green, and the pan-continental Stoxx 600 closing 0.8% higher, at a record-high. In the US, both the S&P 500 and tech-heavy Nasdaq ended the day at all-time highs, adding 0.47% and 0.9% respectively.

Meanwhile, there was a continued healthy demand for Treasuries, likely as investors continue to hedge their riskier positions. 10-year yields ended the day unchanged, though remained below the yield on 3-month bills; a semi-reliable recession indicator. 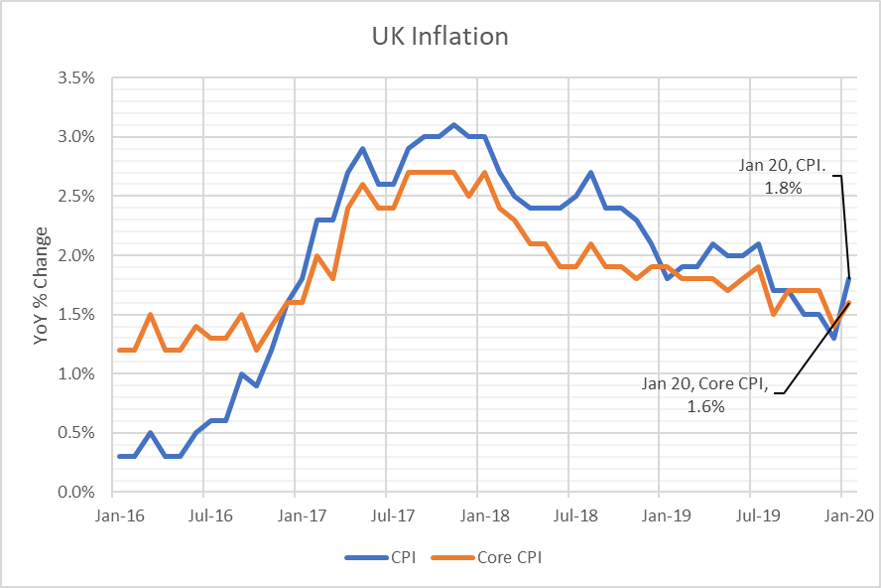 The unexpectedly large jump in headline inflation is due almost solely to energy prices, coming as the impact of last year's price cap reduction begins to fade from the numbers, and as petrol prices begin to increase.

However, the uptick in core inflation - a gauge that is more closely watched buy the Bank of England - is symbolic of price pressures beginning to build in the UK economy. This won't, however, alter the policy outlook, with rates likely to remain unchanged for the remainder of the year.

The pound failed to significantly benefit from the faster-than-expected pace of inflation, quickly erasing the 50 pip jump seen after the release. Amid unusually thin trading volumes, the pound stumbled to a 1-week low against the dollar, down 0.4%; while also shedding 0.3% against the euro, trading in a choppy manner around the €1.20 handle. 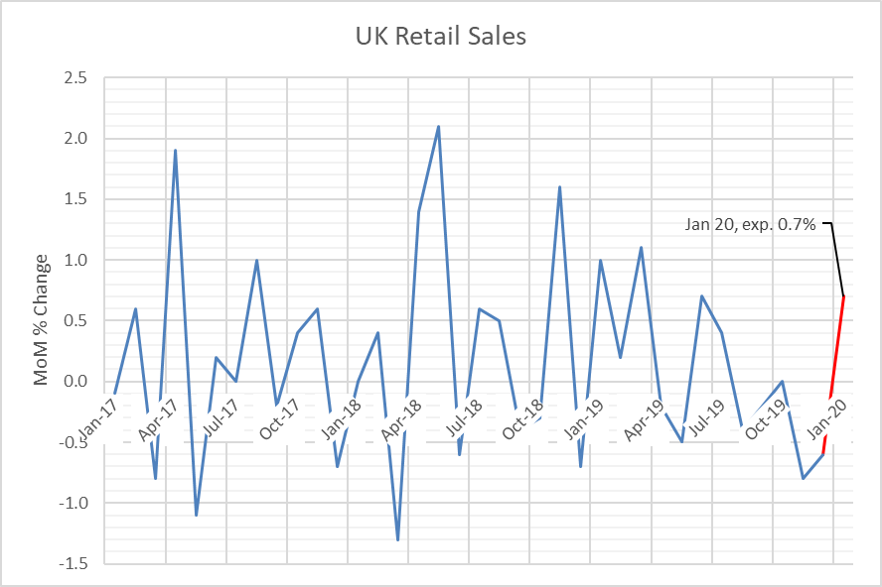 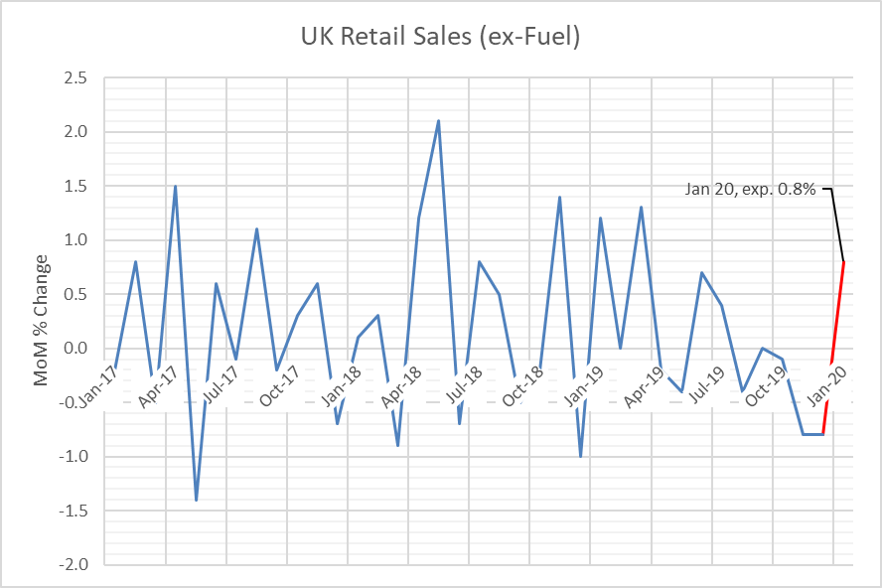 Should these lofty expectations be met, this would provide investors with confirmation that the post-election 'Boris bounce' in consumer sentiment is beginning to feed through into improving hard data. Of particular interest will be 'big ticket' purchases, with increasing sales of, for example, cars or white goods, a useful indicator that consumers are feeling more upbeat about the future prospects for the economy.

A solid sales report, combined with yesterday's increase in inflation, and the likelihood of significant fiscal stimulus being delivered in the March Budget, should combine to keep the Bank of England on the side-lines for the foreseeable future.

Meanwhile, on the monetary policy front, today sees the release of minutes from the January ECB meeting, hot on the heels of last night's FOMC minutes.

The meeting, at which policymakers kept all policy instruments unchanged, heralded the official start of the Bank's strategy review, hence the meeting account will likely be parsed for any further information on the scope of the review, and any hints on the likely conclusions.

Market participants will also examine the minutes for any hints on the policy outlook, where officials will likely reiterate their belief that the monetary policy toolkit has not yet been exhausted, while reiterating the need for fiscal stimulus from eurozone governments.

Of course, the impact of the coronavirus outbreak on the eurozone economy will also be in focus, though the meeting likely came too early for the full extent of the outbreak to have been known.