The latest market highlights and our views on the key developments as sentiment is crushed by the ongoing coronavirus pandemic - seeing equities plunge and yields rise as investors move to the sidelines, while the ECB's stimulus package falls well short of the mark

Sentiment was once again crushed on Thursday, as the coronavirus pandemic continued to roil markets - with President Trump's chaotically announced European travel ban only worsening matters.

The virus itself continues to spread at a rapid pace, with confirmed new infections continuing to increase exponentially outside China. 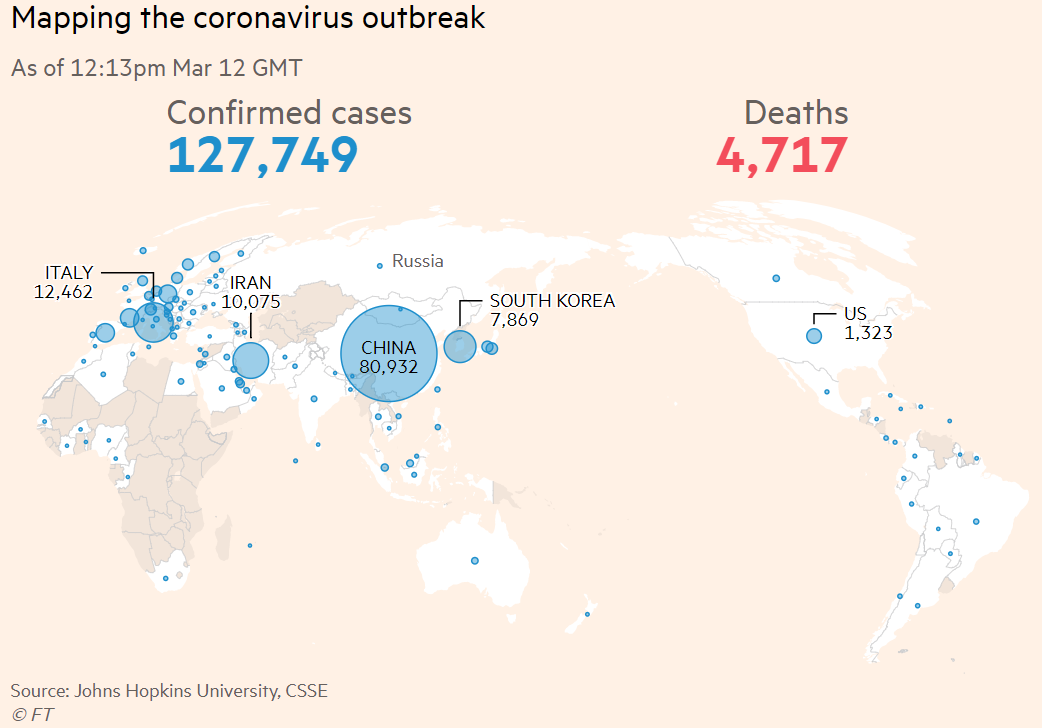 The markets, however, while continuing to focus on the economic implications of the pandemic, now appear to have moved into the 'panic' stage.

The selling seen on Thursday came purely out of fear among investors. Fear that central banks don't have the answers to the crisis. Fear over a lack of liquidity and funding. Fear over the unknowns of the virus itself. And perhaps even fear over potential systemic risks that the impact of the virus may expose.

These concerns combined into a potent mixture, which resulted in yet another bloodbath across asset classes, as investors -- rather than looking for safe-havens -- looked to exit the market altogether,

As a result, European equity markets capitulated, with losses deepening throughout the day, and the heatmap being an extremely ugly sea of red at the close. 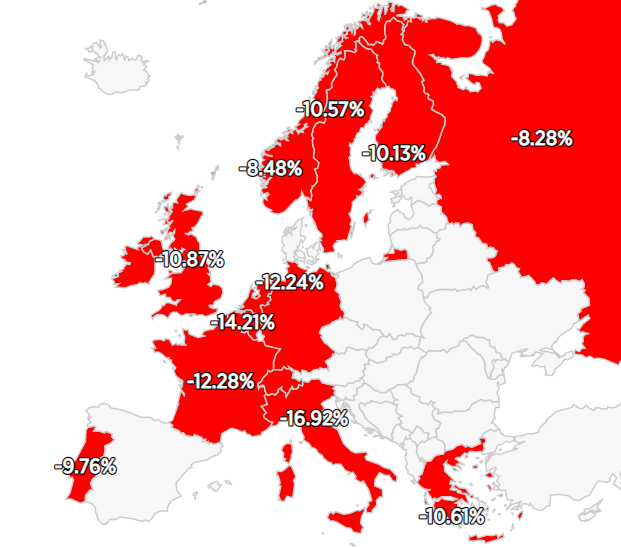 The pan-continental Stoxx 600 ended the day 11% lower, the index's biggest fall ever. Yes, that's the biggest fall on record - worse than any one-day declines seen during the financial crisis or the sovereign debt crisis.

Meanwhile, London's FTSE 100 declined by 10.9%, the London market's worst day since the 1987 crash, and the second worst day on record. Bourses in Frankfurt and Paris chalked up losses of a similar magnitude.

It was, however, in Italy where the losses were most severe - a fact which shouldn't surprise as the country remains on lockdown and all 'non-essential' businesses are forced to close. Milan's FTSE MIB ended the day 17% (seventeen percent) lower, the index's worst day on record, after a daily decline of the magnitude usually seen over years.

Across the pond, things were equally as ugly, with major indices seeing their worst one-day performances since 1987. The benchmark S&P 500, for example, ended the day almost 10% lower, ending the day well into bear market territory, having fallen more than 20% from its late-February peak. The record-long bull market is now, well and truly, at an end.

Meanwhile, volatility continues to spike, with the VIX -- a 'fear gauge' for the S&P 500 -- reaching its highest levels since the Lehman bankruptcy in 2008. Generally, anything above 30.0 on the VIX indicates significant fear, a level of 76 is almost unprecedented, equating to markets expecting a more than 5% daily move.

Despite the bloodbath in equities, Treasuries failed to hold onto early gains, with yields ending the day higher as bonds sold off with market participants exiting the market completely, and moving into cash. Benchmark 10-year yields closed around 0.9%, up 3bps on the day.

Turning to G10 FX, one of my favourite old adages rung true yet again - 'buy dollars, wear diamonds'; as the greenback found its feet after its recent stumbles, amid a huge scramble for USD denominated funding and liquidity.

As a result of the funding squeeze, the dollar index - which tracks the buck against a basket of peers - surged by more than 1%, rising to a 2-week high.

Some of the dollar's gains were pared late on, however, after the Fed announced a sizeable $500bln term repo operation, and scheduled another such operation for tomorrow, flooding the market with liquidity and lessening some of the funding squeeze.

Nonetheless, the buck managed to hold onto most of its advance, ending the day at the top of the leaderboard: 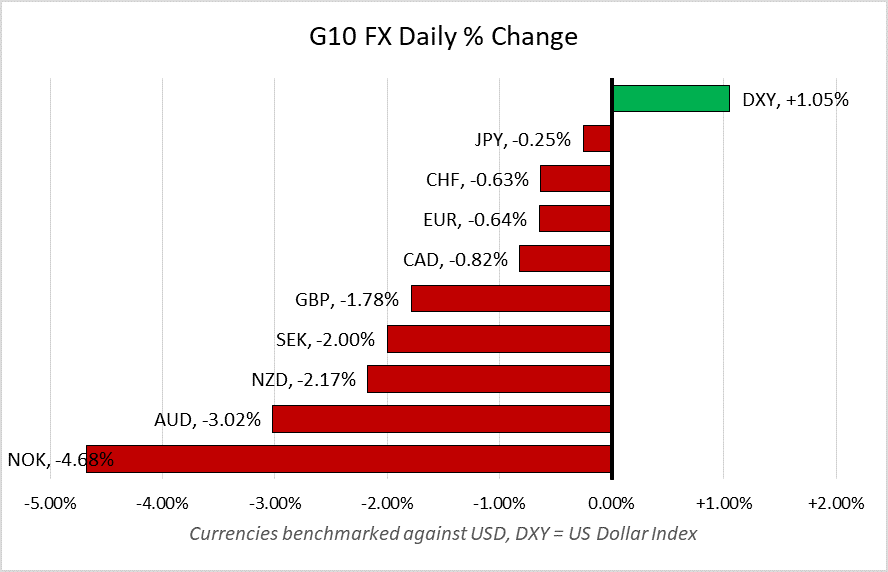 Other majors broke significant levels against the dollar on Thursday.

Cable (GBPUSD) chalked up its biggest one-day decline since October 2016, falling below the 1.28, 1.27, 1.26, and 1.25 handles throughout the day; tumbling below the 200-day moving average, before bouncing from significant support at the 1.25 handle.

Meanwhile, EUR/USD fell to a 2-week low of 1.1055; the Aussie had its biggest 1-day fall in three years; and the Kiwi tumbled by the most in a year.

Safe-haven FX was also interesting, with both the yen and the franc striking a softer tone; though price action wreaked of intervention from the BoJ and SNB attempting to prop up their respective currencies.

Lastly in FX, a word on the NOK, which was in free-fall on Thursday as a result of a major funding squeeze and a collapse in short end liquidity. Expect the Norges Bank to cut rates and increase liquidity in the coming days.

Meanwhile, oil prices continued to crater -- shedding more than 7% - as market participants remained concerned about the coronavirus-linked drop in demand, and potential oversupply.

Finally, before moving to the ECB, you'll notice I've mentioned 'liquidity' and 'funding' a number of times in today's Note. When these terms are mentioned as heavily as today, things are not running smoothly for financial markets.

After Wednesday's lesson from the BoE and HM Treasury in how to deliver a comprehensive coronavirus stimulus package, Thursday saw ECB President Lagarde show us exactly how things shouldn't be done.

The ECB announced a paltry package of policy measures on Thursday, effectively admitting that their toolbox is empty.

For instance, even though the merits of a 10bps depo rate cut further into negative territory are questionable, failing to loosen policy at a time when financial conditions are tightening, credit spreads are widening, the euro is appreciating, and yields are crumbling, is incomprehensible.

Even if a rate cut were purely meant to send a message to markets it should have been done. Any concerns about bank profitability could have been mitigated by tweaks to the tiering system.

As if the measly policy package wasn't bad enough, investors then had to endure one of the most excruciating central bank press conferences in memory, which showed Lagarde to be out of touch, out of her depth, and unable to effectively read the situation that the ECB, and the global economy, presently faces.

Lagarde spent the initial part of the press conference pleading for co-ordinated fiscal support from eurozone governments, before committing a cardinal sin of central banking - hinting that the ECB was not prepared to be the eurozone's 'lender of last resort'.

All it took was the remark, "[the ECB] is not here to close spreads" -- a reference to the widening gap between German and Italian bond yields -- for markets to panic. Casting doubt on the ECB's readiness to be a 'bank of last resort' and preparedness to keep the eurozone together at all costs.

This remark saw Italian bond yields, in particular, surge higher; and the euro tumble by around 100 pips, as investors digested the remarks. Despite later clarification from Lagarde, the damage had already been done, and the Bank's credibility harmed.

Investors went into today's policy decision hoping for a comprehensive monetary policy package, and firm indications of imminent fiscal stimulus, to attempt to cushion the blow from the coronavirus.

Instead, we got nothing of the sort. Draghi's famous "whatever it takes" stance has become simply "whatever".