The latest market highlights and our views on the key developments as equities tumble, bonds rally, oil declines and haven FX remains well-bid with coronavirus concerns sweeping markets for a second straight day

Haven flows remained the name of the game on Tuesday, after a very brief dead cat bounce in risk appetite evaporated, resulting in investors continuing to seek shelter as concerns around the coronavirus epidemic continued.

News-flow surrounding the outbreak was once again heavy yesterday, with there now being more than 80,000 confirmed cases worldwide, including the first reports of cases in Spain, Switzerland, Austria and a host of other nations, as shown on the map below.

As a result of the continued torrent of headlines, market participants continued their rotation into safe-havens, with fear of the unknown - i.e the scale and impact of the epidemic - driving the majority of the sell-off in risk assets.

Speaking of the epidemic's impact, investors continue to reposition for the fallout of the virus, namely re-assessing whether the previously assumed scenario of a 'V' shaped rebound in activity still stands. As time progresses, and the spread of the virus continues at a rapid pace, it is becoming increasingly likely that the impact on the global economy will be more of a 'U' shaped recovery.

For example, with supply chains involving China having already been decimated by the month-long lockdown, attention is now turning to whether Europe will face a similar fate as the outbreak spreads outside Italy.

Further contributing to this re-assessment is the ever-mounting number of companies who are either altering, or suspending, revenue guidance as a result of the virus; with United Airlines and Mastercard the latest to do so. Though quite how any company can issue, and believe they will stick to, present guidance is unclear given the unpredictable nature of the epidemic.

Back to the markets on Tuesday, where we must once again start with equities.

In Europe, it was once again a sea of red, with all major bourses and sectors ending the day in negative territory. 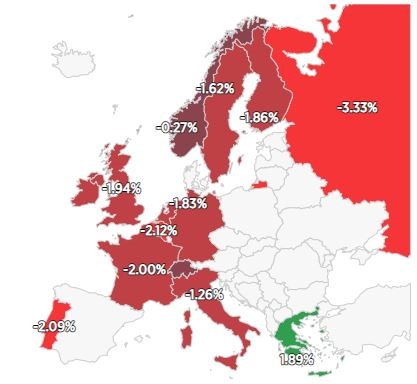 London's FTSE 100 led the losses, tumbling more than 2%, closing at its lowest levels in a year. Meanwhile, the pan-continental Stoxx 600 shed just over 1.8%.

Over in the US, a brief dead cat bounce at the open quickly evaporated, with all three major indices closing the day in the red. The benchmark S&P 500 ended the day just over 3% lower, while the Dow Jones Industrial Average shed 3.14%, bringing the index's decline over the last two days to more than 1,800 points. The tech-heavy Nasdaq was also lower, down by 2.8%, as US markets endured their worst 2-day sell-off since 2015.

Unsurprisingly, all sectors ended the day lower, with the heatmap a sea of red. 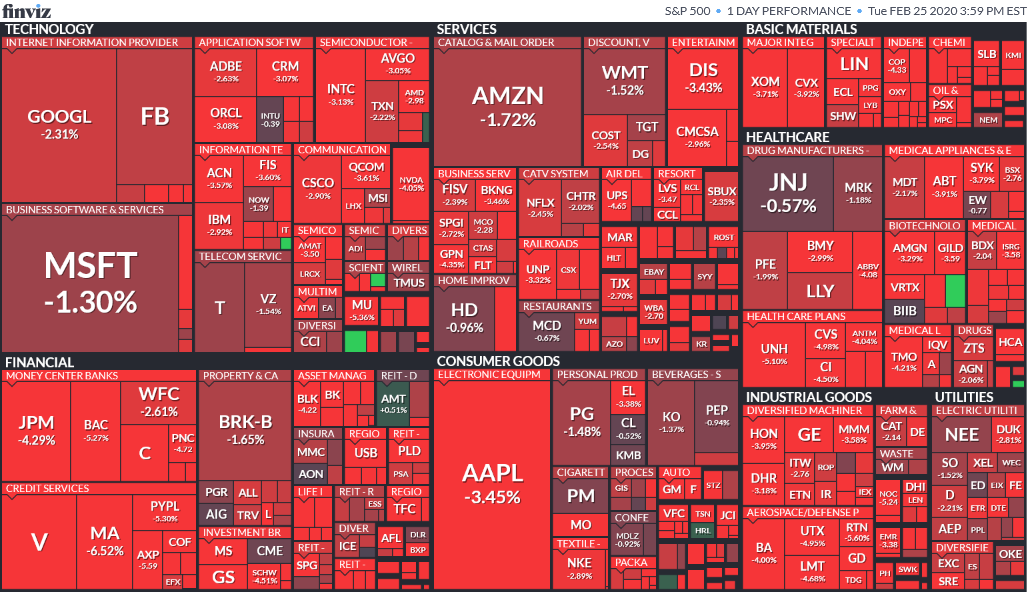 This continued decline in major indices saw volatility remain elevated for a second straight day. The VIX - which could also be considered a 'fear gauge' - surged to a XX year high, above the 27.0 handle.

Interestingly, however, this elevated volatility is not yet in evidence in G10 FX, as the below chart shows - comparing the VIX to EURUSD implied volatility.

Speaking of FX, typical safe-havens remained well-bid, with the Japanese yen the pick of the bunch. The yen ended the day 0.65% higher, practically wiping out last week's steep losses - answering all those who were doubting the currency's haven status.

The Swiss franc also ticked higher, by around 0.2%, though the SNB continue to mount an ardent defence of the €1.06 handle.

Elsewhere in G10, the dollar fell for a third consecutive day, likely as a result of continued outflows from US equities, with the greenback hitting its lowest levels in a week against a basket of peers. This weakness aided both sterling, which ticked above $1.30 for the first time in a week, and the euro, which moved to its best levels in a fortnight, just shy of $1.09.

When it comes to havens, however, there is really no substitute for Treasuries at present. 10-year yields tumbled to a record-low 1.312% on Tuesday, ending the day 5bps lower as flows into Treasuries remained healthy. The long end of the curve also saw significant demand, as 30-year yields hit fresh all-time lows under 1.8%. 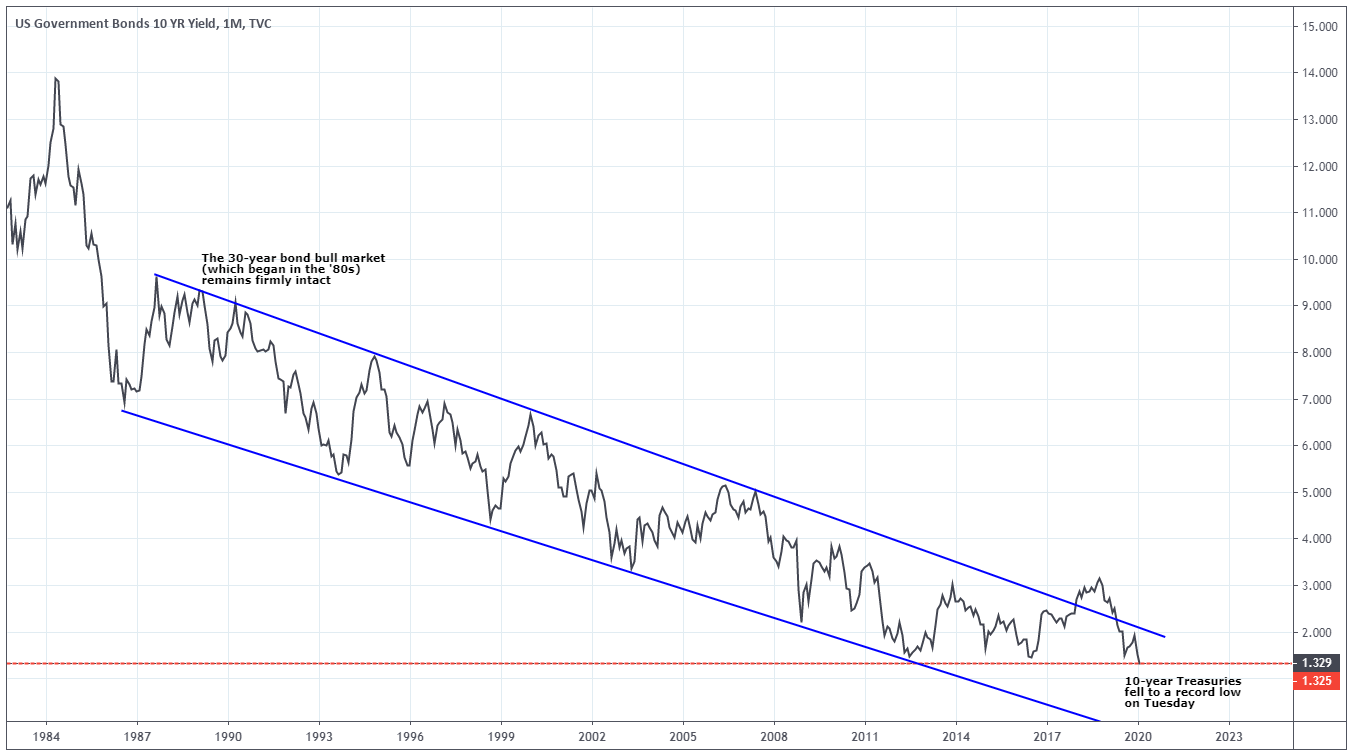 Somewhat perplexingly, the bond rally is not being accompanied by a rise in gold prices, with the precious metal having fallen around 3% since yesterday evening's unexplained sell-off.

Perhaps it is purely a case of more sellers than buyers, though one would expect gold to remain well bid given the ongoing virus concerns.

Sticking with commodities, oil prices continued their recent decline as concerns over a steep fall in global demand continued to exert pressure. Global benchmark Brent ended the day with losses of 2.4%, while US WTI crude settled 3% lower, slipping below $50bbl mark for the first time in two weeks.

Looking ahead, it would appear that the risk-off tone seen in the first two days of the week is likely to continue, given that buying the dip at present is akin to trying to catch a falling knife. Respite from the sell-off, and a rebound in risk appetite, are only likely to occur in a significant and sustained manner once the flow of headlines and the spread of the virus slows.

The data docket is once again lightly populated today, ensuring that risk appetite and sentiment will once again be driven by developments surrounding the ongoing coronavirus outbreak.

Away from the epidemic, here are today's scheduled highlights: