The latest market highlights and our views on the key developments as the Fed slashes rates by 100bps in a surprise Sunday evening move; risk appetite experienced another dead cat bounce on Friday; and coronavirus is set to continue driving risk appetite in the week ahead

FOMC Slashes Rates to Near 0%

Before getting to Friday's events, we must cover the FOMC's surprise monetary policy action, announced on Sunday evening.

Furthermore, in a co-ordinated move with the BoE, ECB, BoJ, BoC and SNB, action has been taken to enhance USD liquidity by reducing the rate charged on existing dollar swap agreements.

This huge package of measures appears, at first look, to be the largest set of measures that the Fed have ever taken in one go. It is clear that policymakers are highly concerned about the impact of the coronavirus on the economy.

Looking ahead, the FOMC have indicated that rates will remain at their present levels until the FOMC is "confident that the economy has weathered recent events". Furthermore, the FOMC stands ready to use its "full range of tools" to support the flow of credit to businesses and households.

The dollar fell sharply in the initial aftermath of the surprise announcement, shedding around 100 pips against most majors. Furthermore, as detailed below, the recent monster dollar rally has been due to a major funding squeeze, both of which are now likely to abate after the FOMC's policy action.

Well, what a crazy, chaotic, volatile week last week was; though I have a feeling it will become a week that we all remember for a very long time indeed.

Before turning to Friday's developments, I feel it's important to take a step back, to look at how the coronavirus pandemic is likely to impact the global economy, and to discuss the ever-growing number of nationwide lockdowns being seen across the globe.

Firstly, the pandemic is - of course - having, and will have, a significant detrimental impact on the global economy. The pandemic is creating a series of 'sudden stops' in both the supply and demand sides of the economy, contrasting vastly with the usual gradual slowdown seen before an economy slides into recession. The pandemic is acting almost like a light switch for the economy, one day the economy is open for business; the next a lockdown has been imposed and the economy is shut down.

Couple this with an impotent monetary policy toolkit after a decade of ultra-loose policy, and general reluctance from governments to swiftly enact fiscal stimulus programmes, the pandemic has the potential to create something of a 'perfect storm'.

The below diagram, which shows how income flows in an economy, illustrates the twin supply-demand shock of the pandemic well: 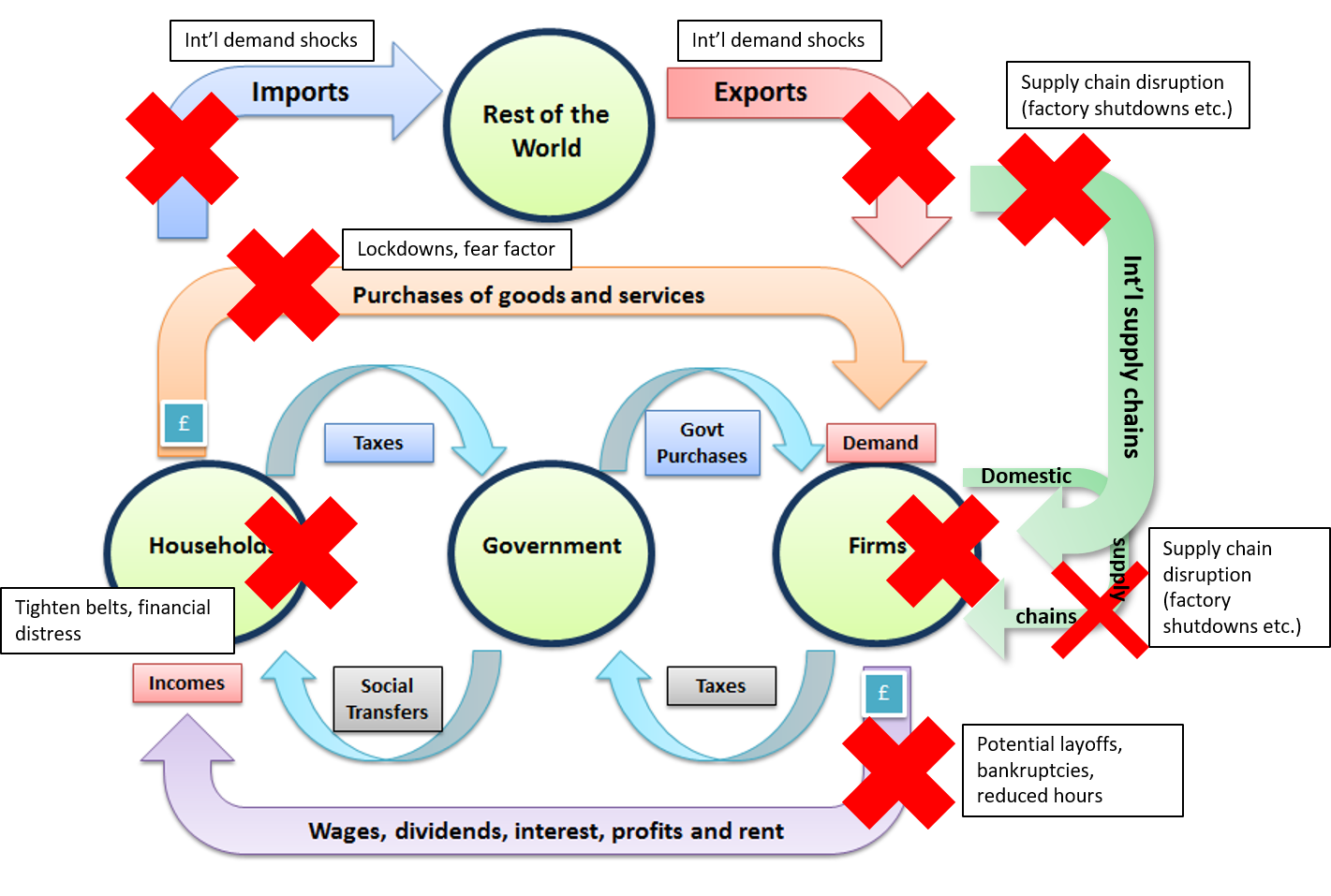 Meanwhile, it is also important to look at how different nations are attempting to control the coronavirus.

China, where the pandemic began, imposed draconian lockdowns in cities, which appeared to bring the outbreak under some semblance of control. Other nations are now following this strategy, with Italy imposing a nationwide lockdown until April, and Spain and France set to follow suit.

Elsewhere, however, the focus is on 'flattening the curve' - both delaying the peak of the outbreak and creating a shallower, but longer, peak, to avoid straining health services.

This latter approach is what's being seen in the UK, where 'social distancing' measures are being implemented, and in the US, which has now declared a state of emergency over the virus.

The problem with widespread lockdowns, as the below chart shows, is that once the restrictions are lifted, the potential for a resurgence of the coronavirus is high due to a lack of immunity in the population. It is, of course, impractical to introduce lockdowns every time the virus rears its head, hence widespread lockdowns now, could be delaying - or even worsening - any potential recurrences of COVID-19 later in the year. 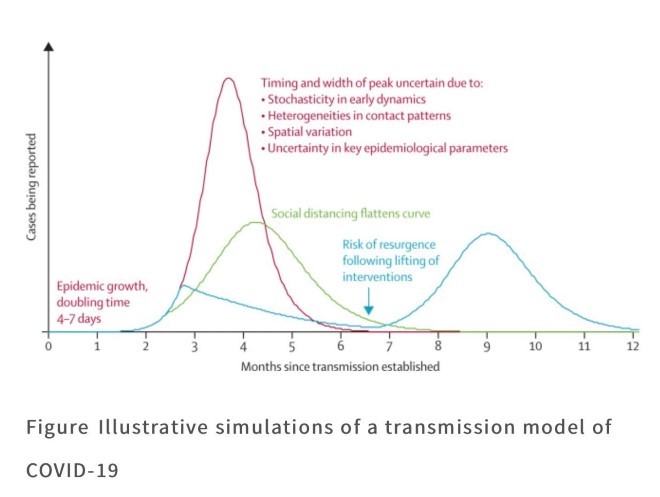 Taking the economic situation into account, and bearing in mind the highly unpredictable nature of the pandemic, as a client said to me last week "the economic consequences are genuinely unforeseeable".

Turning back to Friday, for the second time in the last week, there was a 'dead cat bounce' in risk appetite, as markets rebounded from Thursday's violent sell-off - the worst since 1987.

Starting with equities, European bourses ended the day in the green, though well-below session highs, having failed to hang on to earlier gains. 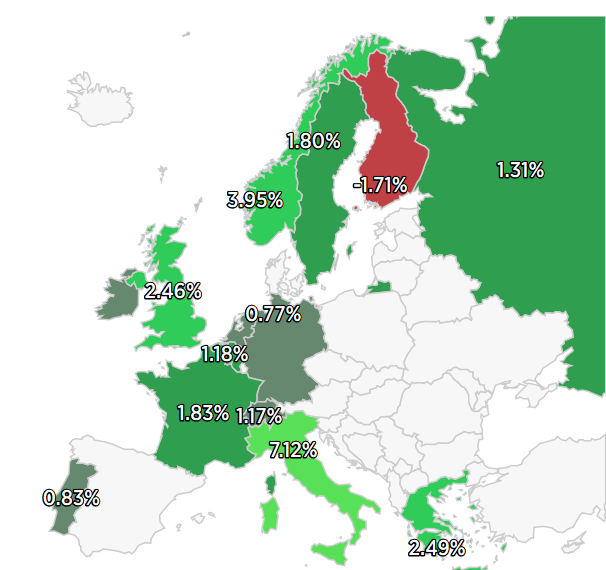 The pan-continental Stoxx 600 ended the day 1% higher, though this hardly made a noticeable dent in the recovery from Thursday's 11% fall, with the index ending the week 18.7% lower - the worst week since 2008.

Meanwhile, London's FTSE 100 ended Friday 2.5% higher, though it is Frankfurt's DAX that is most interesting. At one point, buoyed by reports of both German and Eurozone fiscal stimulus, the index was up by as much as 9%. The index closed just 0.7% higher; clearly, investors remain unconvinced, and the bottom is not yet in.

Across the pond, US markets erased nearly all of Thursday's declines, as all three major indices chalked up their biggest one-day gains since 2008.

The benchmark S&P 500 ended the day 9.2% higher, aided by President Trump's national emergency declaration and reports of additional fiscal stimulus being on the way. Nonetheless, the S&P remains in bear market territory (as shown by the red line below) - after Thursday concluded the S&P's quickest ever plunge into a bear market.

Volatility, however, remained elevated, with the VIX printing as high as 77.6 on Friday - its highest level since November 2008.

Such an elevated level on the VIX corresponds to traders expecting a roughly 5.1% daily move - a magnitude usually seen on a monthly, not daily, basis.

Furthermore, as if to evidence the volatile nature of the last five trading days, three of the daily percentage changes rank among the biggest 20 1-day gains or losses in the index's history, going all the way back to 1957.

Meanwhile, in the bond market, Treasury yields rose on Friday, due to a number of factors. Firstly, the dead cat bounce in risk appetite would have given some call to exit the bond market and rotate back into riskier climbs. Secondly, investors are continuing to liquidate positions, choosing instead to hold cash, resulting in a continued sell-off in every asset class. Finally, there are widespread reports of a major lack of liquidity in the Treasury market and incredibly wide spreads, with one trader even remarking "the bond market is broken".

All of this combined saw 10-year yields end the day 13bps higher on Friday, closing above 1% (a significant milestone given the recent plunge in yields).

The Treasury curve as a whole bear steepened on Friday, with long-end yields rising significantly faster than those at the short-end, though this should be considered anything but the usual sign that the market is pricing in rate hikes.

Of course, the 2s10s spread - which now stands at almost 50bps - tends to significantly steepen just before a recession hits. Perhaps this is in evidence once again?

Turning to G10 FX, and Friday once again saw a scramble for dollars, resulting in a monster bid for the greenback throughout the day, sending the dollar to its highest levels in over a fortnight against a basket of peers.

There appears to be a significant scarcity of dollars in the market at present, resulting in traders scrambling for dollar funding wherever possible, and pushing the price of the greenback higher.

This shortage is well-evidenced by the FRA-OIS spread; the difference between a forward rate agreement (say, LIBOR) and the overnight index swap rate (a risk-free rate). The spread, which indicates (in simple terms) how expensive it will be for banks to borrow in the future, is currently approaching its widest levels since 2009, reflecting tightening financial conditions and a shortage of USDs; both factors the FOMC will likely want to alter come Wednesday. 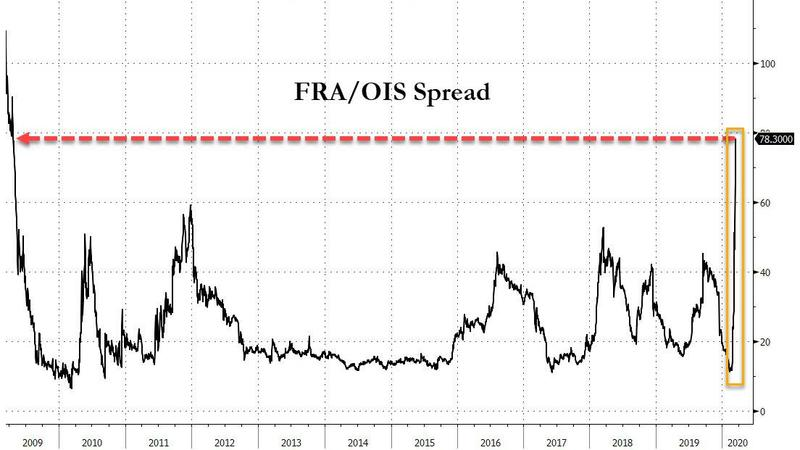 The Fed have, on both Thursday and Friday, attempted to ease these funding pressures by conducting significant term repo operations, though to no avail.

These repo operations - where a dealer will 'swap' securities (usually Treasuries) in exchange for cash (dollars) - would have allowed up to $1tln to flow into the financial system; however take-up was less than 10% of the amount available. This appears to be down to banking regulations meaning that, even if dealers wanted to take advantage of the repo facility, they weren't able to free up enough Treasuries.

As a result, the repo operations did little to stem the dollar funding squeeze - and nothing to stop the dollar's appreciation.

It is, however, important to question why the Fed have decided to offer $1tln in repo over just two days. To put this amount into context, when the Fed were conducting quantitative easing, they purchased $4bln in Treasuries over almost a decade. To try and pump $1tln into the system over two days could be the Fed trying to send a 'we've got your back' message to the market; or could perhaps be a sign of more systemic, sinister, issues at play. Times of crisis often result in skeletons making their way out of the closet.

Nonetheless, the dollar's surge resulted in cable taking a violent tumble on Friday, with sterling falling more than 2% against the greenback, recording its biggest 1-day fall since June 2016.

For the week, cable fell more than 6%, the pairing's worst 1-week performance since January 2009. The pound recorded similar declines against the euro, hitting a 6-month low below the €1.11 handle on Friday.

The dollar's rise also came at the expense of the safe-haven Japanese yen, which ended the day 3.2% lower on Friday, hitting a 1-week high above 108.50.

Other majors also fell victim to the dollar, as shown below: 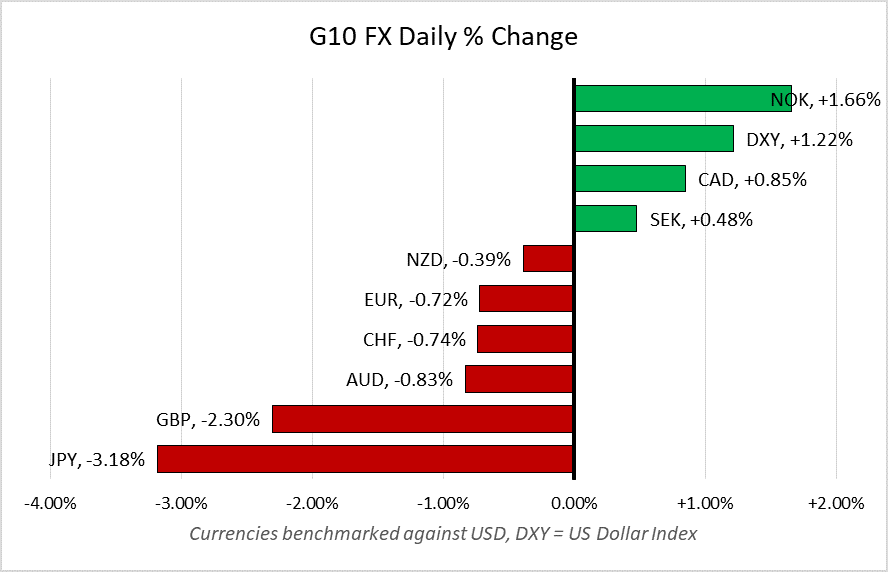 Here, I should note how a surprise 50bps rate cut from the BoC had relatively little impact on the Canadian dollar; while an unexpected 50bps cut from the Norges Bank also had little effect on the NOK, which traded - as usual - in line with oil prices.

Finally, speaking of oil, we should turn to commodities.

Despite the continued threat of oversupply and a sharp fall in global demand, both Brent and WTI settled around 5% higher on Friday, with prices supported by President Trump's announcement that he would be filling the US strategic petroleum reserve "to the very top". This would equate to the purchase of as much as 77mln bbl.

Meanwhile, gold prices continued to sink, tumbling by more than 4% on Friday with - as mentioned above - investors liquidating their positions and choosing to sit in cash instead.