The latest market highlights and our views on the key developments as the Fed's shock and awe Sunday stimulus package sparks panic rather than reassurance; sterling weakens as the UK implements more stringent 'social distancing' advice; and the global policy response to the pandemic is set to remain in focus today

The trading week got underway with a headline-heavy Monday, as investors continued to monitor the coronavirus pandemic, and assess the economic implications of the virus, while digesting the Fed's monster 100bps rate cut on Sunday evening.

Firstly, the headlines, (some of) Monday's major news flow is below:

As for the virus itself, the pandemic continues to spread at a rapid rate, with more than 175,000 cases now reported worldwide.

Importantly, and more concerningly, the number of cases outside China has now exceeded those reported within, while the number of new cases being reported daily continues to grow exponentially.

Turning to the markets, and it was another 'Black Monday' yesterday's, as the Fed's monster 100bps cut and package of stimulus measures left markets in a state of panic, wondering policy levers the FOMC could pull if Sunday's package falls short.

As such, equity markets across the globe once again sold-off significantly.

In Europe, it was again an ugly sea of red, though most bourses ended the day well above session lows. 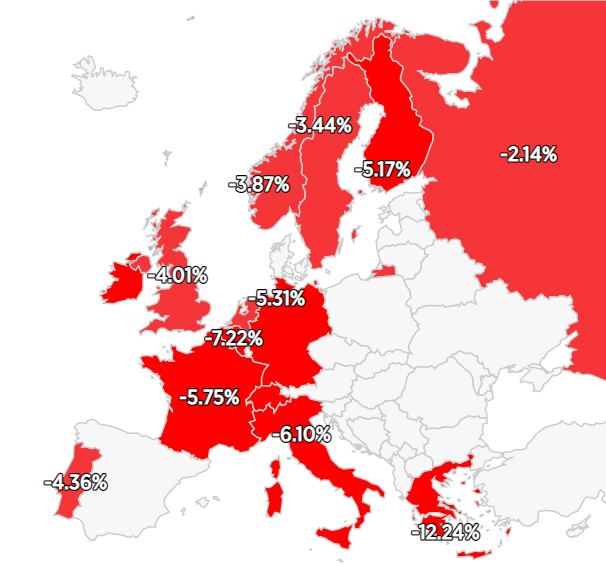 At a broad level, the pan-continental Stoxx 600 ended the day 5.1% lower, having pared around half of its losses by the close. Meanwhile, London's FTSE 100 lost 3.8%, while Frankfurt's DAX shed 5.3%. Unsurprisingly, given the headlines above, travel stocks led the losses, the sector losing more than 10% on the day.

Across the pond, US markets experienced a violent sell-off, with losses deepening after President Trump noted that the US "may be" heading for a recession, while stating that the peak of the coronavirus epidemic may not come until "July, August or maybe later".

The benchmark S&P 500 ended the day almost 12% lower, it's biggest 1-day drop since 1987, surpassing last Thursday's 9.5% decline. Other indices also tumbled, with the Dow Jones Industrial Average losing 12.94%, shedding 3,000 points in a day for the first time on record. The tech-heavy Nasdaq, meanwhile, lost around 12.5%.

Unsurprisingly, all sectors ended the day in negative territory, with the S&P 500 remaining firmly in bear market territory, closing at its lowest level since Christmas 2018.

Meanwhile, volatility remained elevated, with the VIX briefly rising well above 80.0, hitting its highest levels since the Lehman bankruptcy. The 'fear gauge' trading at such a level implies the market continuing to expect a daily move of more than 5%.

Elsewhere, in the bond market, Treasury yields fell in reaction to the Fed's surprise rate cut as investors priced in a long-term low interest rate outlook. Nonetheless, there were still widespread reports of illiquidity across maturities, a factor that will surely be addressed by the Treasury soon.

In G10 FX, last week's run of dollar strength was brought to an abrupt halt yesterday - though this had more to do with the Fed's liquidity provisions than the rate cut itself.

The greenback ended the day 0.7% lower, erasing around half of last week's advance as the funding squeeze began to abate, lessening the upward pressure on the greenback.

Elsewhere, the dollar rolling over resulted in gains for most other majors, with the Japanese yen leading the way as a result of a continued steady bid into safe-havens.

Yesterday's leaderboard was as follows: 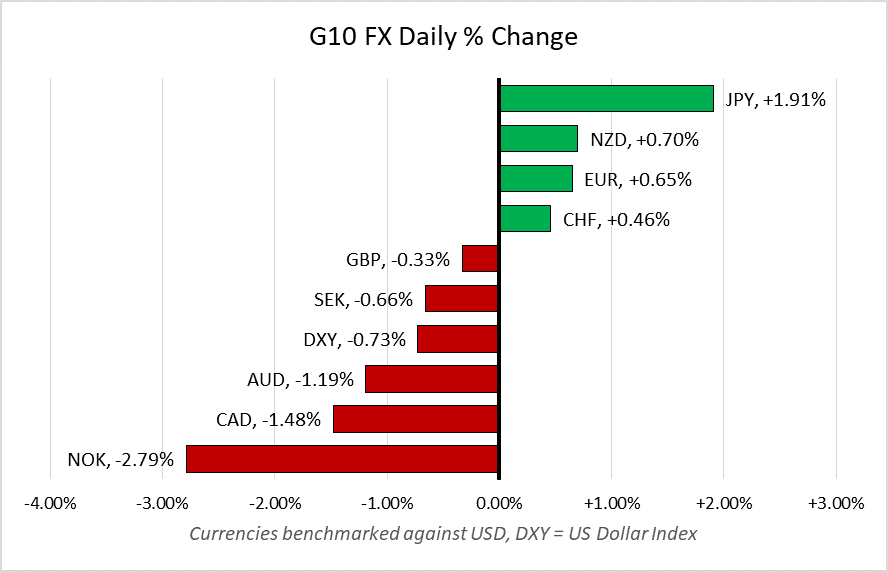 As you can see, sterling ended the day significantly lower - against both the dollar and the euro - extending losses after PM Johnson's press conference as investors began to price in a greater coronavirus-related hit to the UK economy.

Against the dollar, sterling fell as much as 150 pips, at one point hitting fresh 5-month lows just above the 1.22 handle, before paring losses.

Meanwhile, against the euro, sterling shed more than 0.6%, briefly dipping below the 1.10 handle to print its lowest level since September 2019.

Meanwhile, the NZD shrugged off the RBNZ's 75bps rate cut; though its Australian cousin faced headwinds as a result of the softening risk environment, and heavy speculation that the RBA may announce a rate cut and quantitative easing programme as soon as this Thursday.

Unsurprisingly, given the weakness in oil prices (noted below), both the Canadian dollar and Norwegian krone faced headwinds, the latter hitting a record-low against the dollar on Monday.

Finally, in commodities, oil prices cratered as demand continues to evaporate as a result of the ongoing coronavirus pandemic. Global benchmark Brent shed more than 10%, falling below $30bbl for the 1st time in four years; while US WTI crude lost 9.5%.

Meanwhile, as part of the continued 'flight to cash' as investors liquidate positions, gold prices lost well over 1%, despite the precious metal's safe-haven status.