The Fed is expected to keep interest rates on hold when it meets in August after hiking interest rates by 25 basis points in June to a target range of 1.75-2.00%. This is the first time the Fed has targeted interest rates of 2% since 2008.

Another hike is widely expected in September and a fourth is increasingly expected in December. While no changes are expected this month, investors will keep an eye on the Fed’s guidance, which is expected to signal that the Fed remains on track to hike rates later in the year. Overall, therefore, the dollar impact may be limited unless there are any surprises.

Risks: To what extent are trade tensions a serious economic threat in the Fed’s outlook? And the flattening yield curve?

Overall tone: Is the Fed overall still upbeat on the economy? Does it see the labour market remaining strong and signs of ongoing inflationary pressures?

Dot plot: The Fed next updates its Economic Projections in September. In June, the median view shifted from a total of three to a total of four rate hikes this year.

The Consumer Price Index (CPI) is a measure that examines the weighted average of prices of a basket of consumer goods and services, such as transportation, food and medical care. It is calculated by taking price changes for each item in the predetermined basket of goods and averaging them. Source: Investopedia 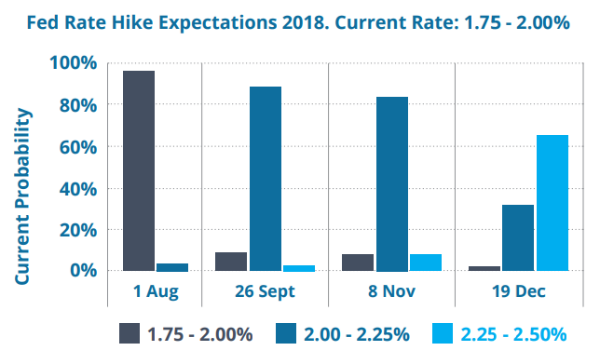 This chart demonstrates the probability that the Fed will hold or raise interest rates at its next four meetings, according to the CME FedWatch Tool on 19.07.2018.